When you're checking on your ceiling blades, you might have found that it needs a change. If you search online, you'll find many blade options to choose from. So, it begs the question, are ceiling fan blades interchangeable? You wouldn't want to purchase blades only to find out they don't work! If that's your worry, we've researched the issue for you.

No, ceiling fan blades are not interchangeable. It will typically depend on the fan model. Blades can only fit their designated model. Otherwise, if you purchase fan blades for your ceiling fan, you'll most likely run into problems.

Of course, situations like these will require more context. For example, why do you need fan-specific blades? In addition, what happens if you install different blades to the ceiling fan? If you want to avoid making a costly mistake, we'll need to go over more details. To learn more, keep reading ahead. 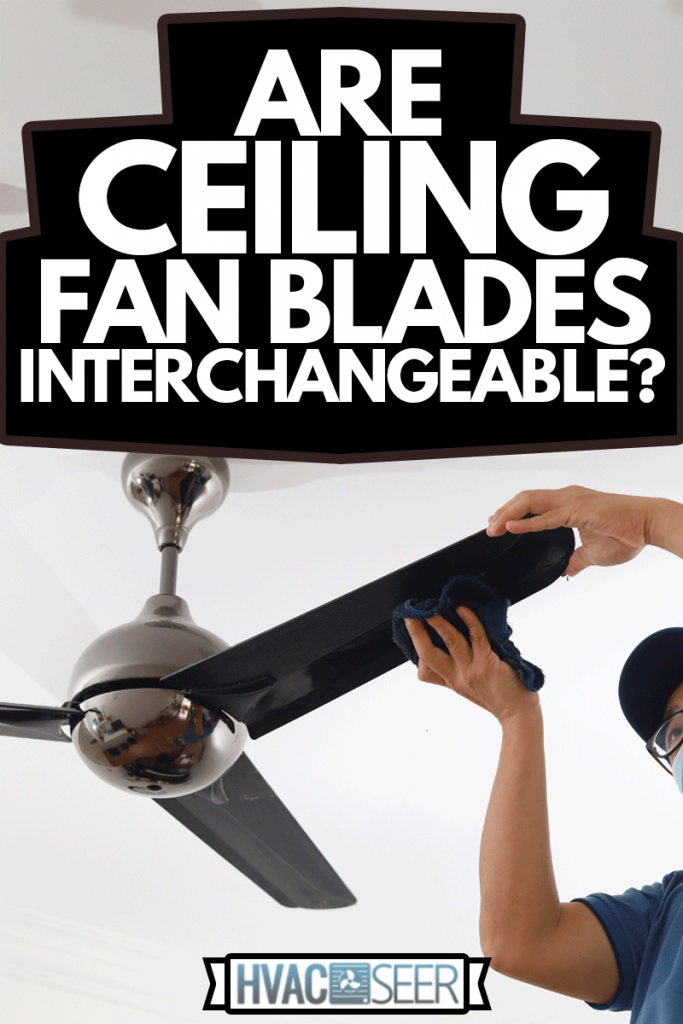 The Anatomy Of A Ceiling Fan Blade 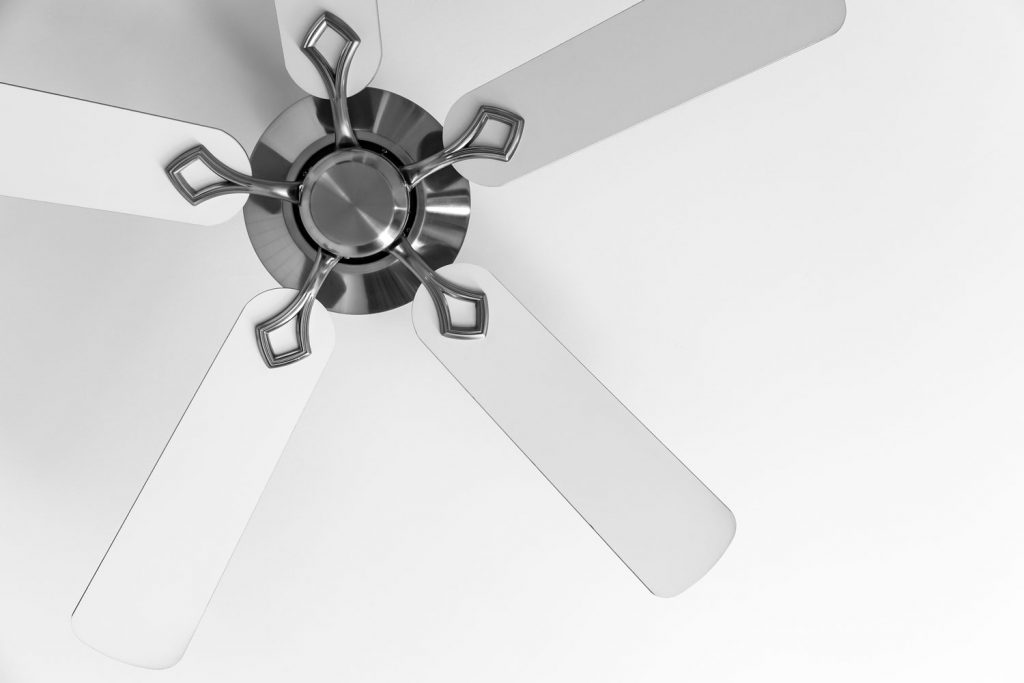 There are a lot of factors that go into determining if a fan blade is compatible with your ceiling fan. Ceiling fans will have different hole patterns, weights, and motors. If you want to ensure you don't waste your money, the simple answer would be to look for your specific fan model.

Let's look at some aspects that determine why fan blades aren't universal.

The first aspect you should consider would be the material of the fan blade. They come in various finishes - from metal, wood, plastic, canvas, and more. As you might already guess, the material will differ in weight.

So, if you buy metal blades for a motor that's supposed to handle wooden ones, it might not perform the same. At worst, you might be overworking it - leading it to fail early.

In addition to their various finishes, they also come in different shapes and sizes. If you look online, you might find blades that resemble leaves. Others might look like flower petals. Lastly, you'll also find standard ones that stick out straight.

The differences between them all would be weight. You wouldn't be able to tell how much weight you're adding to the ceiling fan. Thus, it might mess with the performance of your ceiling fan.

The next aspect to take into consideration relates to the blade span. Ceiling fans will usually come with a blade span of 42 to 60 inches. However, most homes will have ceiling fans that feature 42 to 52-inch blades.

It might tempt you to replace the current blades on your ceiling fan with longer ones. If your reasoning behind this choice is to get better cooling, some suggest that blade span doesn't affect this. Instead, the motor of the ceiling fan has an impact on airflow.

When you place longer blades on a motor that didn't have them originally, you're mostly putting more stress on it. For this reason, many would recommend replacing old fan blades with another set of identical dimensions.

Finally, hole spacing is essential for ensuring you get a problem-free installation. When you purchase a set of replacement blades, you will find yourself in two situations: the set will have pre-drilled holes with standard spacing or, it will have no holes drilled.

If the replacement blades have pre-drilled holes, there's a potential that they might not line up with the mounting bracket of the ceiling fan. Now, you might be thinking the fix could be as simple as drilling the holes yourself. This way, you can line them up to fit.

It's a good solution. But, it needs accuracy. If your measurements are off, even if it's a tiny error, it could make the ceiling fan off-balance.

Now that you know it's risky to purchase a random set of blades to replace your current set, it's time to find out how you can get blades that are guaranteed to work.

If you don't want to waste time and money, the best way to find replacement blades would be to find the brand you own. Once you know the brand, you can do two things.

The first would be to call the manufacturing company to check if they still make blades for your ceiling fan model. The second option would be to search the official website for replacement blades. If you can't find them on their site, you can look on Amazon as a last resort.

Of course, searching would be easier with the model number of your ceiling fan and the size of the blades. In some cases, your ceiling fan can be too old. So, the manufacturer will most likely not have replacement blades in production.

If this fits your situation, it might be time to replace your ceiling fan completely. Otherwise, some would suggest adjusting the blades from a different brand to match the mounting bracket. 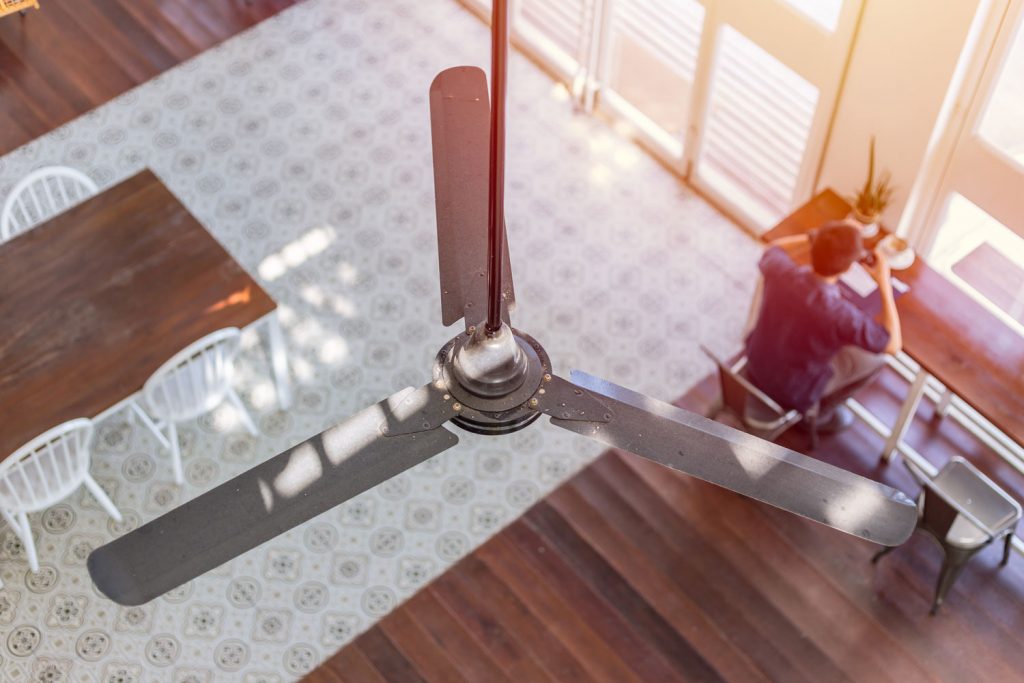 As mentioned, the size of the blade won't necessarily have a significant effect on airflow. But, that doesn't mean you should purchase the smallest blades to replace your current set. Ceiling fan blade size does matter to an extent.

It matters for the amount of air you'll need to move in a room. For example, imagine a ceiling fan with small blades in a large room. It would need to work twice as hard to provide decent airflow.

Conversely, imagine a small room with a ceiling fan that features long blades. Not only does it look comical, but it would also be overkill for the work it would need to do.

How Do I Measure Ceiling Fan Blades? 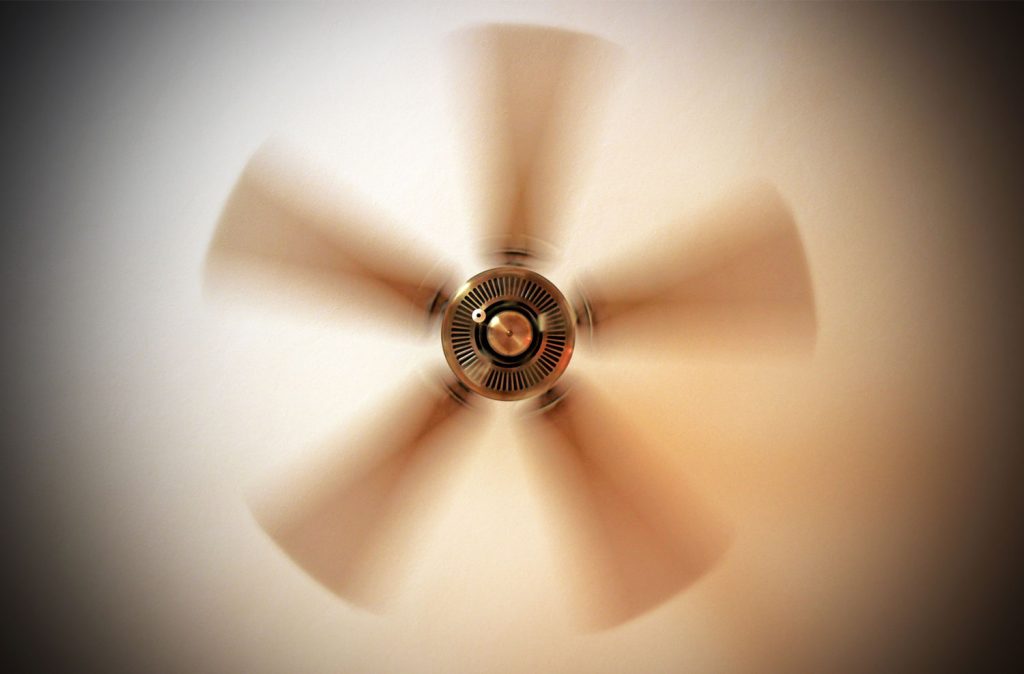 If you want to look for off-brand ceiling fan blades, the first thing you'll need to know is the measurements of your current ones. The process to find this out is simple. Though, it will require a bit of hands-on work.

The first thing you want to do is turn off the ceiling fan. Then, wait until the blades are no longer spinning. An important detail to keep in mind is that you can't go off of the measurement of one blade. For a good fit, you will need to measure the total size of the blade span.

In other words, you'll need to measure the tip of one fan blade to the other end of the one across it. Some of you will have trouble doing this because some ceiling fans will not have perpendicular blades.

When your fan has an even set, you will need to measure the distance between opposing blades. Grab your step ladder and tape measure. Then, measure them from opposing ends. Now, you should have your diameter.

Can I Replace My Ceiling Fan Blades With Longer Ones?

Replacing your old set with longer blades is possible. Though, most would advise against this. Installing longer blades will add more weight. Additional weight can be a problem because ceiling fans will have motors that work efficiently with blades of specific dimensions.

When you add longer blades, the motor might not function the same. In the best case, you won't notice a dip in performance. But, that would be because the motor is working twice as hard. Some DIY enthusiasts warn that it will work temporarily.

But, the damage will be cumulative. So, it will take some time before the motor of the ceiling fan fails. Regardless, you're going to have to replace the whole ceiling fan once it burns out.

What Is the Best Number of Blades for a Ceiling Fan? 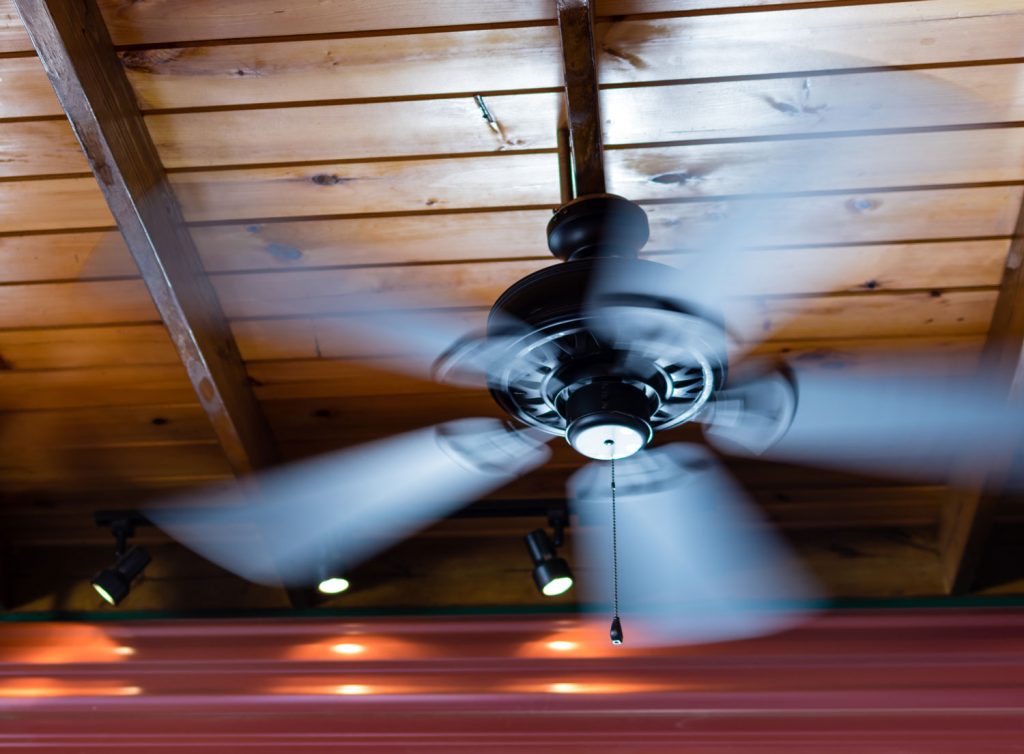 There doesn't seem to be a "best" number of blades for a ceiling fan. In general, some would suggest aerodynamic efficiency isn't the primary concern regarding ceiling fans. Aesthetics also plays a big role in determining how many blades the ceiling fan will have.

However, the consensus seems to be that more blades mean the fan will operate more quietly. It also moves more air. Fans that feature fewer will work more efficiently. In other words, there's less load on the ceiling fan motor.

Can Ceiling Fan Blades Be Painted? 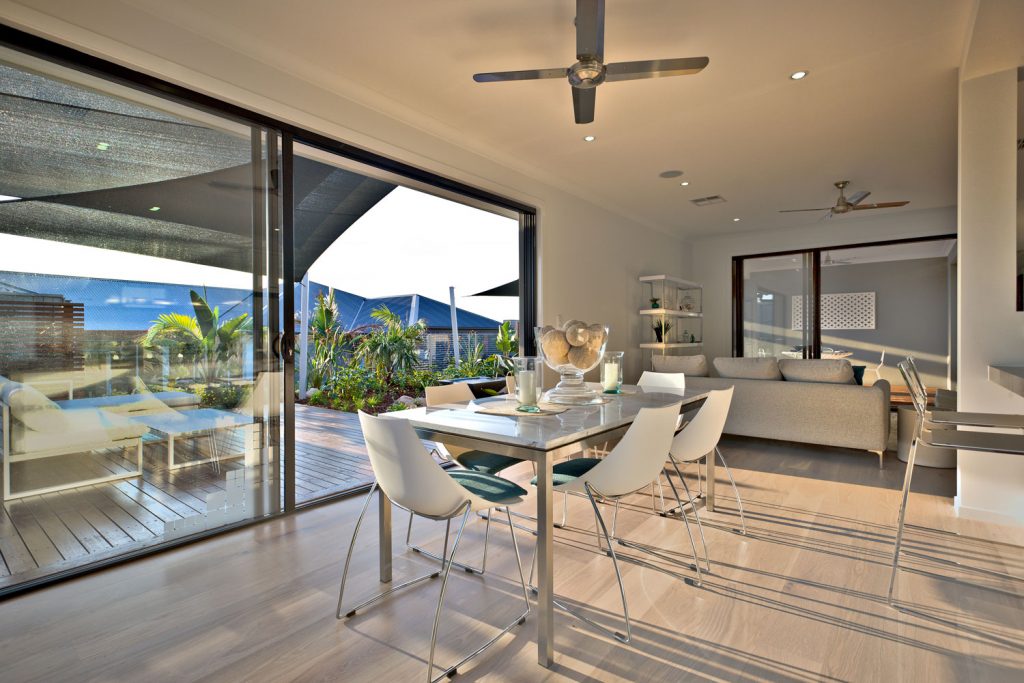 Sometimes we want to reinvent the appearance of our belongings. One way we can do that is by painting them a new color. Can the same be said for ceiling fans?

Fortunately, coloring the fans is doable. Should you want to explore this idea, you'll need to do a lot of messy, hands-on work. However, you don't have to be an experienced painter to do it.

The process of painting your ceiling fan includes taking it down, cleaning it, and messing with primer/spray paint.

Ideally, changing parts should be a simple process. But, due to design, sometimes we need to consider factors. Otherwise, we might hinder the performance of the ceiling fan. We hope you found the information above helpful!

Do you need to lubricate the ceiling fan? If you're planning to use WD-40, check out our post:

How To Remove Cellulose Insulation

Damp Basements Walls- What To Do?

What Is The Ideal Basement Humidity?

Does Vinegar Stop Condensation On Windows?

Can You Cut Or Bend A Flame Sensor? Should You?