A radon pipe helps draw the radon from the soil and vent it outside. But should this pipe have bends? We researched the topic to bring you an answer.

Radon pipes can have bends. But they should have the least bends possible to enhance proper airflow. Also, avoid installing sharp bends as they reduce the pipe's efficiency in drawing the radon from the soil since they constrict the airflow.

Keep reading to find out more about radon pipes. We will discuss if it's advisable to cover radon pipes, their ideal size, and why radon pipes can make gurgling sounds, among other topics.

Should Radon Pipes Have Bends?

A radon mitigation system may be comprised of radon pipes and an inline radon fan. The fan continuously draws radon from the soil and vents it outside via the lines.

Because the pipes extend from the lowest part of your home to above the roof's edge, bends are inevitable, especially when there is a long distance between your home's foundation and the roof.

But it is best to use a minimal number of bends to increase the system's radon mitigation efficiency.

In addition, avoid affixing sharp bends. The sharper the turn, the more resistance the airflow has to counter, thus reducing the system's effectiveness. Angles of 45 degrees are ideal since they reduce friction.

You want to ensure that air flows freely through the pipes, thus creating more room for the radon to flow into the lines and out of the building.

Ensure that you comply with EPA guidelines when choosing an ideal location for radon vent pipes. These pipes should be at least 10 feet above grade. In addition, the lines should rise at least 10 feet away from building openings to keep the radon from re-entering the building.

Also, remember to support vertical radon pipes every eight inches and every seven inches for pipes that run horizontally. 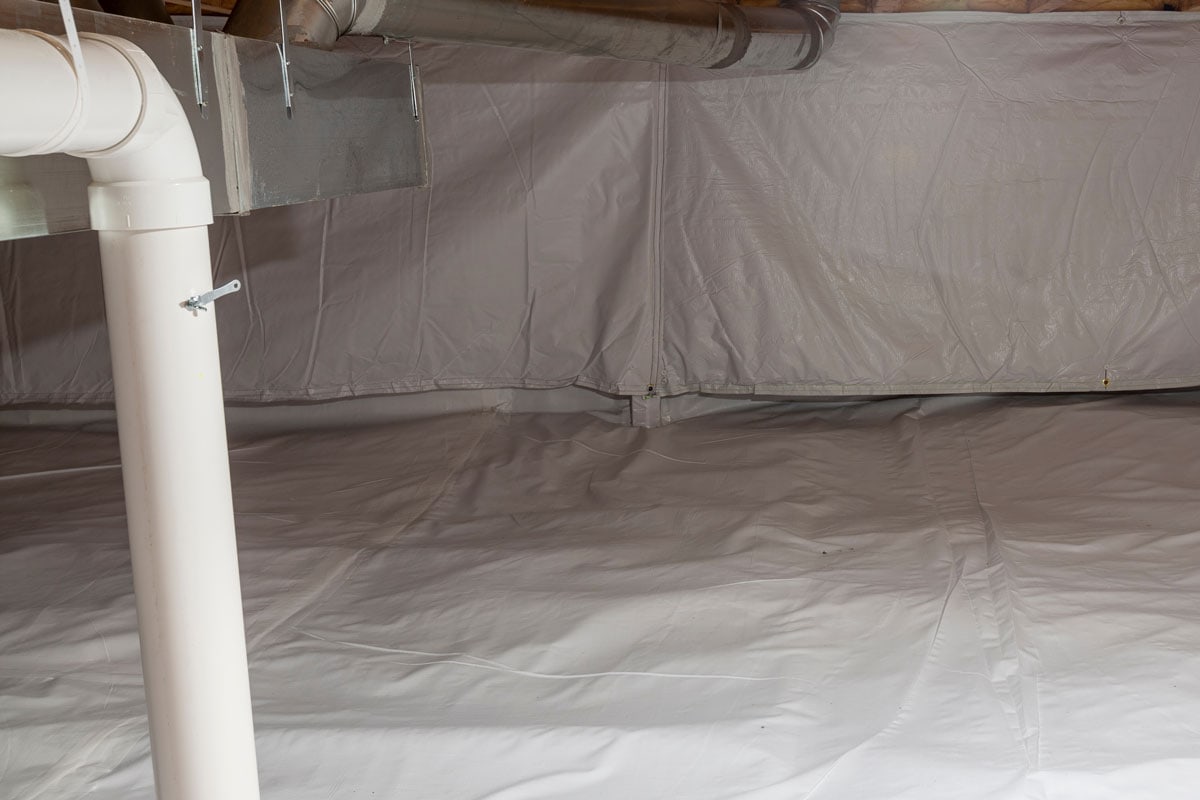 What Kind Of Pipe Should You Use For Radon Mitigation?

These characteristics make PVC schedule 40 pipes suitable for use in a radon mitigation system: 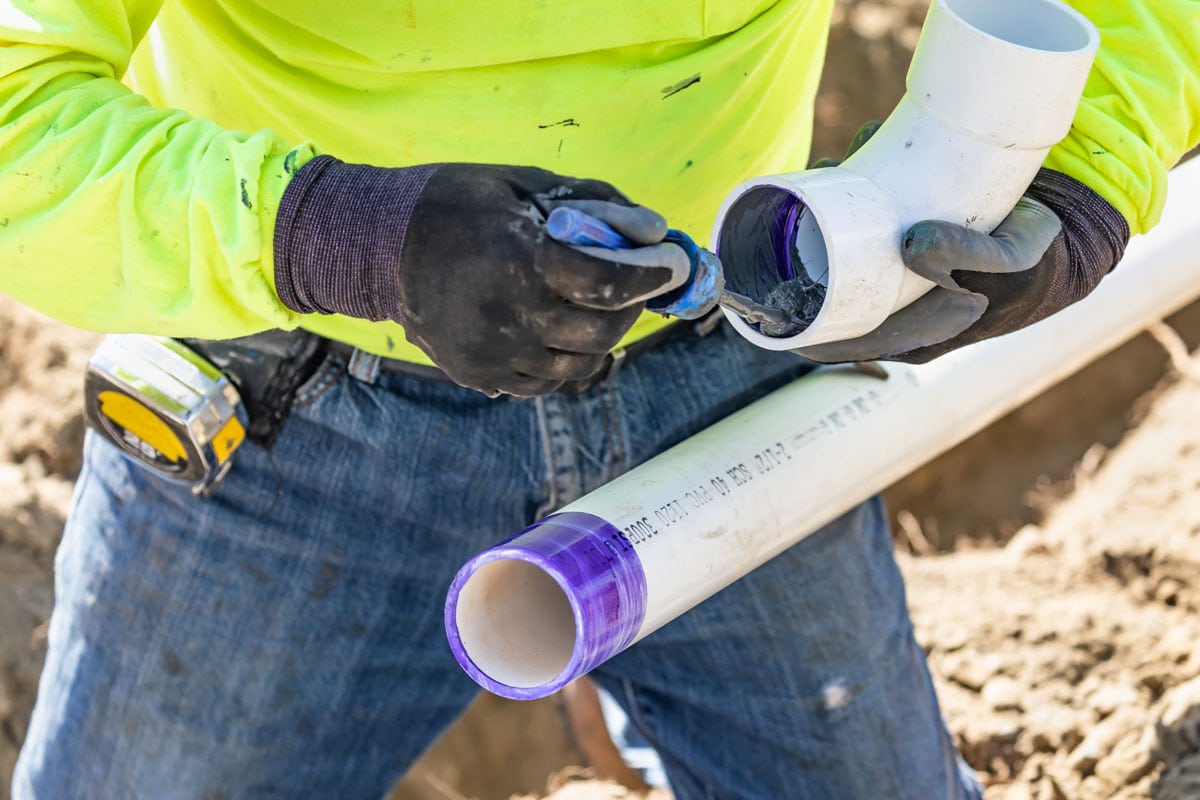 The smoothness of pipes influences how freely air flows through them. So you want to ensure that you use a tube with a smooth inner lining to reduce airflow resistance and facilitate more radon elimination.

Pipes installed in radon mitigation systems should be durable and not susceptible to damage so that you don't have to replace them.

PVC schedule 40 pipes are not easily damaged since they are resistant to abrasion and corrosion, and many chemicals don't affect them.

The pipes you choose should also be able to withstand drastic temperature changes. This trait is crucial for outdoor radon mitigation systems that are installed in areas with extremely hot summers and very harsh winters.

Temperature fluctuations can cause the pipes and couplings to loosen or tighten, thus altering suction and exposing you to a possible radon leak risk. You want to ensure that the tubes remain airtight to keep radon from leaking into your home.

Thick PVC schedule 40 pipes are sturdy. They will remain rigid and retain their shape despite drastic temperature changes.

What Size Should Radon Pipes Be?

Radon pipes can measure three or four inches. Your choice will depend on factors such as system performance, ease of installation, aesthetics, and costs. We compare three- and four-inch radon pipes below. 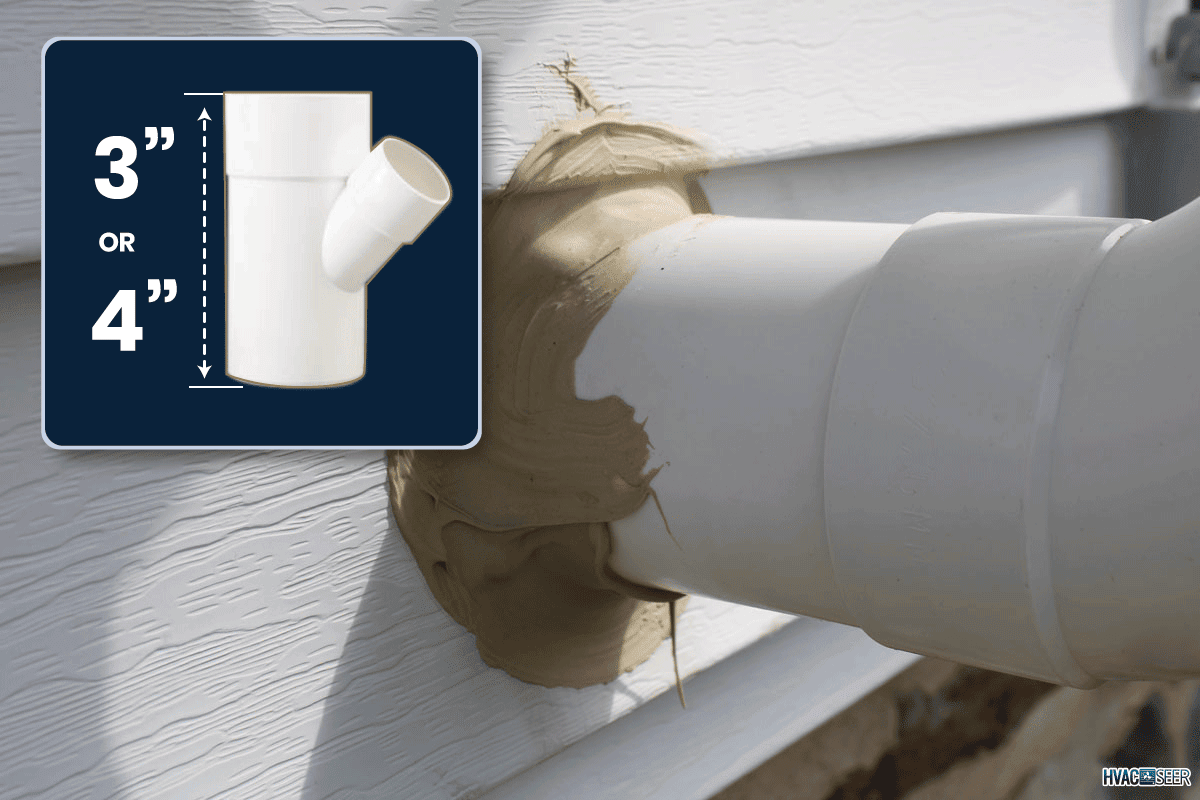 It is easier and cheaper to install a three-inch pipe than a four-inch one since its fittings are smaller and more affordable. Additionally, four-inch pipes cost more.

Generally, installing radon pipes during rather than after construction reduces the overall operational costs.

Three-inch pipes offer better chances of a more aesthetically appealing set-up since these pipes are easier to tuck inconspicuously into a corner.

In contrast, a four-inch pipe guarantees better system performance if the average airflow exceeds 100 cfm. You can expect higher-than-normal airflow rates in homes with walkout basements since more air enters the basement compared to a fully buried basement.

Homes with very large slabs are also likely to have elevated airflow rates since the larger perimeter provides a more extensive surface through which air can seep into the house.

Also, if you are concerned about the noise levels in your radon system, use four-inch pipes. Lower air velocities make them quieter than their three-inch counterparts. Lower air velocity also allows water to drain freely, thus keeping the lines from freezing.

Four-inch pipes give you more flexibility when choosing an inline radon fan. You want to ensure that the negative pressure difference created primarily draws radon from the soil rather than the conditioned air in your basement. 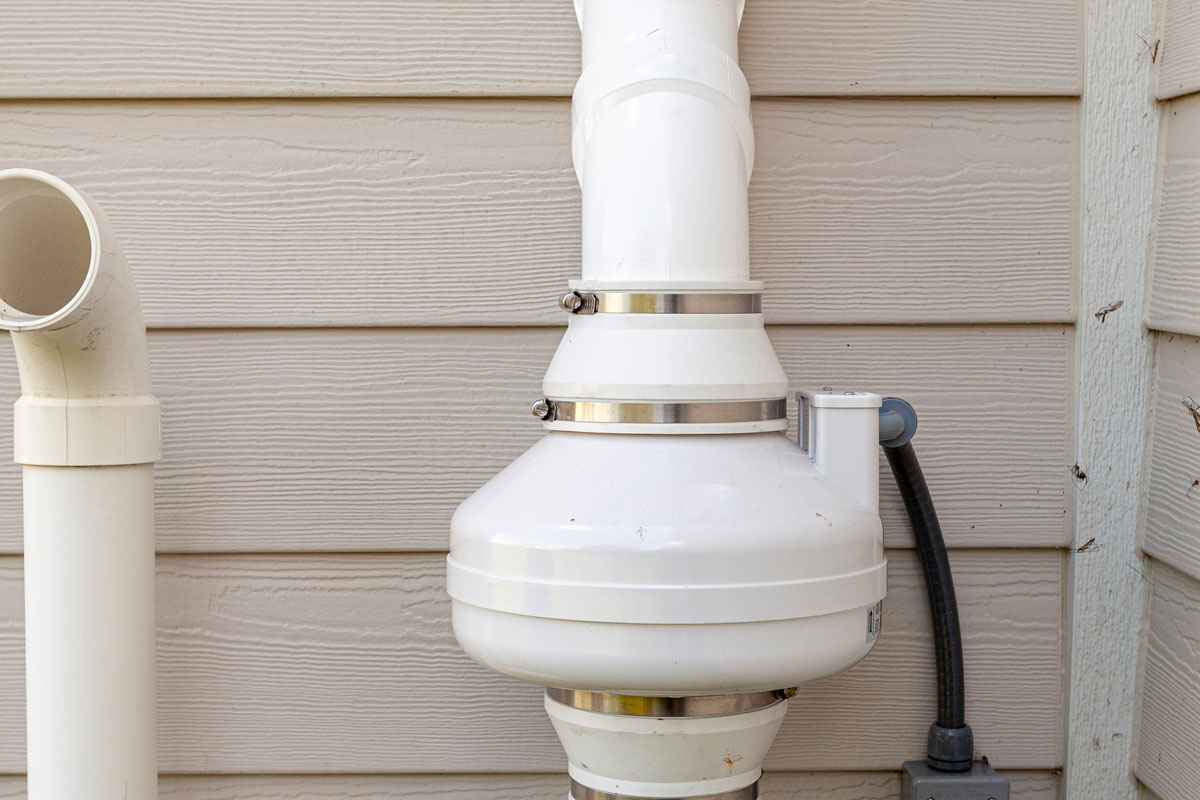 The most important consideration when sizing an inline radon fan is its pressure field extension. Factors such as the size of a building, type of foundation, and current radon levels come into play when determining this pressure field.

Because determining the pressure field can be challenging, it is best to contact a certified radon mitigation specialist for advice on the best fan size for your radon system and home.

Note that you don't have to install radon fans during construction. But you can plan accordingly, so it becomes easier to add one in the future if the need arises. You may also need to change the radon fan size to ensure that it meets your home's radon mitigation needs.

You can read this post for more information: What Size And How Many Radon Fans Do I Need?

Can You Cover Radon Pipes?

You should not cover the top of radon vent pipes since this can interfere with the airflow rate. Furthermore, some states prohibit covering the top of the pipes.

If you cover the radon pipes, you increase resistance to airflow. In some cases, the radon can flow downwards, seeping into the home and exposing your household to the toxic effects of inhaling radon.

You should not be concerned about rainwater entering your radon vent pipe because the pipes can handle moisture. Moreover, any water that enters the radon pipe drains into the drain tile beneath your home.

Installing rain caps can promote ice formation when it starts snowing, thus leading to clogging. Since the outdoor temperature is cooler than the air flowing in the pipes, condensation can form below the rain cap.

As the condensation builds up, it freezes, creating a barrier through which air cannot permeate. Ice formation will render your radon mitigation system useless.

Air velocity in an active radon mitigation system discourages small animals, like birds, from coming near the pipes. But to be safe, you can install a small screen, measuring about 1/4-inch, on the end of the radon vent pipe to keep the animals out.

Constant airflow within the pipe also deters leaves and other debris from entering the line. If dirt or debris enters the tube, the rising air will blow them out. 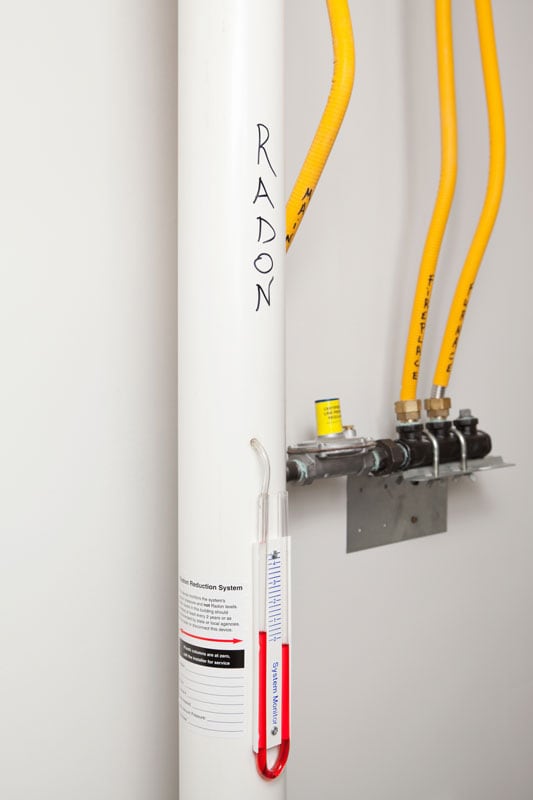 A gurgling sound coming from a radon pipe implies that the pipe is full or partially filled with moisture. The problem may be prevalent in systems with P-traps within the piping because water can get stuck there.

The soil gases flowing through the radon pipes also contain moisture. Condensation can occur if the gases flow through cold spaces. So the pipes can make gurgling sounds if the condensate fails to trickle back into the soil.

Running the pipes through conditioned spaces reduces condensation. So insulating the attic space is ideal since it minimizes condensation and maintains upward gas flow.

In addition, it is best to slope the piping back to the suction pipe at a minimum angle of 1/8 inch per foot. This angle promotes proper drainage of any condensate. 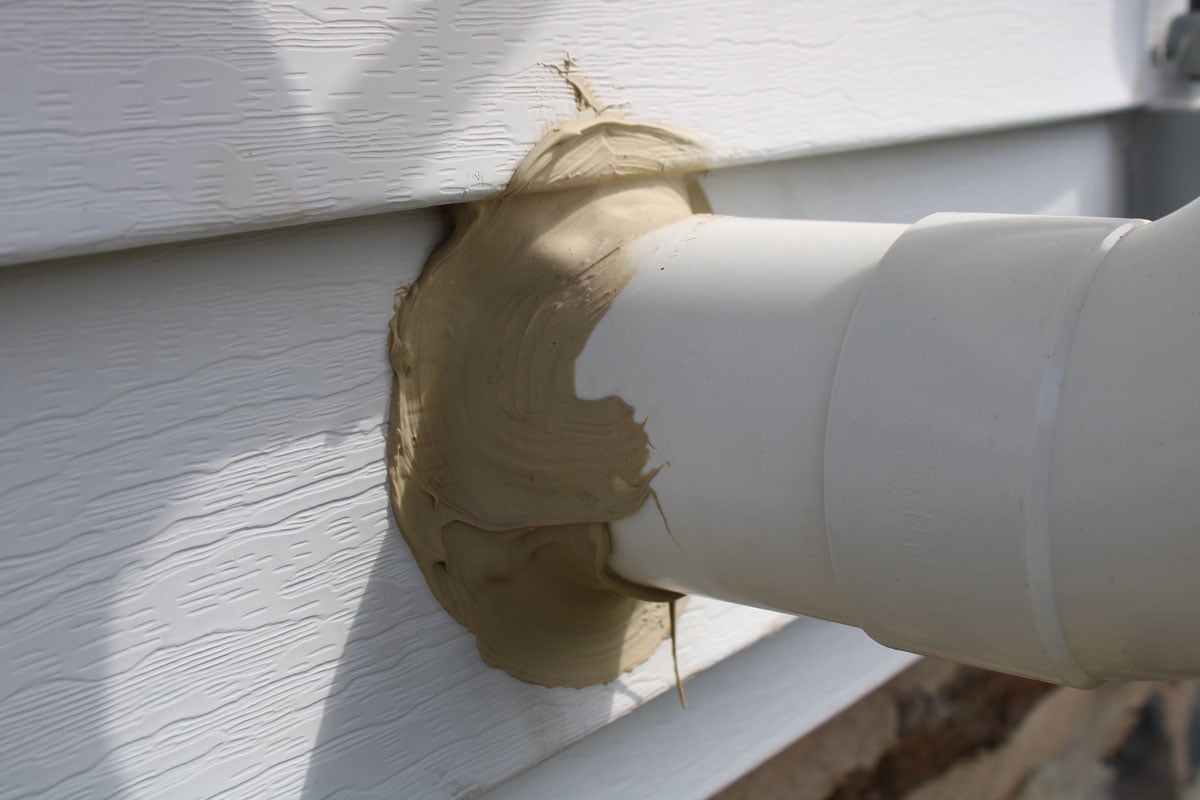 You can incorporate bends in your radon mitigation system. However, using the least number of turns possible enhances airflow. Also, remember to incline the angles at 45 degrees to reduce friction within the pipes to keep the air flowing.

Use PVC schedule 40 pipes that measure three or four inches for your radon mitigation system, and avoid covering them to prevent clogging. Running the lines through a conditioned space and appropriately sloping the piping can also help manage condensation within the pipes.

If you found this post helpful, check out this related article:

Should You Buy A House With A Radon Mitigation System? [Important Considerations!]

Thermostat Says Auxiliary Heat On – What to Do?

Can Heated Floors Go Under Carpet?

Can You Paint Foam Board Insulation?

How To Cover The Space Above A Window Air Conditioner

AC Contactor Not Pulling In – What Could Be Wrong?