You might be wondering if you can use R-22 in a 407C condenser. Well, don't spend too much time searching because we've researched the answer to this question for you.

Technically, you can use R-22 as a refrigerant for the R-407C condenser unit. However, in terms of legality, the United States government has already prohibited the manufacture and use of R-22. So, there are other options you can choose from for your 407C condenser. See below the alternatives:

In this article, we'll talk about condensers, refrigerants, and everything in between. We'll figure out if you can use R-22 in a 407C condenser unit and how this affects the ventilation. Let's not waste any minutes. Join us in reading! 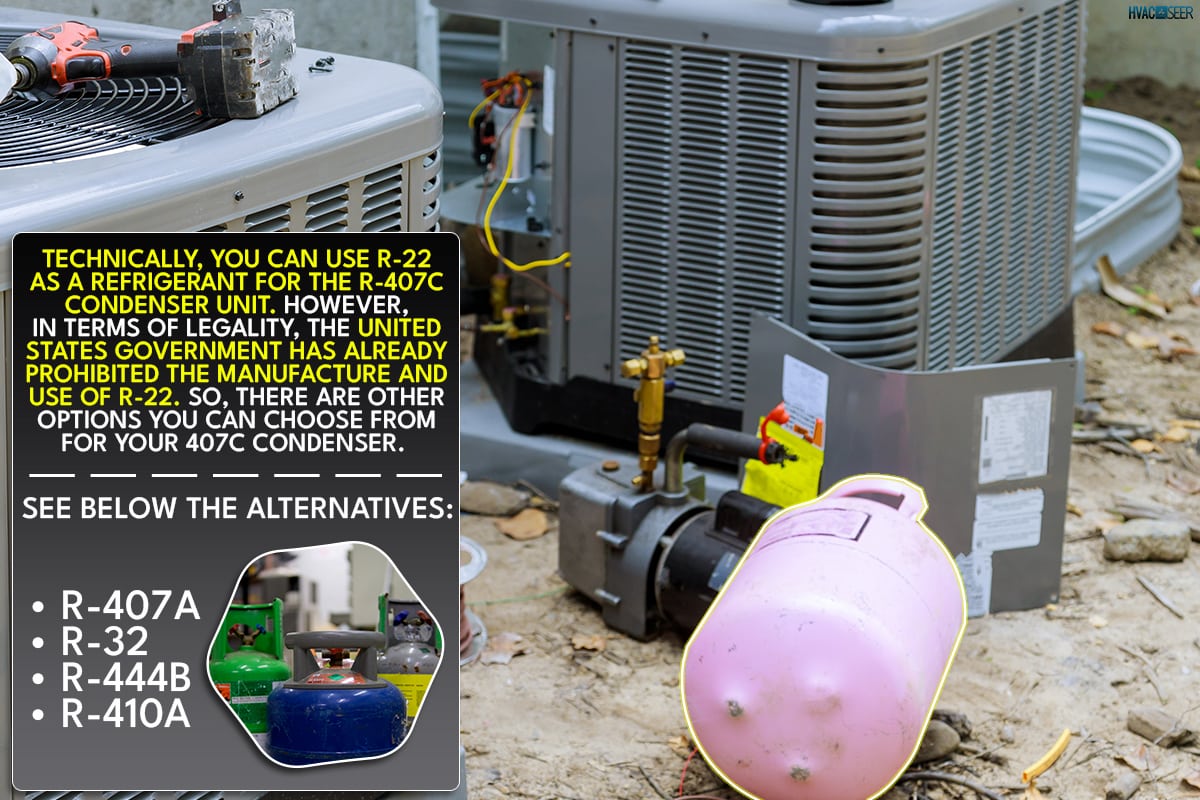 The 407C, also known by other manufacturers as R-407C, is a refrigerant suitable for low-energy operating condenser units. It's less expensive compared to other refrigerants and is an easy replacement option. R-407C is good for pairing some tin-coated copper evaporated coils. 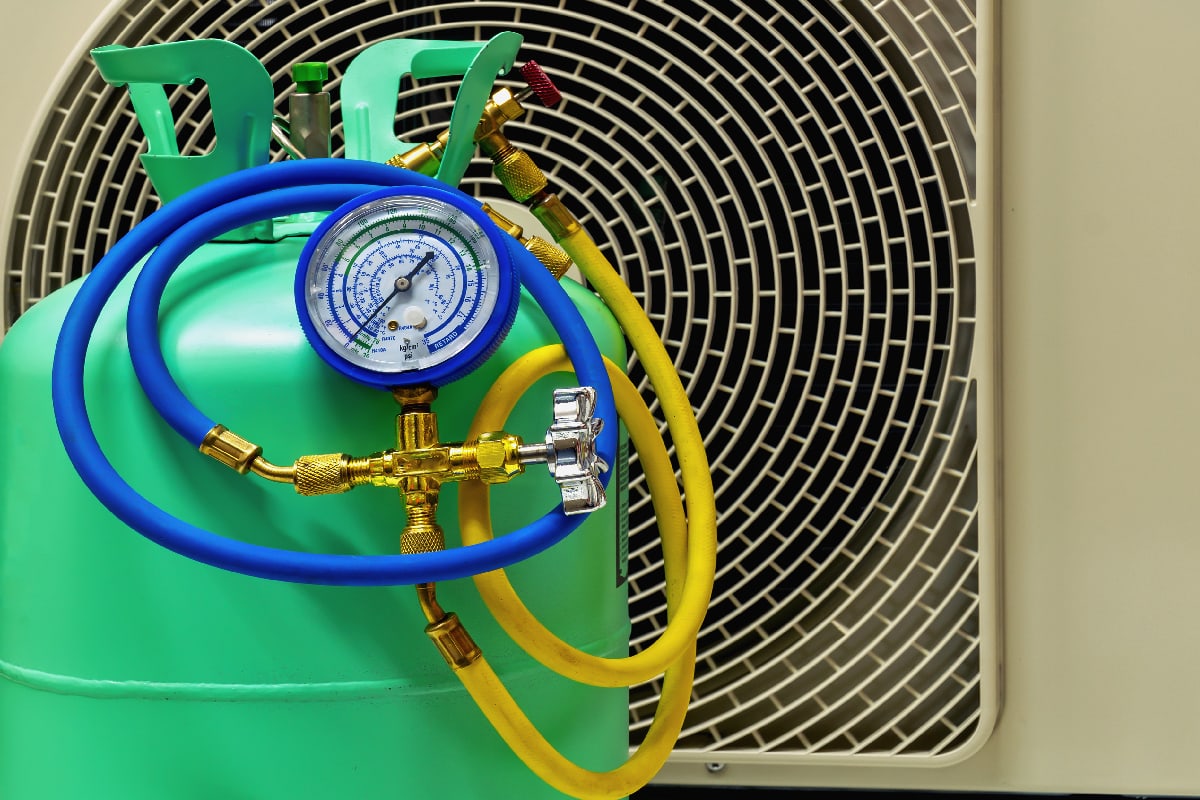 There are condenser units made specifically for R-407C. This is to ensure correct sizing and good performance during operation.

On the other hand, R-22 is a refrigerant used in most HVAC units, including air conditioners. As a brief explanation, refrigerant circulates in an HVAC unit via motors such as the evaporator and condenser. The refrigerant then switches from liquid to gas continuously, resulting in a cooler temperature.

R-22 can function in an R-407C condenser, considering that you consult an HVAC expert before switching refrigerants. A sudden change in refrigerant can damage the motor and render the unit ineffective.

However, the U.S. government ordered to stop the production and use of R-22 due to some health and environmental issues. But there are other alternatives to R-22.

Keep in mind that a change of refrigerant should undergo proper assessment approval from an HVAC expert. Switching to another refrigerant could cause serious damage to the unit. You can also ask the manufacturer for recommended refrigerant you can use.

In general, R-407A is used in medium to low refrigeration systems. It has a lower GWP, or Global Warming Potential than other refrigerants. R-407A is environmentally less risky.

However, you should use R-407A in the correct unit size to allow proper temperature regulation. For instance, it could lose efficiency when the temperature drops below -20 degrees Fahrenheit.

It's an organic, colorless gas that has a low GWP. R-32 uses synthetic oil and requires less charging compared to other refrigerants. However, its toxicity level is quite high. So, you need to use it carefully to prevent the HVAC components from getting damaged. 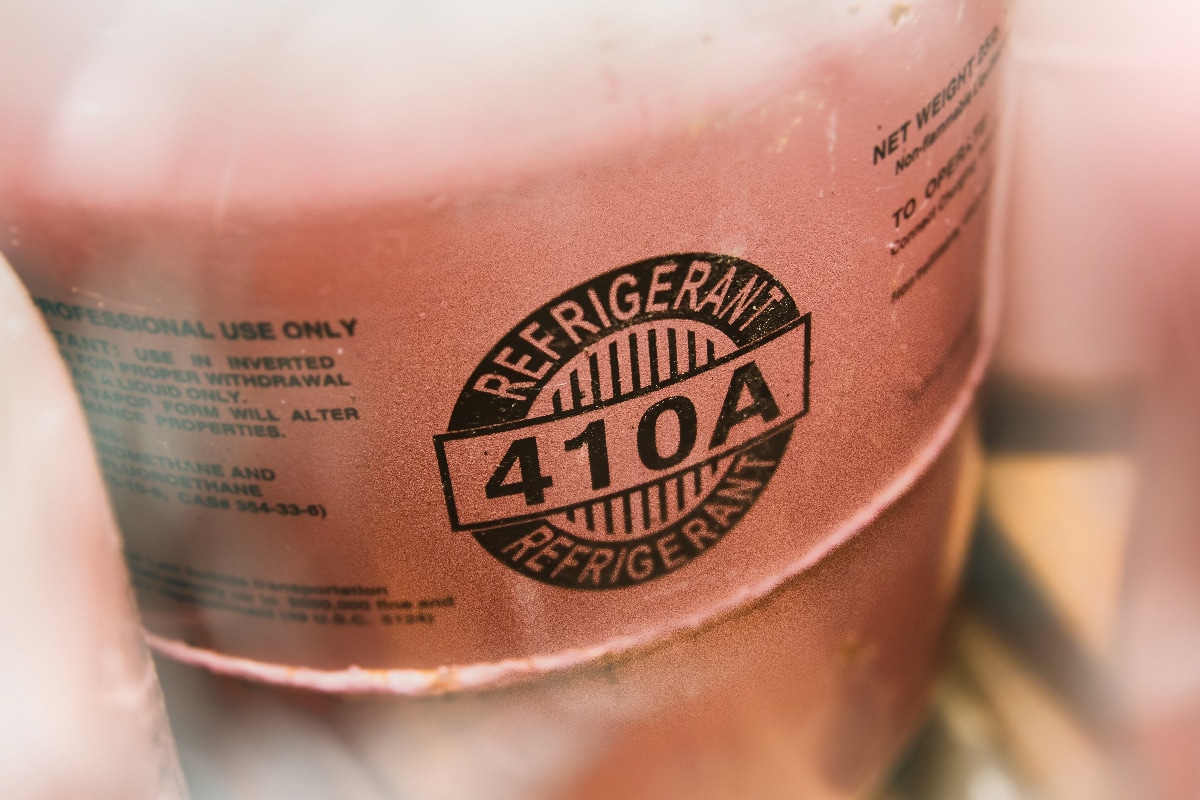 The R-410A absorbs more heat, allowing the air conditioning unit to cool down the temperature more efficiently. However, there is news that authorities will prohibit the use of R-410A due to its high GWP. So, you better be ready with other refrigerant options if the government phases it out for the next few years.

It's a mildly flammable refrigerant that offers similar properties to R-410A. The R-454B refrigerant is good to use for chillers and heat pumps. It's also considered a direct replacement for R-410A due to its lower GWP of 78%.

Some of the refrigerants, including R-407C, are said to be phased out by the year 2024. It can be due to high GWP that harms the environment. However, some exceptions may apply. So, it's good to stay updated on news like this.

Can a Condenser Unit Run Without Refrigerant? 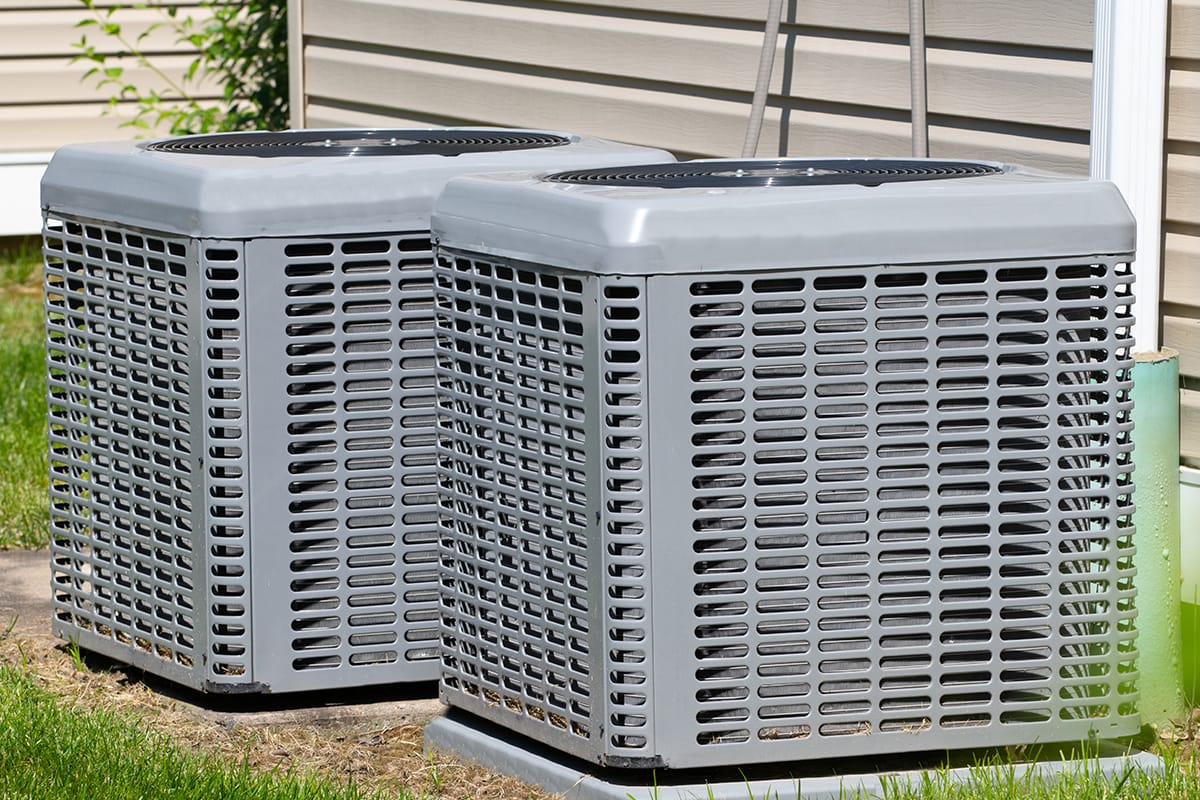 The short answer is no, a condenser unit cannot operate without refrigerant. A condenser is a significant part of an HVAC unit, like an air conditioner. It's connected with other motors, such as the evaporator.

The condenser's main purpose in air conditioning is to absorb the gas from the compressor and convert it into liquid. The refrigerant in a liquid state will then run through condenser coils to allow the fan to release cooler temperatures. So, using a condenser without refrigerant will cause damage to the unit.

It's suggested to do the liquid charging for R-407C to prevent system failure, as value charging may result in poor performance.

It's best to let a professional charge the refrigerant to avoid serious harm, such as toxic inhalation. The steps might differ depending on your unit's model. However, you can refer to the general steps below:

With regards to the steps in charging the refrigerant, you can watch a video here:

How Often to Recharge Refrigerant?

Recharging the refrigerant once every two to five years is a good idea. This is to ensure continuous performance in an optimal state. However, the recharge may depend on how frequently you use the HVAC unit. The refrigerant can get empty too early if the unit runs for so long. On the other hand, refrigerants can last longer under proper use and monitoring.

How to Detect Leaking Refrigerant?

See below such signs.

Leaking refrigerant will lead to poor cooling performance, since there's no substance that converts the hot temperature into cooler air. Insufficient refrigerant will render the unit ineffective, which can also lead to a higher electric bill.

If the air smells so weird, then it's a sign of leaking refrigerant. You should quickly turn off the unit to stop it from releasing toxic chemicals. Also, the unit may flash a warning to indicate a leaking refrigerant, but it depends on unit's model and brand.

The motors will still continue to work despite having a refrigerant leak. This will make them overheat and cause serious damage to the unit due to friction from the motors vibrating against each other.

You may also see the coils freezing because the condenser doesn't function well without refrigerant. So, the remaining refrigerant in the unit will freeze due to a lack of pressure to condense it.

Refrigerant leaks will melt the ice building up on coils. That's why you might see water pouring down the unit. You should ask an HVAC technician to refill the refrigerant, as leaving the unit that way may cause electrical shock.

Can You Mix Refrigerants? 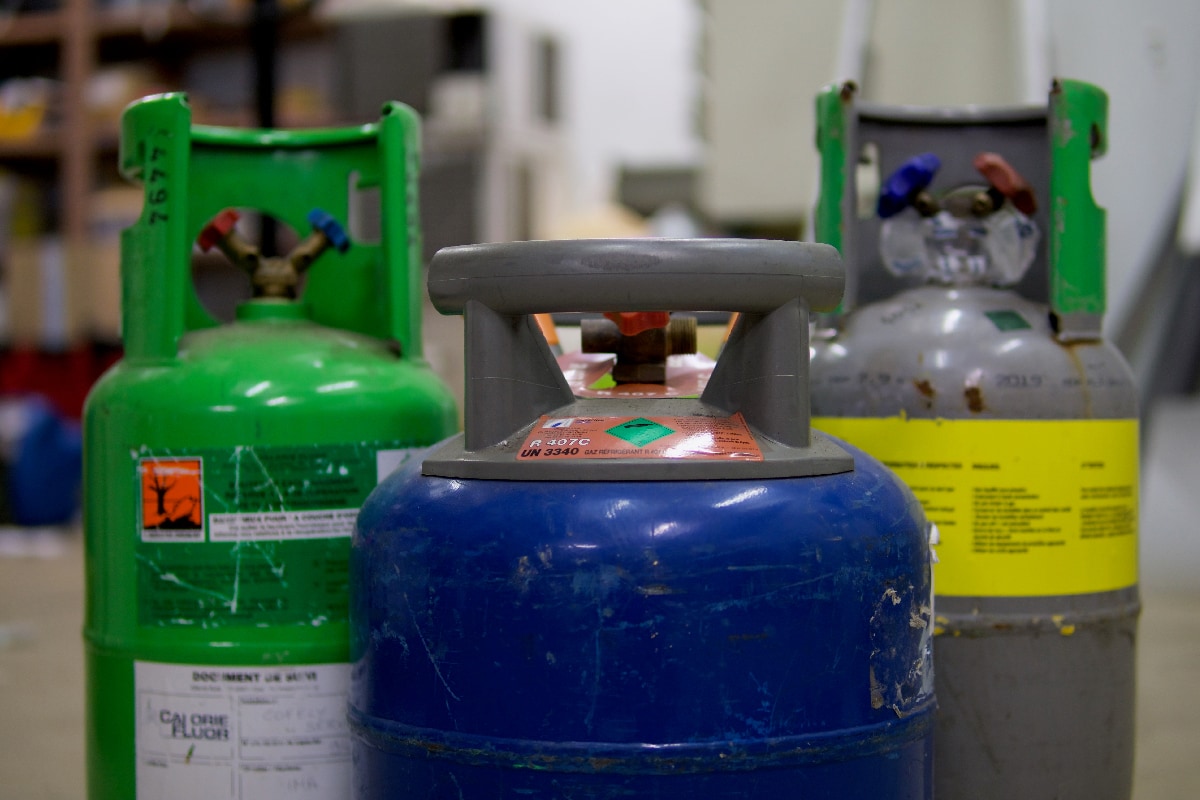 Never mix different refrigerants together, as they have different chemical compositions. Doing so will make the temperature inaccurate, and, worse, the HVAC unit will break due to pressure.

However, there's a way to remove an accidentally mixed refrigerant by the evacuation method. It's a technique in which the HVAC technician will empty the moisture, pressure, and any circulating gas in the system. It looks like refreshing the system by draining the chemical residue of refrigerant.

The evacuation method needs proper knowledge. You would want to let a professional do this for you. 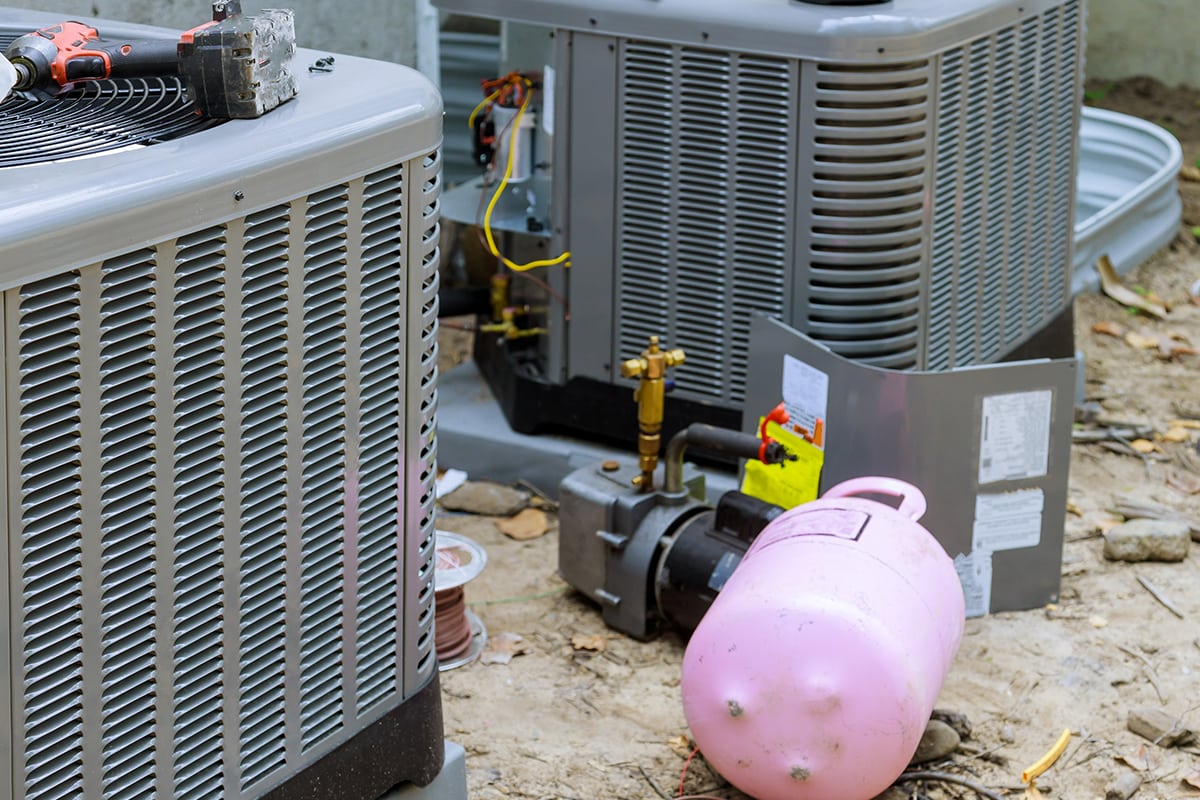 We're glad you read the article as we learned that an R-22 might work for an R-407C condenser, yet this act is prohibited due to some environmental issues. Remember to consult an expert for optimal HVAC unit performance.

Are you looking for more things to learn? Join us in reading here:

What Refrigerant Can Be Mixed With R22?

PTAC Unit Dripping Water – Why And What To Do?

What Is The Ideal Basement Humidity?

How To Clean A Ductless Air Conditioner [Including The Filter]

How Hot Does A Space Heater Get?

Air Conditioner Only Works When Car Is Moving – What’s Wrong?