Have you ever had a ceiling fan that makes strange rattling or clicking sounds? Or perhaps one that wobbles as it rotates? Ceiling fans are a great addition to have in any home or apartment, but it can be tricky to figure out the culprit of the issue when they malfunction. In this post, we're going to help you pin down the reasons why your ceiling fan may be making strange clicking noises--and how to fix it.

There are a few possible reasons why a ceiling can begin making clicking sounds, including the following:

Some of these malfunctions can be fixed in a matter of minutes, while others may require more involved repairs. Let's take a closer look at how to troubleshoot and addressing each one. 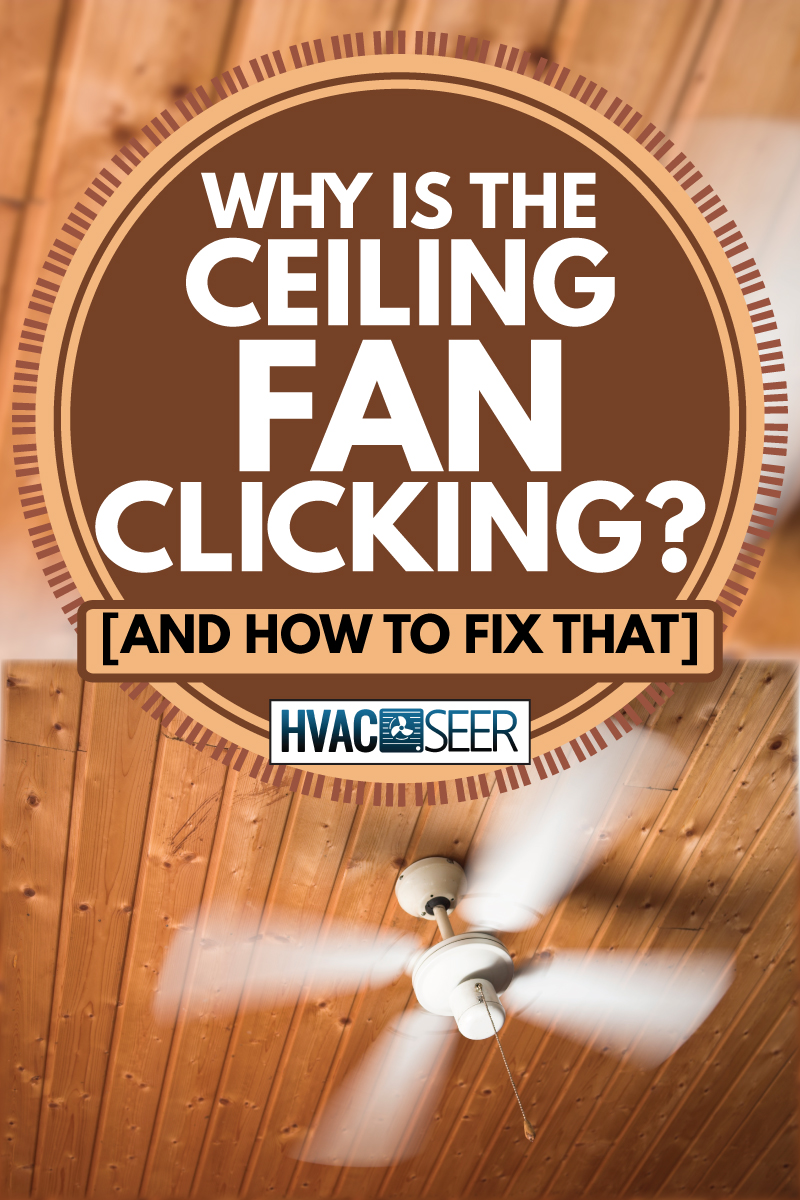 Most ceiling fans come with three to four medium-sized screws responsible for holding the fan's blades on the blade iron. When any of the screws become loose, it will cause the blade to tick as the fan rotates (it's also commonly referred to as "blade tick"). This issue is actually fairly simple to fix. You can start by grabbing a ladder and looking at the top of the blades on your ceiling fan.

From this view, you should locate the blade screws that are right next to the motor housing. Simply take a screwdriver and tighten the screws on each blade as tight as possible. Some newer model fans will not come with blade irons but instead have blades that connect directly to the motor housing. You can usually find the screws located behind the light fixture. In this case, you would just need to tighten those screws for each blade as well.

Find this ladder on Amazon.

It's also possible that the clicking noise comes from the canopy on the fan being screwed in too tightly. If you have a downrod-mounted fan, the canopy could be clicking from hitting the ceiling. To determine if this is the issue with your particular fan, first turn the fan off. Then, loosen the screws holding the canopy into the hanging bracket.

Next, physically lower it a bit so that it rests on top of the motor housing. Turn the ceiling fan on, and if the clicking sound is no longer there, you've found the source of your issue. When you place the canopy back in place, only tighten the screws enough to where the canopy is still somewhat loose. Doing so will prevent it from tapping the ceiling).

A loose hanging bracket can also be the reason that your ceiling fan is clicking. To determine this, place your hand on the hanging bracket and try to move it from side to side. If the bracket is loose, the fan will begin to rock as you do this. If it does, don't fret, as this is another simple fix.

Two screws hold the bracket onto the electrical box for the fan; simply tighten them with a screwdriver (or tighten the lock nuts if your fan model uses these instead). Ensure that the screws are as tight as possible, as this is definitely an area where you want absolutely no looseness. 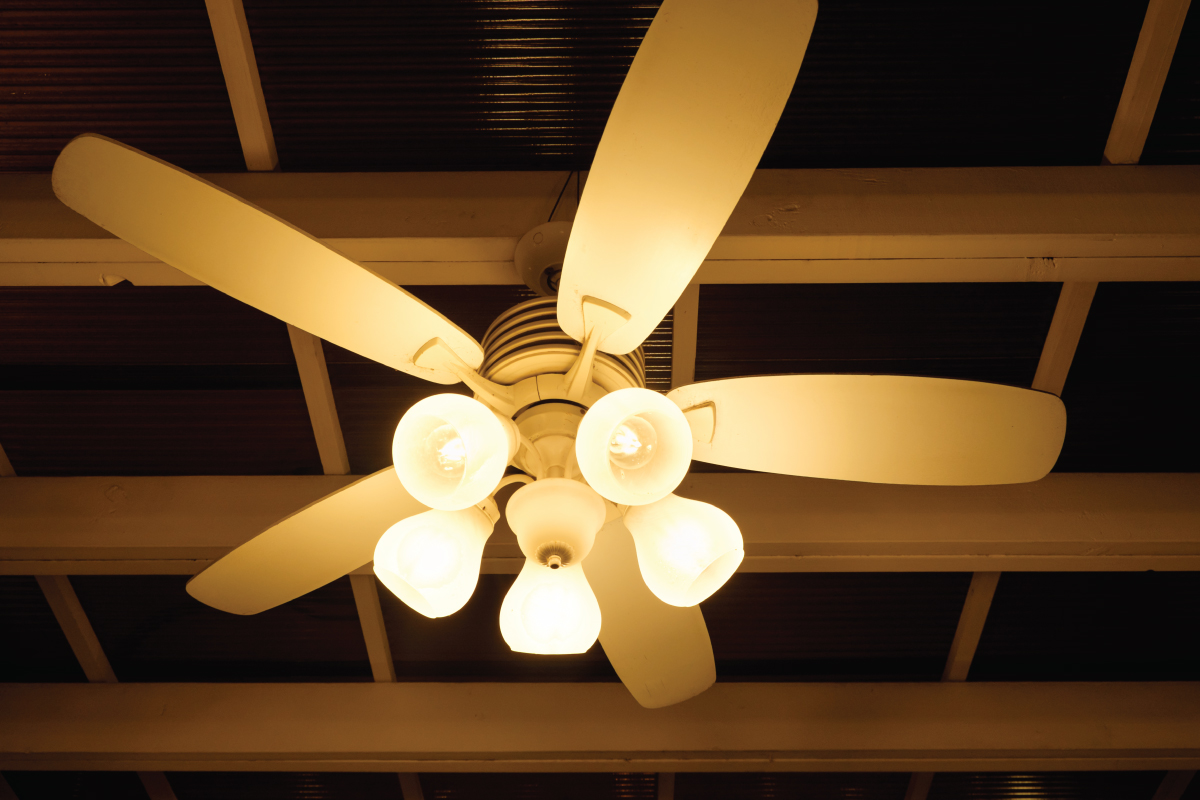 Sometimes the connection of the wires in a ceiling fan can become exposed to its motor. This is especially common in flush-mounted fans. If the small wires aren't tucked properly between the electrical box and hanging bracket, they can cause a clicking sound when they hit the top of the fan's motor or screws.

This ticking will usually occur with every full rotation of the blades. To determine whether this the issue with your fan, start by removing all of the screws and blades from the fan's motor (it's usually only two screws on each blade). Next, remove the decorative motor cover from the fan.

Is It OK For A Ceiling Fan To Wobble?

No, it is not okay for a ceiling fan to noticeably wobble. Though a slight wobble is expected from ceiling fans due to their blades' fast rotation, it's usually no more than about an eighth of an inch, and that's on a high setting. Any wobbling or visible unsteadiness means that the fan needs a repair immediately, as this can be a potential hazard.

How Do You Balance A Wobbling Ceiling Fan?

A ceiling fan that wobbles is simply off-balance. The most common causes for this are either that the blades are off-balance or loose screws somewhere in the fan's housing. To determine if the blades are the issue, first turn off the fan and take a look at the screws on all of the blades.

If any screws appear to be loose, be sure to tighten them as much as possible using a screwdriver. Next, check the screws on the mounting brackets and tighten them if needed as well. If the fan is still wobbling, you can use a measuring tape to measure the distance from the top of the fan's blades from the ceiling to see if they're warped or bent, or you can simply take a close look at each to see if any of the blades are hanging lower than the others.

If so, you can buy a blade balancing kit for your ceiling fan and any hardware or department store to fix the blades. However, if there is unrepairable damage to any of the blades, you will need to replace them completely.

Find this screwdriver set on Amazon.

Can A Fan Fall Off The Ceiling?

A ceiling fan can absolutely fall completely off the ceiling. In fact, there have even been instances, such as the one with Lowe's, where manufacturers have recalled certain models of ceiling fans due to their potential to fall off and cause injury. Like any other home appliance, ceiling fans will begin to malfunction as they age.

Fans can begin to wobble, make clicking sounds, and squeak as their components grow worn from everyday wear and tear. It's estimated that over 19,000 people are injured every year due to improperly mounted ceiling fans falling from the ceiling. This is why it's strongly recommended that you have a professional contractor install or replace your ceiling fan if you have no experience with this type of DIY task.

Why Is My Fan Making A Rattling Noise? 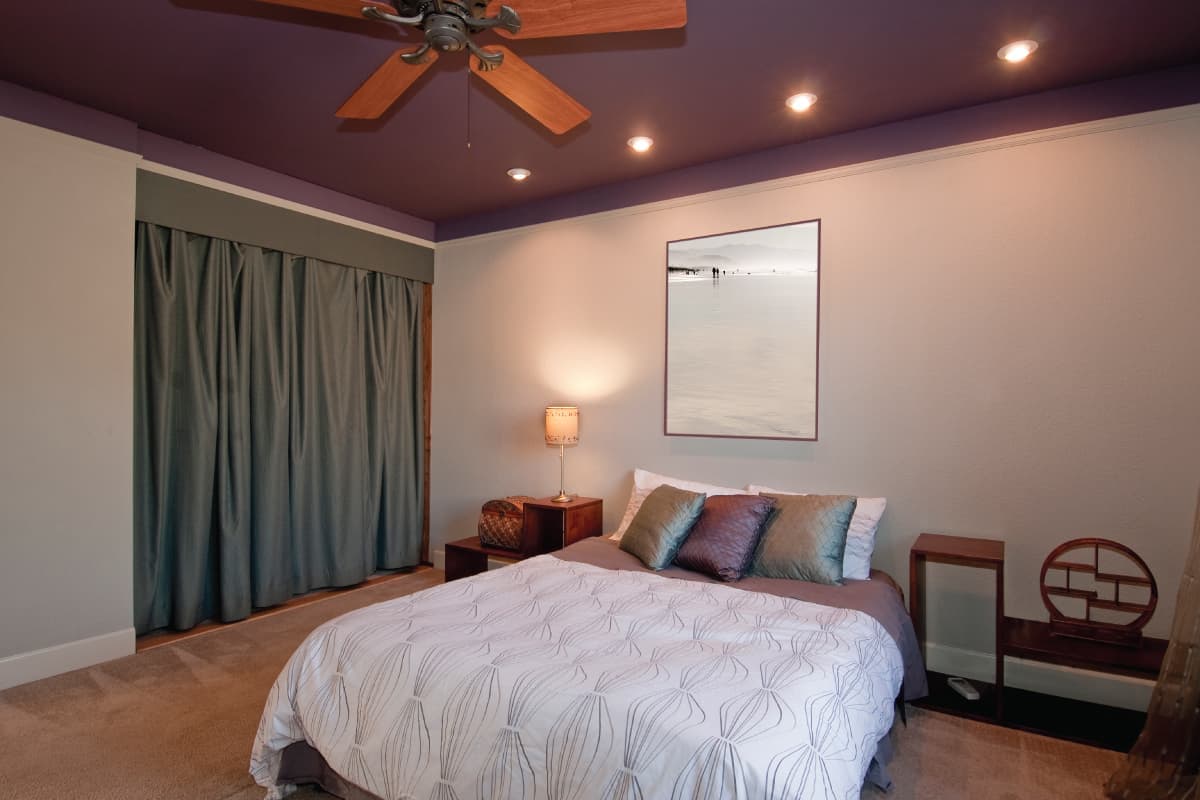 When a ceiling fan makes a rattling sound, it usually means that something inside the fan's assembly is loose and needs to be tightened. This is particularly important to address as soon as possible, as it can be a safety hazard. Here are the most common causes of rattling noises from a ceiling fan.

Today, most of the ceiling fans in homes include a light fixture. Over time, the fixture can become loose, especially if the fan is used frequently or is fairly old. If you notice rattling noise coming from your fan, first inspect all of the light fixture components. Look for any loose screws, shades, or bulbs and tighten them as needed.

If your ceiling fan does not include a light fixture or the fixture components are tightened securely, then the issue could be loose screws somewhere on the fan's assembly. This could be either the screws attaching the fan to your ceiling or the ones connecting the blades to the fan's motor. It can easily be fixed by simply inspecting and tightening the screws with a screwdriver (be sure to tighten them as much as possible). If you are unsure where these parts may be located on your fan, you can find these details in the instruction manual.

Why Is My Fan Making A Scraping Noise?

If your ceiling fan is making a scraping on grinding noise, there are usually two main culprits. The first is that the motor's bearings have gone bad, the second is that the blade irons are starting to rub against the motor during the fan's rotation.

If the motor bearings are the issue, you can take the motor apart and apply lubricant to them. However, sometimes this is only just a quick fix, as the rattling sound will likely come back within a few weeks if the fan is old. When bearings get to this stage on older fans, it's usually because the ceiling fan has simply run its course and needs to be replaced.

If the blade irons are the issue, it's a fairly simple fix. You can confirm that this is the root of the issue by first tightening the screws located on each blade iron. After tightening the screws, if you still notice the sound, it could be that the fan's motor has been pushed off-center of its housing (which is mostly found in new fans as a result of shipping).

If this is the case, get on a ladder to get close enough to the fan to see exactly where the blade irons are scraping.

Next, while holding the switch cap with one hand (the area just beneath the blades), pull the motor housing to the other side, physically centering it. Make sure to push the switch cap away in the opposite direction of where the motor is making contact with the blade iron. If done properly, this should put the motor back in place and remove the scraping noises.

Hopefully, this post has provided you with enough helpful information about why a ceiling fan may click or make other strange sounds. Remember always to contact a licensed electrician if you are inexperienced with performing a ceiling repair or yourself.

Before you go, be sure to check out our other blog posts:

Should Air Conditioners Be Covered In The Winter?

Can You Use Loose Fill Insulation In Walls?

What Size Line Set For An AC By Ton?

How To Insulate Garage Door For Summer To Keep Heat Out?

What Ceiling Fans Have The Brightest Light?

How To Insulate A Cement Or Concrete Floor

How Cold Will An Unheated House Get?