A fireplace is a lovely addition to any home. It adds comfort and warmth, and the sound of a crackling fire can be soothing and relaxing. But the threat of a house fire can be a deterrent. Even though you keep a close eye on the fire in your hearth, you've heard of chimneys themselves catching on fire. Why? Is chimney soot flammable? We've done some digging and have the answer for you.

Chimney soot is flammable. The degree to which it can be flammable largely depends upon its composition. If the soot is mixed with a lot of ash, it becomes less combustible, as ash is not a combustible material like soot is. Soot should not be allowed to build up in a chimney for multiple safety and maintenance reasons.

Although chimney soot is flammable, let's talk about what makes it more or less so, as well as other questions you might have. Read on to learn more of the detail! 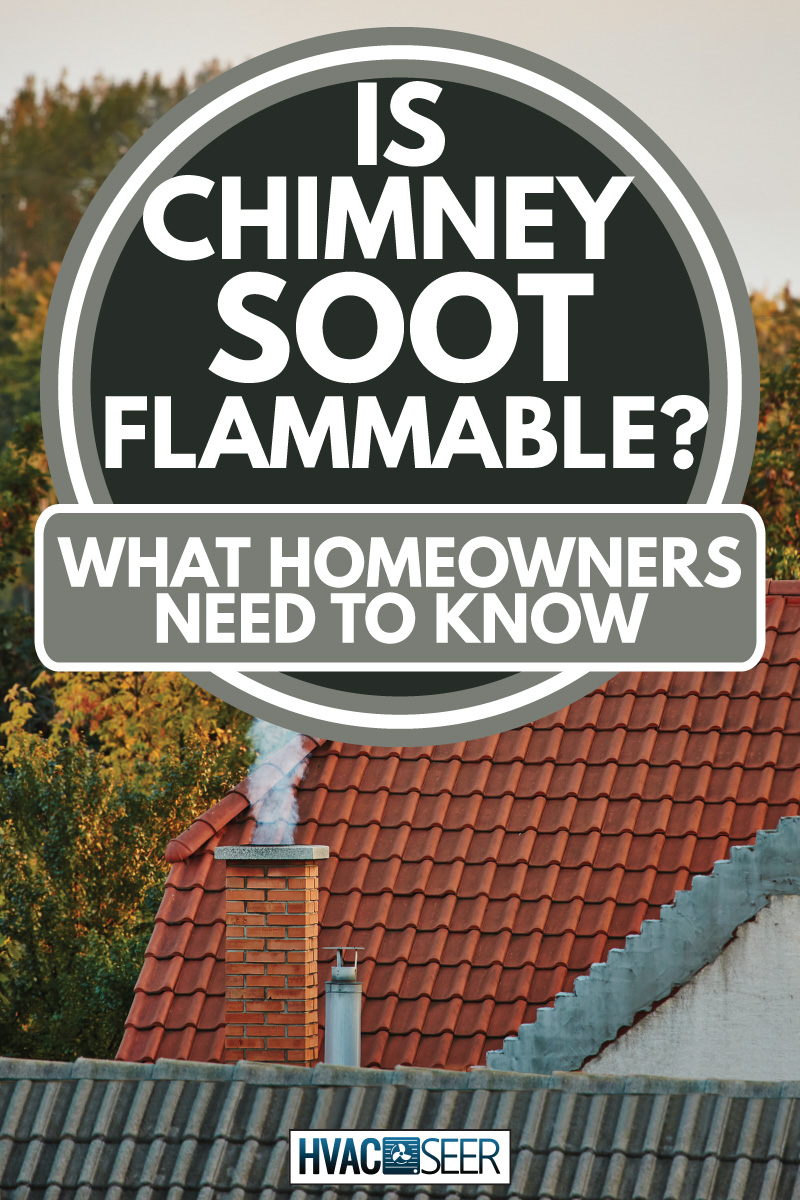 Soot is a powdery residue of unburned carbon and tar particles. It is essentially what is left behind when the wood in your chimney hasn't totally burned away. Soot is fine black or dark brown particles that settle on surfaces. It is initially easy to wipe away, but as the soot layers, it becomes difficult to clean. Soot can be dangerous as it will block airflow in your chimney and adds combustible material to your chimney.

At most times, the soot in your chimney will be combined with a large amount of ash. The ash combines with other organic materials, such as soot, increasing its chances of combustion. Because at any given moment, you're not likely to know the exact composition of ash to soot in your chimney, it's best to keep it cleaned regularly so as not to allow build-up.

What is the difference between Soot, Ash, and Creosote?

As discussed above, soot is the residue left behind by material unburned, therefore leaving it as a flammable substance. But how does that differentiate from ash or creosote?

Ash is not combustible (flammable) as it is the end product of complete combustion, as the fire completely consumed the material burned. Though ash is considered a mineral, it can still contain organic materials making it combustible. The darker the ash, the more materials it contains from incomplete combustion. These types of ashes need to be treated as flammable.

Creosote is a sticky, tarry residue that condenses from combustible particles, such as wood in a chimney. It forms layers on the inside of a chimney and is highly flammable and difficult to clean. Creosote may appear in many forms -- dry and craggy, thick and flaky, or shiny, hard, and black. Restricted airflow can cause a build-up of creosote in the chimney, as well as cooler fires when the air isn't hot enough to carry the particles out of the chimney. Creosote can build-up faster if you routinely use wood that hasn't been properly seasoned. 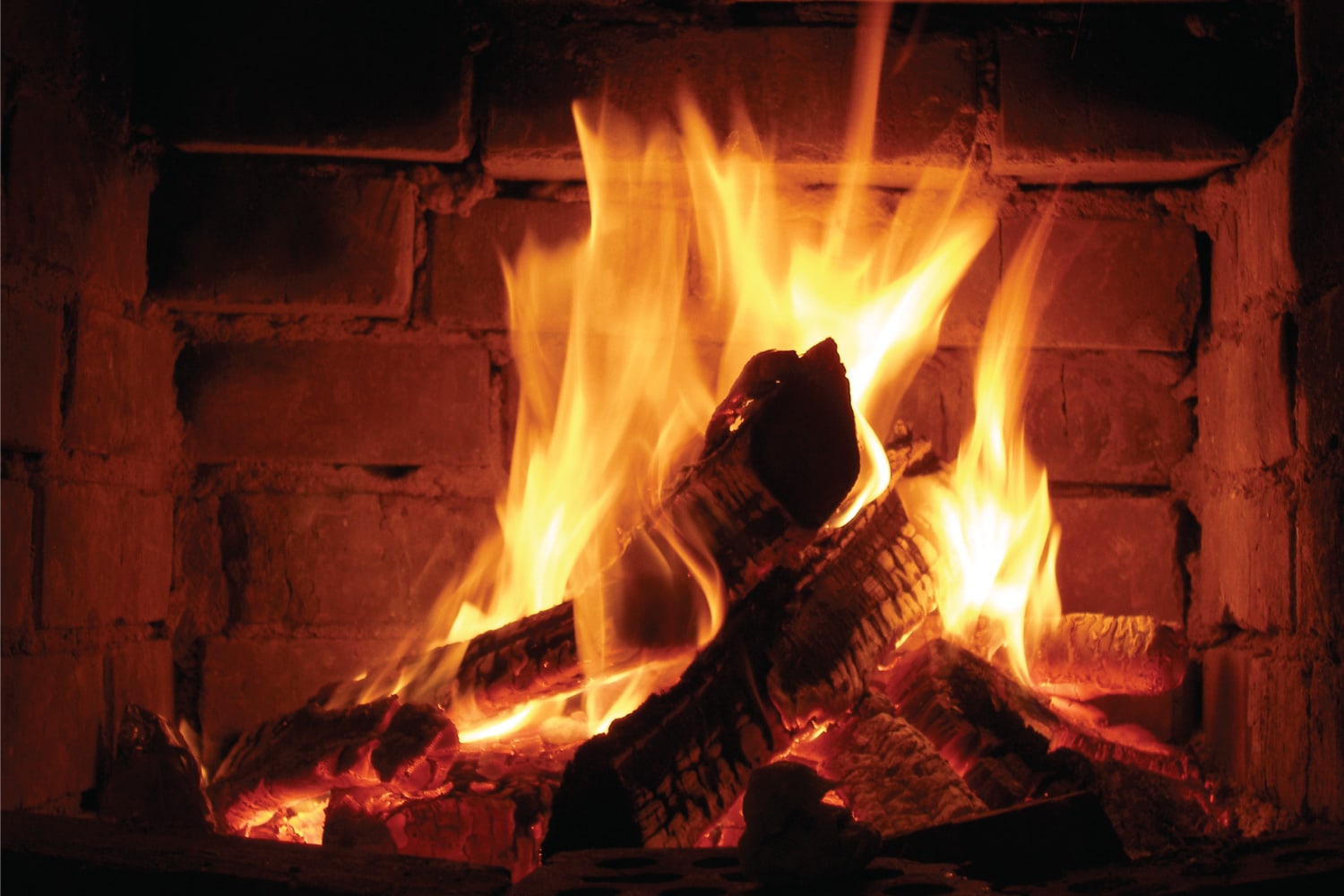 Chimney soot has the capability of being quite dangerous. Not only is it flammable, but it also cuts off the air supply to your chimney. A build-up of soot blocks the airflow, allowing creosote to accumulate and large amounts of soot and ash to make their way back into your home. If the airflow is cut off and smoke, ash, and soot are breathed in, this can cause severe respiratory distress. Lung disease and respiratory illness can occur from breathing in too much residue emanating from a fire. An excess of these carcinogens could even lead to incurable cancers.

Can Your Chimney Catch Fire?

The chimney itself can catch on fire. If they are not routinely cleaned, the buildup of creosote and soot, which are combustible materials, will catch fire. These fires can, at times, be small and unnoticed, but can affect the structural integrity of your chimney, leaving you vulnerable to worse fires over time. Chimney fires are a serious business and should be avoided at all costs!

Why Is Soot Falling Down The Chimney?

A build-up of soot could result in you noticing soot or mortar pieces falling down your chimney. A fluctuation in temperature generally causes this. The soot in the chimney can attach to the mortar between bricks and naturally wear away bits and pieces.

Additionally, you might notice more soot coming down the chimney in the warmer months when the chimney isn't in use. This is because the heat of fire rises and directs airflow out the chimney. In the summer, the reverse is true; the airflow is from outdoors to indoors, rushing down your chimney and causing the soot build-up to fall.

How Do You Prevent Soot From Falling Down The Chimney?

The best way to prevent soot from falling down the chimney and prevent soot build-up is to sweep the chimney. This can be quite a chore, but with routine chimney sweeping, this can circumvent issues down the line. Sweeping the chimney can be a dirty job. Be sure always to wear a face-covering to ensure you won't be breathing in carcinogens.

Regardless of whether or not you do some routine chimney maintenance, it would be best if you had it professionally cleaned once a year. 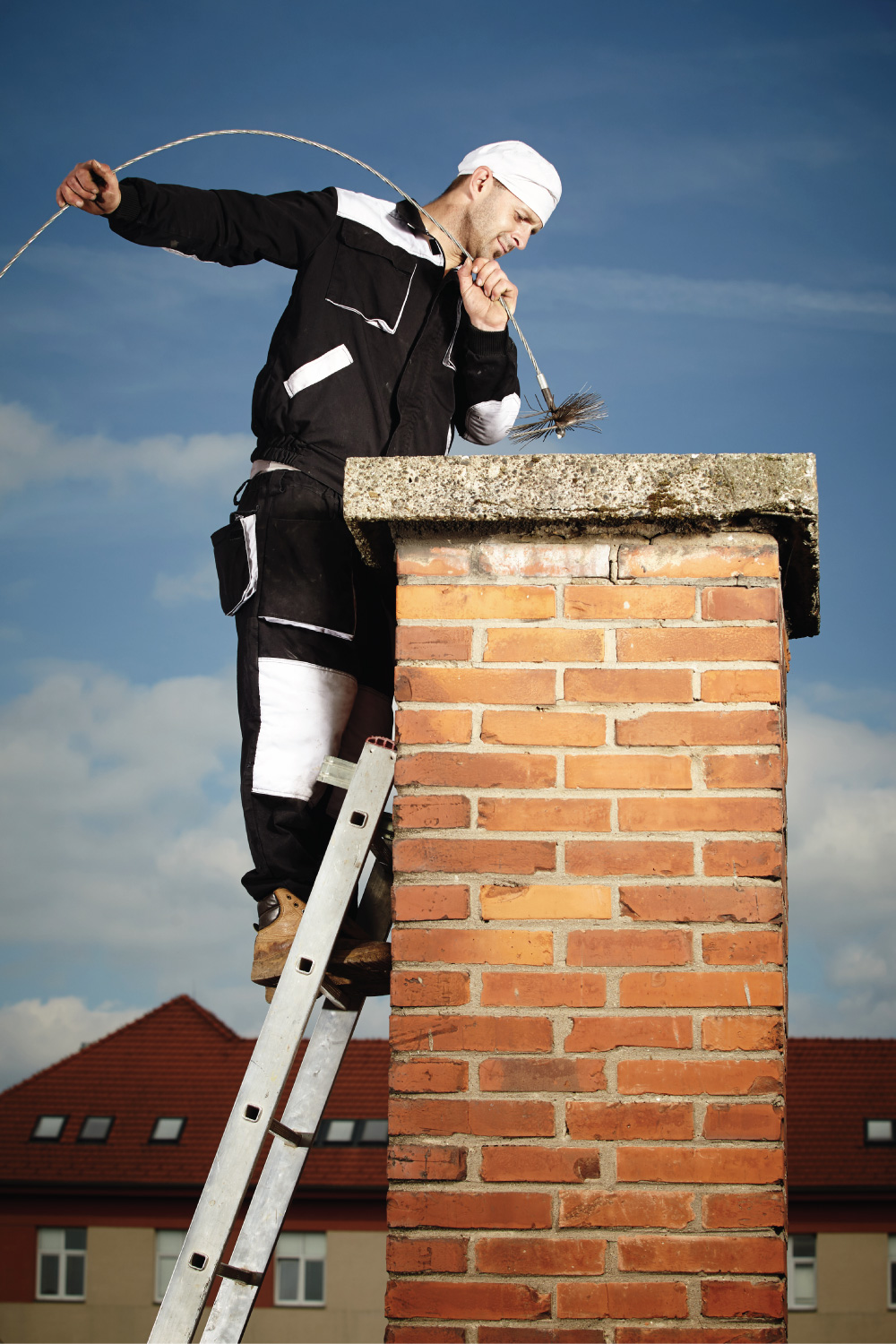 Thinking of just switching to an electric fireplace? Read our post, "Does an Electric Fireplace Need a Vent?"

How Do You Get Rid Of Chimney Soot?

You can clean chimney soot yourself, but remember, soot can be an irritant to the respiratory system and the skin. Always wear protective equipment.

Soot can be cleaned from the bricks around your fireplace and flue through a few different options. There are commercial cleaners available for hard materials, so trying one of those is definitely an option. Always follow the manufacturer's instructions when using a commercial cleaner.

View this cleaner on Amazon.

What's the difference between a flue and a damper? Check out "Fireplace Flue Vs. Fireplace Damper."

You can make a homemade mix of hot saltwater with dish soap, combining them until you have a creamy mixture. The mix can be rubbed into the brick, allowed to sit for about 15-20 minutes, and then scrubbed with a stiff brush.

View these scrub brushes on Amazon.

Another mix to try is made of soap, hot water, and a small amount of vinegar. This mixture should also be allowed to set before scrubbing with a pumice stone.  With either method, finish by rinsing the area with warm water.

View this pumice stone on Amazon.

Chimney soot is most definitely flammable. Although some other things in your chimney might be more combustible, it is unwise to allow the soot to build-up unchecked for many reasons. To keep your home healthy and happy, make sure the chimney is cleaned at least once a year and ensure adequate ventilation, but above all, stay vigilant.

Want to read more about chimneys? Check out our post, "How Much Does it Cost to Seal a Chimney?"

Should You Clean The Ash Out Of A Fireplace?

Your Torpedo Heater Will Not Run With The Cover On? – Why? What To Do?

Does Ecobee Thermostat Require A Subscription?

6 Best Heaters To Use During A Power Outage

How To Install Roof Insulation Foil?