Ceiling vents are a critical part of an HVAC system. After all, they are the outlet through which that nice warm or cool air enters the room. Whether you're replacing your ceiling vents or are simply curious if your current setup is efficient, you might be wondering which direction the vents should point. We did the research to bring you the answer.

Ceiling vents, or registers, are generally located on the perimeter of any given room. They should point toward the rest of the room they are intended to help warm/cool. They can then be more precisely adjusted to provide the desired amount of airflow. Ceiling return vents should be oriented to minimize visibility.

If you still have some additional questions about which direction ceiling vents should point, don't worry. In this post, we'll discuss the topic in more detail. We'll also talk about which way return vents should face, how to adjust ceiling vents, whether you should keep all your vents open, whether ceiling vents need filters, and much more. Without further ado, let's get into it! 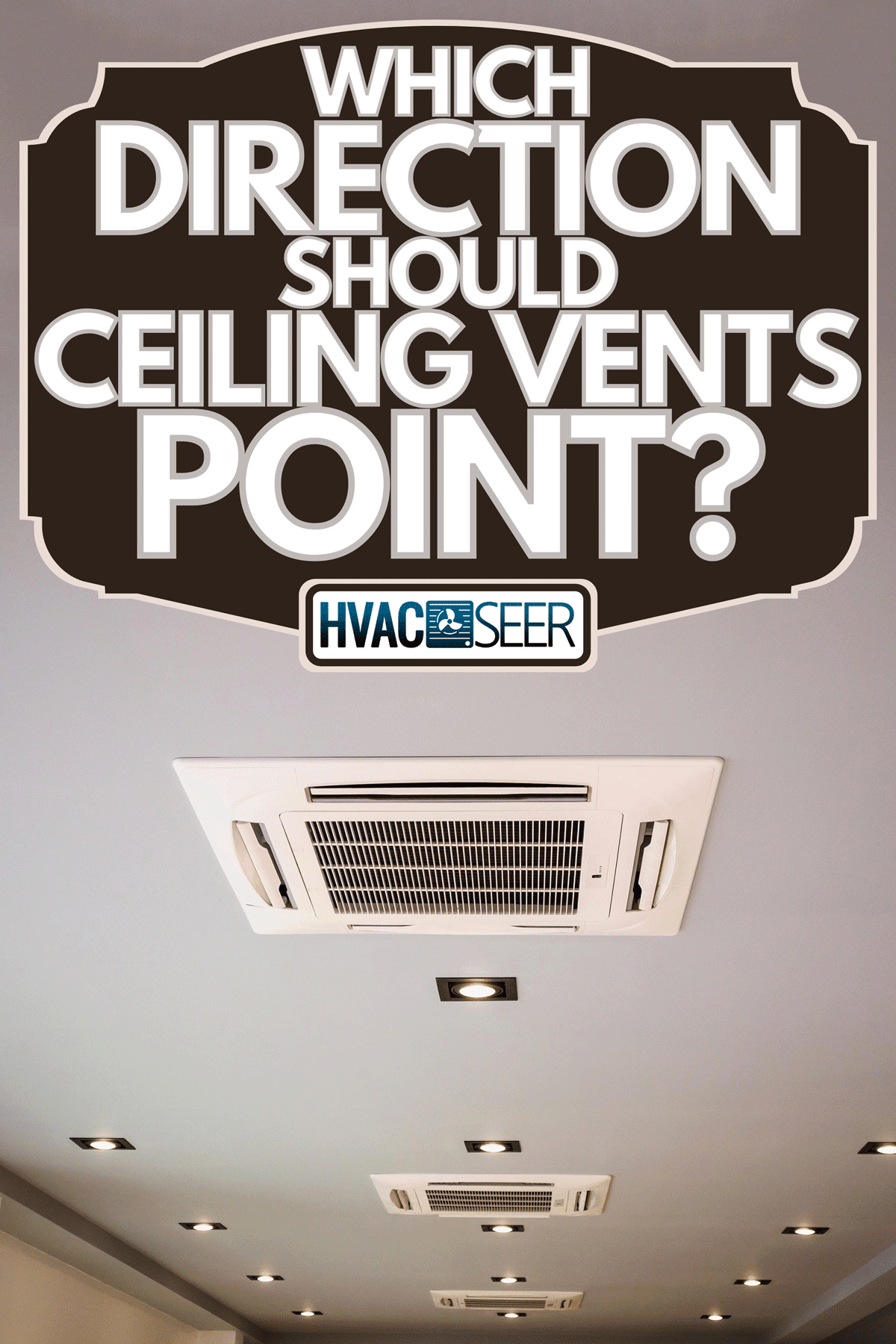 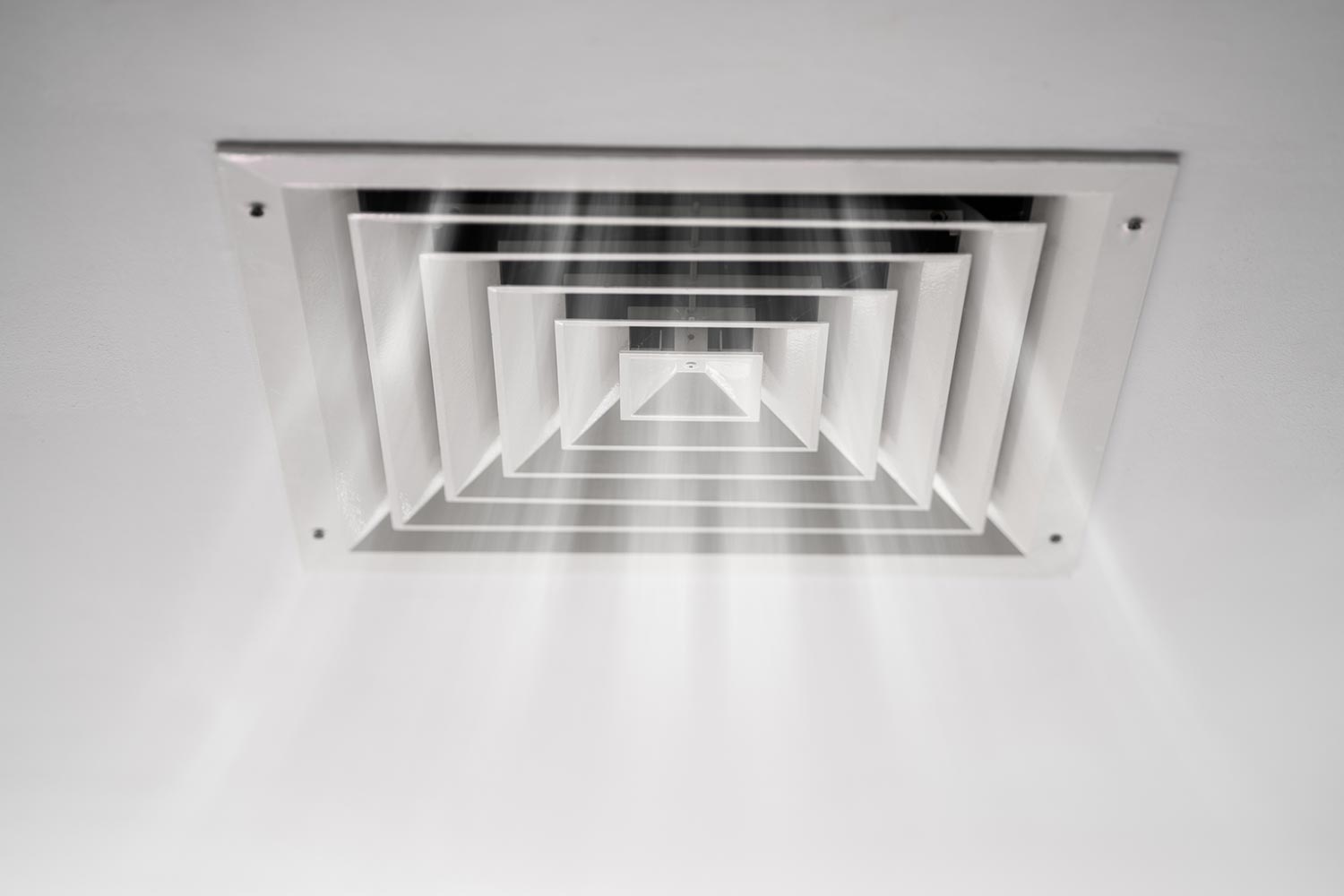 So, it's important to ensure that each air vent is oriented so that the middle section directs air toward the rest of the room. Otherwise, since ceiling vents are typically situated around a room's perimeter, the air would simply be directed toward the closest wall.

The standard practice is to position these vents so that one can't see through them to the ducting beyond.

So, someone standing in front of the return vent shouldn't be able to see past the louvers on the vent.

Unfortunately, if your air return vent is located on the ceiling, there's no way to completely erase the visible footprint of the ducting; anyone standing directly underneath it will be able to see through the louvers on the vent.

That said, the best approach is to orient it so that it faces away from higher-traffic areas.

For instance, if you have an air return vent on the ceiling of a major hallway that connects the living space to bedrooms or an office, consider orienting the return vent so that it points away from the living space. This way, guests will be less likely to see past the louvers.

How do I adjust my ceiling vents? 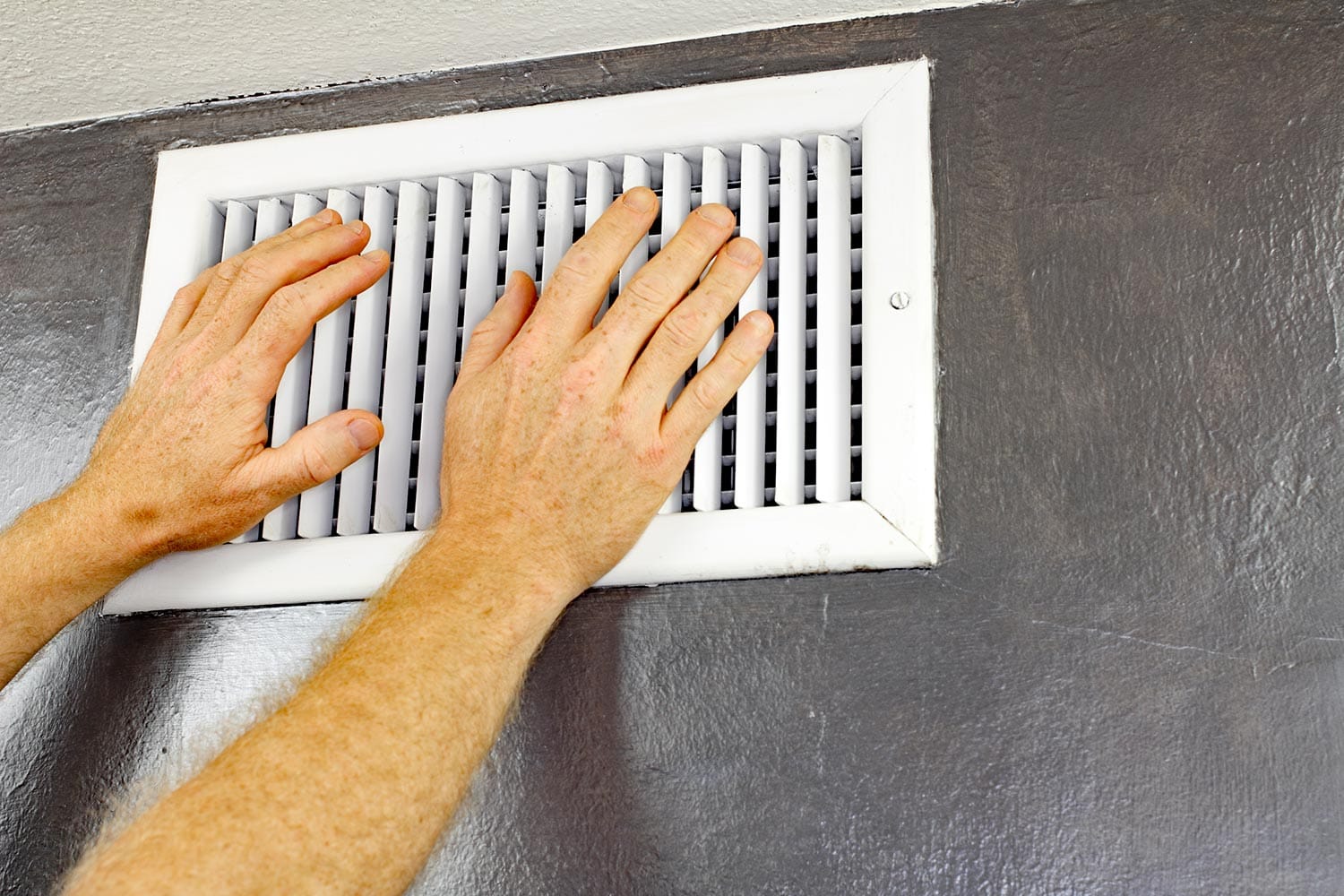 Earlier we mentioned that the airflow from ceiling vents can be adjusted. But how exactly do you do it?

Before we get into it, it's worth noting that the correct term for this kind of vent is a register. A register differs from a simple air vent (such as the return vent discussed above) because it has dampers or a set of flaps, that can be adjusted to modify the amount of airflow.

To adjust the airflow from ceiling vents, first, locate the lever on the side of the register. Then, simply adjust it in either direction to attain the desired amount of airflow.

As you adjust the lever, you should see the internal flaps open or close. Obviously, more air will be permitted to pass through the register with the flaps open and vice versa.

Should I keep all my vents open?

Now that you know about adjusting the registers throughout your house, you might be wondering whether you should keep them all open or close some of them. After all, why leave the vents open in parts of the house that are seldom frequented? Wouldn't selectively closing certain registers help save on energy?

This line of thinking appears to make sense, but in reality, it's not a good idea to close any registers in your house. Doing so will both adversely affect your energy bill as well as potentially cause damage to the HVAC system.

Closing the damper in a register doesn't actually reduce the amount of air being pumped through the system; it simply reroutes it to the other registers.

In turn, this rerouted air increases the pressure in the system, which can worsen any existing leaks there might be in the ductwork, or it might create new ones. And leaks can cost you money both in decreased energy efficiency and in future repairs.

The best approach is to leave every register open to ensure a balanced circulation of air and to promote overall system efficiency. Leaving the registers open will allow the house to be cooled/heated more uniformly which will reduce your energy bills.

How do I know if my ceiling vents are open?

Luckily, confirming that your ceiling vents (registers) are open is easy. Simply look up into the vent and determine whether the flaps of the damper are perpendicular to the ceiling. If they are, the vent is open. 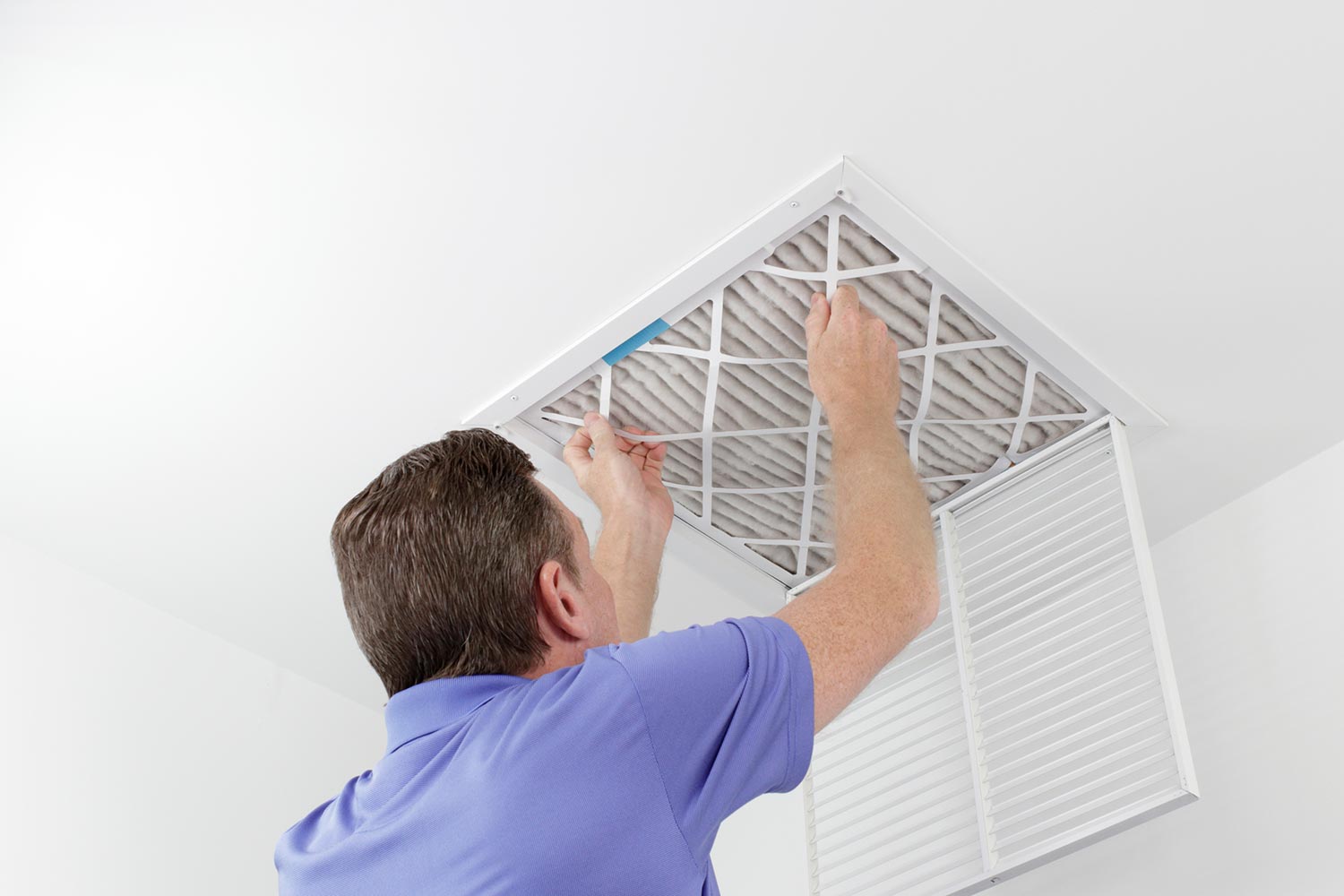 It's recommended to have filters in every return vent. This will ensure that the air is nice and filtered before entering the system. Having filters in return vents can prevent bigger issues with your HVAC system down the road.

Read more: Which Side Of Furnace Filter Should Be Dirty?

What happens if you put an air filter in backward? 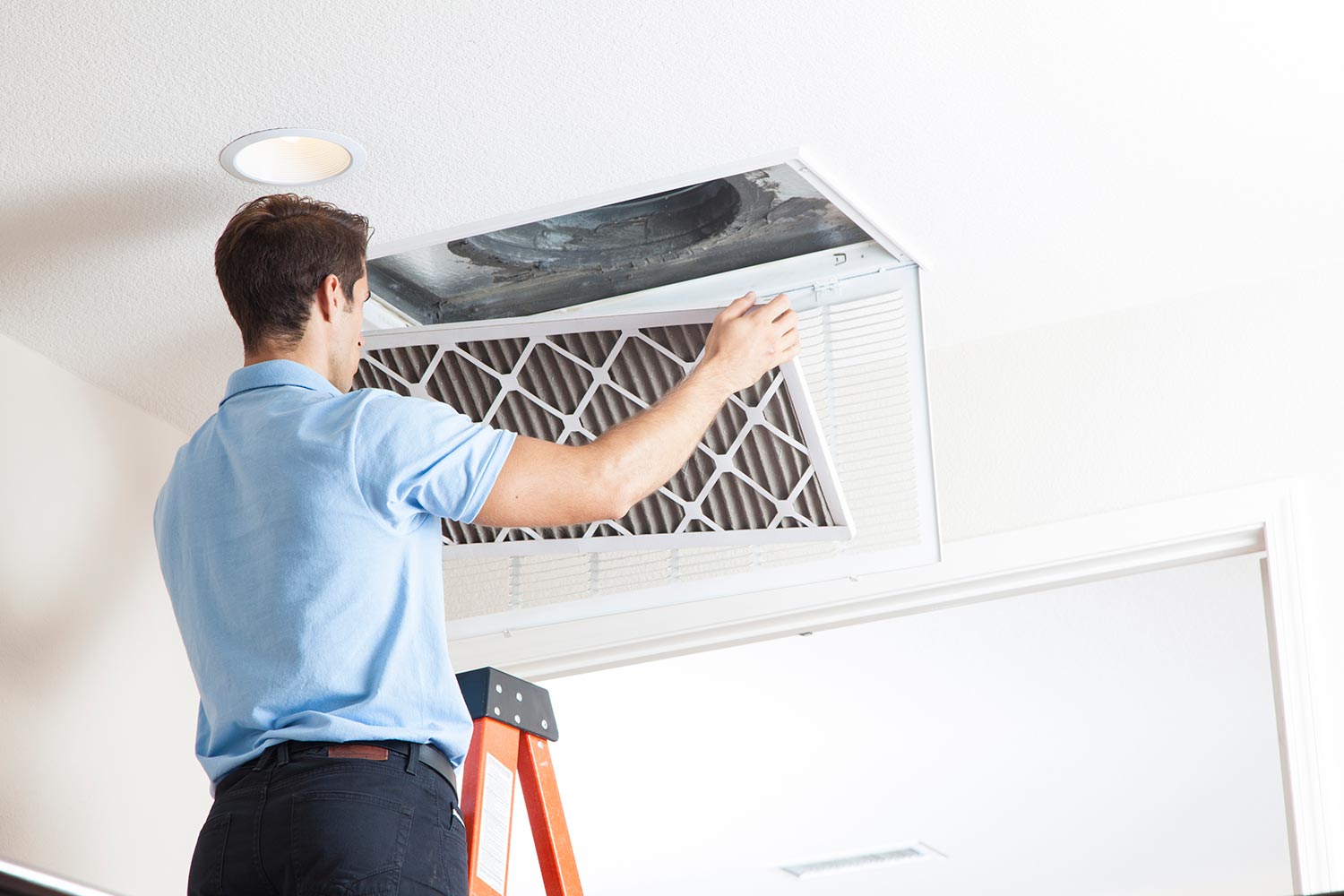 While both sides of an air filter look the same, they aren't. If a filter is installed backward, it will be more difficult for air to pass through it. In turn, this will increase the strain on the air handler, and this will result in higher electric bills and possibly damage to the system itself.

So, though it might seem trivial, an air filter's orientation is extremely important. Luckily, air filters have a little graphic with an arrow indicating the airflow direction. The arrow should face away from the return vent opening and toward the HVAC system.

If you're more of a visual learner, take a look at this YouTube video that outlines the process of changing a return filter with an emphasis on proper orientation.

We hope this guide has helped you better understand the optimal orientation of ceiling vents. Simply altering their orientation can have a noticeable effect on the airflow in any given room.

And be sure to always keep ceiling registers open to ensure overall system efficiency. And now you know that there's an aesthetic explanation for the orientation of return vents.

Before you go, be sure to take a look at these other posts:

How To Clean Central Air Conditioner Vents And Ducts

Should Fireplace Vent Be Open?

Lennox Air Conditioner Vs Goodman: Which Is Right For You?

Mr. Cool Double Dash Error – What Does It Mean?

Furnace Leaking Water When Heat Is On – What To Do?

How To Vent Your Dehumidifier

Can I Bypass AC Compressor With Shorter Belt?

Fireplace Flue vs. Fireplace Damper: What Homeowners need to know