AC capacitors are one of the most common electrical components in most circuits. Do you ever wonder if AC capacitors have polarity? We've researched this topic and discovered the answer for you.

AC capacitors are classified as non-polarized capacitors. Thus, they don't have positive and negative polarities. You don't have to worry about its configuration in a circuit because you can interchange it without affecting the circuit.

We will briefly discuss AC capacitors, what happens if you reverse their connection on a circuit and the types of capacitors. So, keep reading to learn all this information about AC capacitors. 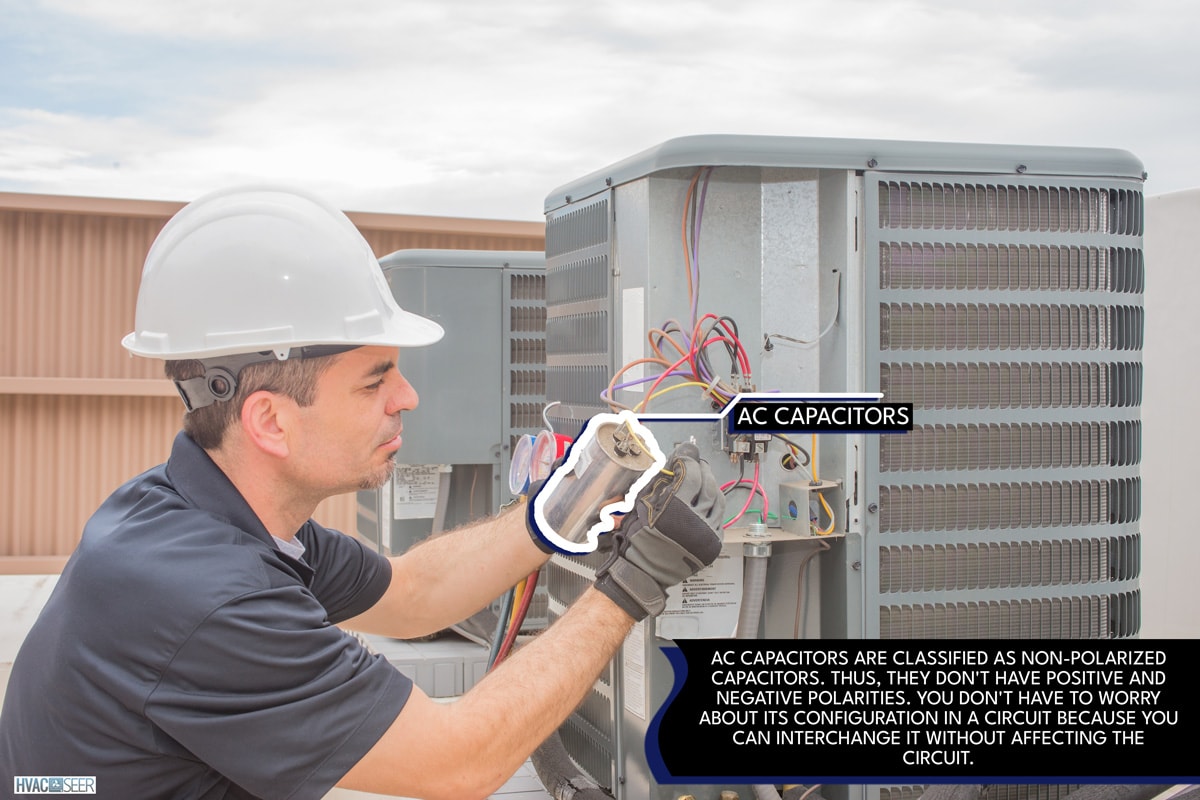 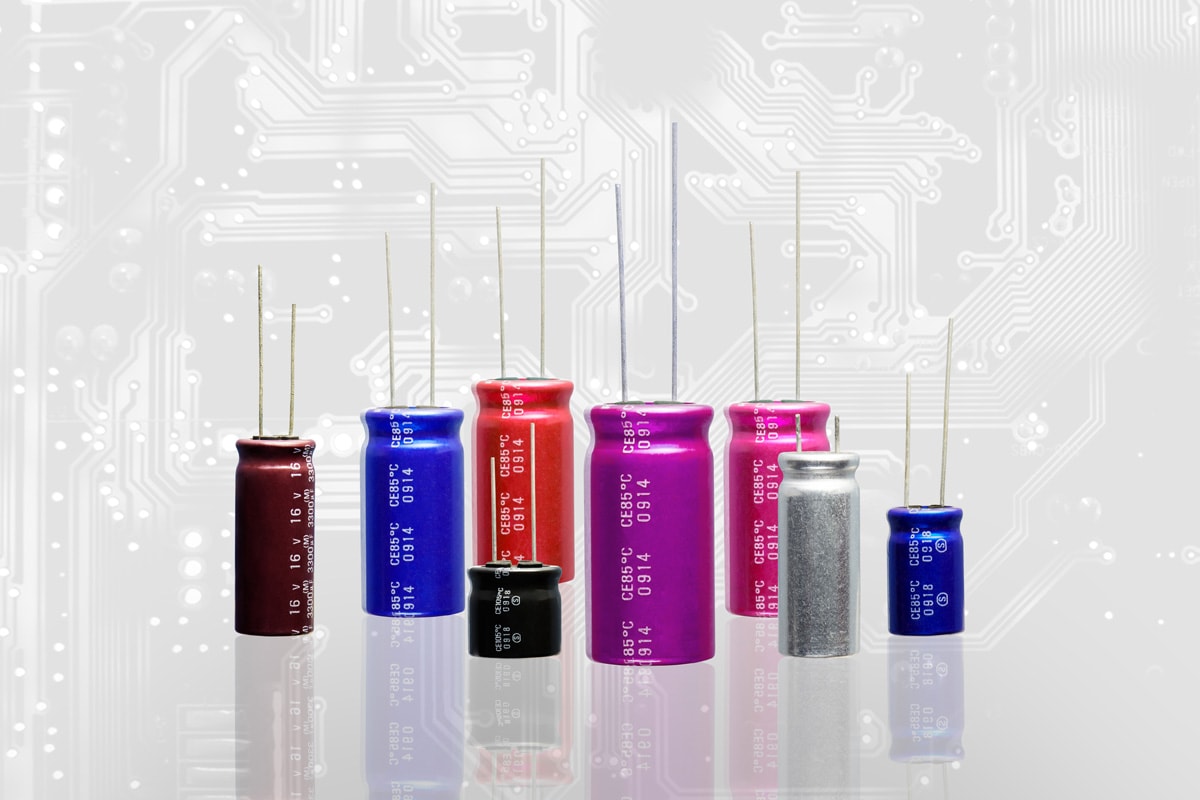 A capacitor is a two-terminal passive electrical component designed to store energy. It functions like a battery but can discharge in a split second.

Essentially, it consists of two conductors, usually separated by a dielectric. Additionally, it contains wires for connection that are linked to the conducting plates. Capacitors can be categorized using various criteria, including materials, size, polarity, shape, and function.

Non-polarized capacitors are another name for AC capacitors. These are capacitors that have neither positive nor negative polarity.

Depending on the use, you can find capacitors in several shapes, such as circular, deformed rectangle, square, and tabular.

What Will Happen If You Reverse An AC Capacitor?

Due to its non-polarization, you could connect it either way in the circuit, and it will not cause harm to your circuit.

What Capacitors Have No Polarity? 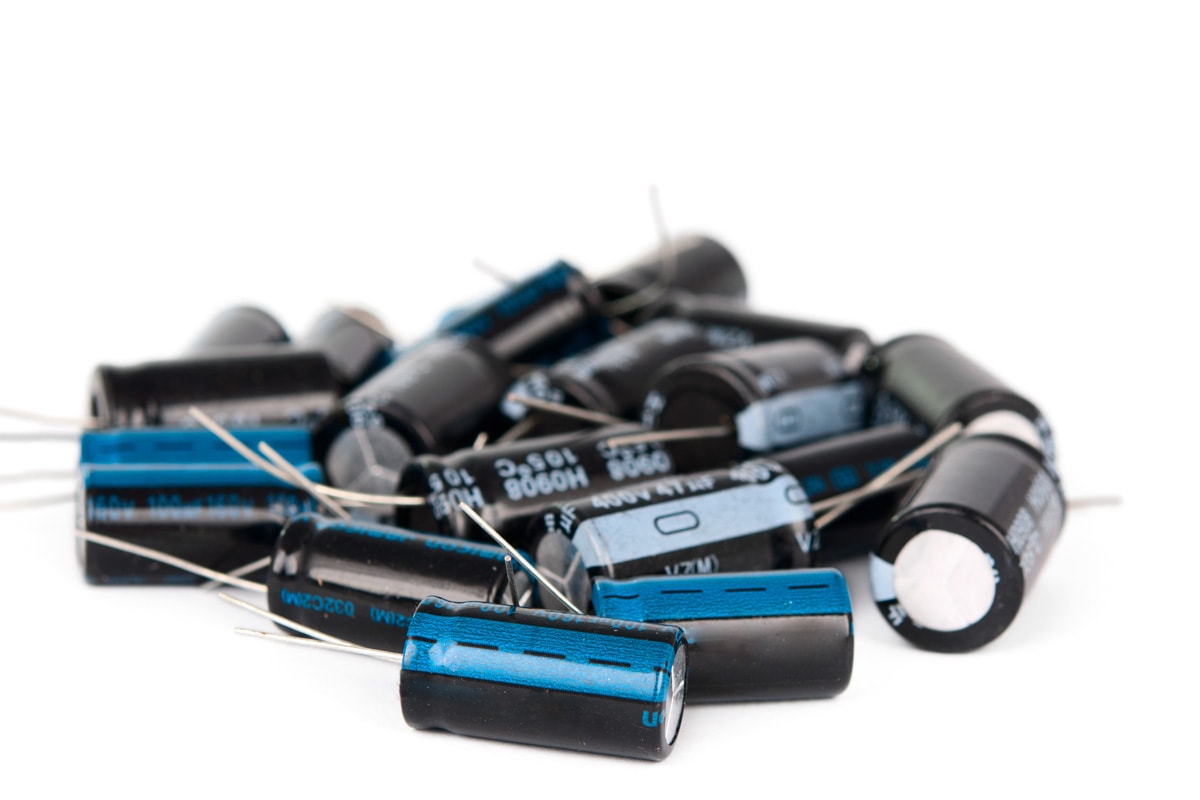 Mylar capacitors are precise, affordable, have high energy densities, and have minimal leaking. Additionally, they have excellent characteristics such as high heat and humidity resistance.

They are employed in applications with harsher environments, including communications, timing, and converters. Mylar capacitors are also used in the audio signal path because they can significantly improve the sound. They can sustain voltages in relatively tiny packages.

Click here to see these mylar capacitors on Amazon.

Ceramic capacitors are the most prevalent kind of non-polarized capacitor ceramic. They are primarily employed in devices with high stability and minimal loss.

They are more stable with variations in voltage and temperature. These capacitors are safe to connect to an AC source because they are not polarized.

Remember that their performance and temperature stability vary depending on the manufacturer. These capacitors are the least expensive type of capacitor and well-established technology. The newest types are block shaped, whereas the earliest styles are disk-shaped.

The capacitance values of these capacitors are steady concerning the applied voltage. The dielectric composition of the capacitor limits the free current flow.

Click here to see these ceramic capacitors on Amazon.

Teflon is commonly regarded as the best available capacitor overall and the one that is the most durable and reliable. They nearly never leak and are incredibly accurate.

Teflon capacitors provide excellent stability and minimal moisture absorption. It is noteworthy that they perform exactly the same throughout a broad range of frequency changes.

Click here to see this teflon capacitor on Amazon.

However, it is not advisable to use polycarbonate capacitors for most applications. They are recommended for timing and filtering circuits.

Click here to see this polycarbonate capacitor on Amazon.

How Do You Know If A Capacitor Has Polarity?

Additionally, polarized capacitors are superior to non-polarized ones since they take up less space on the circuit board due to their compact sizes.

A polarized capacitor must adhere to precise outline requirements to work. Thus, it must follow its configuration because it only works in one voltage direction.

It won't reach the necessary capacitance if you put it incorrectly. The capacitor may also develop internal gas pressure, resulting in catastrophic failure like small explosions.

Also, to prevent disaster, the capacitor needs to be appropriately placed. Remember that their capacitances may vary depending on the electrolyte types and fabrication techniques used.

These are the ways how you can determine if the capacitor has a polarity:

Length of the Pins 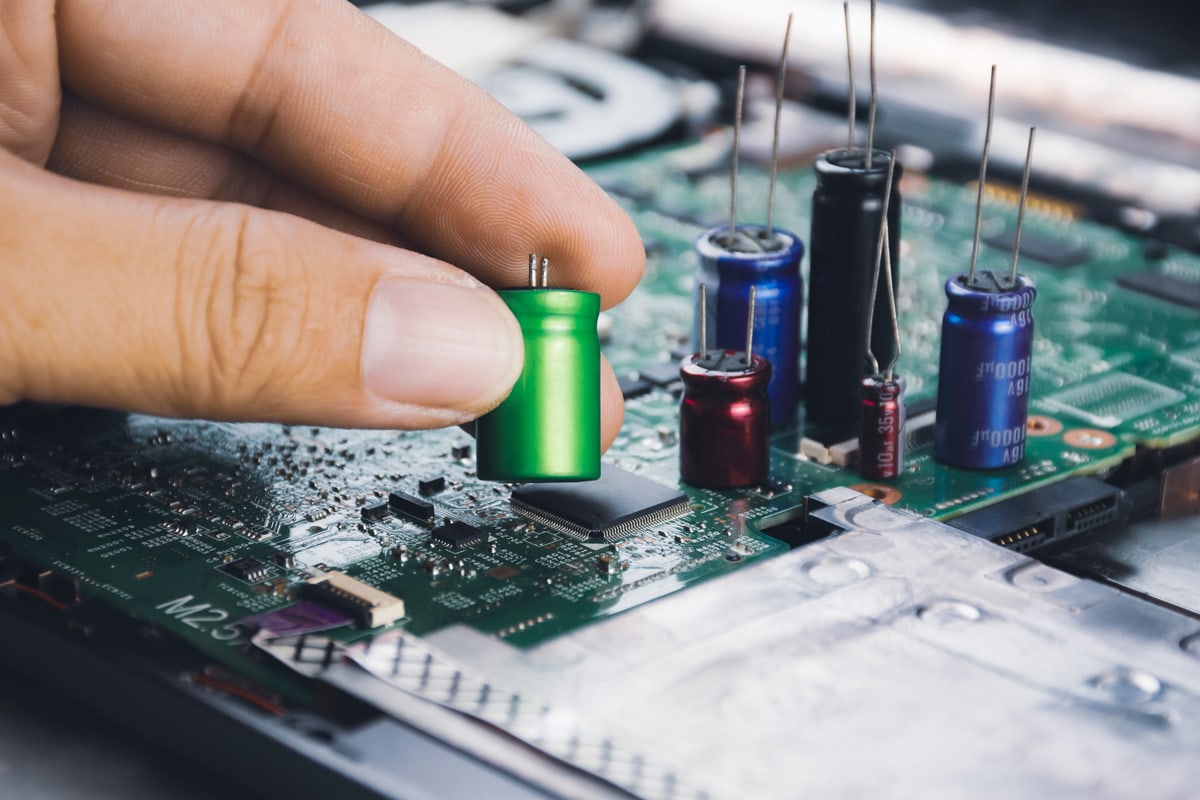 If the length of its pins is not the same, then it is a polarized capacitor. The longer pin or the anode represents the positive pole. On the other hand, the shorter pin, also known as the cathode, represents the negative pole.

Before putting a capacitor on a circuit board, it is crucial to determine the capacitor's polarity appropriately. 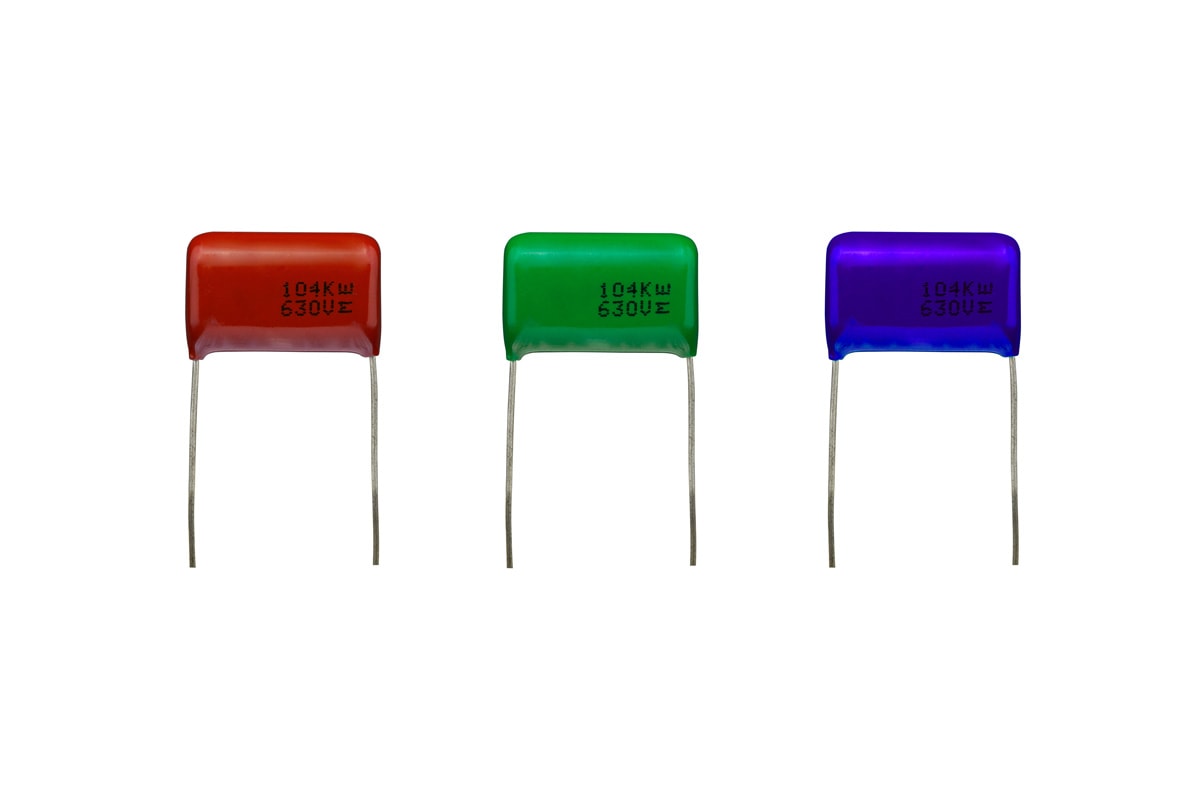 Electrolytic capacitors are polarized capacitors, and they are mainly made of aluminum. Its outer cover is a combination of gray and black. 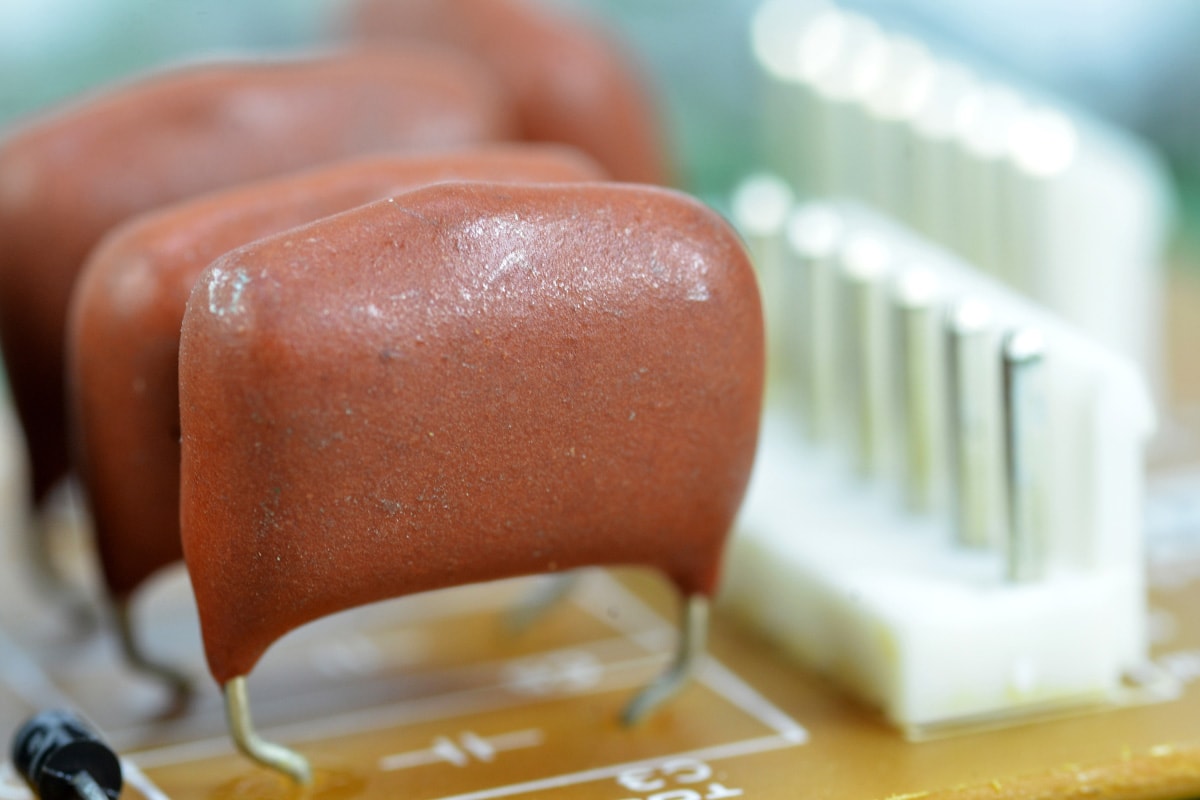 Using a multimeter to determine a capacitor's polarity is standard practice. We can guarantee the accuracy of the results by utilizing expert equipment.

The first is to assume that one is the anode and the other is the cathode. If the deflection of your meter rose to infinity when you attached the red pole of your multimeter to your assumed anode, then your assumption is correct.

Click here to see this AstroAI multimeter on Amazon.

4. Stripe in the Capacitor

The capacitor has a polarity if you happen to see a stripe in it. The stripe on electrolyte capacitors indicates the cathode end or the negative pole, while its opposite pole is positive.

Click here to see these electrolytic capacitors on Amazon.

Depending on the capacitor's size, kind, and capacitance values, they are utilized in various applications. Non-polarized capacitors are primarily used in oscillations circuits, coupling, and feedback.

They are best used in these applications because they have two electrodes that can be randomly introduced into the circuit and will not leak. Also, non-polarized capacitors increase their power factor.

Non-polarized capacitors with high voltages and huge capacity are employed in motors and power compensation. AC capacitors also have a reactance feature that can lower the voltage of a circuit.

AC capacitors are also used in the inverter output to filter the power supply used by your inverter.

How Do You Check Your Capacitor With A Multimeter?

The deflection should begin at zero and gradually increase to infinity. If the deflection is small or none at all, there is a large leakage current, and your capacitor is defective.

Can You Touch The Terminals On A Capacitor?

If the capacitors are within the circuit board, never touch their terminals because they are electrically charged and can be harmful. You may experience an electric shock due to physical contact with its terminals.

Also, remember that they still retain a charge for a while even if the switch is already off.

AC capacitors are non-polarized capacitors which means you can interchange their poles without worrying about damage to the circuit. Because of their durability and flexibility, they can be employed in many applications.

You can always determine the polarity of a capacitor by its appearance or by using a multimeter. As a result, you'll be able to identify the correct poles and finish operating your circuit as needed.

Trane Electric Furnace Blowing Cold Air – What To Do?

How To Reset LG PTAC Unit

How To Reset GE Zoneline

Can You Use A Window Air Conditioner Inside A Room?

Where Is A Heat Pump Typically Located?