Summertime brings two things: hot weather and a struggle between staying cool or keeping the utility bill low. In the effort to accomplish both, many people have turned the ceiling fan on to help the air conditioning do its job. But is this effective? We've researched this question and have come up with the answer.

This is a somewhat complicated topic with a lot of incorrect information, which is why we've compiled this guide. We'll help you understand what a ceiling fan does to a room, how it can support your air conditioning system, and how to get the most out of the fan. Plus, we'll answer a couple of other common questions about fans. Here we go! 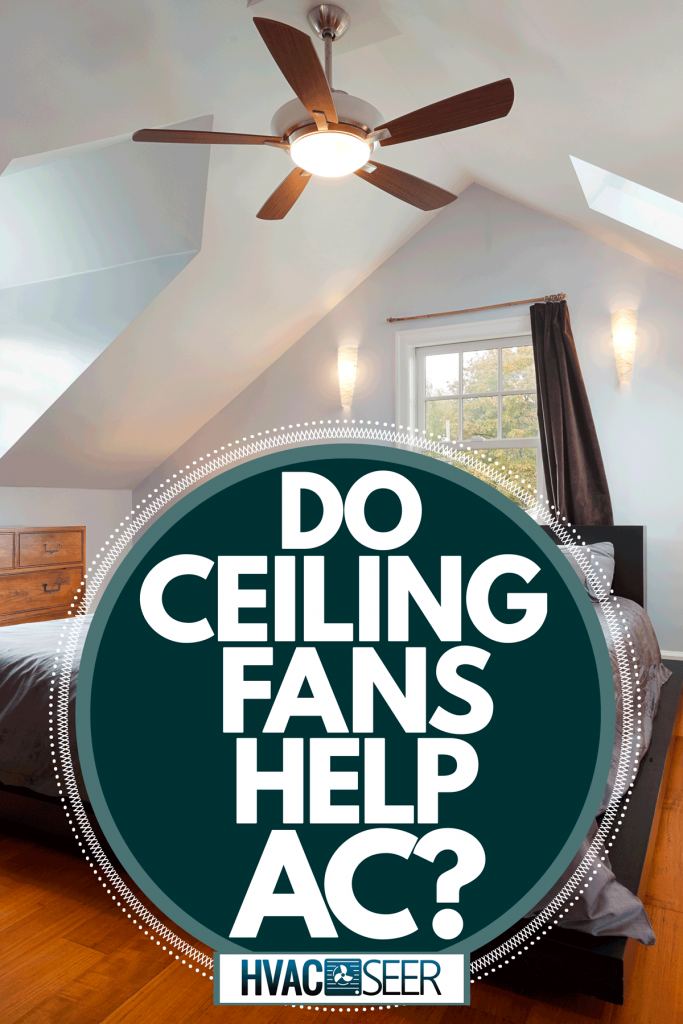 There are two main ways ceiling fans make your air conditioning unit more efficient and, thus, lower the cost of running it. Running an air conditioner can cost up to 36 cents an hour while a ceiling fan costs closer to one cent an hour. So, it's definitely an efficient trade-off if you have ceiling fans in your home.

When the ceiling fans support the air conditioner, you can set the thermostat at a lower temperature. Or, even if you keep it at the same temperature, your home will reach the desired temperature more quickly, so the system will shut off faster. Here are the two ways this works.

Ready for some science? A ceiling fan does not actually lower the temperature in a room. Instead, it heightens whatever the temperature is in the room by tricking our bodies into thinking it's cooler. The fan helps you feel cooler because the breeze evaporates the moisture from your skin more quickly.

Which Way Should A Ceiling Fan Turn With The AC On?

For the vast majority of ceiling fans, the blades should spin counterclockwise while the air conditioner is on. However, some fans are different, so you should pay more attention to making sure air is being pushed down while the AC is turned on. Test this by standing directly under it: do you feel a breeze? If so, it's turning in the right direction.

Have you ever noticed that the blades of a fan are angled slightly? This feature helps the fan force air upward or downward, depending on how you want the room to feel. Making sure the fan pushes air down (which, again, usually means it's spinning counterclockwise) creates that breeze that is mentioned above.

What many people don't realize is that most ceiling fans have a switch on the unit right above the blades. Flipping this switch changes the direction of the blades. In the winter, you want the blades to be forcing air up toward the ceiling. Hot air accumulates as high as it can, which means the ceiling of a room. Forcing air upwards then moves the warm air around the room.

Want more details about which direction your ceiling fan should turn? Check out this article for all you need to know: Should A Ceiling Fan Go Clockwise In Summer?

Is It Okay To Leave Ceiling Fans On All The Time? 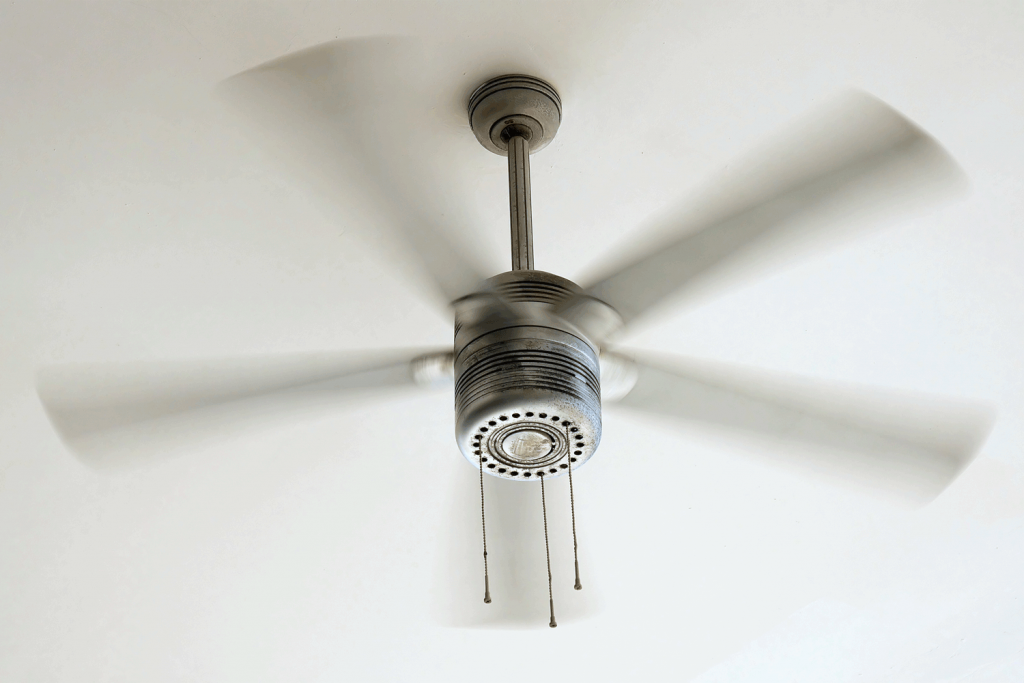 In general, the longer you run an appliance, the more wear you put on it. If you want your ceiling fan to last a long time, only use it when it will be helpful. Plus, leaving a fan on for hours at a time can cause it to overheat. Though ceiling fans catching on fire is uncommon (and you shouldn't be afraid to use it when it makes sense to), it's a bigger risk the longer a fan runs.

To avoid this, make sure the vents at the top of the fan are free from dust and make sure the wiring is secure. If you smell something burning or see sparks, turn the fan off and call an electrician immediately. For more information on ceiling fans and fire risk, read this article: Are Ceiling Fans A Fire Hazard?

Is A Ceiling Fan Or Stand-Up Fan Better?

As with most things in life, the better option depends on your needs and preferences. 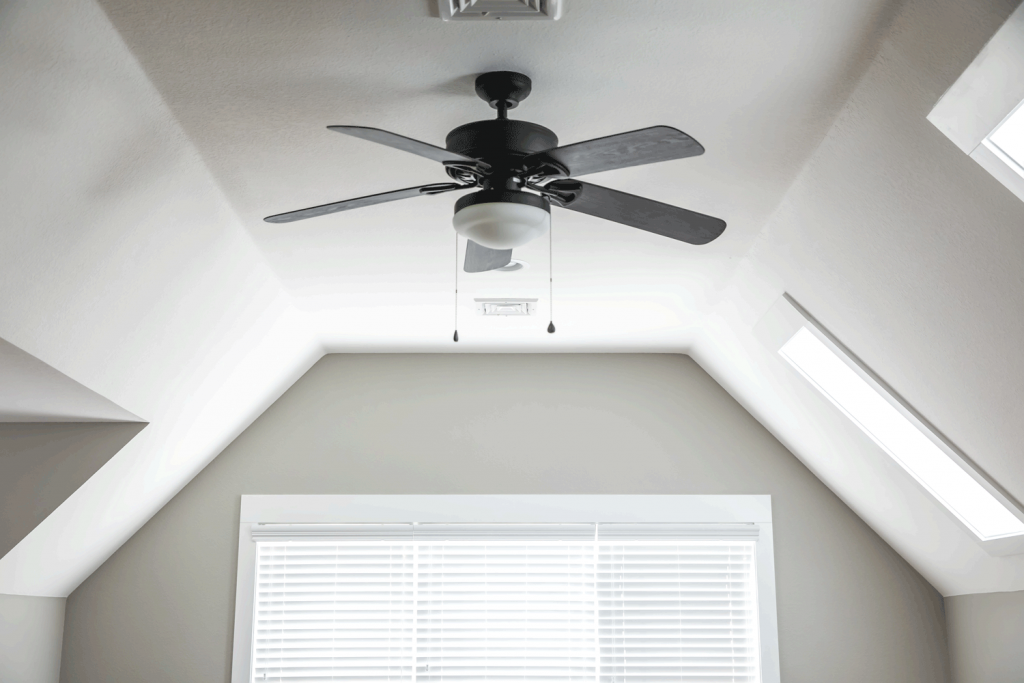 Ceiling fans are better for circulating air around a room. For the purposes of this article, they help make an air conditioning unit more efficient. This is because they're often centrally located and circulate 360 degrees. Stand-up fans, on the other hand, only oscillate a few degrees and are aimed horizontally.

Unfortunately, ceiling fans are not portable. They often cost more than stand-up fans and then have to be installed, which can be an expensive hassle. Here are a couple of popular types of ceiling fans:

Click here to view this ceiling fan on Amazon.

Click here to view this ceiling fan on Amazon.

Stand-up fans are portable, so you can take them from room to room with you. You can aim them at a specific target, usually yourself or a friend, to get the maximum wind chill effect. They also don't require any installation and are cheaper.

However, if you're looking to make a room cooler for everyone, a ceiling fan is the better option. It will more quickly change the feeling of a room. Plus, most stand-up fans can't change the direction of their spin, so they cannot support your heating unit. Here are a couple of popular stand-up fans available for purchase:

A ceiling fan can help your air conditioning feel cooler, which means the AC system doesn't have to work as hard. Because of this, it will make your air conditioner more efficient. The fan will distribute the cool air around the room, and the breeze will help you feel cooler. Keep in mind, though, that a ceiling fan doesn't actually lower the temperature; it simply makes the room feel cooler by creating wind.

We hope this article has helped you understand how to get the most efficient use out of your AC system. Good luck, and stay cool!

How To Clean A Bryant Air Conditioner

Can Tyvek House Wrap Be Used On Interior Walls?

How To Insulate A North Facing Room

Lennox VS Trane Heat Pump: Which To Choose?

Do You Need A Boiler For Electric Heating?