If you're considering putting a vented gas fireplace in your home, but don't have a chimney in place, you may be wondering if it's even possible. At least, without a hefty remodeling bill. After checking with fireplace specialists, we have the answer, though you should always follow specific instructions from your fireplace manufacturer.

Vented gas fireplaces do require some kind of ventilation - but not necessarily a chimney. They can vent through a flue in an exterior wall, which is generally easy to install.

So what's the difference between a flue and chimney? Does a flue remove toxins as efficiently?  Keep reading to learn more about vented gas fireplaces. 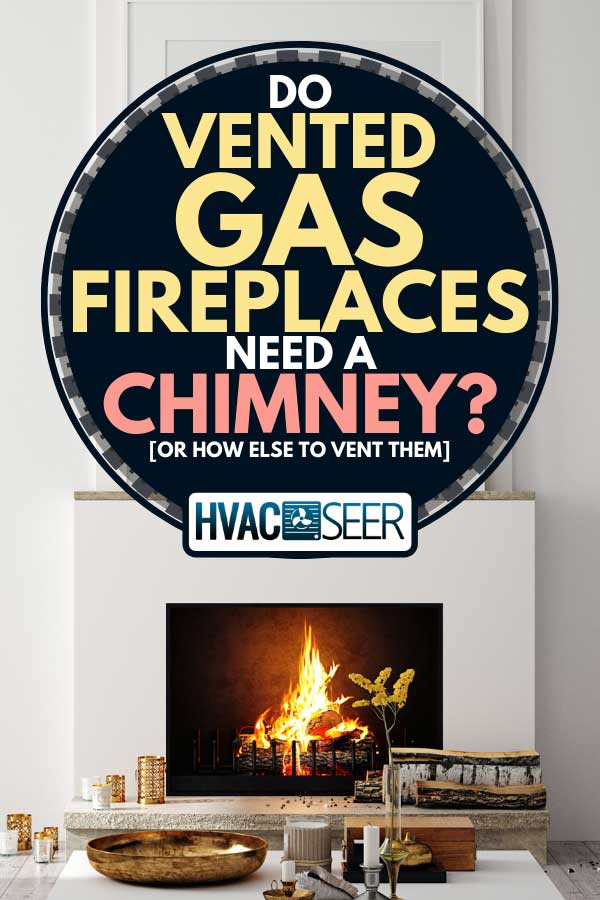 What is the Difference Between a Chimney and a Flue?

What is the difference between a chimney and a flue? A chimney is generally made of stone or brick and is the visible stack about the roofline (though it may start elsewhere in the house, particularly in a multi-story house). A flue is a space whereby combustible gases and smoke created by a fire can escape through to the outside.

What About Carbon Monoxide?

A flue without a chimney is just as suitable as one with a chimney, as far as the ability to vent toxins such as carbon monoxide. There's no real concern with using a duct, pipe, or any other system as long as it meets your fireplace manufacturer's specific directions. You can (and should) always install a carbon monoxide detector that will alert you to any problems with your fireplace's ventilation. Most local building code has specific requirements regarding the use of at least one carbon monoxide detector in a residence (or sometimes more).

You can also ask your contractor to install an oxygen-depletion sensor in your fireplace (or buy a model that already has one). This automatically will shut off the fireplace if it detects too much carbon monoxide.

There are three kinds of vented gas fireplaces. Most gas fireplaces (90% of current sales) are direct-vent. The second most popular is called natural vent (sometimes referred to as b-vent). The third kind, called a power vent, is uncommon.

The direct-vent system has a vent with two chambers. One takes in air from outside the home to fuel the fire, the other releases the smoke and toxins back to the outside. It can vent vertically or horizontally. Some homeowners prefer the horizontal vent, as it releases the smoke up into the air. It may also be considered more aesthetically pleasing, though this is a matter of preference. Direct-vent is the safest and most energy-efficient vented option.

The natural vent pulls its fresh air from inside the home, though it still releases the smoke and toxins outside the house through a duct. It can only be vented vertically.  They are also less efficient and sold far less often than the direct-vent systems.

Even more uncommon than the natural vent is the power vent. Use a power vent when you try to place a gas fireplace in an awkward spot (such as along an inside wall). If the ductwork runs through a significant portion of the house before reaching the outside, it can be challenging to get the exhaust to filter outside and away from the home. Power vents incorporate a fan system to help push the exhaust outside.

There may be instances where venting a gas fireplace would be very difficult, especially if you are trying to put the fireplace against an inside wall (requiring excessive ductwork). In some areas, there may even be codes that limit the amount of flue duct that you can install. You may not be able to put a fireplace in the location you want and be able to vent it outside while meeting building codes safely. In those cases, you may consider a ventless system.

Assuming ventless fireplaces are safe, there are pros and cons.  They are very efficient, do not require venting, and can be placed anywhere in the home.  However, they do release moisture into the air. This can cause mold and mildew issues, particularly in already damp climates. Some people do not like the look or ambiance of them (the flame produced is different than the flame by vented fireplaces).

It's important to note that they don't require venting because they use much smaller amounts of combustible gas to produce a flame-but they still use (and release) some into the home. People with asthma sometimes find that these small amounts of unvented gases are irritating.

Some studies question if these gases are safe, and they are banned in Canada and California (along with many other individual municipalities). They shouldn't be used in bedrooms, according to the National Association Certified Home Inspectors. It's very important-as always-that you install a ventless fireplace according to the manufacturer's specific instructions.

How Long Can You Run a Vented Gas Fireplace?

A vented fireplace can run continuously, as long as the front glass doors are sealed (though, for safety reasons, it should be turned off when unattended). Because of the venting, there are no concerns about over-use (unlike ventless fireplaces, which require an open window for prolonged use and should be turned off altogether after 3 hours.). While the fumes are not a concern, the front glass can still heat up to 500 degrees and needs to be monitored to reduce burn hazards.

You may have heard mixed statements on whether or not vented gas fireplaces are efficient. One drawback to vented systems is that any vent does allow heat to escape, reducing their efficiency. The method that you choose (direct-vent, natural vent, or power vent) will play a significant role in how efficient the fireplace can provide heat.

It does lose a bit of heat compared to a ventless system or electric, which can both be nearly 100% efficient. However, ventless fireplaces are illegal in some areas, such as California. Electric fireplaces, while more efficient, may cost more in operation. You will have to compare the price of natural gas and electricity for your region to determine if there is any significant difference in the cost of operating one fireplace over another.

A gas fireplace can be vented outside through a duct or pipe and does not require a chimney. The most common, safest, and efficient gas fireplace is the direct-vent system. For a fireplace that is more difficult to vent correctly, a power vent may be the best option. You should always check with a fireplace specialist and follow all manufacturers' instructions strictly.

What’s The Best Furnace For A Mobile Home?

Can You Mount A Ceiling Fan Directly To A Joist? [And How To]

My Woozoo Fan Won’t Turn On – Why And What To Do?

Which Vents Should Be Open In Winter?

Can You Add Zones To An Existing HVAC System?