Generators are commonly used as backup power systems. If your generator fails, the first thing you need to check is the fuse. We have taken the time to investigate and provide you with the exact location where to find the fuse.

Generator fuses are generally located somewhere in the battery bay or on the control panel. Depending on what type of generator you have, you may also find them in the area where the electrical connections are made. You can also check your generator's user manual for your specific model's fuse location.

Fuses are most likely the culprit whenever your generator fails. They are the first line of defense against current overload. Knowing where the fuse is located is important so you can immediately replace it if it's busted. Read on as we share some tips on how to know if your generator fuse is failing and how to deal with it. 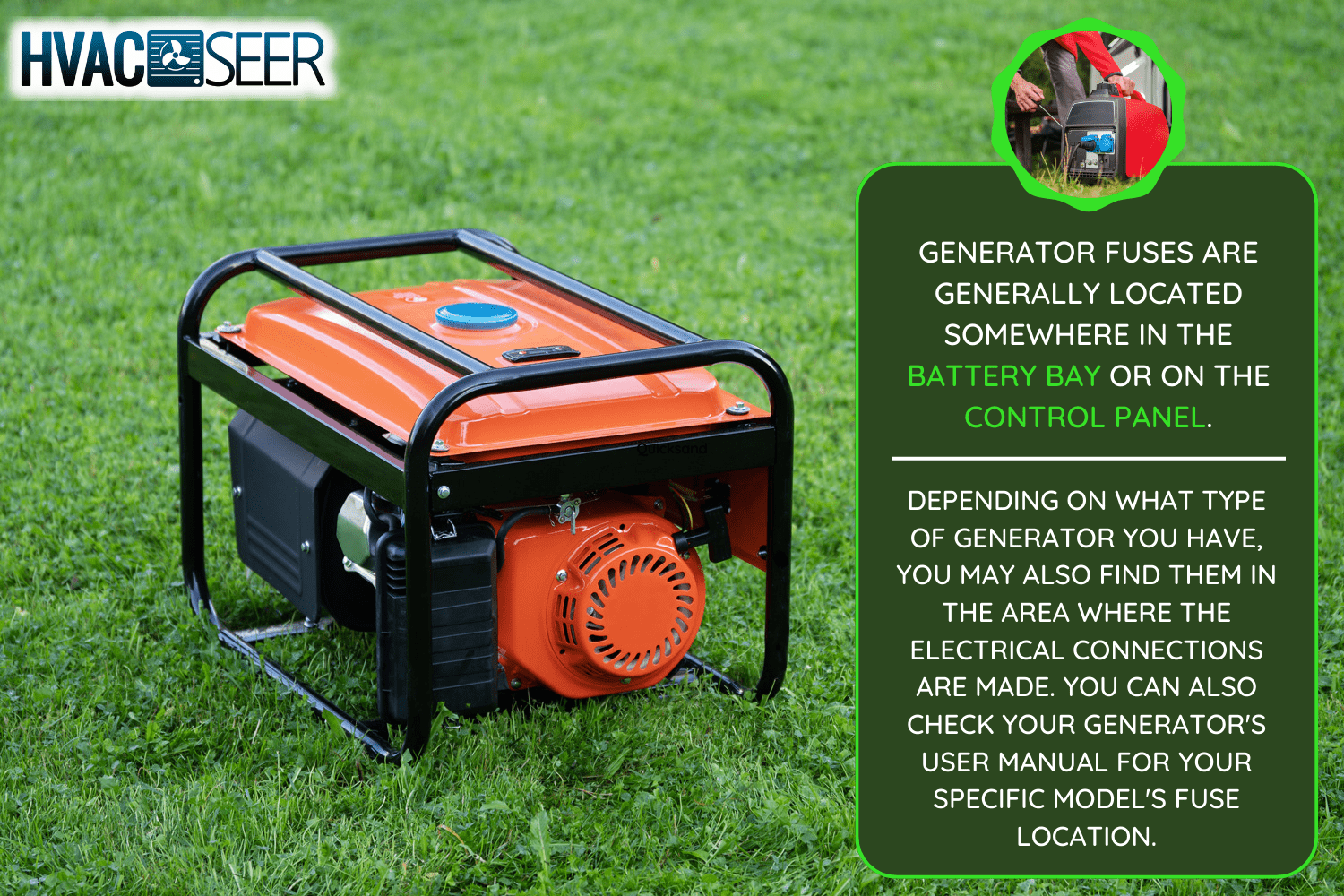 What Is A Fuse?

Fuses are devices used to control current flow in electrical circuits. They are used to break the circuit when the current reaches a certain level.

Fuses help to ensure that electricity is distributed to the correct location and that it is properly shut off when it is no longer needed. They protect your device by preventing overloading and overheating.

The voltage will rise until it reaches a level that can't be sustained, and the power source will shut down. This will happen either immediately or as a gradual process.

Why Does A Generator Need A Fuse? 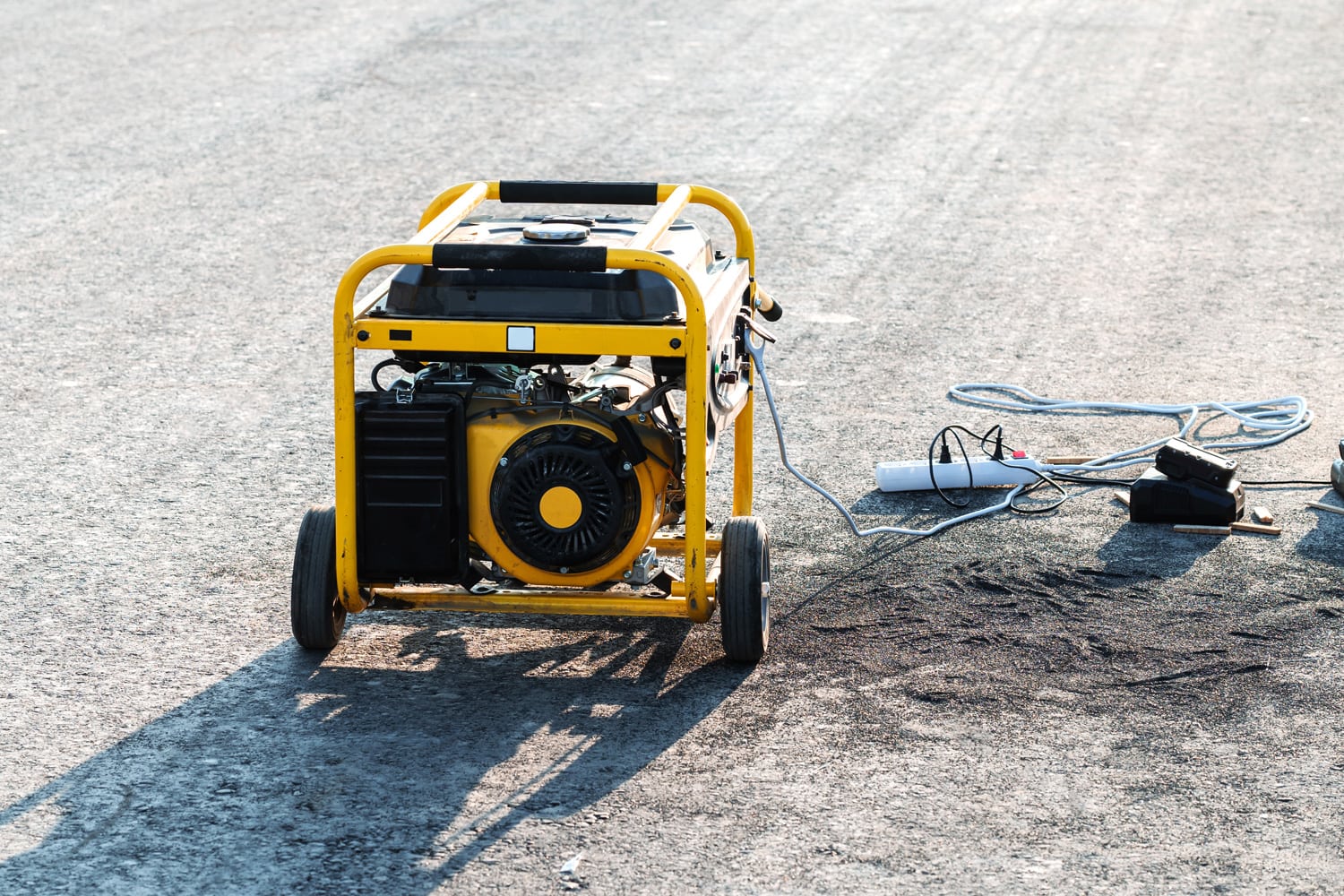 A generator produces electricity by converting mechanical energy. When the generator is turned on, it produces an alternating current (AC) that is used to power the devices connected to the power supply.

Generators are designed to operate safely at a variety of different input voltages. However, they can fail if their input voltage exceeds the design limit.

A fuse is made of either a thin wire or a flimsy material (fusing element) made of or a combination of any of the following materials: zinc, silver, aluminum, or copper.

A filling powder is also enclosed in a glass with two brass end caps on both ends. Filling powder can be chalk, quartz, marble, or any suitable material that can sustain current without producing too much heat.

Fuses are commonly found in the battery compartment and on the back side of the control switch. If a fuse blows, you should immediately shut off the power supply.

The video below shows where to locate the fuse for a typical Honda generator:

Generator Running But Not Generating Electricity - What Could Be Wrong?

There are many things that can cause a generator to run but not generate electricity. The most common thing is that the breaker has tripped. If the breaker is tripped, there is a problem with the electrical system in your generator.

Replace the broken fuse and reset the breaker. Make sure that all the connections are snug. If the power is still not working, then you will need to contact a licensed electrician for assistance.

How To Replace Generator Fuse

Generator fuse replacement is one of the least glamorous of all home maintenance projects, but it's probably the most important one.

Replacing a fuse in your generator is fairly easy. Simply remove the cover of the battery compartment or the control panel and locate the fuse. You'll know if the fuse needs replacement if the fuse is melted or looks like it's been burned out.

How do you know when your generator fuse has burned out without inspecting it? You'll know if you have a broken fuse when the power generator lights go out and the power goes off intermittently.

Just a caveat: inspecting the fuse before replacing them is an important part of making sure that you have the right fuse type for your generator. 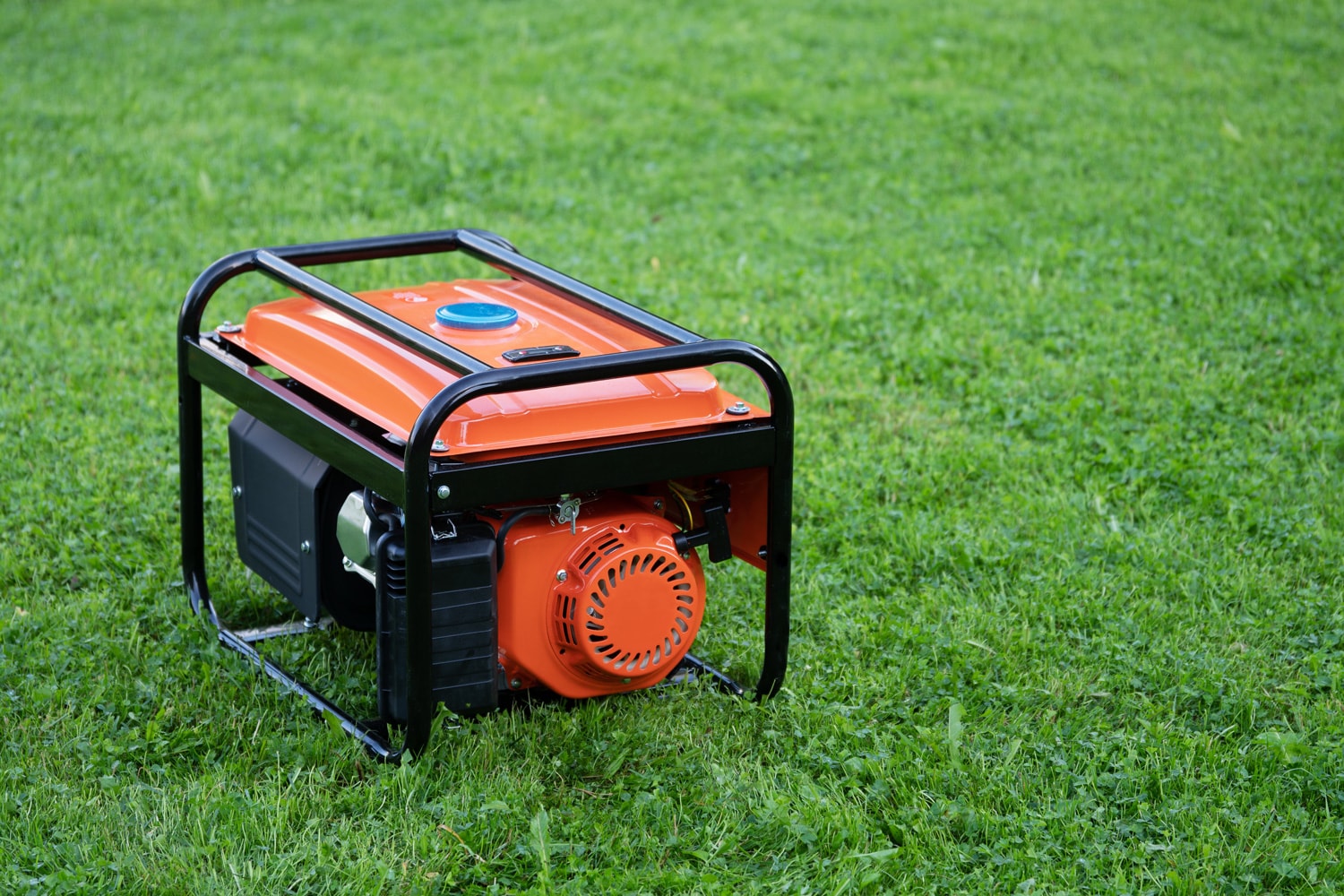 How To Reset Circuit Breaker

What Is The Most Common Issue That Generator Owners Face? 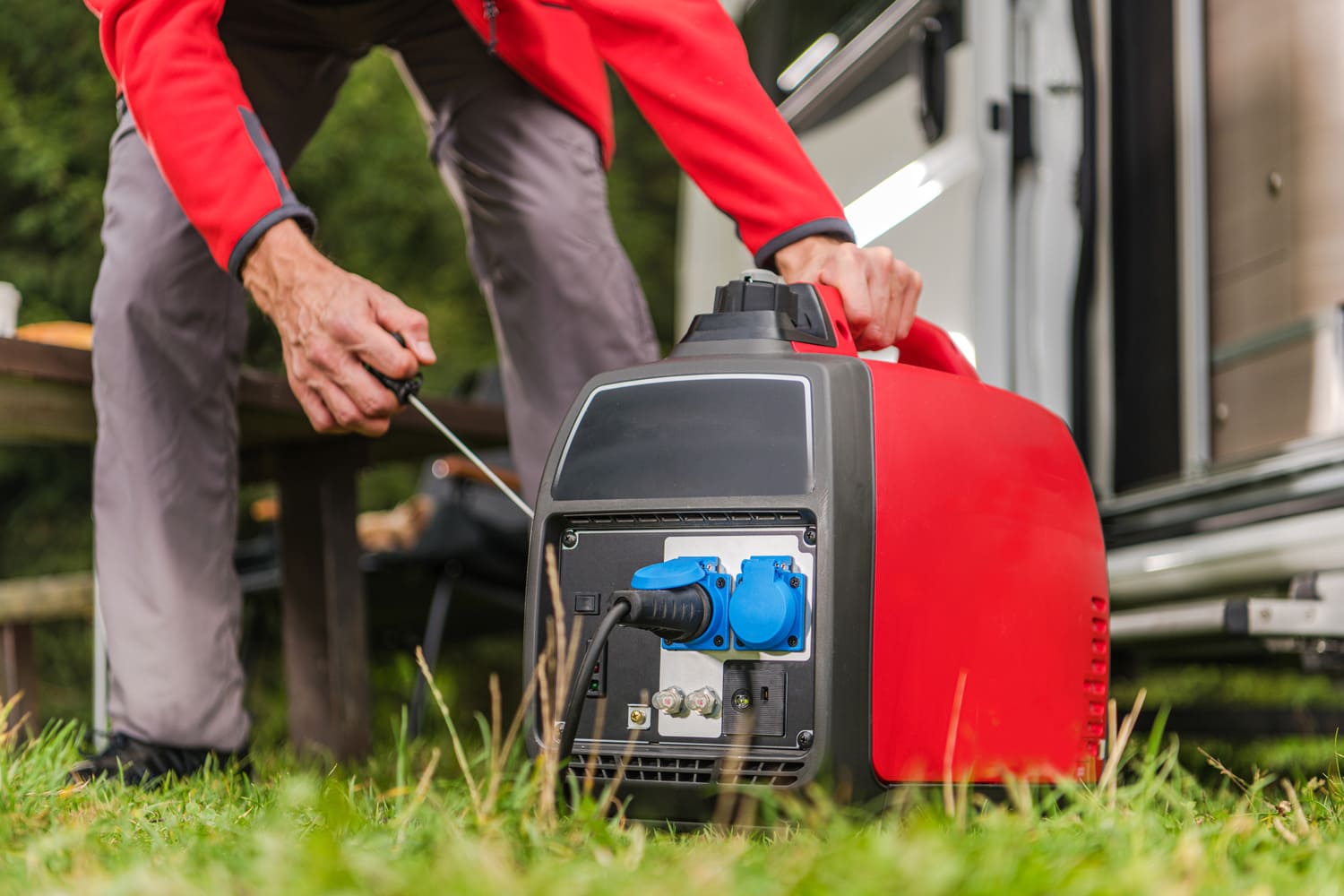 Neglected maintenance can cause problems, which can eventually lead to major ones. In fact, it is the most common cause of mechanical and electrical problems. Here are some reasons why your generator may need to be serviced.

It's important to know how to properly clean and maintain your air filter. The best way to do so is by using a vacuum cleaner. It's a convenient way to suck up all the dust, dirt, and debris from the air filter.

It could be time for an oil change. The lubrication of a generator relies on the use of engine oil. As it circulates through the generator, it helps to reduce friction and prevent wear and tear. You should know when it's time to change the oil in your generator.

Clogged fuel lines can be prevented by using a fuel line snake. It's a tool that is used to clear out any obstructions in your fuel line.

Check out this generator oil on Amazon.

How Much Cost To Repair Generator?

A generator can be costly to fix. Whether you're talking about a portable generator or a standby generator, you're looking at between $60 to $600.

A generator is a complex machine and anything can go wrong with it, especially if you're using it as your main source of power. If you notice the engine is not turning over after sitting for years, there's a good chance it's going to cost more than $65 to recondition it. Air filter, oil, and new battery replacements may cost you $60.

How Many Hours Can Generators Run Without Needing Major Maintenance?

The lifespan of a generator is dependent on the type of fuel being used, how it's being stored, and the environmental conditions in which it operates.

Generators used to power a commercial building or a large event venue may be exposed to extreme temperatures, heavy use, and extended periods of time.

In addition, generators that are located outdoors may be subjected to intense weather conditions. These conditions, in turn, shorten the life span of a generator.

On average, a diesel-powered generator may run up to three years (30,000 hours) without the need for major maintenance. Generators powered by gasoline can run for 1 year (10,000 hours).

How Often Should Generators Be Serviced?

If you're looking to buy a generator, you may be wondering about the maintenance and service needs. You can find information about this in the manual of your generator.

However, you should know that even though they last for a long time, they're not indestructible. They can wear down after being used regularly.

It's important to remember that generators aren't meant to operate continuously. They need to be inspected and serviced regularly. Ideally, "regularly" here means at least once a year.

Whether you plan on using your generator for power on a regular basis or only during a power outage, you need to ensure that it has been serviced regularly. A generator that is sitting idle needs regular check-ups too as it can develop gunk and clog the fuel line.

Can You Use Tarp To Cover Generator?

If you live in an area where power outages occur frequently, chances are you've been told to cover your generator with a tarp to protect it from the elements. This is an effective measure to prevent the rain and snow from damaging the generator and other components.

However, tarps are not customized to fit generators and are usually too large for that purpose. The following are some of the reasons why tarps should not be used to cover generators:

Tarps are heavy and bulky, and they add more weight to the generator. This increases the load on the motor and makes it work harder.

Check out this generator cover on Amazon.

The fuse is typically located somewhere on the generator, it is most likely in the battery bay or control panel. You should see at least one fuse. If you can't find it there, you can also check your generator's user manual.

What Size Generator Do I Need To Run A Space Heater?

How To Cool An Attic Bedroom [6 Methods To Try]

Mr. Cool Vs. Goodman – Which To Choose?

How Often Should I Use A Humidifier For My Plants?

How Long Should A Heat Pump Run Per Day?