Having vents and ceiling fans in a room can significantly improve the temperature in the area. If you plan to install a ceiling fan in a room that already has a vent and wonder just how large the gap should be between the ceiling fan blades and the vent grille, we have researched to provide you with everything you need to know!

This measures from the outermost corner of the fan blades to anything surrounding the fan, including ceilings and walls. 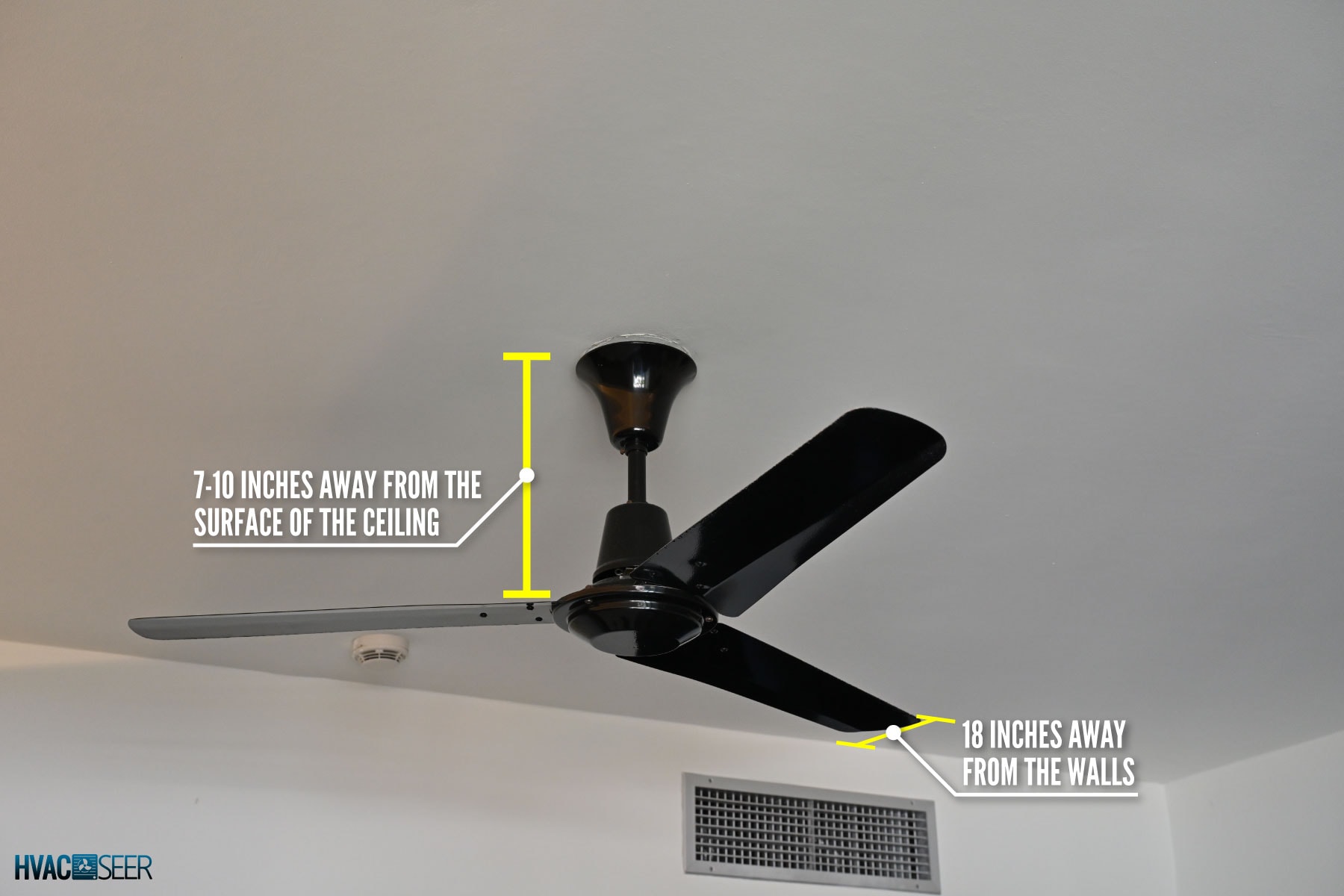 Vents are ceiling fans are great devices to have in your living space if you want to bring the temperature down during the warm season. Having a vent and a ceiling fan installed in the same room can be more efficient in cooling the space down instead of just having one.

Continue reading as we discuss more important details that you will need when installing a ceiling fan next to a vent.

How Far Should I Install A Ceiling Fan From A Vent?

Ceiling fans should be installed within a certain perimeter that will allow for the safety of the people who use it, as well as the objects around it.

This is because most ceiling fans have large and exposed blades that, when displaced, can cause injury to a person or damage to nearby furniture.

You must observe no specific length when placing a ceiling fan near a vent. However, the general rule is to install a ceiling fan at least seven inches from the ceiling's surface and at least eighteen inches away from any objects or walls.

If you are planning to place a ceiling fan near a vent, you can choose to adhere to this guideline or one or two inches more.

The ceiling fan can boost the dispersion of the warm or cool air coming out of the vent and towards a wider area of the room.

Does Putting A Fan Next To A Vent Help? 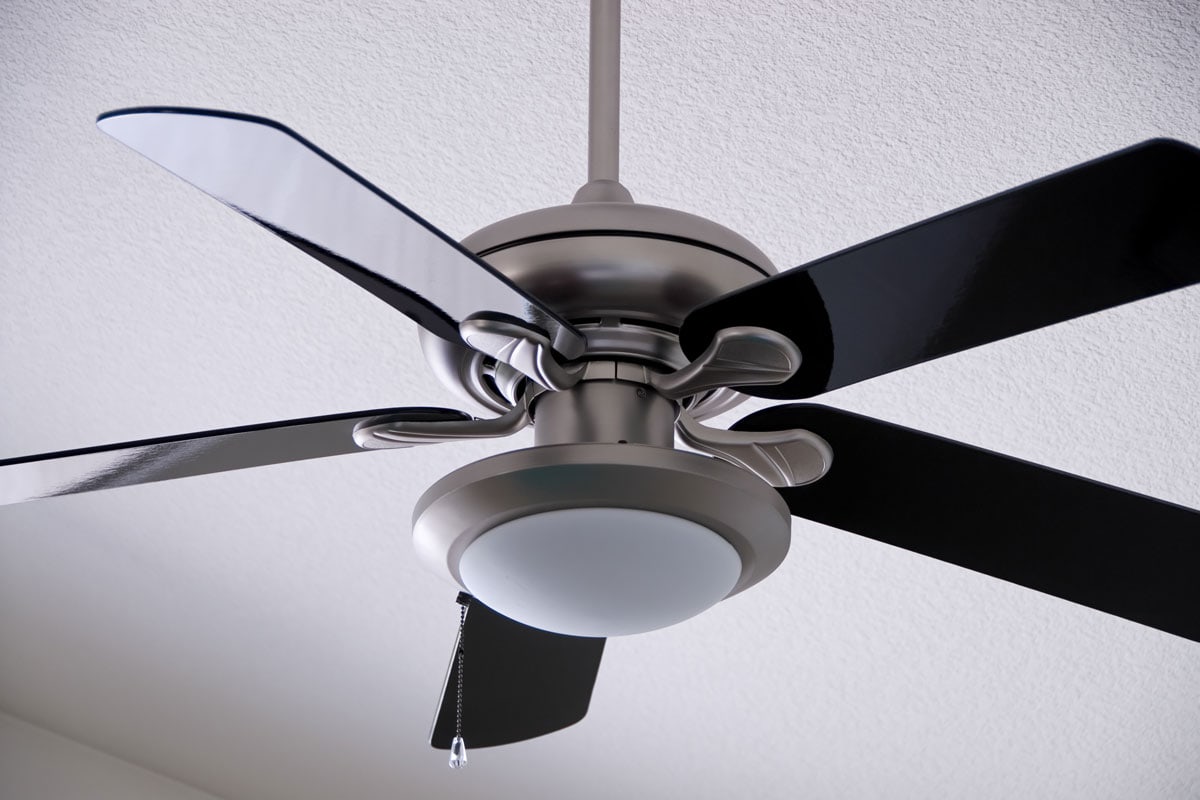 Putting a fan next to a vent will increase the airflow in your room. There is very little difference between if the vent is for an air cooler or heater because the fan will circulate the air just the same.

However, you might want to change the direction of your fan's spin based on the weather's temperature.

Some fans with blades can be reversed, with one setting blowing the air in and another designed to blow the air out of the room. This type of fan blade can usually be seen in exhaust fans, which could be attached to the ceiling or the wall.

The fan blades could either pull the air inside a room and expel it outside or pull the air from outside and then disperse it indoors. If you have this type of fan, one setting would be fine if placed next to a vent, and the other could simply create a counterproductive cycle of airflow.

Having an exhaust fan next to a vent would be as helpful as a ceiling fan, as long as the exhaust fan pulls the air from outside and brings it in.

Otherwise, if the exhaust fan pulls the air from inside the home and then expells it outside, the warm or cool air that the vent provides will also be discharged outside.

What Direction Should A Ceiling Fan Spin Close To A Vent? 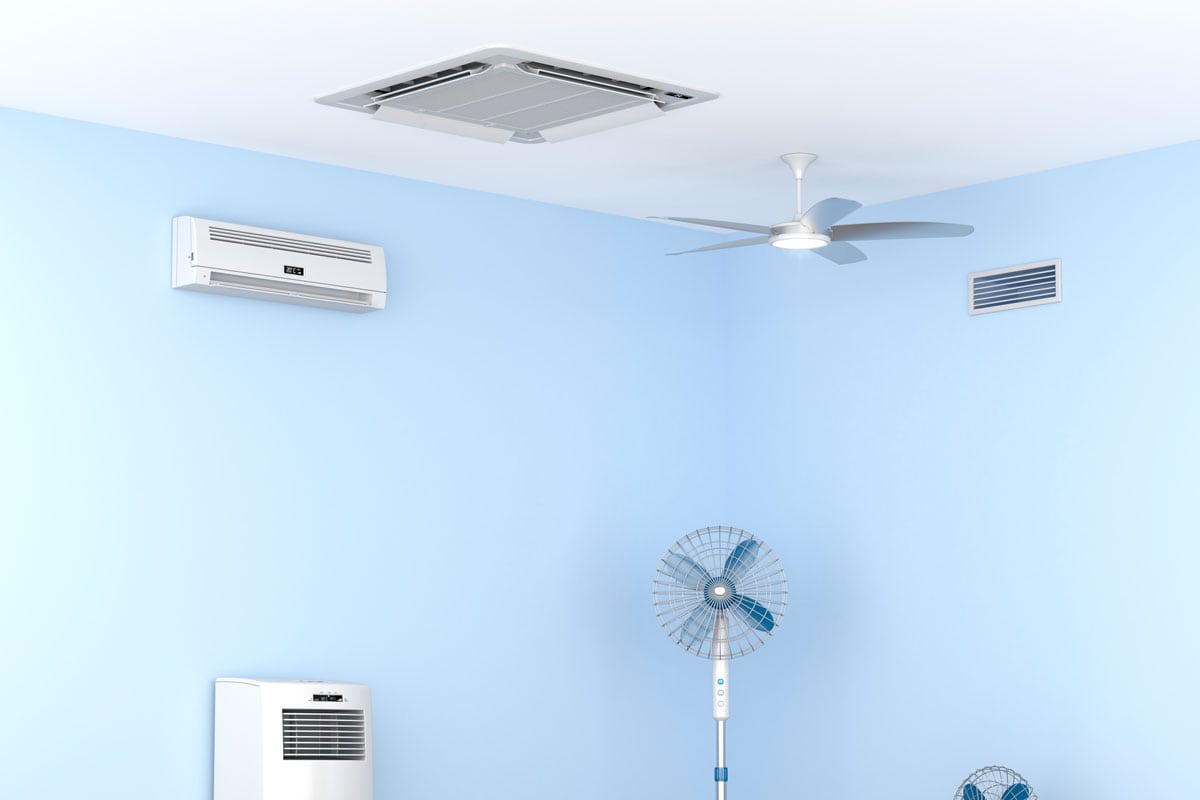 There is no set rule about where your ceiling fan should spin when it is close to a vent. This decision should be up to the personal temperature preference of the homeowner, as well as the current temperature of the season.

If you have set your central ventilation system to warm up your home during winter, then you can choose to keep the counterclockwise setting.

This direction of blade spin will circulate the warm air from the vent toward the lower part of the room while moving the cold air up toward the ceiling.

On the other hand, if the vent is releasing cool air to lower the temperature during the winter season, then you can switch up the spin of the fan.

This reversed spin of the fan will drag the warm air toward the ceiling while circulating the cool air to the descending part of the room.

How Far From The Floor Should I Install A Ceiling Fan?

Ceiling fans should be installed no less than eight feet off the ground. You can choose to mount it in the middle of the room to create an even circulation throughout the area.

Since there should be at least 8 feet of space between the bottommost surface of the ceiling fan and the ground, installing it in a room with a ceiling lower than 8 feet is not ideal or safe.

As we mentioned before, ceiling fans should have a gap of at least seven inches off the surface of the ceiling. Ceiling fans work by pushing the air from above the blades toward the bottom of the room.

When the air from the fan reaches the bottom, the air previously there will be pushed up toward the back of the fan and then back again toward the bottom. This process circulates the air inside a room. If there is little space between the blades and the ceiling, the fan will have little air to push down.

Similar to this, if the ceiling fan is installed in a room with a very low ceiling and too close to the floor, the air circulation will not be as efficient.

There is more flexibility when it comes to rooms with high ceilings. For rooms with ceilings higher than 9 feet, you can choose to allow more than 1 foot for the motor's casing.

This will allow the ceiling fan's motor to cool down easily compared to installing it so close to the ceiling's surface.

How Big Are Ceiling Fan Blades?

For any area larger than 400 square feet, you can choose to install either one 60-inch ceiling fan or two 52-inch ceiling fans. When installing two or more ceiling fans in one room, you should still observe the basic 18-inch clearance from the tip of the blades and any other object. 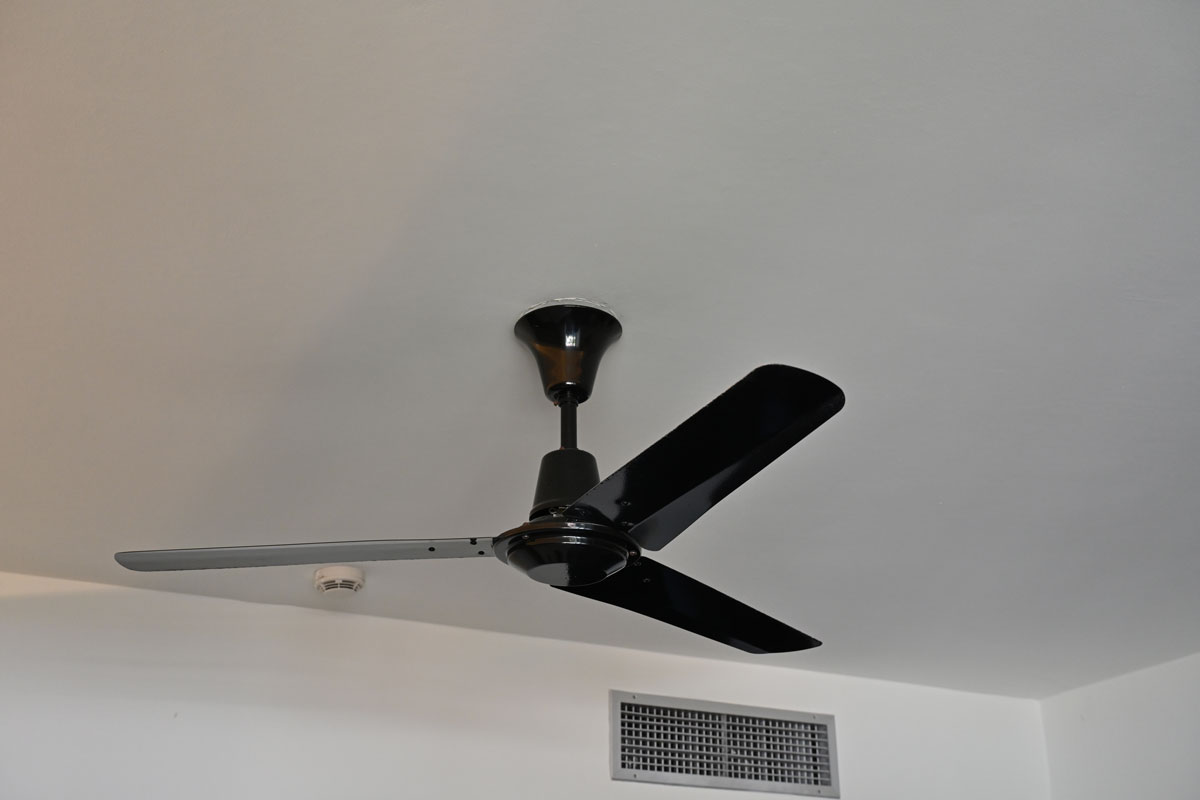 Ceiling fans and vents can increase air circulation inside a room. Installing both inside one room can quickly increase or decrease the temperature of a room because a ceiling fan in a counterclockwise setting can speed up the dispersion of the air from the vent.

In this article, we discussed the space that should be observed between a ceiling fan and vents. We also discussed if ceiling fans can help distribute the air expelled from the vents.

Make sure to leave enough space between a ceiling fan and any object around it to prevent injury and damage during operation.

Made it to the end? Check out some of our other related posts!

Do Duct Booster Fans Work To Increase Airflow [Are They Worth It]?

How To Vent A Bathroom Fan Through The Wall [Complete Guide]

How To Change A Run Cap In Goodman Air Conditioner Unit

How Long Does A Gas Fireplace Last?

Is Dyson Humidifier Evaporative Or Ultrasonic?

How To Set Or Program A Carrier Thermostat [In 7 Easy Steps!]