Come the hottest days of the year, you'll want to use every appliance at your disposal to keep your home comfortable. Just how long, though, can you continuously and safely run your ceiling fan? We've done the research to bring you the answer.

You can leave a fan running continuously for eight hours, on average, without worrying about unexpected ceiling damage or fires in your home.

That does not mean, however, that you want to push your fan to its limits. If you want to safely use a ceiling fan for an extended period of time, it's in your best interest to invest in regular ceiling fan maintenance. We've also dug up some alternatives ways you can safely circulate air throughout the whole of your home without putting your ceiling fan and surrounding belongings at risk. So keep reading! 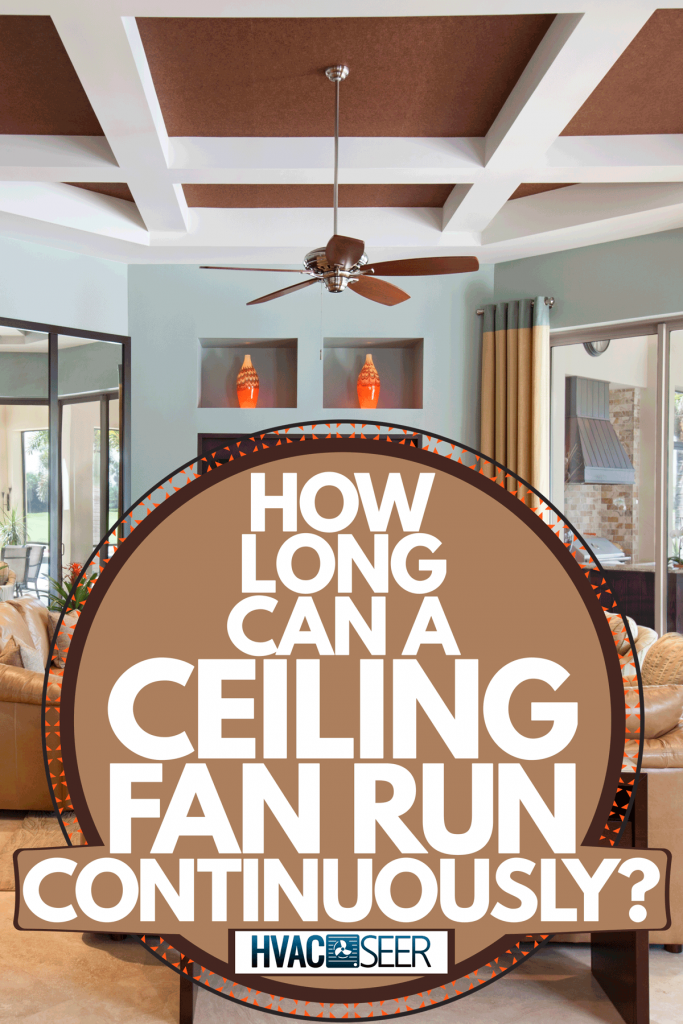 Contrary to popular belief, your ceiling fan doesn't actually keep your house cool. Instead, it helps keeps the air in your home from stagnating. When you run your ceiling fan, you benefit from the breezy sensation as much as you do the constant redistribution of warm and cool air throughout your home. 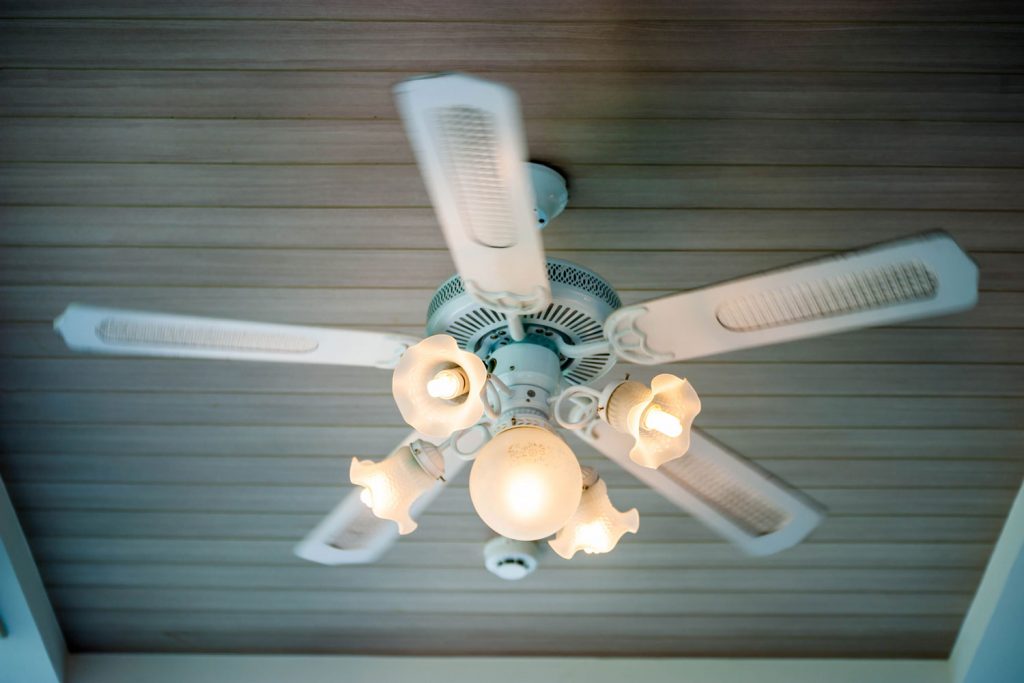 When it comes to determining how long you can keep your fan on without putting the safety of your home at risk, you'll want to consider the size and brand of the ceiling fan you have in your home. Each manufacturer takes a unique approach to the creation of its fans. In turn, it's best to consult that manufacturer's recommendations when considering whether or not it's a good idea to leave your fan on for an extended period of time.

On average, though, it's safe to leave your ceiling fan running for eight consecutive hours at a time. That doesn't mean you should panic if you ran out the door for work and forgot to turn your fan off, but you will want to give the fan's motor a break as soon as you get back home.

Can A Ceiling Fan Overheat?

If you leave your ceiling fan on for an extended period of time, it can begin to overheat. The moving parts that make up your fan will generate friction with one another, even if they are well-oiled. That friction, in turn, can release as heat. While the heat alone isn't immediately dangerous -- though it can cause significant fan damage in the long-run -- it becomes a more concerning force when paired with unique conditions throughout your home.

An overheating ceiling fan can cause unexpected damage in homes that find themselves contending with:

If you don't make a point of cleaning your ceiling fan on the regular basis, then it's going to collect dust, dirt, and all of the other grime that makes its way into your home. While a little bit of roughage isn't going to cause your fan any harm, an extensive build-up may.

Dust bunnies and their ilk are flammable. If your ceiling fan starts to overheat, these materials may catch a spark and eventually spread flames to the whole of your home. By cleaning your fan regularly, you're not only keeping your home clean but also preventing potential fire damage.

If you're recently thrown someone a birthday party, or if you're the type to get creative with your home decor, then you may have accessories like streamers or beads hanging from the blades of your ceiling fan. While these accessories can add some pop to the room, they are also a fire hazard. You'll want to remove these items as soon as possible or, at a minimum, refrain from running the fan while they're in place.

When you first have your ceiling fan of choice installed - or go about the installation work yourself - you'll want to determine what kind of care the manufacturer recommends that you invest in.

More often than not, ceiling fan manufacturers recommend that you lubricate your fan's moving parts at least three times per year. This can keep your fan from overheating while also ensuring that it continues to circulate air effectively throughout your home.

There is always a chance that your ceiling fan may not have been installed properly. If you think this may be the case, you'll want to keep an ear out for any rattling or sounds of improper connections. When in doubt, you can reach out to local experts to have someone inspect your fan and repair any missed connections.

How Can You Prevent A Ceiling Fan From Overheating?

All ceiling fans do get warm from time to time. The motors used to power these fans will naturally generate heat even as the fan blades themselves work to keep your home cool. It's only under certain circumstances that a ceiling fan's heat can transform into a dangerous force.

There are some steps you can take, however, to prevent your fan from overheating even during average, non-consecutive use. These include:

Is It Safe To Leave Fans On All The Time?

In general, it's not a good idea to leave the fans in your home on all of the time. However, do note that higher-quality fans or fans that have recently been cleaned pose less of a risk to the overall safety of your home. If you have the time, you may want to look over the overall security, make, and cleanliness of your fan before operating it for an extended period of time.

If you want to ensure that the air in your home circulates at a regular pace, there are other options available to you besides ceiling fans. Your HVAC system may have a setting designed to help circulate that air through your home even without heating or cooling the air itself.

Alternatively, you may be able to switch between operable fans in your home on a regular basis, ensuring that at least one fan is running at all times. This way, you can remain comfortable in your home without taking on any risk.

That said, you can leave your fan on for a reasonable amount of time while you or someone else is at home. Most of the time, you can run a ceiling fan for up to eight hours without seeing any detrimental effects. If you're not sure how long you can safely run your ceiling fan for, take a look at the manufacturer's recommendations and proceed with caution.

You may be tempted, in light of ceiling fans' dangers, to try and supplement your internal temperature control with a box fan. While this isn't a bad idea and can help you maintain your ceiling fan, box fans come with their own sets of dangers.

Box fans, in particular, can often become fire hazards if left on continuously. These fans can often pose more of a threat to your home than just ceiling fans, as their immediate connection to electrical outlets can see them spark and set valuables within your home alight. If you leave a box fan on at night or while you're away at work, then there's a chance you won't have the time to react to a sparked fire before it does significant damage to the whole of your home.

There are steps you can take, however, to try and prevent a box fan disaster. Ideally, you'll want to make sure that the box fans you bring into your home have been tested for usability and against international safety standards. Take a gander at box fan reviews and determine for yourself whether or not a box fan may suit your needs. When in doubt, keep an eye out for a CE sticker, which will typically indicate a box fan's durability and home safety.

Maintaining the ceiling and box fans in your home can be more complicated than you might imagine. While it's tempting, especially on hotter days, to leave these fans on all day, doing so can put the safety of your home at risk. A ceiling or box fan that runs for an extended period of time can heat up to the point where any nearby dust, grime, or flammable objects may catch on fire.

With that in mind, remember to turn off your ceiling and box fans at regular intervals. There are other means through which you can keep your home comfortable that it won't put you at risk for a ceiling fire.

Types of Furnaces and Furnace Filters

Humidifier Not Working – What To Do?

How Big Is A Rick Of Wood?

How To Insulate An Aluminum Patio Roof [A Complete Guide]