It’s the summer season, and you plan on using your ceiling fan continuously. But you might also find it worrying to run the fixture for the entire day. So how much will it cost you to run your ceiling fan? We researched the answer to this question, and here’s what we found.

Ceiling fans will typically cost an extra $2.16 per month for each unit that’s running continuously. In comparison, an air conditioner will generally require households to spend an additional $388.80 per month to cover that appliance's usage.

Take note that some ceiling fans are even more efficient than others, thanks to their fairly high-efficiency ratings. Continue reading as we talk more about this measurement. We'll also tackle the costs of running a ceiling fan in greater detail. 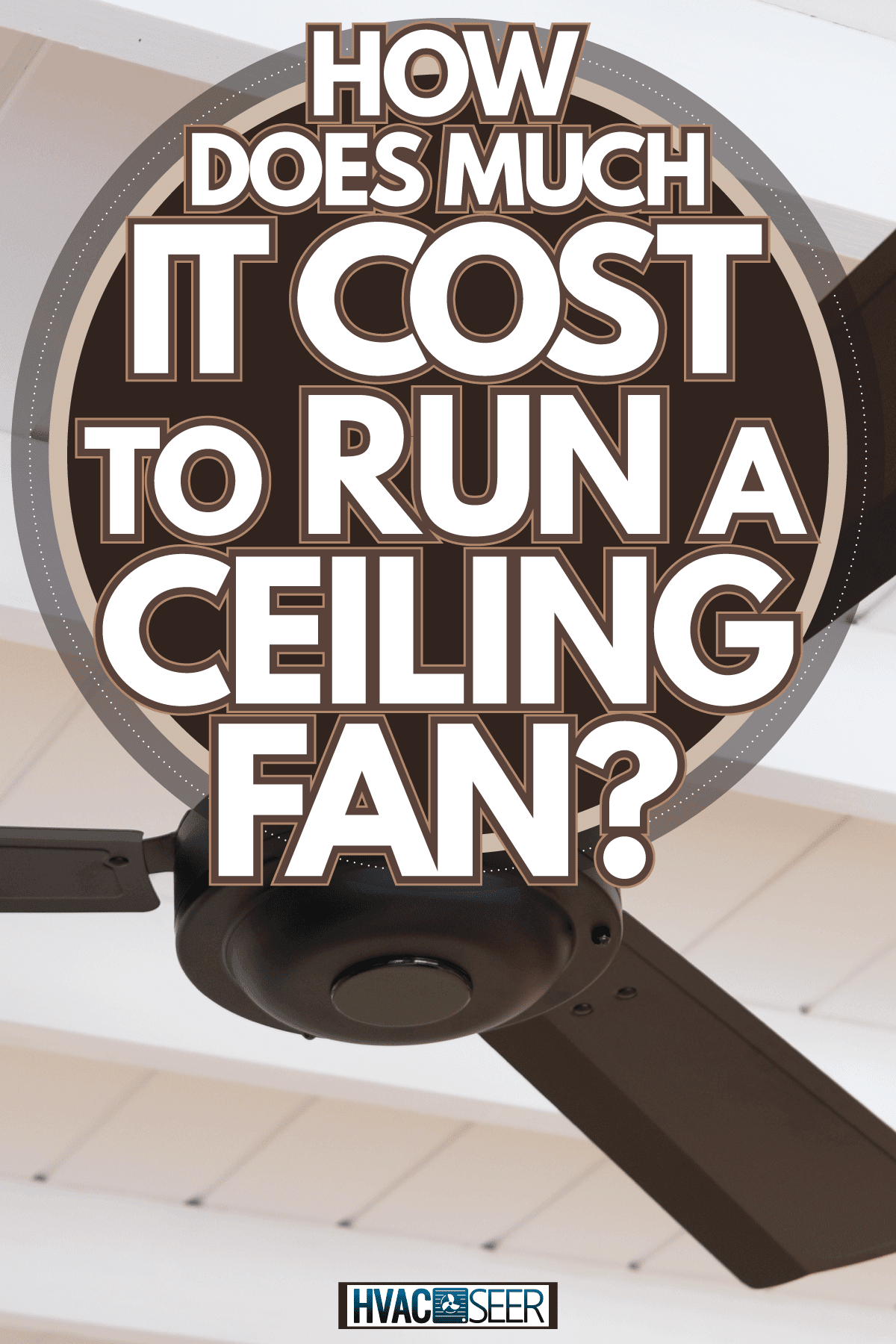 Does It Cost A Lot Of Money To Run A Ceiling Fan?

Generally, running a ceiling fan will only cost about $0.003 per hour. So leaving the fixture on for 24 hours should only increase the energy bill by $0.072. That also translates to an extra $2.16 per month for the property’s electricity bill.

In contrast, running an air conditioner costs about $0.54 per hour. Using that appliance for an entire day will increase a home’s energy bill by $12.96. If used non-stop for an entire month, running the AC will require property owners to pay an additional $388.80. 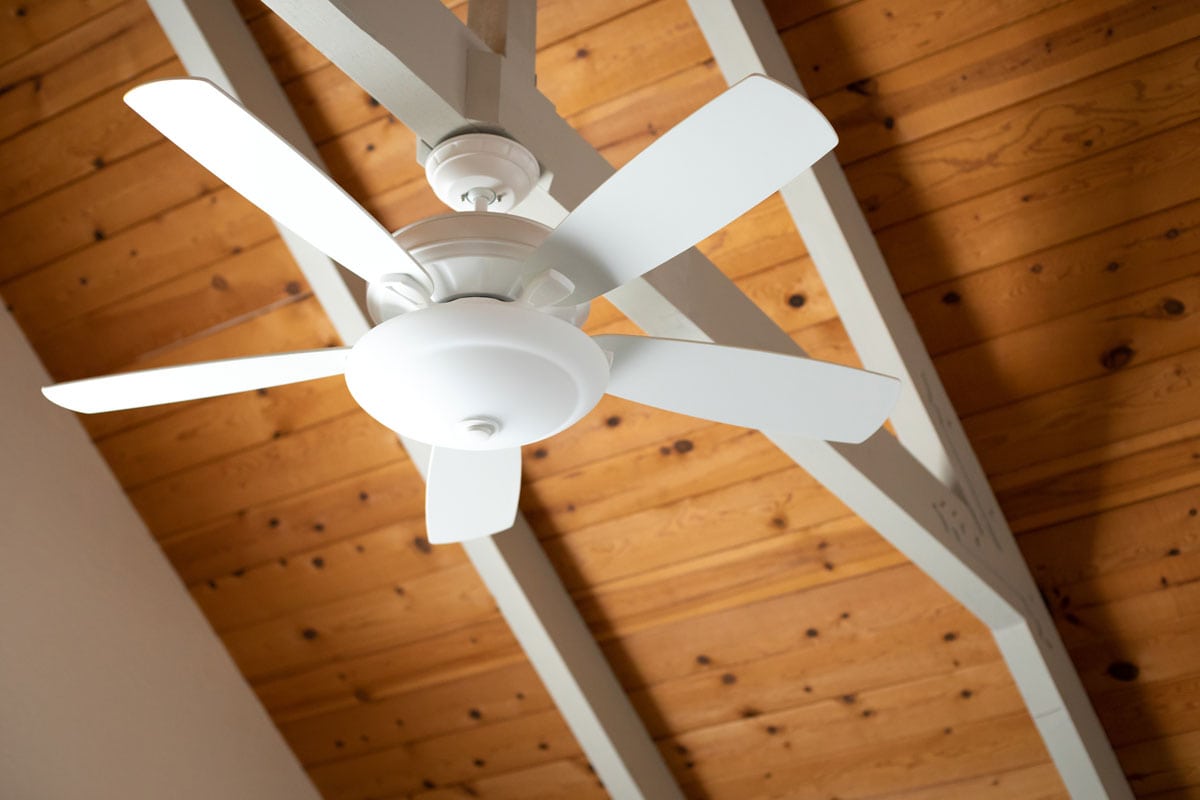 What Is A Fan Efficiency Grade?

Many ceiling fans have a fan efficiency grade rating (FEG), which is a coefficient that measures the fixture’s ability to convert its mechanical energy to air power. Take note that FEG ratings might not be in some ceiling fan models, particularly for units not manufactured in massive quantities.

Ceiling fan manufacturers often place a certified FEG seal on the product’s packaging or on the unit itself. Keep in mind that FEG seals often come in three different designs, which may also include the highlighted characteristic of the model.

For example, a ceiling fan may have a FEG seal that says 'air performance' to call customers' attention to that trait. Other units may only have the 'fan efficiency grade certified' seal, which should be sufficient to tell interested buyers that the model passes different efficiency standards.

Check out this product on Amazon.

Is It Good To Run Ceiling Fan In Winter? 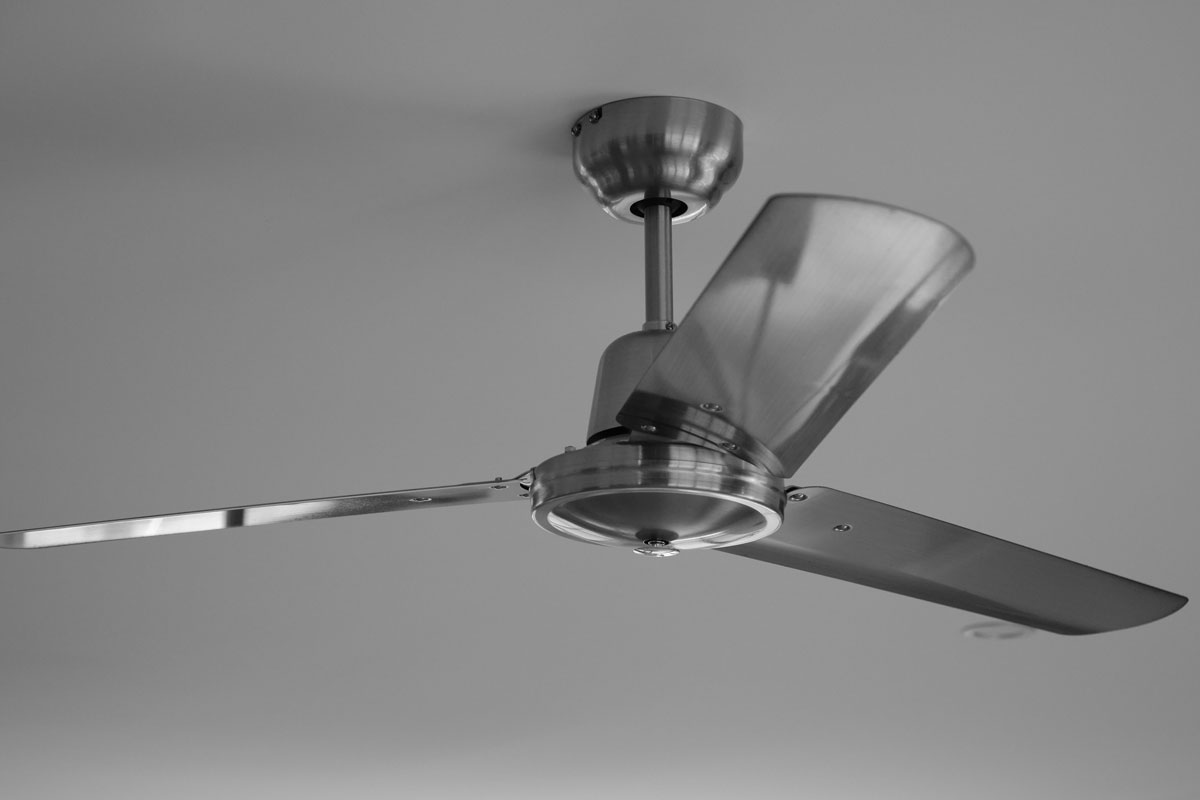 It’s okay to run a ceiling fan in the winter, provided that the blades rotate clockwise. Doing so will make the fan suck up cold air from the room and into the ceiling. This direction also helps warm air circulate within the space.

Reversing the direction of the ceiling fan’s operation can also promote other benefits like:

Check out this reversible ceiling fan on Amazon.

What Should I Look For When Buying A Ceiling Fan? 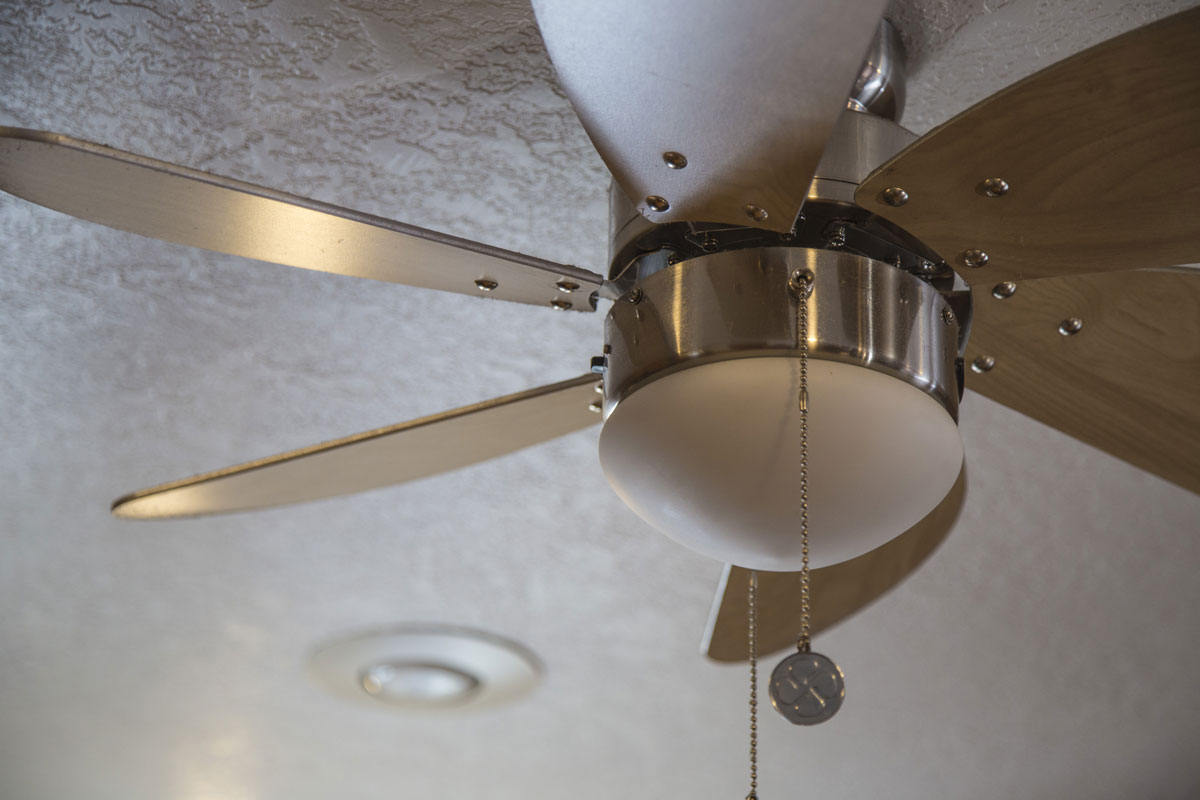 Shoppers should be looking into certain factors before buying ceiling fans. Some of the elements to think about are:

The different ceiling fan models on the market can typically fall under certain main categories, which are:

Aside from these types of ceiling fans, buyers may also see larger-than-average models built for commercial establishments. These units typically possess oversized dimensions to aid in bringing comfortable air to wider spaces than most homes.

Check out this industrial ceiling fan on Amazon.

The ceiling fan’s motor is responsible for converting electricity into mechanical energy. This module has a capacitor that torques the rest of the system, producing the necessary force to turn the blades.

So keep in mind that some ceiling fans use better motors than others. Certain models may use durable materials to help prolong these models’ longevity. Buying and installing these units may provide better value for property owners than purchasing low-quality choices.

Generally, it takes up to two hours to install a typical ceiling fan. DIY beginners may take longer, for they might frequently check the instruction manuals to frequently verify the parts and their connections.

However, some ceiling fans may take more effort and time to install than average because of extra built-in features. For example, setting up a smart ceiling fan may require users to take extra steps to attach an additional module for the remote features.

Check out this smart ceiling fan on Amazon.

Another example is Westinghouse, which offers a limited lifetime warranty to customers that purchase their ceiling fans. This policy covers the repair and replacement of ceiling fan parts if found defective caused by faulty materials or other natural causes.

What Size Ceiling Fans Do I Need? 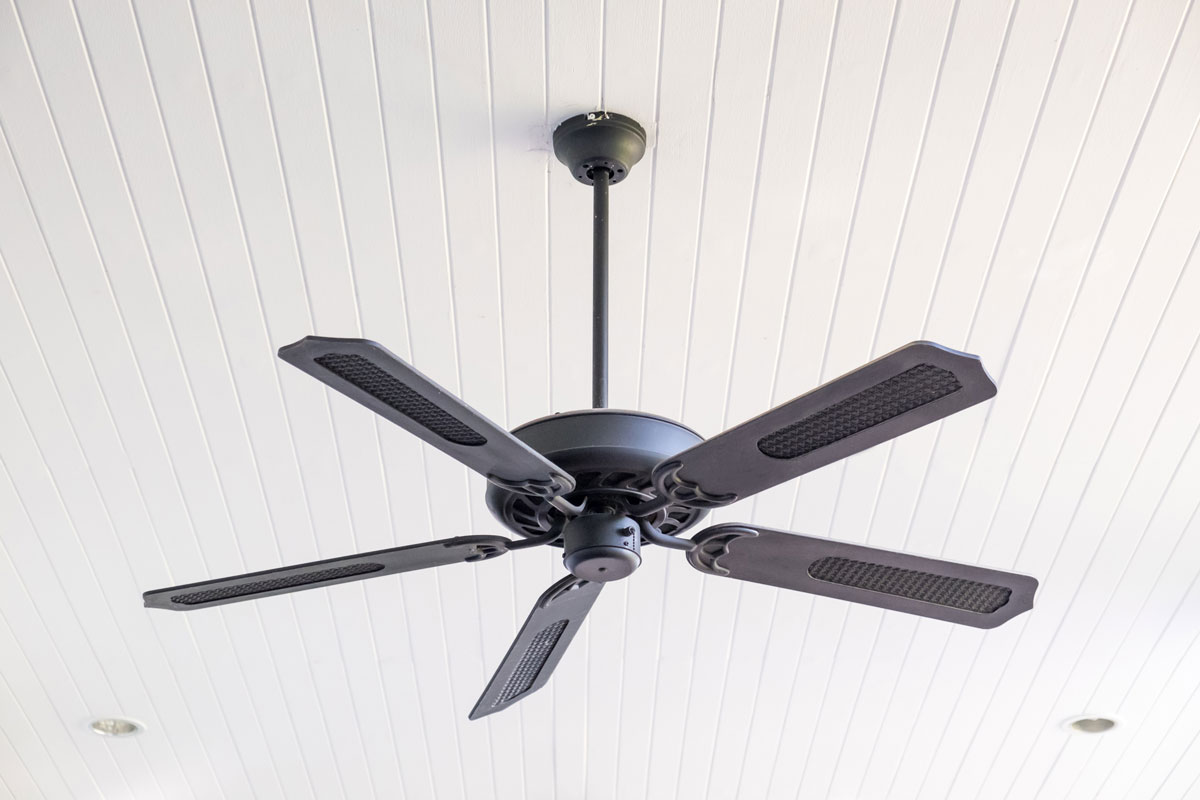 Aside from the other factors buyers need to think about in choosing their ceiling fans, they should also consider the size of these fixtures. Interested customers need to think of the fan’s blade sweep in this regard.

Here’s a short list of ceiling fan blade sweeps and the ideal room dimensions for these fixtures:

Rooms that are larger than 400 square feet may need more than one standard ceiling fan. Using a commercial model to bring comfortable airflow to large rooms is another option.

Also, you might be curious to know if you can replace your ceiling fan blades. If so, read our post on that subject matter to know the answer to that concern.

How To Install Ceiling Fans?

Ceiling fan installation procedures are usually DIY-friendly jobs. But it can still be quite easy to make costly mistakes. Follow these steps to reduce the risks of these expensive accidents:

You can also watch the video below for a visual representation of the steps mentioned above:

Bladeless ceiling fans may offer unique benefits that might not be present in standard models. Some of these distinct advantages may include (but aren’t limited to):

However, bladeless ceiling fans may not always be the best option for every buying situation. One thing that might hinder a potential customer from proceeding with their purchase of a bladeless unit is the price.

Check out this bladeless ceiling fan on Amazon. 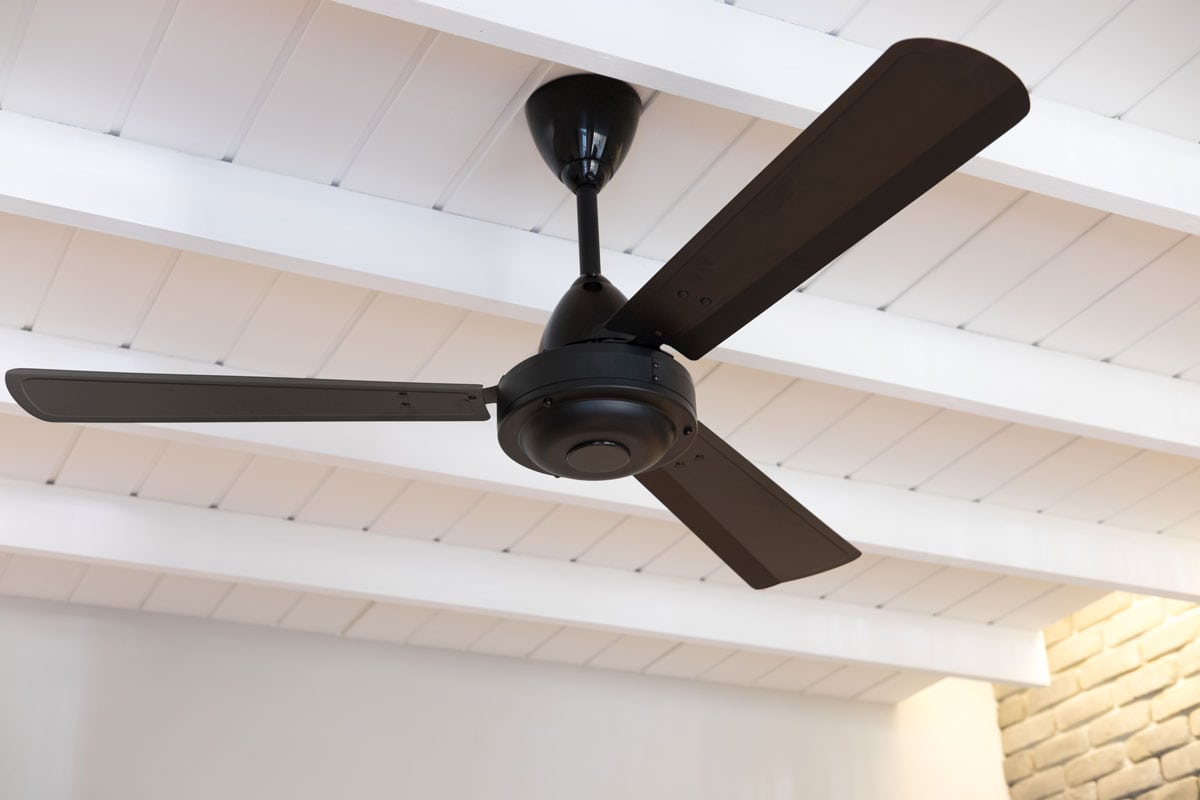 Running a ceiling fan should only cost about $0.003 per hour. In comparison, operating an air conditioner is approximately 24x more expensive than using a ceiling fan. So it would be practical for homeowners to use ceiling fans over ACs, particularly if they’re following strict budgets.

Does A Propane Furnace Use Electricity?

How To Drain Water From An Evaporative Cooler

How Many BTU For Garage Heater?

Lennox Air Conditioner Tonnage: How To Find Yours Out

Can You Paint Foil Insulation [And How To]