Are you planning to improve the insulation of your house and were wondering how to insulate the floor-to-ceiling windows? You’ve come to the right place, for we have researched this and found some interesting options for the answer.

There are several effective things that you can do to insulate the floor-to-ceiling windows. Here are some of the most cost-effective ones:

The list above includes practical ways to insulate your floor-to-ceiling windows—or window walls—whether you live in an apartment or in your own house. We explain how to install these six methods in the succeeding sections. Additionally, we have a couple more insulation methods that are window modifications for your home. Read on! 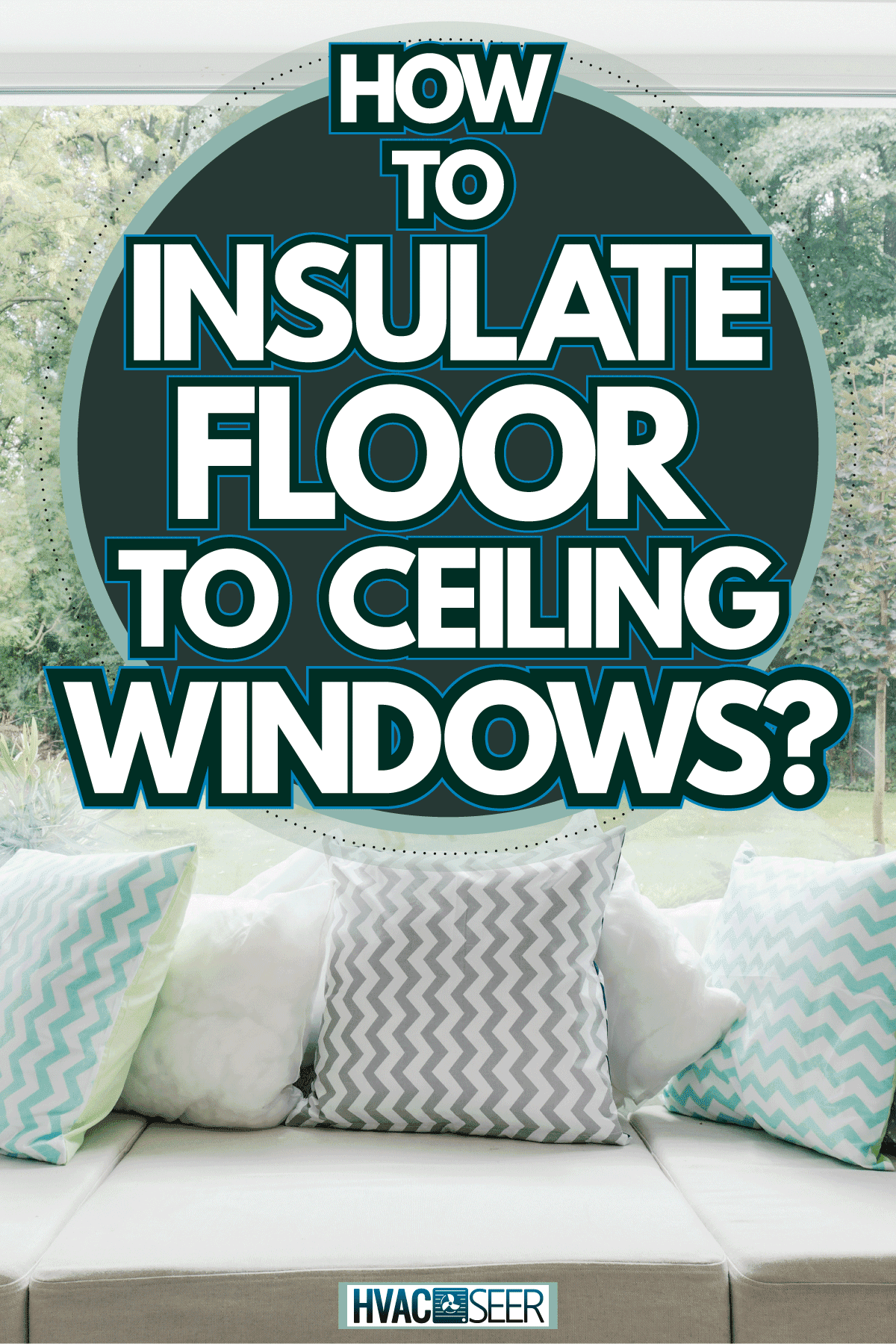 How to insulate the floor to ceiling windows?

A single window can lose almost ten times the heat as a well-insulated wall of the same surface area. With window walls, the heat transfer is even greater than a normal window.

This much heat passing through the windows can force your HVAC system to work overtime. This equates to more energy consumed to heat and cool which leads to higher energy bills. 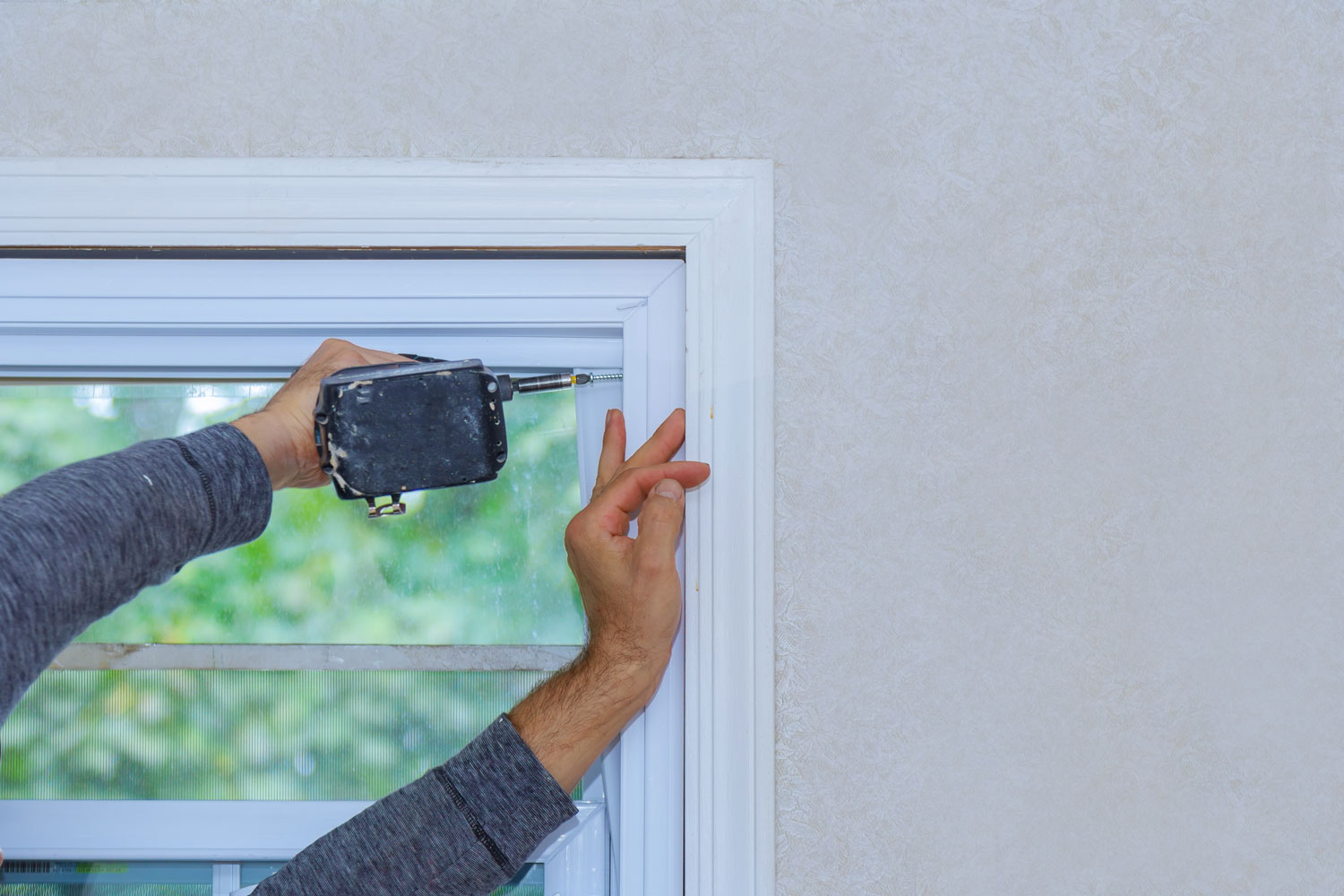 Thus, it is important to insulate windows to minimize the energy wasted from heat transfer. Here are some effective and easy to accomplish ways to insulate your window walls right now.

How to seal window cracks with silicone caulk

Use the candle test to look for leaks around the window frame. Close the window and move the candle slowly along the frame. You will have to use a ladder to reach the top areas of the window.

Watch the flame closely for movement. The flame will move away from the window where there is draft. A draft means there is a leak on your window wall.

Use transparent silicone caulk to seal the leaks on your window. Check the area again with the candle to verify that you’ve sealed all air leaks.

The Gorilla silicone sealant caulk is available on Amazon. Check it through this link.

How to install a window insulation film 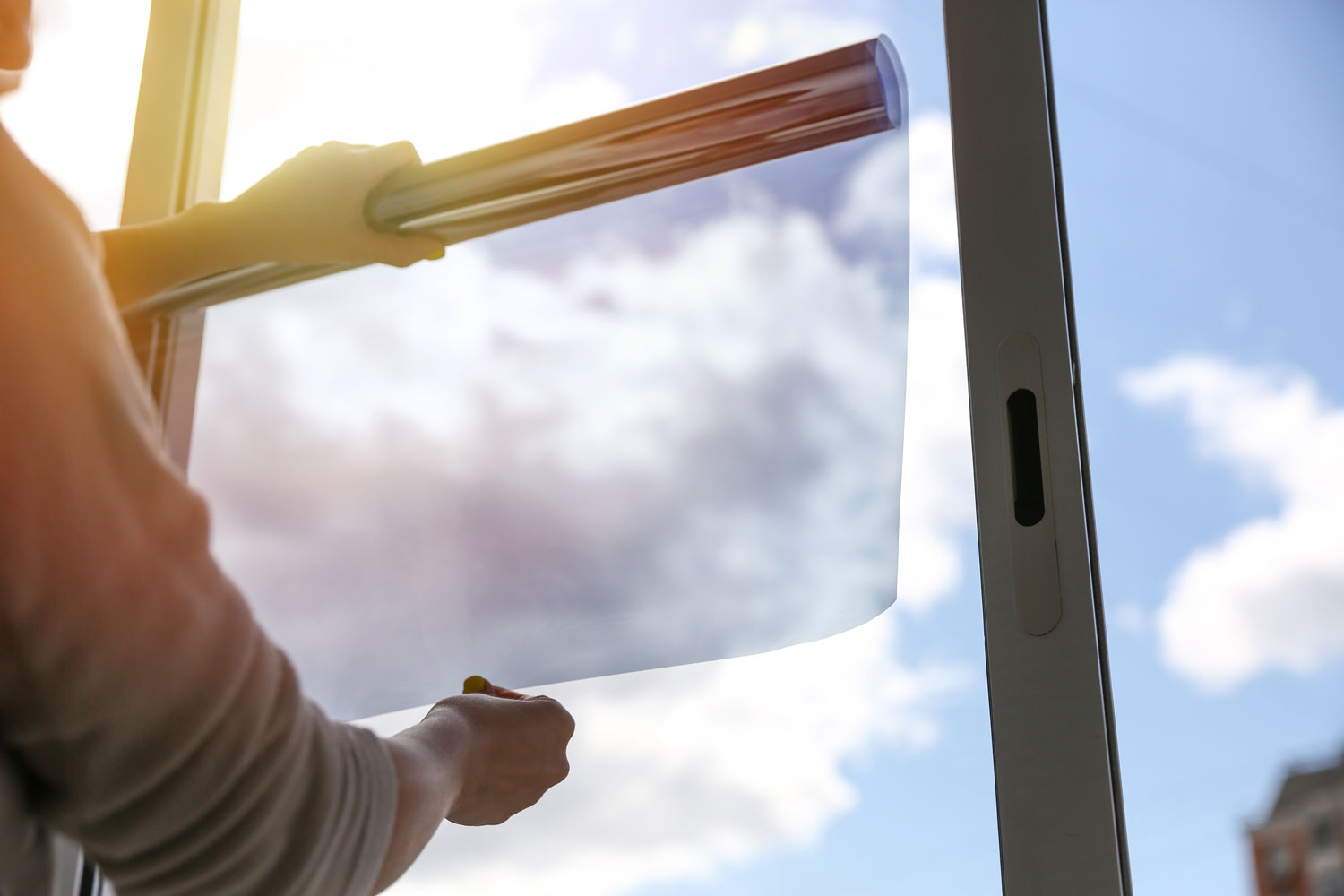 A window insulation film is made of a thin plastic that can be installed on windows. It effectively minimizes heat transfer through the window.

There are two main types of window insulation film that you can use:

This type of film is installed on the window frame instead of on the window itself. This traps a pocket of air between the glass of the window and the film. This system creates a double-glazed system that makes use of the trapped air as an insulating medium.

The thermal conductivity of the trapped air is much lower than that of glass. Thus, it creates a layer that reduces the heat transfer on your window. The bigger the width of the trapped air, the more insulation it provides.

If the pocket of air created is too thin, the insulation it provides might not be enough to significantly reduce the heat transfer through the window.

The film is attached to the window frame using pressure-sensitive mounting tape. The film can then be heated with a hairdryer to shrink the film and get rid of wrinkles to improve the optical clarity of the layer.

A solar control film works as a specialized reflective barrier that is transparent. It absorbs the UV component of sunlight and reflects the infrared component.

The Duck Brand indoor shrink film insulator kit is available on Amazon. Check it through this link.

How to cover windows with a layer of bubble wrap

A layer of bubble wrap as insulation uses the same principle of using trapped air as an insulator to reduce the heat transfer through the window.

Clean the inside of your window, then spray a mist of water on the window. Attach the bubble side to the moist window to attach it.

The smooth side of the bubble wrap should face your living area. The gap created between the window and the bubble side also creates a thin layer of air insulation.

How to make a DIY magnetic vinyl window insulation

Magnetic insulation is a good way to have insulation that you can remove when not needed that will not ruin the finish as tape could. Follow the simple steps below to DIY a vinyl window insulation:

The magnetic tape will hold the vinyl layer to the window, and it will not create a mess to remove. Additionally, there will be a pocket of air between the window and the vinyl that can add to the insulation by limiting the heat transfer through the window's glass.

If you don’t need the insulation anymore, simply remove the vinyl sheet and store it for future use.

How to install thermal curtains over your windows

Thermal curtains or thermal drapes are special curtains that act as a layer of defense against drafts on your window. The Family Handyman describes them as being made from several layers of material that effectively inhibit the volume of heat transfer through the windows and even on glass-paned doors.

Thermal curtains serve as an insulating buffer that creates a layer that insulates the rest of your home.

Do thermal curtains keep cold out?

Thermal curtains include a thick backing of insulating material in their layers. They also include a polyester film vapor barrier. The side that faces the window is coated with acrylic foam or a layer of aluminum to protect against ultraviolet damage.

The thermal layers trap the heat and block the cold by creating a barrier that prevents the transfer of heat between the glass on your window and your home.

The BGment thermal insulated blackout curtains for the bedroom or living room are available on Amazon. Check it through this link.

This has a hollow rubber tube that adjusts well to the space as the window compresses it. The compressed rubber blocks cold air from passing through the window. Some versions are filled with foam. These versions can keep their shape longer.

Attach the tubular rubber to the window frame using the sticky sash on one side. Align the tubular end to where the window comes into contact with the frame.

What window modifications can help insulate the floor-to-ceiling windows? 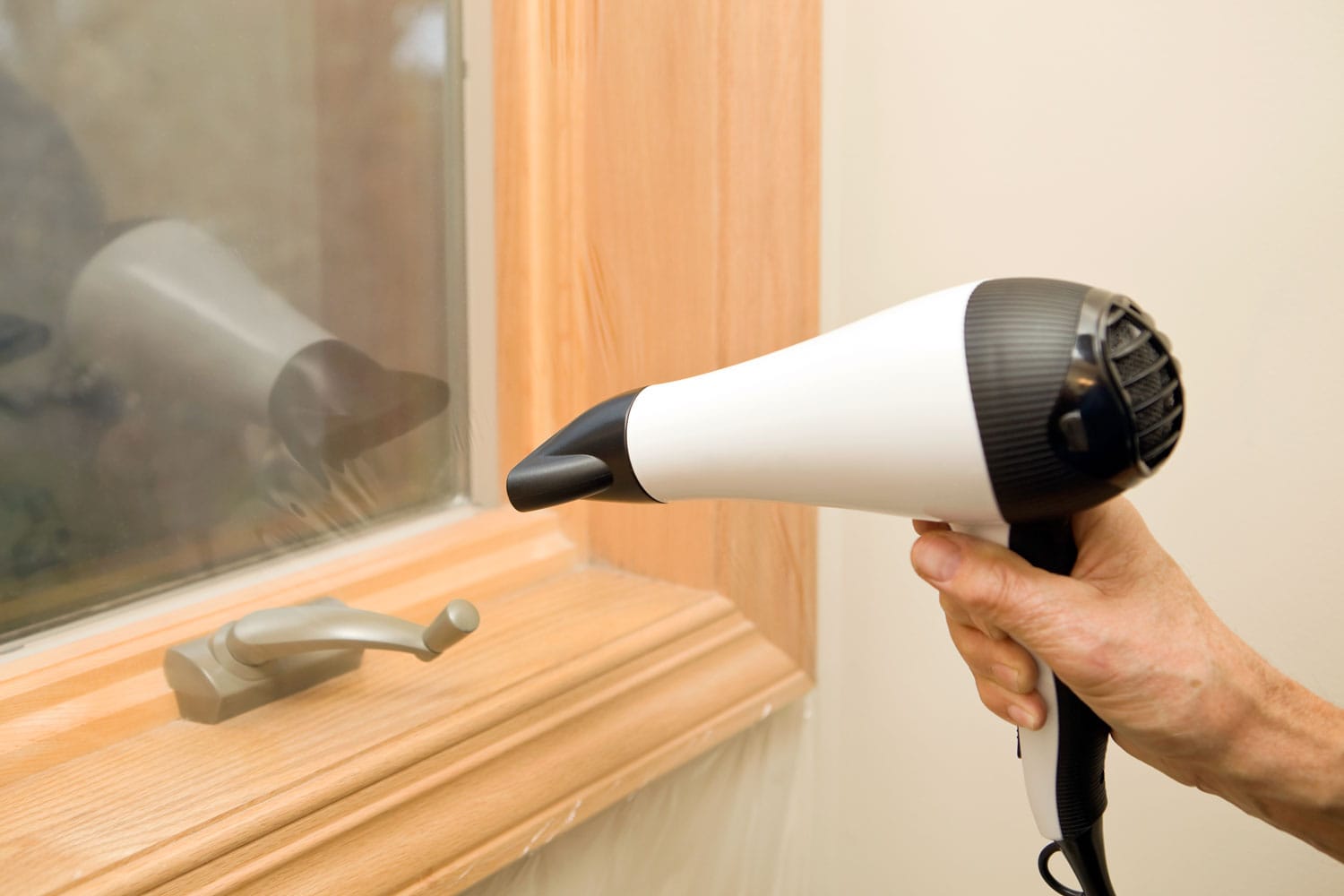 Most new constructions in the US already have modified window fixtures that apply the technology that we will talk about below.

What is a double-paned window?

A double-paned window or a double-glazed window was introduced commercially in the 1950s. It soon became a standard for new construction and replacement windows.

Remember one of our insulation methods from the list above where a special film creates an air pocket? A double-paned window improves the principle of trapping air to reduce heat transfer on a window by filling the gap between the two window panes with an insulating gas like argon, xenon, or krypton.

Argon, xenon, and krypton improve a window’s resistance to heat transfer. They are all inert gases that are denser than air.

Double-paned windows prevent outside heat from getting into your home in summer and indoor heat from leaking out of your house in winter.

What is a triple-paned window? 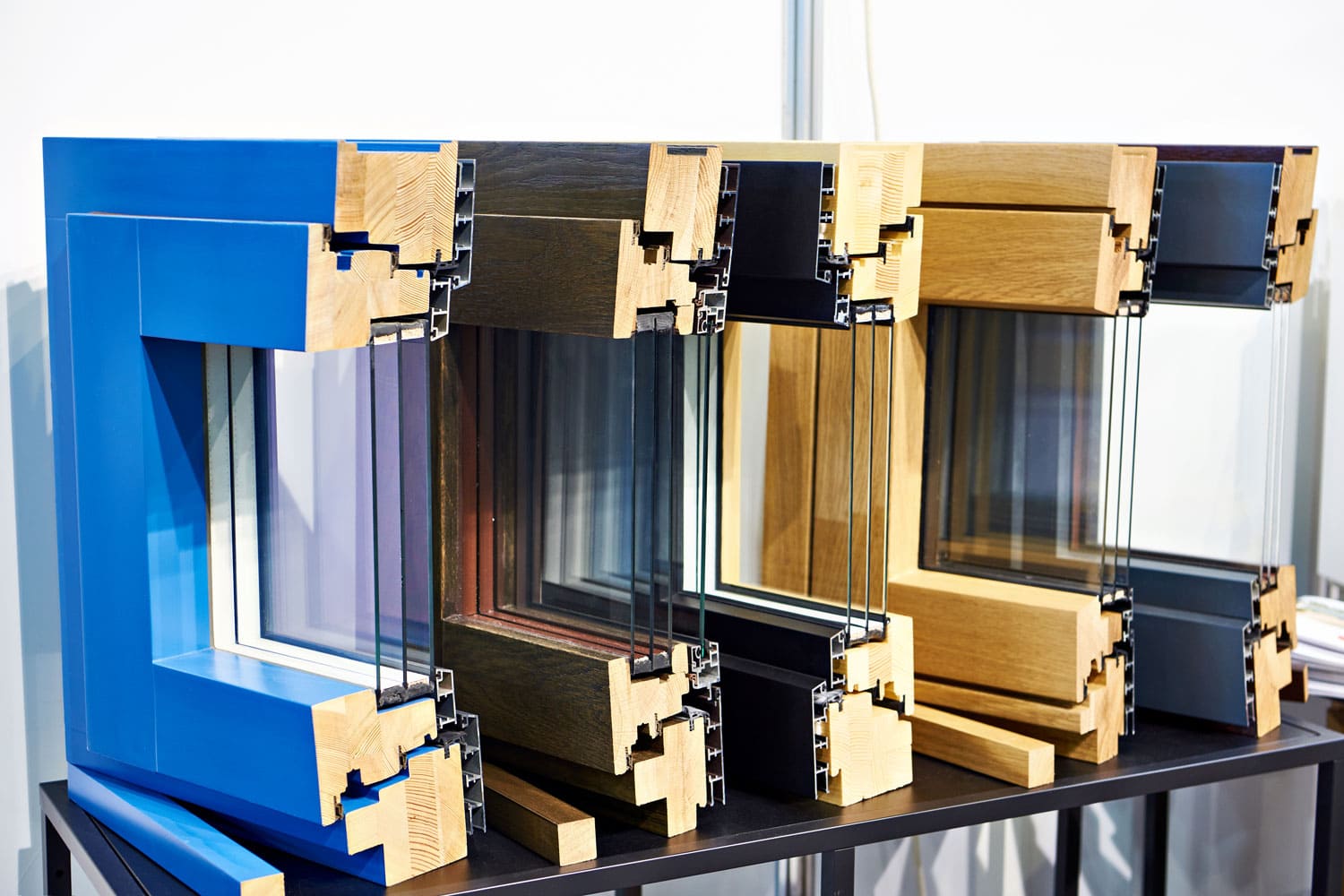 A new type of triple-paned window has been developed and deployed in the market—the thin triple-paned windows. It is currently the most energy-efficient, commercially available window on the market according to EERE (Energy Efficiency and Renewable Energy, the US Department of Energy’s division for energy efficiency). 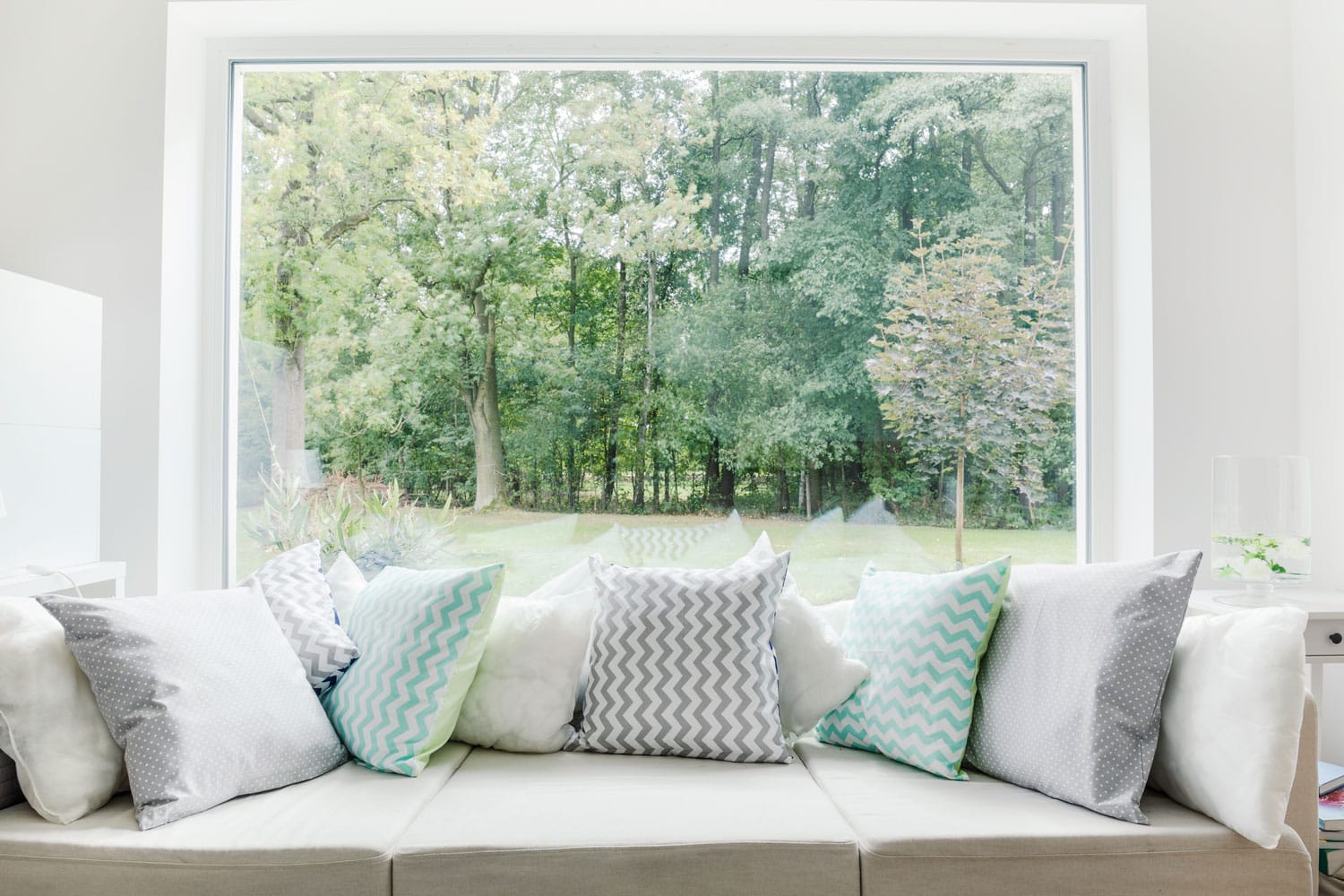 Insulating a floor-to-ceiling window can be a challenging task. However, with the help of new technology and effective insulation, this can be achieved.

If you enjoyed this article, why not check the two other articles below:

Should You Remove The Drain Plug From A Window Air Conditioner?

How To Insulate Mobile Home Walls And Windows?

Should A Fan Heater Spark? [Here’s What You Need To Know!]

Where Is A Dometic RV Air Conditioner Thermistor Located?

Humidifier Leaving White Dust – What To Do?

When To Use Fan Mode In Your AC

How To Install Foam Board Insulation On Concrete

Furnace Humidifier Water Always Running – What To Do?