Having a ceiling fan in your home is a great way to keep the entire room cool without the costs of running an air conditioner all day. Although it might seem like a formidable task when you’re just starting, it’s easy to replace an old lighting fixture with a new ceiling fan if you know the right way to do it. However, what if the ceiling is sloped? Are you out of luck? Not necessarily; installing your new ceiling fan on a sloped ceiling can be done more easily than you think!

Here are the steps to installing a ceiling fan on a sloped ceiling:

Whoa, that’s a lot of steps! Don’t worry because, in this article, we will discuss each of these steps in detail. Plus, we will talk about what tools you will need and answer other common questions on installing a ceiling fan. 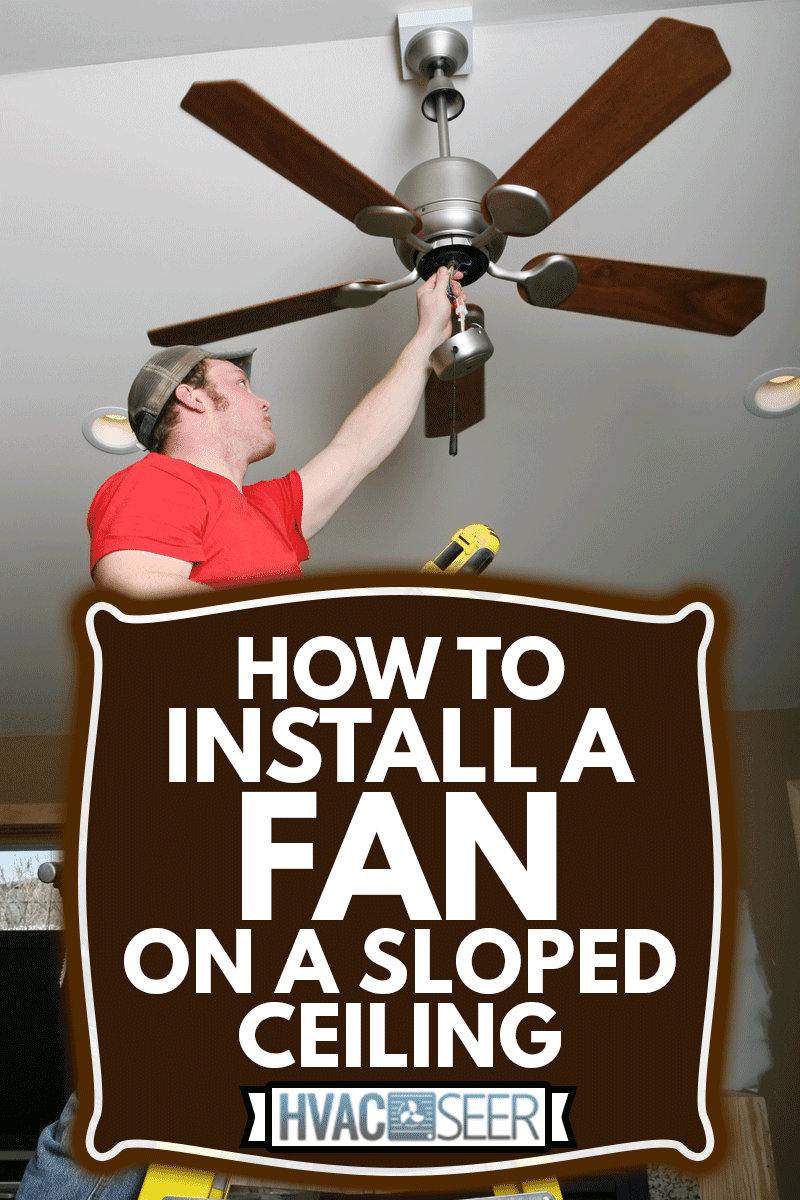 How to install a ceiling fan on a sloped ceiling

Turn the electricity off in the circuit breaker box

When working with electricity or wiring, you should always cut power to the area before touching anything else. Locate the circuit breaker box in your home and turn off the power to the room or area your ceiling fan will be installed in.

Remove any screws holding the old fixture in place

Use a ladder or step-ladder to safely climb up towards the roof to give you access to the fixtures. Hold the fixture in place with one hand as you remove any screws securing it to the roof. Once they have been taken out, the old fixture should detach from the ceiling on a clopped ceiling fan.

Disconnect the wires from the old electrical fixture

The ceiling box is a circular metal fitting that other fixtures attach to. Look for any screws or nails holding the old ceiling box in place and remove them. Push the circuit box further into the clopped ceiling, or attempt to pry it out to remove it. 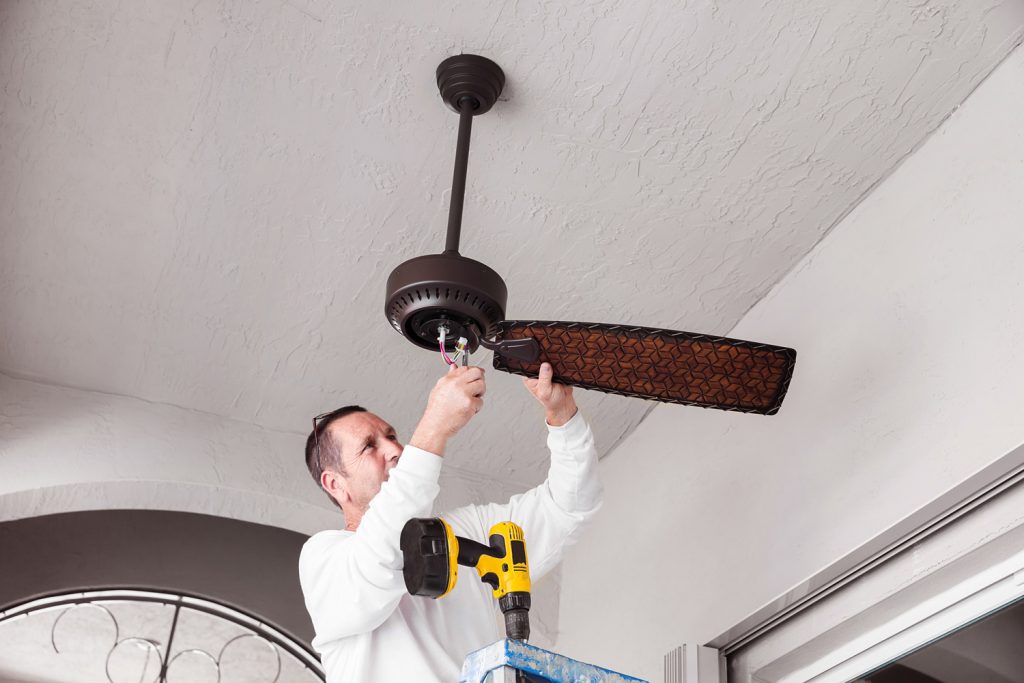 A hanger bar is an extendable rod that will hold taut between two ceiling joists and give you something to attach the fan to. Use a small flashlight to look into the hole in your ceiling where your new ceiling box will be installed.

If you don’t see a long piece of wood directly above the hole, your ceiling box is likely being installed between two joists. Locate the studs in your ceiling to be sure.

Attach the ceiling plate or bracket

This will contain all the parts you need to assemble and mount a new ceiling fan. Fan kits should be available from your local hardware store, as well as online. Buy a fan that fits the size of the room where it will be installed.

Attach the downrod to the fan body

The downrod is the long metal pipe that is used to distance the fan from the ceiling. Keeping the fan's body on the ground, thread the wires attached to the fan through the downrod. Sit the downrod in place on the top of the fan body. Tighten the locking screws around the base of the downrod until they fastened it to the fan body.

Lift the fan up to the ceiling 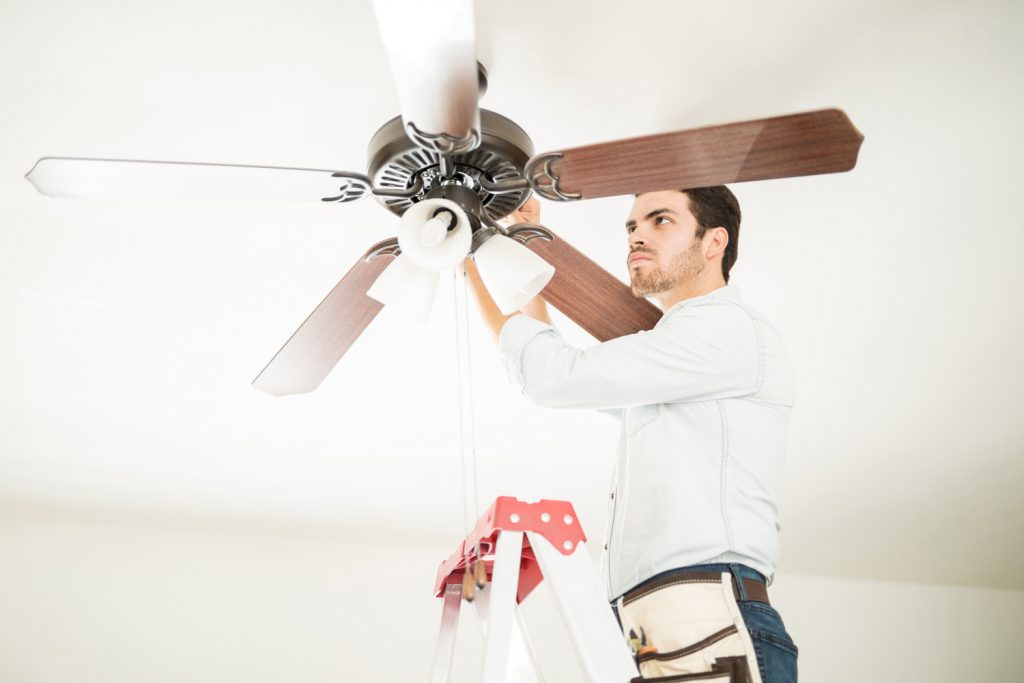 Use a ladder or stepladder to lift the fan assembly towards the sloped ceiling carefully. Most fans will have some method to suspend them just below the ceiling while you connect the wiring.

The neutral wire provides a return path for the current coming into the fan and usually has a white insulate covering. Hold the two neutral wires together and twist the stripped ends together. Use a plastic wire connector to hold them together and secure them with electrical tape.

The ground wire will usually be green or entirely bare and is used to prevent electrical shocks. Find the two ground wires, twist them together and secure them with a plastic wire connector. Use electrical tape to keep the wires and the connector in place.

Any remaining wires will be hot wires used to provide power to the fan and any light fittings attached to it. These will usually be black but maybe a different color in different wiring schemes. Twist the remaining wires together and secure them with a plastic wire connector and electrical tape.

Tuck the wires into the fan box

Carefully push the wires coming from the ceiling back into the fan box to secure them. As you do, make sure the wire connectors and electrical tape stay secure, and no wiring is exposed.

Screw the canopy over the fan box

The canopy will lift from the downrod and cover the wiring and socket used to hold the fan in place. Use the provided screws to secure the canopy to the fan box and keep the fan together.

One by one, lift the fan blades to their mountings on the fan motor. Slot them into place according to the manufacturer’s guide, and use the provided screws to secure them to the motor tightly.

Turn the power back on and test your fan

Go back to the circuit breaker box or boxes and restore power to the sections of your home. Turn the fan on the wall and watch it for a few minutes to make sure it works as intended.

Will A Flush Mount Ceiling Fan Work On A Slanted Ceiling?

How Do You Measure A Ceiling Fan Downrod For A Sloped Ceiling? 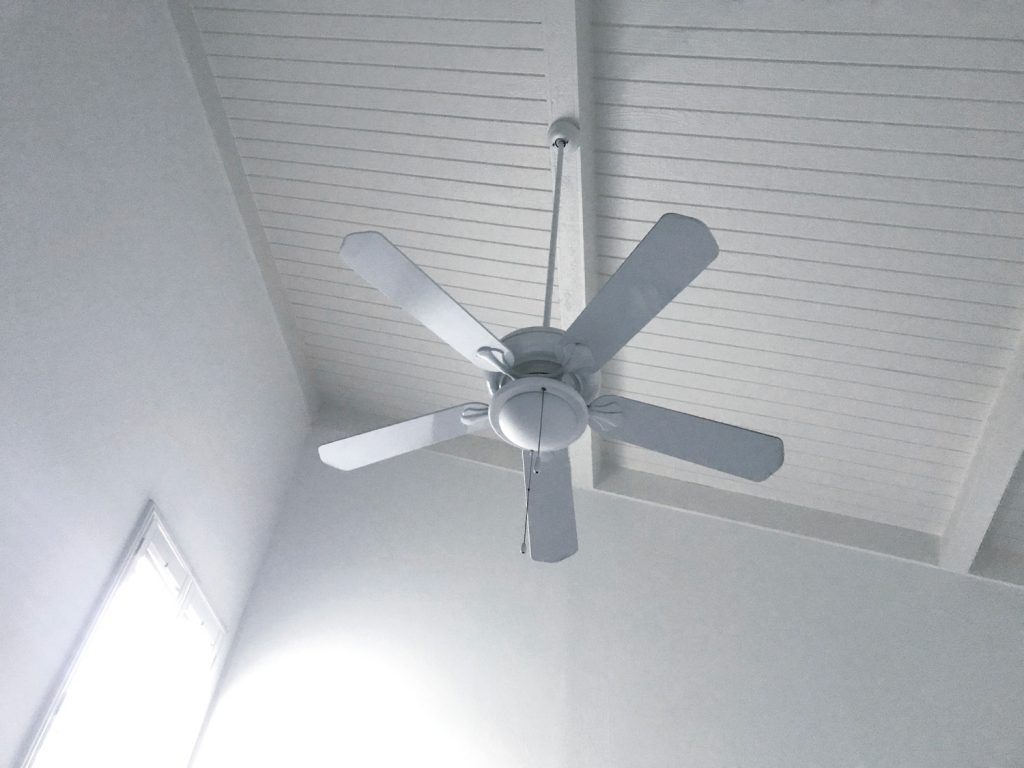 The most common method used to find the right downrod length is to take the ceiling height, subtract the height of the ceiling fan (most fans are between 12 and 18 inches in height depending on the fan), and then subtract the desired hanging height (usually eight feet).

For example, if your ceiling is 12 feet high and your ceiling fan is 12 inches in height, you will need a 24-inch downrod to mount the ceiling fan between eight and nine feet above the floor. You can also refer to the downrod length chart below for additional guidance in selecting the correct measurement.

How Far Should A Fan Hang From The Ceiling? 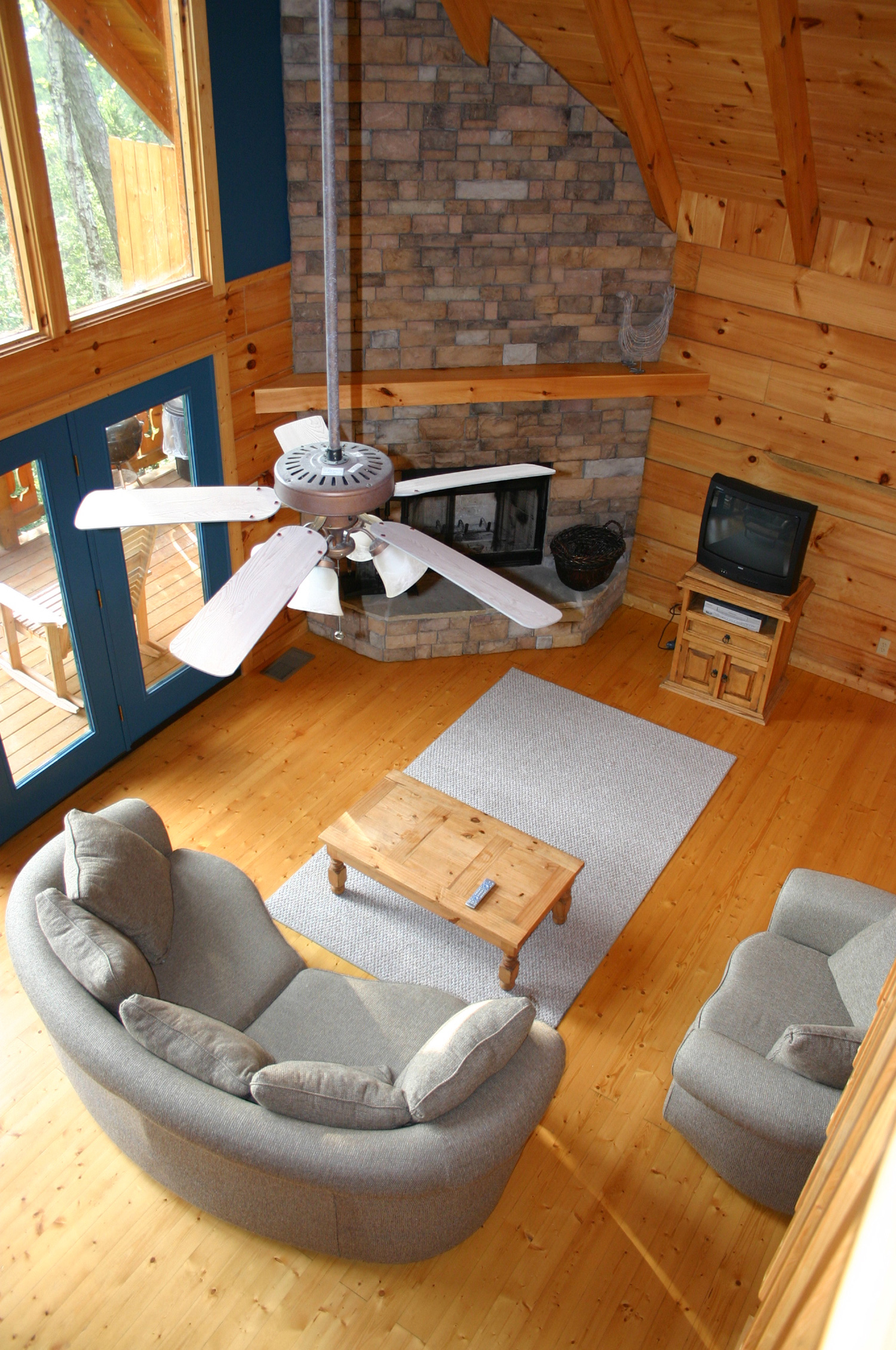 Can Ceiling Fans Be Installed At Any Angle?

For those who want to install a ceiling fan and have a slightly angled or raked ceiling, don’t worry at all! Most (but not all) ceiling fans on the market today can be installed on a ceiling angled up to 28 degrees with no problem or any extra accessories needed. 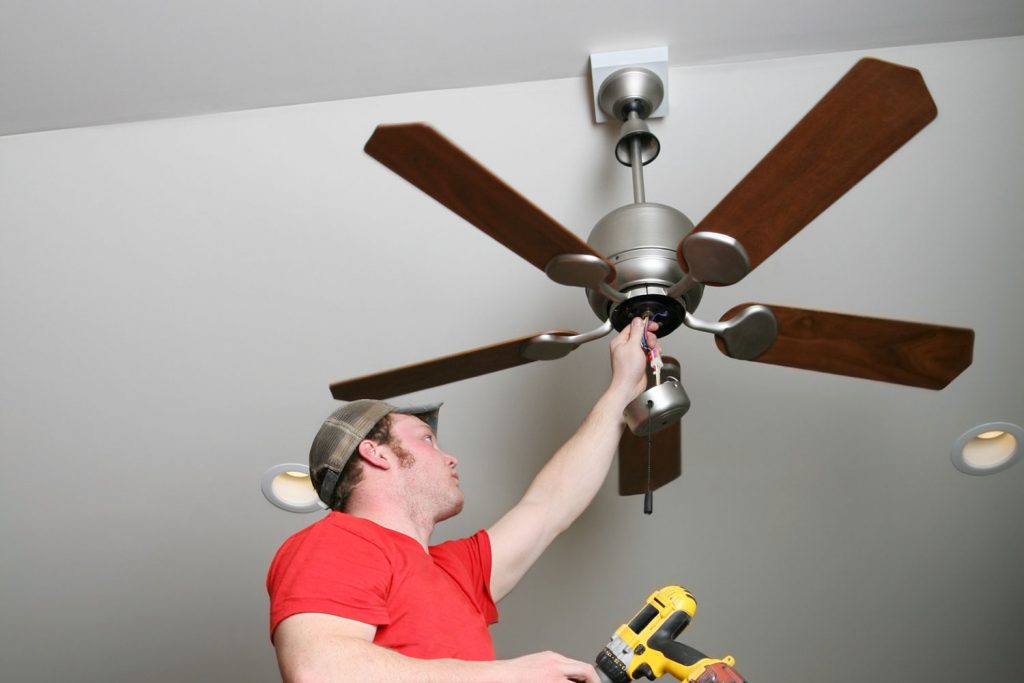 Getting a new ceiling fan in your home can be exciting, but as you can see above, it can be a process! What makes it even more difficult is when the ceiling is sloped instead of flat. Nonetheless, it can be done with a little bit of patience.

How To Install A Chimney Cap Without A Flue

Can A Radon Fan Be Inside My Home?

Portable Air Conditioner Leaking Water – What Could Be Wrong?

Can You Install Central Air Conditioning Along With Electric Heating?

Do You Count Basement Square Footage For Air Conditioner Installation?