Ceiling fans are relatively affordable ways to provide home comfort and air circulation. When deciding where to place a new fan, you are wondering if ceiling fans should be centered or not. In this post, we gather sources from around the web to provide a thorough answer to your question.

While centering a ceiling fan in a room does provide a good sense of symmetry and airflow, there are several other factors to consider. Often, when the entire situation is fully appraised, a non-centered location is best. When deciding whether or not to center your ceiling fan take these issues into account:

Keep reading the rest of this post for a discussion on each of the above fan positioning considerations. Altogether, this post functions as a guide on choosing the position of your ceiling fan or ceiling fans. To conclude, we answer several questions related to the topic of this post. 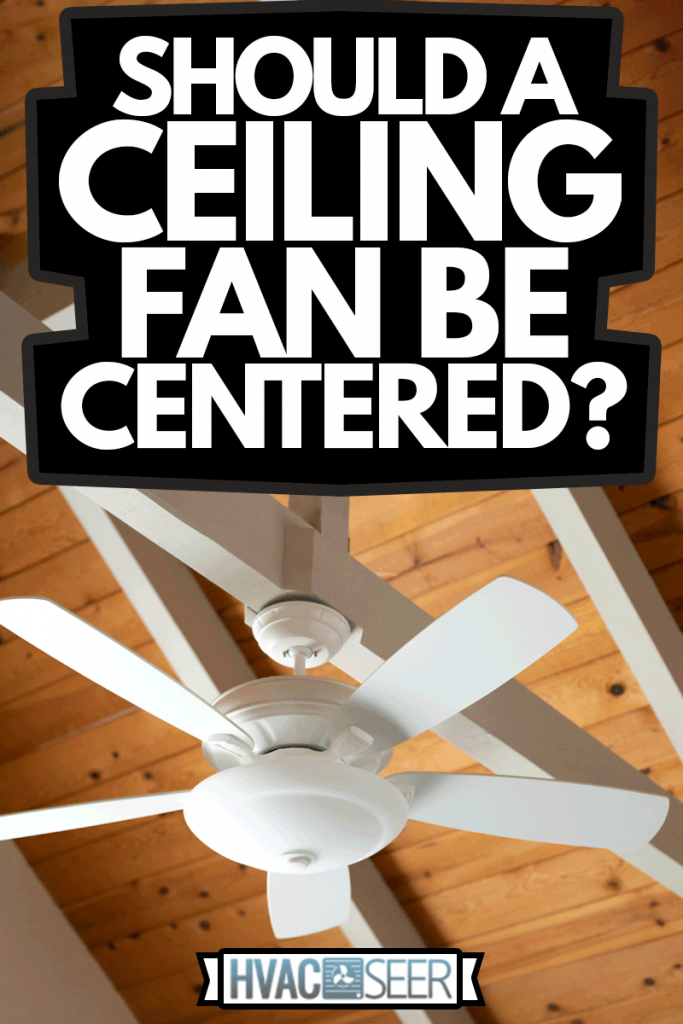 How to Choose A Ceiling Fan Location

Choosing a location for your ceiling fan is as personal as the rest of your home's layout. Therefore, the advice contained below is only designed to contain useful tips - the final choice is up to you. That means if you prefer a centered ceiling fan, by all means, make that decision. 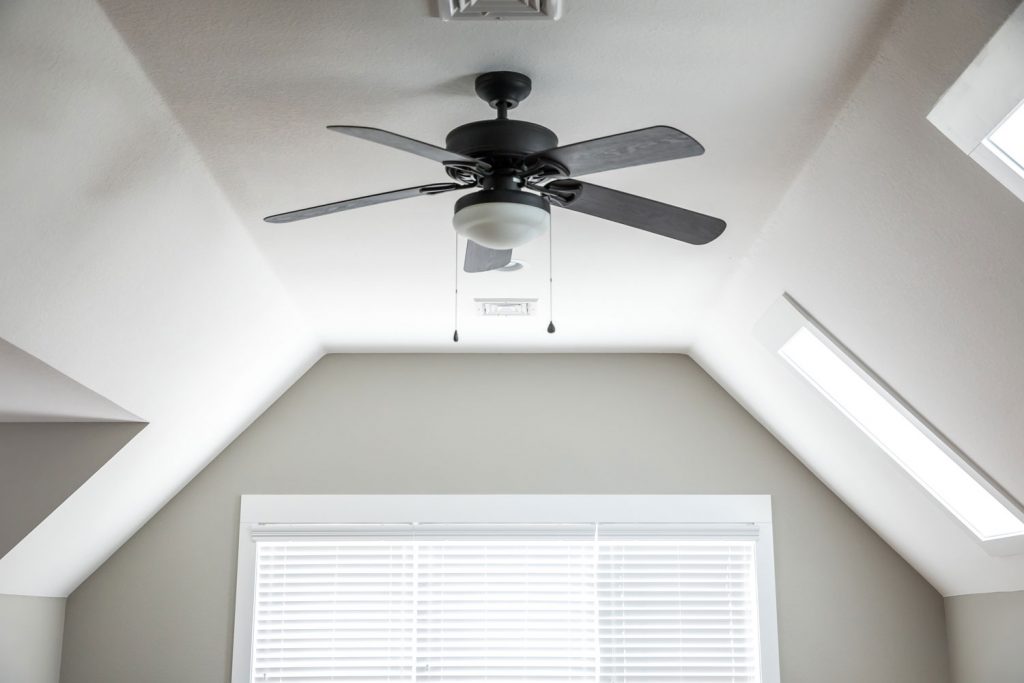 Often, fan locations are determined by architects or builders. These professionals have experience with what has earned favor in the past and know the potential fan positioning pitfalls. Thus, asking advice of anyone experienced is always a good call.

To help frame your thought process, consider the following subsections on room use, light position, and overall room layout.

Room use is critical to choosing the best fan location. To start, it is important to understand how fans work to provide comfort and cooling.

Accoding to Time, fans do not actually change the temperature of the air. Instead, the breeze speeds up the heat transfer processes of evaporation and convection. So as more air moves past us, we lose heat faster and thus become cooler. 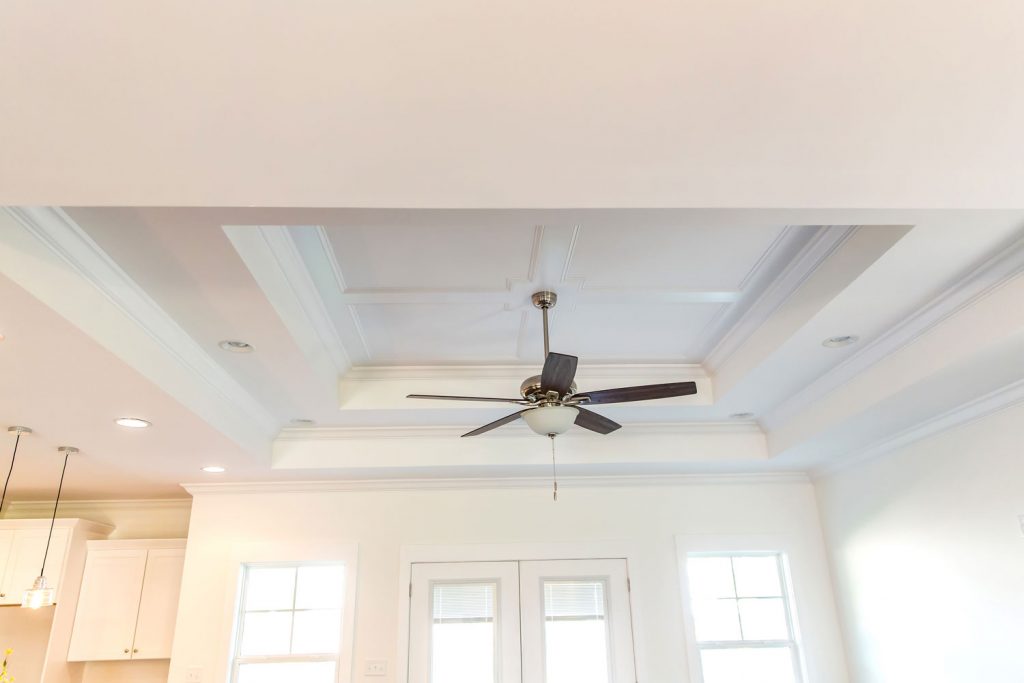 Given this, a ceiling fan is the most useful when placed above where people will congregate or spend the most time. On the other hand, if you were to center a fan in a large room, it is  possible that it would only barely blow on the locations that are actually used.

Here, we cover basic advice for where to put a ceiling fan in dining rooms, kitchens, living rooms, and bedrooms.

In the dining room, it is most common to center ceiling fans right over the dining room table. Therefore, the most cooling will be imparted to guests and residents while sitting down to eat. Often, this is also in the center of the room but other times the table is placed off center.

For smaller kitchens, it may be the most appropriate to center your fan in the room since the entire room is utilized during cooking and cleaning. That being said, be sure that the fan is sized appropriately for the space. 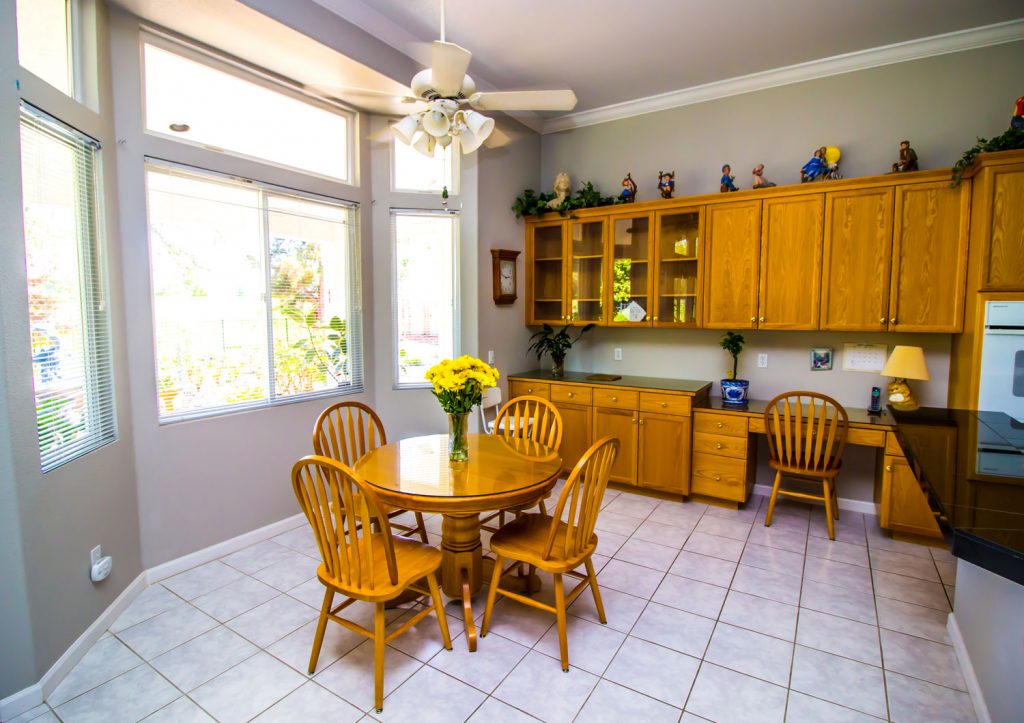 However, for larger kitchens or long rectangular kitchens, it might make the most sense to install a couple of fans spaced evenly across the room. That way, the entire space will be cooled by the easy breeze of a ceiling fan.

Modern living rooms generally have a cluster of chairs and couches on one end that all serve as seating for a TV or projector screen. With this setup, placing the fan above the group of chairs allows the most individuals to feel the cooling of the fan.

For other living room setups, it might make more sense to center the fan or install a few fans to fully service the entire space.

In the bedroom, the most important activity is sleeping! Thus, ceiling fans are usually centered over the bed. In most cases, the breeze from this bed ceiling fan will also help cool the rest of the room. For a large bedroom, a second fan over the other side of the room may be beneficial.

Light position is critical to ceiling fan placement. Architects and home designers will ensure that no person ever ends up sitting or standing in a position where there is a spinning fan between them and the light.

If you were to put a ceiling fan up as a remodel and left lights on the ceiling behind the fan, the combination would create an unpleasant strobe effect.

By this logic, you may need to put a fan off-center to avoid overlapping existing lights. Alternatively, you could always disconnect and cover lights that are in the way of the perfect fan position.

Finally, when deciding where to place your ceiling fan you will want to consider the overall room layout. Often, the center of the room will be off-centered to other major features such as doorways, fireplaces, or televisions. 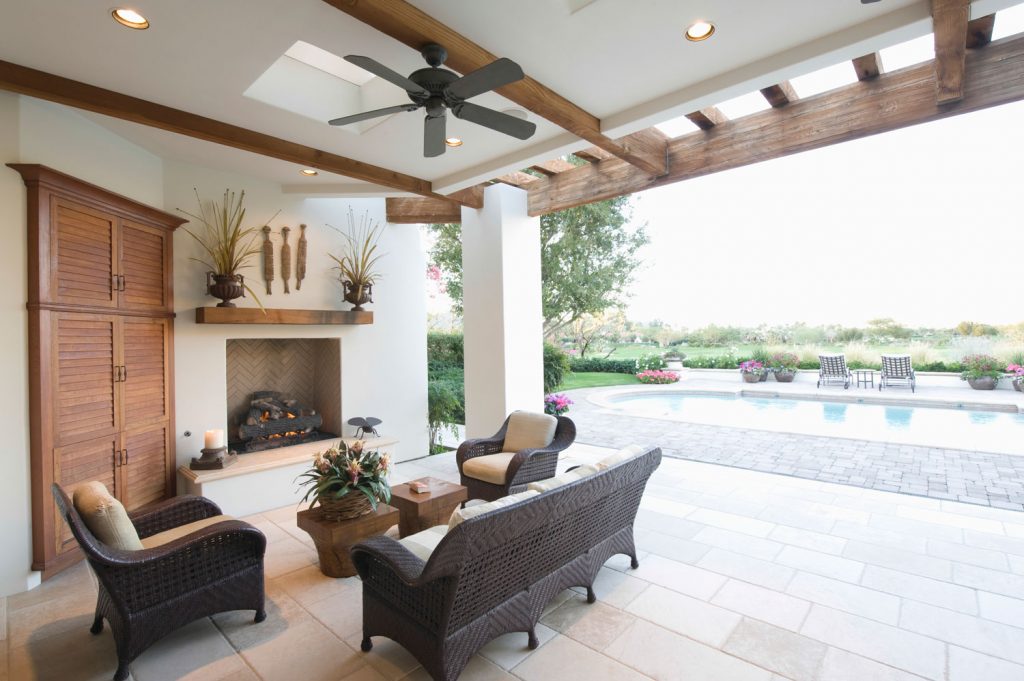 Thus, you may have to place a ceiling fan off-centered in order to actually give a feeling of continuity throughout the room. Importantly, do not simply center your ceiling fan but instead consider all of the different features and sightlines of the room in question.

How do you center a ceiling fan?

Centering a ceiling fan is more difficult than it first appears. In fact, you have to measure from at least two walls to determine the room's center. Further, these measurements are very difficult to make on the ceiling and are even harder if the ceiling is vaulted.

To establish the center of the room, it is easiest to do all of your tape measure work on the ground. This way, you do not have to wrestle with flimsy measuring tape several feet off of the floor.

It is usually best to perform this work when you can mark the floor with a pencil. But if you cannot, use string or a straight edge to record your measurements.

First, measure the distance from one wall to the other. Then make a 2-foot to 3-foot straight mark at exactly half the distance you just measured. For this mark, just eyeball where you think the room's center is. Now, do the same process the other way. Wherever these two marks cross is the center of the room.

Now, it is time to bring that point up to the ceiling. For this, you will need a plumb bob. You can use a professional one or any weight on the end of a string.

With one hand holding the sting on the ceiling, drop the weight down to the ground. Now, move the weight until it is exactly above the X-mark you put on the floor. Once the string has stopped swinging, mark that spot on the ceiling with a pencil. Congrats, you have found the center of your ceiling!

Now, you can install your ceiling fan as usual. Be sure to use a strong fan specific junction box and to have a licensed electrition perform all necessary electrical work.

How far from the ceiling should you hang a ceiling fan? 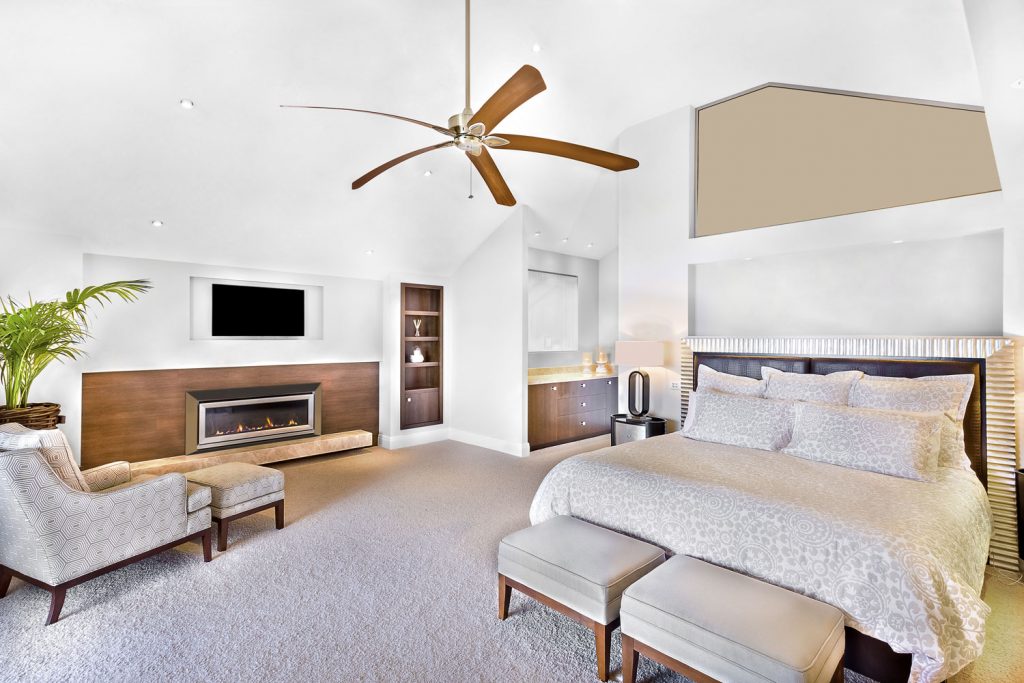 Generally, you want your ceiling fan to be between 8 feet to 9 feet from the floor. This way, you reduce the risk of a person accidentally sticking any part of their body into the spinning fan.

Further, fan down rods are usually about 10 inches long and limit where you can place the fan. However, if you are flexible with down rod length, try to get your fan 8 feet from the ground or higher.

Does it matter which way a ceiling fan blows?

Yes, it does matter. Generally, you want your fan to spin counterclockwise in order to push air downward, thus creating the breeze that helps cool off room occupants.

For the winter, you want your fan to spin clockwise to push air upward toward the ceiling. This helps to circulate the warm air that collects near the ceiling towards the walls and down into the room. Ideally, you are able to switch the fan direction based on seasonality and need.

How close can ceiling fans be to each other? 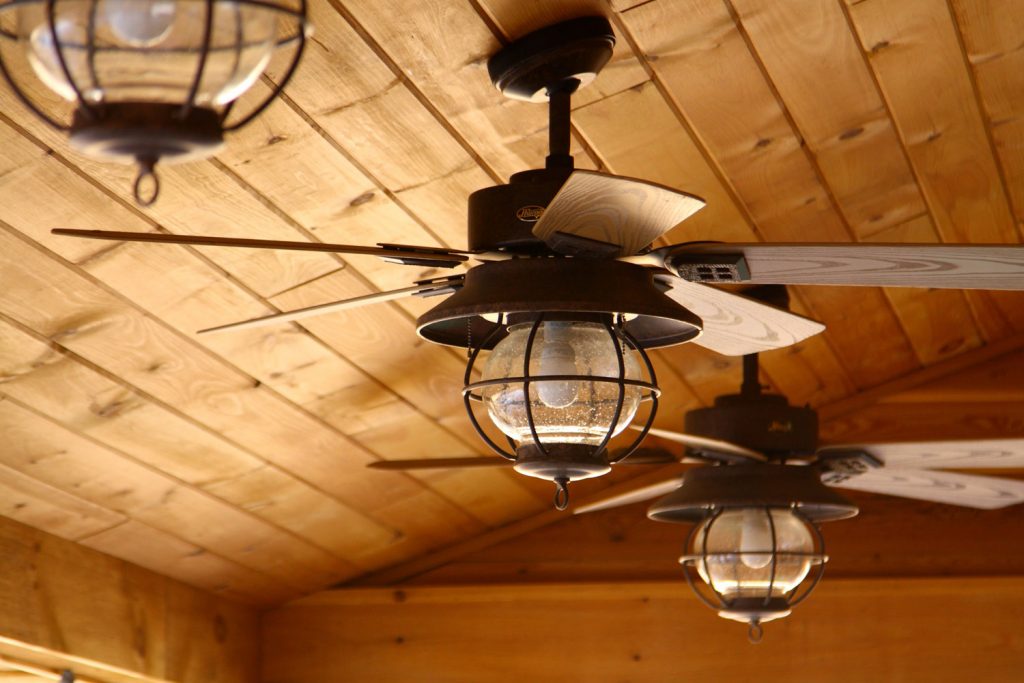 Experts recommend that you do not place two ceiling fans any closer than 36 inches apart. However, the exact distance you place fans apart depends on the size and square footage rating of the fan.

That is to say; you generally do not want to put two 100 square foot fans so close that they both are only blowing on a total of 150 square feet. Instead, place the fans far enough apart to maximize the total square footage of cooling.

To learn more about ceiling fans, read these great articles from HVAC Seer:

In this post, we answer the question of whether or not a ceiling fan should be centered. In answering, we provide a full guide on how to decide where to place your ceiling fan. To close, we answer several related questions. Good luck!

Do I Need A Special Thermostat For A Pellet Stove?

Are R Values Additive For Insulation? What You Need To Know!

When Should You Use A Kitchen Chimney?

Do Propane Furnaces Have A Pilot Light

Where Should A Pool Heat Pump Be Installed?