Most people would agree that ceiling fans offer a great way to help keep cool during the spring and summer seasons, especially for those residing in warmer climates. However, the direction in which a ceiling fan spins can have a direct impact on how it changes the temperature in a room, as it can raise or lower it. In this guide, we'll cover why it's important as well as cover other aspects of ceiling fan operation.

A ceiling fan should be set to spin counterclockwise during the summer months of the year. This spinning direction forces air in a downward motion, thus cooling the room.

It may seem weird that this is something that even matters at all. However, if you take a close look at the blades of most fans, you'll notice that they're positioned at an angle, and it's for a reason. Let's discuss why. 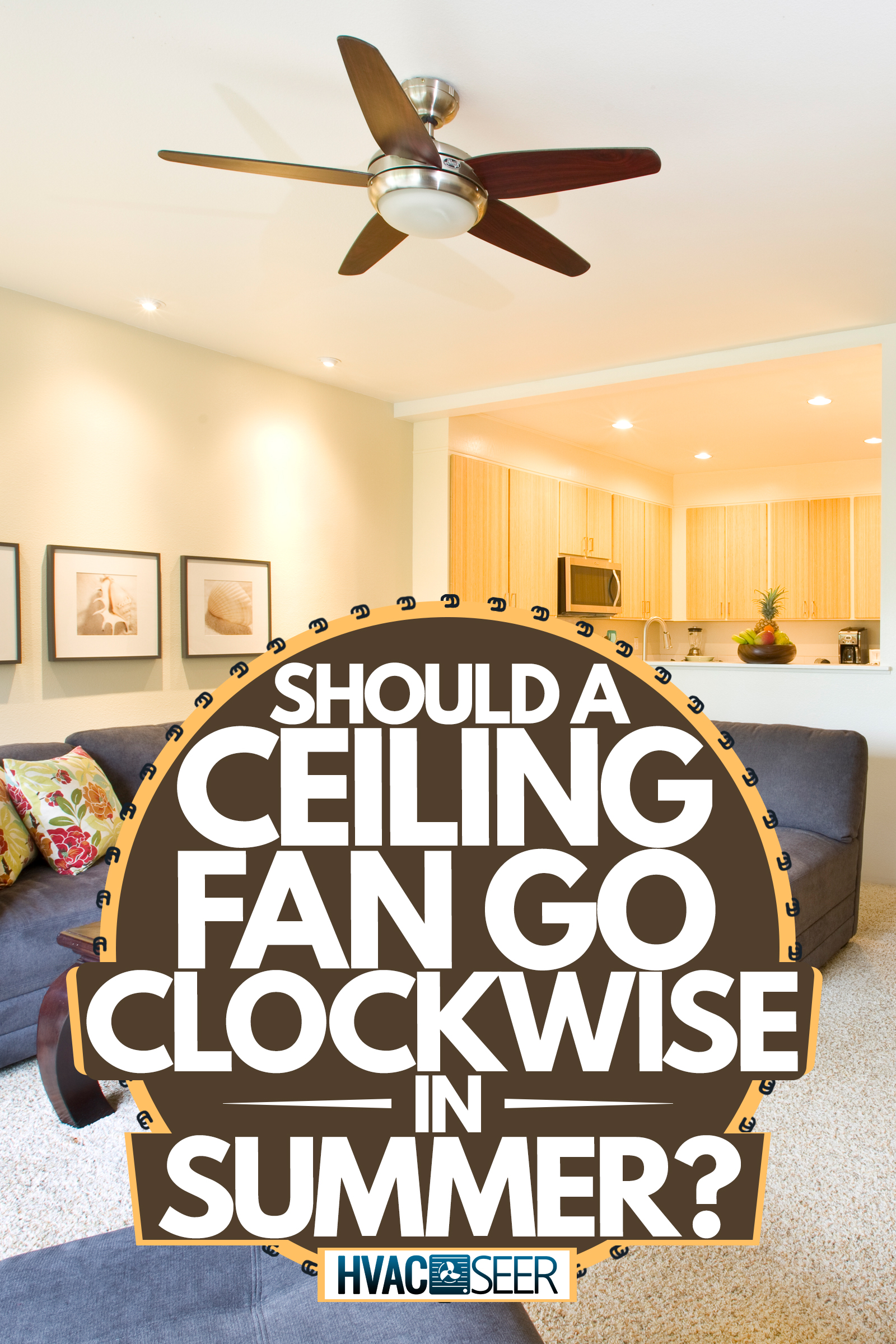 Ceiling Fan Direction In The Summer 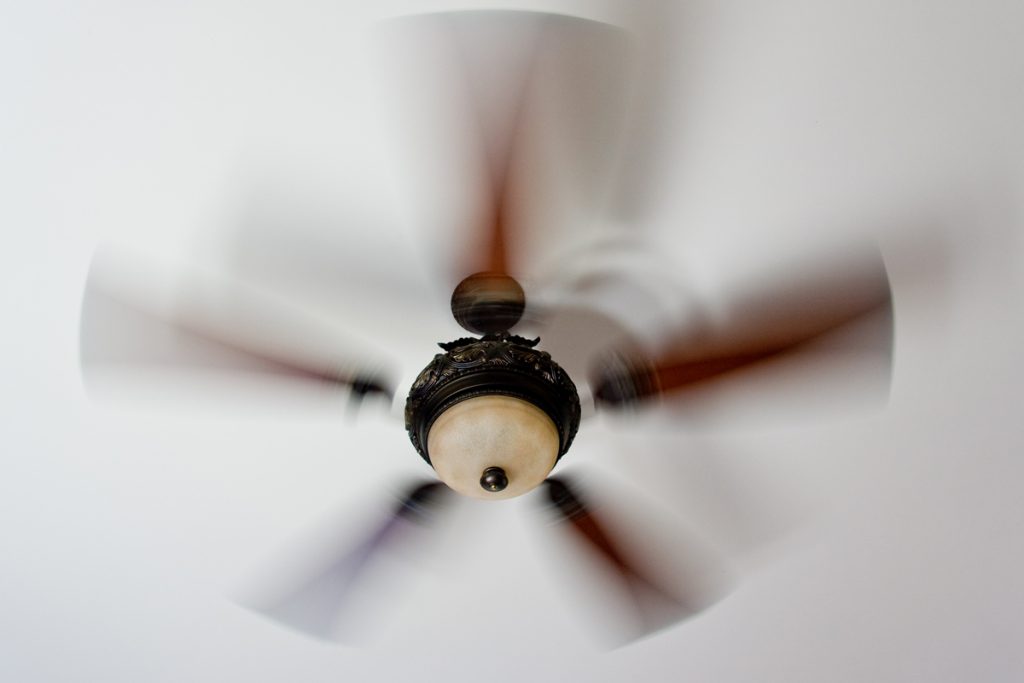 When a ceiling fan is set to spin in a counterclockwise direction, it blows the room's air downward which creates a cooling breeze. The reason that we feel cooler when ceiling fans are running is that they produce a breeze (similar to the one produced naturally outdoors) that causes the moisture (aka "sweat") on our skin to evaporate. And the faster it spins, the cooler it makes you feel.

It's important to understand that ceiling fans don't actually change the temperature in a room, they only make you feel cooler by removing the moisture from your skin. The moment they stop spinning, you will begin to feel warm again, especially if there is no air conditioning system or unit running.

Running a fan counterclockwise in the summer can help you save money on air conditioning costs, as it will allow you to raise the temperature on your thermostat. How much can you save, you ask? Well, it always depends on your location and certain factors in your home, such as insulation and the number of windows in each room. However, just raising the temperature on your thermostat by only 3 degrees while using a ceiling fan can help you reduce your energy costs by anywhere from 12-15%.

Ceiling Fan Direction In The Winter

During the winter months, ceiling fans will produce the exact opposite effect. In colder seasons, ceiling fans should be set to rotate clockwise. Doing so is recommended because it allows the fan's blades to circulate the warm air trapped close to the ceiling of a room.

Air rises to the top of a room as it increases in temperature, meaning the floor-level temperature will typically be cooler than eye-level or ceiling temperatures in a room. Also, when you have your central heating system or a furnace running during the colder months, the heated air will blow out of the vents, and then will eventually gather at the ceiling.

So to help warm a room, you should set the rotation on the fan clockwise so that the air closer to the ceiling can be pushed upward and outward, allowing it to move around the room's perimeter. Doing this helps you create a more even spread of heat inside a room (especially smaller ones), as well as eliminate some of the cold spots.

Also, be sure to place it on a low setting to keep it from producing a strong draft (you don't want it to create a cool breeze), which would defeat the purpose of turning it on during this time of year.

Changing the rotation on your ceiling fan using these two rules can help you keep your house as comfortable as possible. It will also help you save money on energy costs during each season.

Other Scenarios For Rotation Direction

There are also a few other scenarios in which the direction of your ceiling fan can help you get the best airflow during any season:

It's also helpful to change the direction in which your ceiling fan operates according to how you prefer to sleep at night. For example, if you tend to get warmer at night and prefer a breeze to stay cool, but don't want it blowing directly on you (because of allergies, dust, etc.), you can set the ceiling fan to rotate clockwise at a high-speed. On the other hand, if you don't mind a direct breeze blowing over you while you sleep, you should turn it counterclockwise.

To Air Out A Room

Sometimes it can seem like bad odors never want to leave your home, permeating in it for hours or even days. If you find that this is the case in your home, you can use your ceiling fan to help air out the foul-smelling (or smoke-filled room) by setting the ceiling fan to run clockwise at a medium or high speed. Doing so will allow the fan to draw the air up and out toward the windows or doors of the room.

Nothing's more annoying than setting down a piping-hot dinner plate on a dining table, only to have it grow cold within a matter of minutes. Changing the direction of your fan may be able to help. You can turn your ceiling fan clockwise to help push the air upward, keeping the room a bit warmer. Also, be sure to set it on a low setting, as to avoid strong breezes.

How Do You Tell If Your Fan Is Going Clockwise Or Counterclockwise? 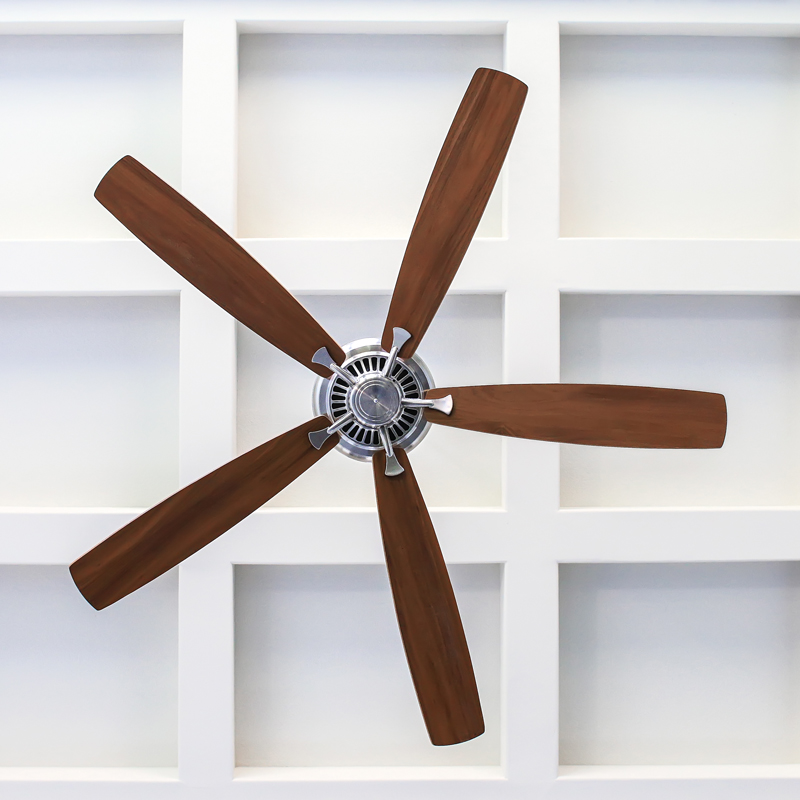 Sometimes, understanding ceiling fan rotation can be a bit confusing when you're installing a new one or changing the direction of a current fan. Here's how you can determine the current direction in which direction your ceiling fan is rotating.

What Is The Switch On A Ceiling Fan For?

The switch located on a ceiling fan is used to adjust the fan's rotation setting. Most of the fans today include this toggle switch, which is typically located on the housing of the fan's motor. Other fan models may use remotes or wall controls to change this setting. The process for changing a ceiling fan rotation is fairly straightforward, usually only requiring the flick of the toggle switch (either vertically or horizontally depending on your fan model) on the ceiling fan or the press of a button on the wall or remote control.

For the most part, it's okay to leave your fan running for several hours at a time. Ceiling fans are designed for long-term and constant use, and many people do this to keep the air in a room circulating continuously while they're out. Doing so helps to keep a steady temperature in the room.

However, if you want to prolong the life of your ceiling fan, it's best to only use it when someone will be present in the room. Or, as mentioned above, you're looking to speed up the process of clearing smoke or bad smells from a room or the entire home.

A couple of exceptions are if your home's central air thermostat is located in an area in the home that tends to stay warmer than the room. By circulating the air in the room, the fan helps to distribute cooler air to the area close to the thermostat, preventing the air conditioner system from kicking on as often (which means a lower energy bill during the summer).

The other exception is if your home has poor circulation and the ceiling fan is left on to help distribute cooler air between rooms which may have differing temperatures.

Though electric fans aren't known for causing energy bills to skyrocket, it's always helpful to have some estimate of how much it would cost to run the fan 24/7. So, here's a quick breakdown of how much it costs to run a ceiling fan all day:

Power companies measure electricity in kilowatt-hours, and the average ceiling fan uses anywhere from 60 to 174 watts of electricity (so about 0.065kW to 0.175 kW). Depending on your location, electricity costs can range anywhere from 12 cents to 20 cents per kWh, so the fan will cost about 2 to 3 cents per hour to operate. Compared to other cooling methods, fans are by far the most budget-friendly way to keep your home cool-even when you run them 24/7.

Ceiling fans aren't known for posing serious dangers to a home or its occupants. However, a badly installed fan just may. If a ceiling fan has loose screws on its base mount or light housing, it can fall from the ceiling, causing injuries or damage to you or your furniture.

Ceiling fans provide an economical option for enhancing the level of comfort in your home, both during the winter and summer seasons. We hope that this guide has helped you to understand why it's important to note the direction that your ceiling fan is rotating in.

Before you go be sure to check out our other posts:

Does An Electric Fireplace Give Off Heat?

What Happens If You Never Open Your Windows?

How Close Can A Ceiling Fan Be To A Vent?

How Long Should You Charge A Nest Thermostat?

Are Bissell Air Purifiers Made In The USA?

Does Cellulose Insulation Settle? How Much?

How To Change A Run Cap In Goodman Air Conditioner Unit