Many homes today are equipped with ceiling fans. Ceiling fans are a great option for cooling your home during warmer months and are an absolute must if you have an older home that is not equipped with traditional central heating or other types of air conditioning. A common issue with ceiling fans is that at some point they may begin to run slower than normal. We've put this guide together to help you learn the most common reasons for this problem and how to troubleshoot it.

Ceiling fans can run slow due to any of the following reasons:

Ceiling fans are subject to mechanical issues just like any other type of appliance. Now, let's take a closer look at some of the reasons listed above and how they can be fixed. 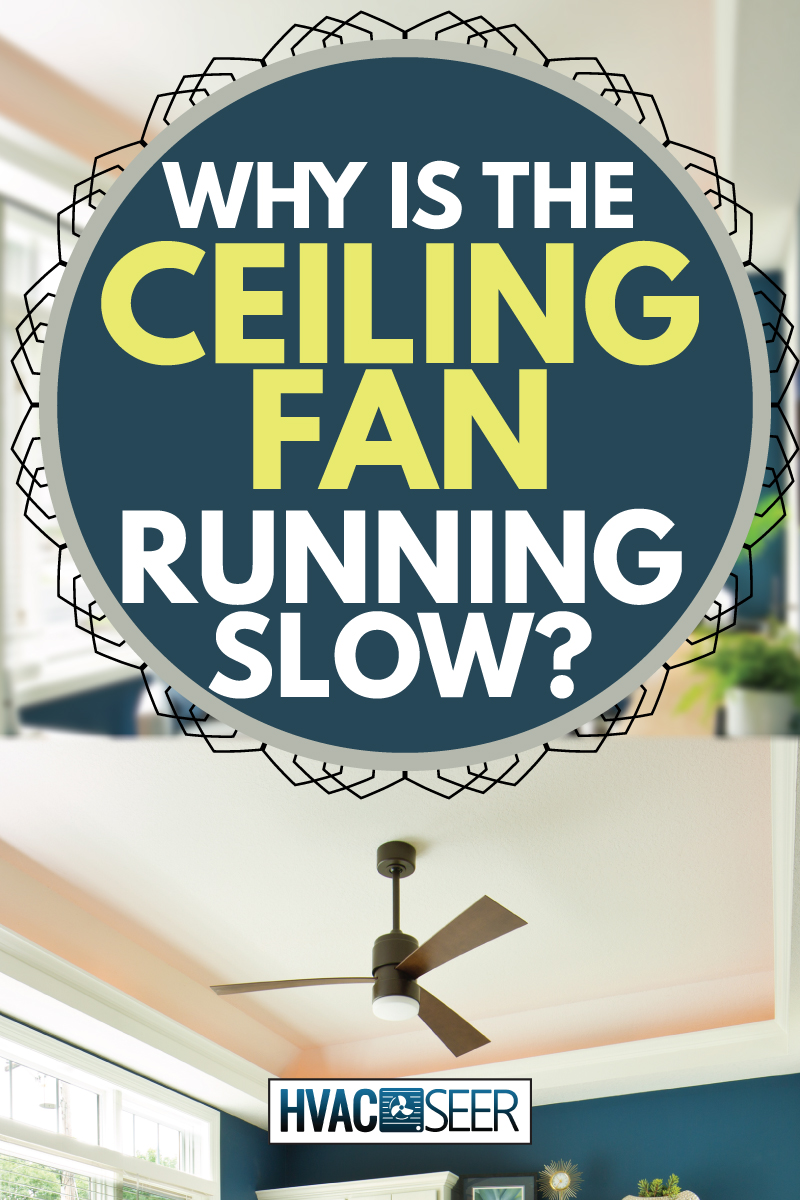 Why The Ceiling Fan Is Running Slow 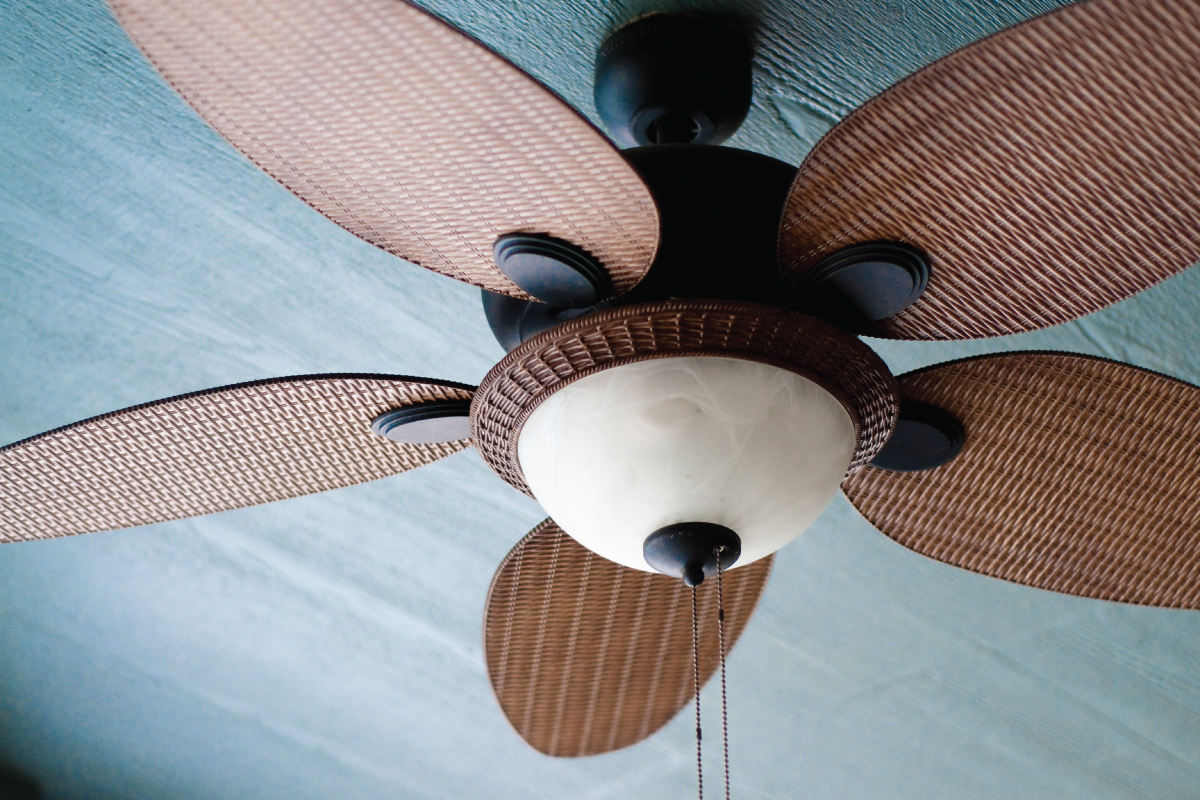 The capacitor of a ceiling fan is responsible for delivering the correct amount of power to the motor. Over 90% of ceiling fan issues are caused by a bad or failed capacitor. When it fails to work, power cannot be transferred to the motor which can cause your ceiling fan to run slower than normal, or stay at the same speed when you increase its frequency.

What Can Cause A Ceiling Fan Capacitor To Fail? 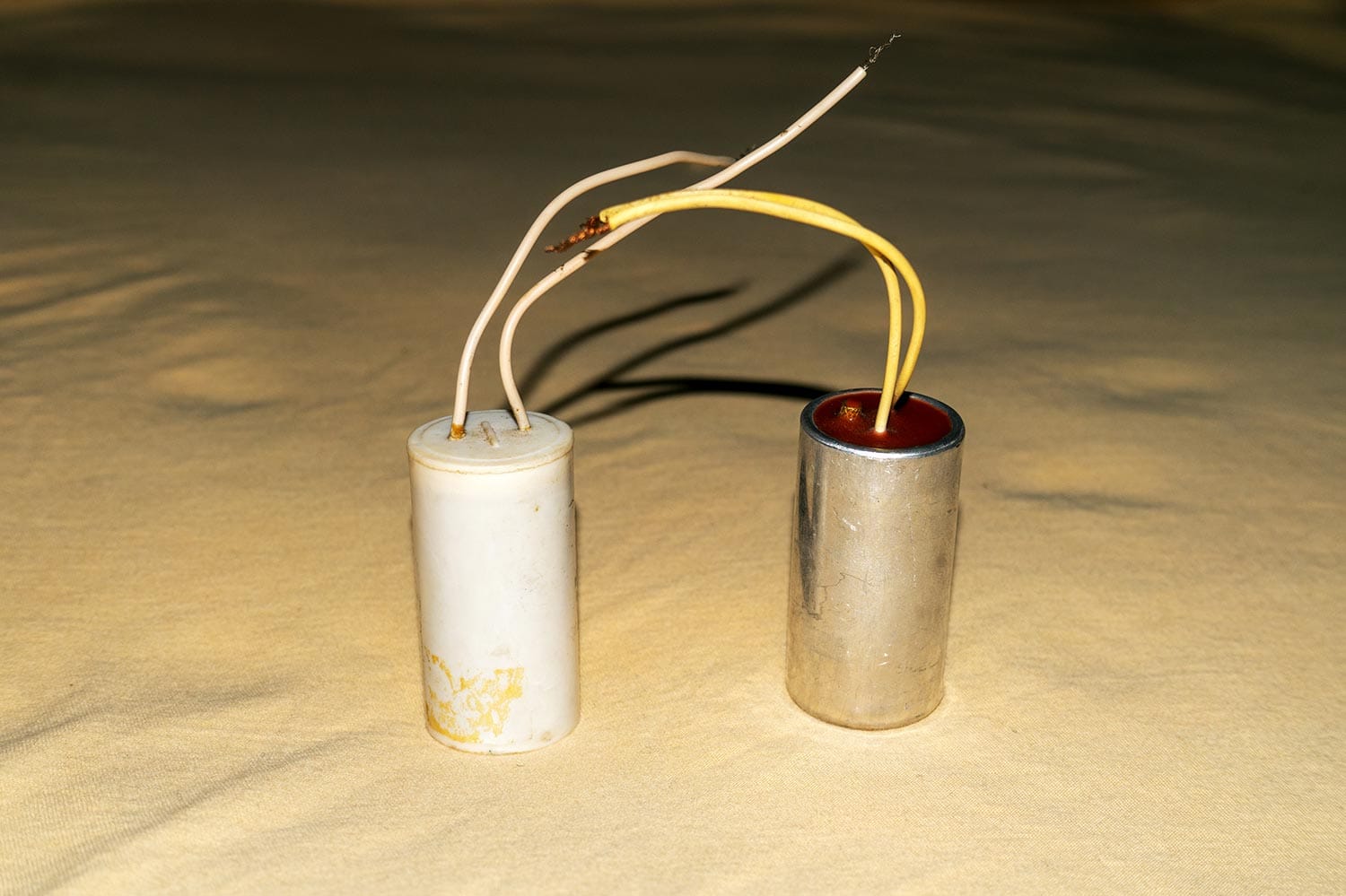 One of the most common reasons for capacitor failure is an electrical overload or a power surge within the home. When the motor in the fan starts to exceed its designated speed, the capacitor will typically disengage as a fail-safe to prevent it from overheating or causing other operational damage. If the motor doesn't engage, an electrical overload is likely to occur at some point.

These overloads can quickly and easily cause irreparable damage to the capacitor, as any voltage use above the capacitor's limit or "max" can certainly destroy it. Power surges from outside electrical wiring or thunderstorms can also cause them to experience a blowout.

Capacitors provide the main function of a ceiling fan's motor and are surprisingly very sensitive devices. Over time, they can burn out from simple everyday use, as the inner components begin to wear out and break down. A sign that a capacitor is starting to wear down is when the fan motor takes a longer time to shut down, as opposed to a short smooth shut down in a matter of seconds. This can cause a motor delay and often results in the capacitor overheating. Another sign of an aged capacitor is when it begins to leak oil (aka "motor lubricant").

If you find that the capacitor in your ceiling fan is the reason for its slow speed, it's best to call an experienced electrician to have it replaced. However, if you have sufficient electrical knowledge, you can replace this part yourself within an hour or two.

An Overview Of The Steps To Replace A Ceiling Fan's Capacitator 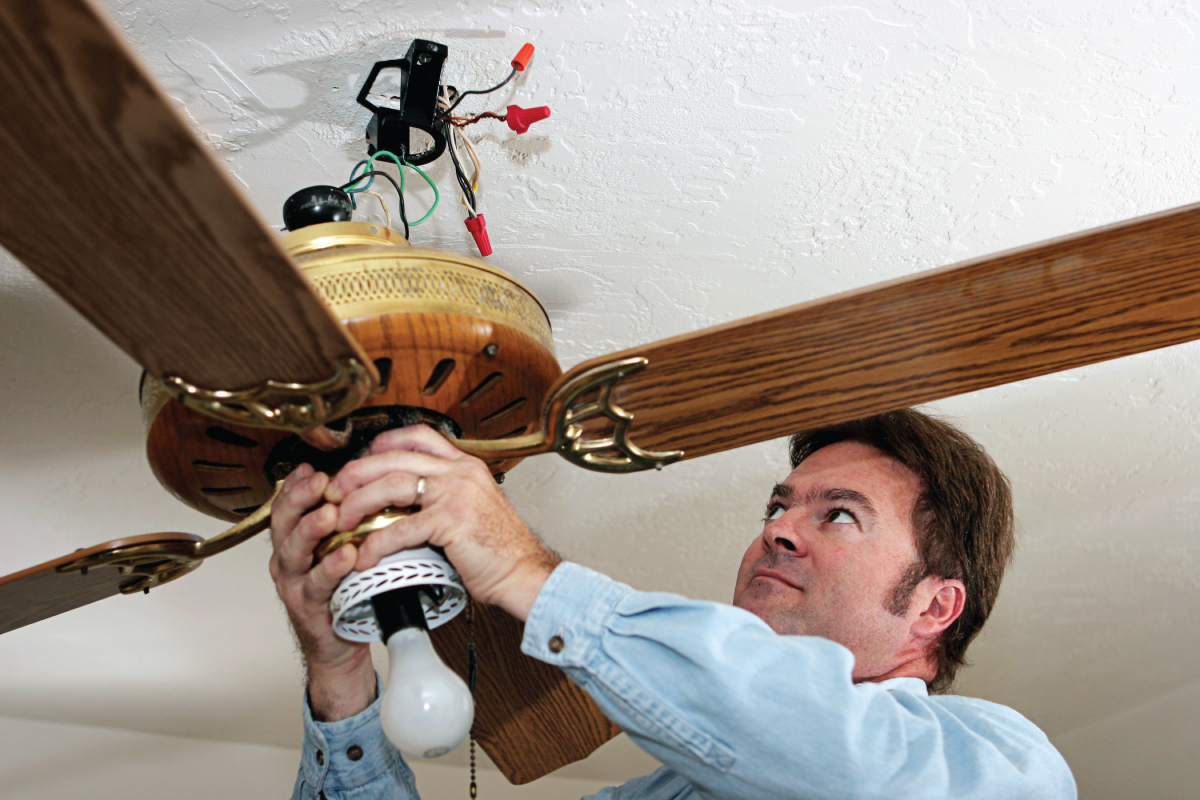 Replacing the capacitor in a ceiling fan is actually a fairly straightforward process. You will need to check the schematic in the instruction manual to determine the capacitor value (measured in "microfarads).

Check out these wire cutters on Amazon.

Unbalanced Blades That Cause Wobbling

As a ceiling fan ages, its blades may become unbalanced at some point. It can be all of the blades on the fan or simply one or two. Blades that have become warped or damaged will also cause an imbalance. To determine if imbalanced blades are responsible for your fan's slow-speed, it's helpful to get on a ladder and inspect the blades closely.

If you notice damaged or bent areas on any of the blades, you can remedy this issue by either replacing the blades or fixing them if they're bent. If you find that the damage is irreparable, it's best to replace the entire blade. Blades that have been set at an angle different from the other blades on the ceiling fan will also cause an imbalance. This could be due to a lack of quality assurance from the manufacturer (or a poor DIY blade replacement) and may be covered by a warranty.

Over time, it's common for a ceiling fan to begin slowing down as a result of the accumulation of dirt, dust, and debris inside of the ball bearings (most have two bearings). After years of use, oil and dirt that has built up inside the bearing can make it harder for the blades to spin. If the bearings have caked-up oil or dirt on them, you can use a wet wipe (or pointed scraping tool) to thoroughly clean them.

Be certain that the power is shut off to the room/fan before starting this task. After wiping them down, set them aside and allow them to dry completely (if you used a degreaser) before installing them back in the fan. Be extra careful when cleaning the bearings so that you don't damage any of the components. It's also helpful to wipe down the blades of the fan to prevent the circulation of dust and debris in the air.

If you find that the rotational speed has not changed after cleaning the bearings, then they may need to be replaced completely.

Another issue that may be causing your ceiling fan to run slowly is loose screws. This is most commonly found in fans that have not been installed by a professional (i.e. DIY installations). You can often detect this issue by listening for any rattling sound coming from the blades. When installing a new fan on the ceiling, it's important to ensure that the screws are fastened tightly. Loose screws can pose a serious safety hazard once the fan becomes operable.

The lubrication inside a ceiling fan's motor is crucial to effective and efficient operation. Without lubrication, the moving parts inside the motor can begin to dry out and will eventually stop functioning. The lubricant, for the most part, functions similarly to the oil used for a car engine and in any other type of motor-operated devices.

Older fans or ones with damaged motors can leak oil, causing the parts inside to work extra hard to operate. You can check the instruction manual that came with your fan to determine how and where to add additional lubrication to your fan's motor. The process typically consists of removing the light casing and motor from the fan and then using a squeeze tube of lubricant to apply it to the fan's motor or bearings.

Check out this motor oil on Amazon.

Can A Ceiling Fan Run Without A Capacitor?

No. The capacitor inside a ceiling fan is not only needed to start the fan's motor but to keep it running as well. Even if you try to manually rotate the fan's blades with your hand, they will stop after a few seconds. This is because the capacitor creates a magnetic flux that allows the blades on ceiling fans to rotate continuously.

Why Does Your Ceiling Fan Turn On And Off By Itself?

There can be a few reasons why a ceiling fan will turn on and off by itself. Here are the most common reasons:

Remote Frequency Needs To Be Changed 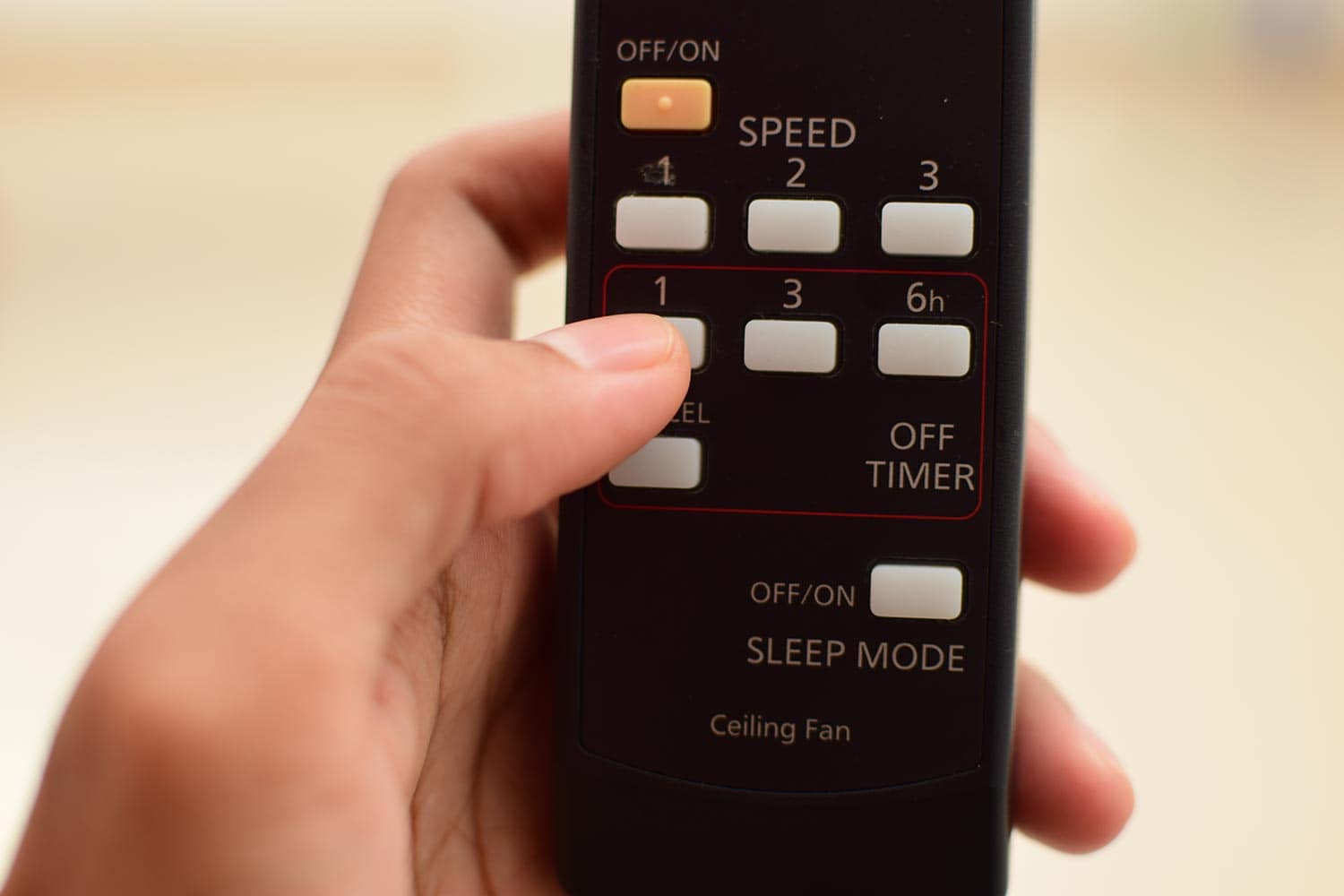 Remote-operated ceiling fans come with a frequency selection switch on their remote control. If your fan is slowing down, first check the current selection on your remote control to determine its current setting. If you need assistance with operating the remote control to your fan, take a look at the instructional manual that came with it. Or, you can just do a Google search for the brand name and model number online. You can also call the manufacturer directly.

If the wiring inside of a ceiling fan's housing is frayed, it can cause the fan to power on and off on its own. To see if this is the reason for your issue, take a look inside the ceiling fan's housing and inspect wire connections. Check to see if the connections are snugly fit and if the electrical wires are intact. If you notice any frayed or damaged wires, they will need to be either cut out and replaced or repaired with electrical tape.

Most ceiling fans will last anywhere from 7 to 10 years before experiencing any type of malfunction. Ceiling fans, for the most part, are fairly durable home appliances. A decent ceiling fan can last for several years, given they are well-maintained and not overused (such as leaving them running 24/7). Also, most ceiling fan brands offer parts and service warranties anywhere from 1 to 3 years.

How Do You Adjust The Speed Of Your Ceiling Fan? 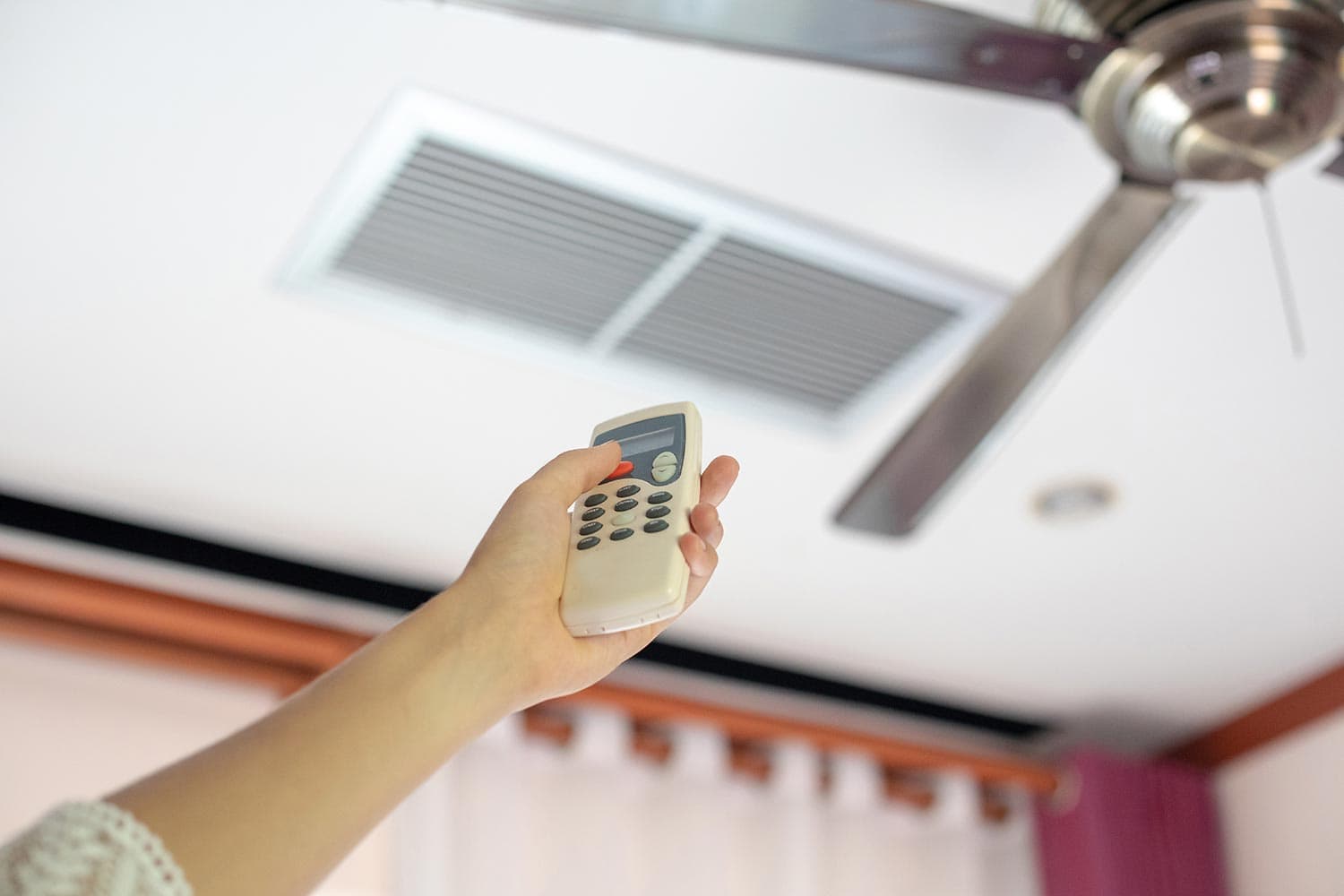 If your fan is controlled by a remote, you can simply adjust the setting using the remote control that came with your fan. If you need assistance, it's best to check the instructional manual as well. If your fan is not operated using a remote control, you'll need to adjust its rotation switches. These switches are typically located either on the top of the fan's motor assembly or inside the lower bell housing.

If its receiver is located inside the fan's lower bell (which should be checked first), remove the screws holding the light assembly on and then pull out the receiver to access the switches. You should be able to reach them fairly easily.

If the receiver is located in the motor assembly, you will need to remove the fan from the ceiling and manually adjust the switches. There are no electrical tasks involved in this process.

As you can see, there are only a handful of reasons why a ceiling fan may begin operating at a slower speed than normal. If you find that your fan isn't rotating as fast as it should, be sure to check for the above culprits so that you can troubleshoot the issue correctly. Or, you can call a licensed technician who can do this for you.

Before you go, be sure to check out our other home improvement posts:

Ductless Air Conditioning Not Cooling - What Could Be Wrong?

What Flooring Is Best For Heated Floors? [4 Types]

Can You Install A Window Air Conditioner Through A Wall [And How To]?

RV Water Heater Making Noise – Why And What To Do?

How Warm Can a Pool Heater Get a Pool?

How Long Does It Take To Install A Furnace?

How To Ventilate When Painting [And How Long After?]