The ease of having a fire alarm system in your home is truly life-saving. Even so, sometimes this dependable device could also act strangely. If you ever experience your fire alarm going off randomly and are not sure why this problem arises, we've found the answer you seek.

This particular issue could result from faulty components or your home's ambient condition being poorly maintained. Nonetheless, here are the reasons why your home fire alarm system sets off and then stops irregularly:

Your fire alarm system is composed of other complex vital sensor devices that operate well when properly maintained. Keep on reading and follow us below to know the other significant question about this matter. With that said, let's jump in!

How Do Fire Alarm Systems Work?

Alarm systems work to alert the property's occupants of danger and typically send a signal to a fire department. Alarms alerting the fire department might not be the case in all situations. Fire alarm systems are essential to detect a fire at its early stage for residents to evacuate instantly.

Fire alarms can also boost the safety of those who respond to fire emergencies by early detection. In addition, early detection helps prevent property loss and response downtime since control efforts initially took place. The majority of alarm systems tell emergency personnel of the location of the fire, which accelerates the firefighter's response time.

Furthermore, fire alarm systems consist of other sophisticated systems to secure effective operation. It includes a suppression system with sprinklers to extinguish the fire, a detection-based system, and a smoke detector system.

What Are The Components Of Fire Alarm Systems?

Your fire alarm systems consist of many crucial components to function effectively. This includes the following:

This is the heart of your system and where all the input data is being processed. Its function is to monitor the system status, control the status reading, and transmit the information.

This is the main dedicated power circuit of the fire alarm system. This circuit comes in usually in a 120V or 240V alternating current source.

This serves as the generator of your fire alarm system during a power outage or failure. It has a battery that is often found in the bottom portion of the panel or near the panel's battery box.

These devices include several crucial sensors that can be activated automatically or manually. Depending on the design of your fire alarm system but are mostly comprised as follows:

When your fire safety alarm triggers, you'll hear the siren, horn, or even see LED lights flashing continuously. All of these are features that your fire alarm system. 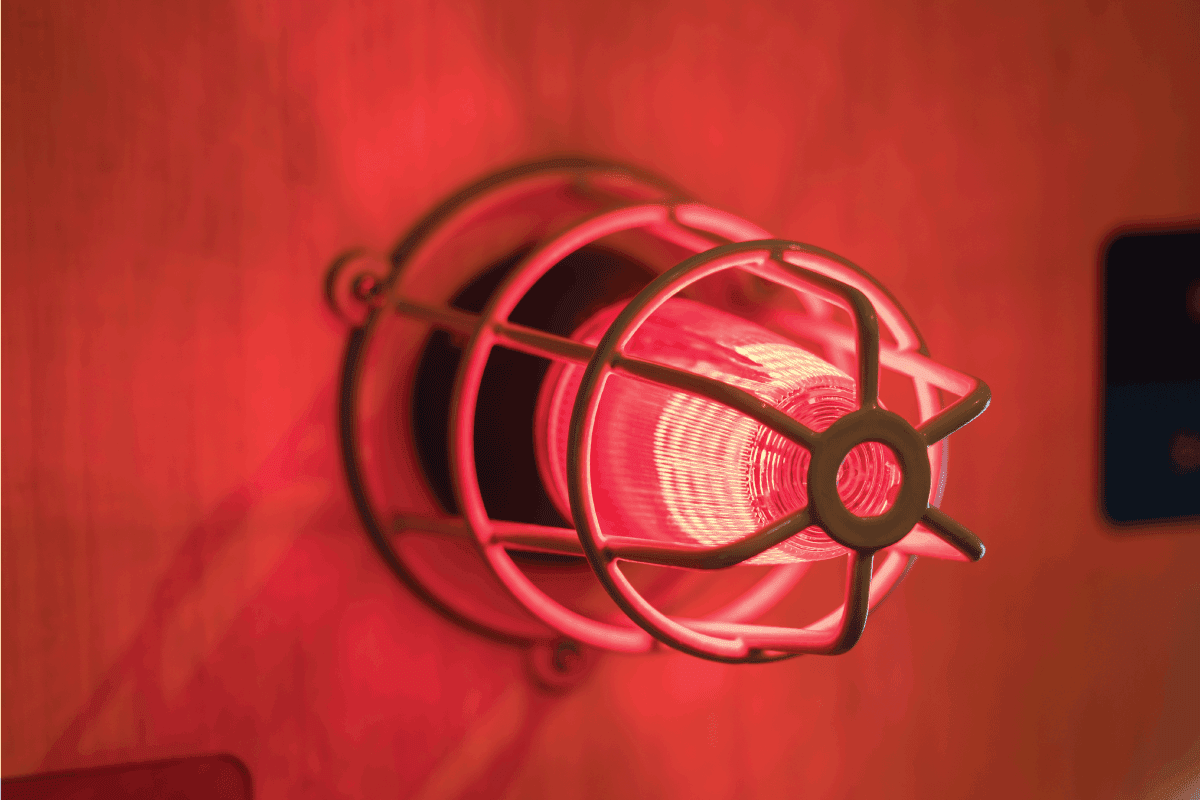 This component lets the fire alarm system control panel evaluate the current situation. Right after, it acts accordingly to provide information to the house occupants. What's more, it can also supervise safety evacuation into safe exit routes and control the smoke and fire escalation.

What Are The Reasons Why Your Fire Alarm System Randomly Goes Off?

It's not usually a house fire that sets off a fire alarm. A fire alarm activation can occur in various situations. Nevertheless, the majority of these alarms are just false, and will not pose a threat to you or your family. 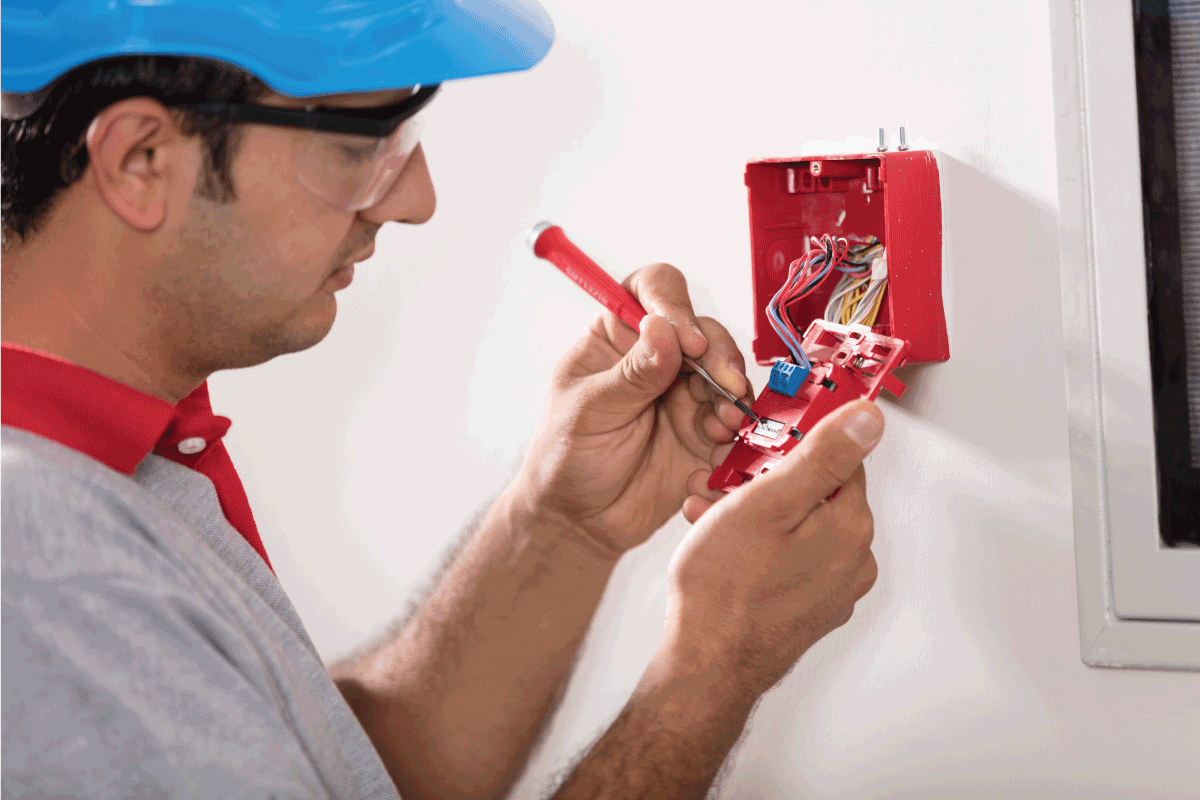 Find out the common reasons your fire alarm suddenly activates below:

The other probable cause of triggering a false alarm is the poorly set up electrical grounding to your house. Employing the correct grounding in your home helps all your appliances to function well, including the fire alarm system.

The best practice is to install grounding bars at six feet distance apart from each other, or at least twice the bar's distance apart. Doing so prevents your fire alarm system from going off on its own.

If your fire alarms keep going off suddenly and it turns out it's not a fire-related issue, it's most likely that it is due to its overly old system. It became defective. Replace your fire alarm system because it doesn't last forever.

Smoke detectors rely on batteries, so it's best to replace them regularly. According to experts, 24% of smoke alarm failures are the results of a system with dead batteries. It is necessary to replace it every year.

See this AA battery best for a smoke detector on Amazon.

Dirt And Dust Build Up

An overly dusty or dirty fire alarm system will sometimes result in its sensors reading improper thermal conditions. Thus, a false alarm often occurs. You can remedy this issue by cleaning your system once a month.

Excessive Smoke In Your House

In essence, your fire alarm system kicks off the alarm when it senses high-density smoke in your house. Smoking cigarettes or vapes within your home can activate its alarm.

In 2016, cigarettes, pipes, and cigars were among the 5% of smoking materials causing 660 deaths in home fire cases. Apart from smoking, as you might not know, excessive cooking smoke in the kitchen can also trigger the alarm.

How Do Smoke Alarms And Carbon Monoxide Detectors Differ?

Undetected smoke can be deadly, especially if the initial burst of smoke happens while you're sleeping. These sensors are very crucial in this kind of situation to warn us and give us time to evacuate.

A photoelectric smoke alarm is critical in the early stage of smoldering fires. For instance, a cigarette falls onto soft cushion materials or furniture like a bed or couch. This sensor will alarm you quickly in its initial combustion of about 0.3 and 10.0 Micrometre (µm) of particles.

Meanwhile, the ionization alarm can detect fire in its initial flaming state, particularly in papers, paints, or curtains. This alarm is way faster to respond than photoelectric smoke alarms as it alarms you within 30-60 seconds. Since smoke is lighter than carbon monoxide, smoke detectors are ideally installed on ceilings or walls in your living room. 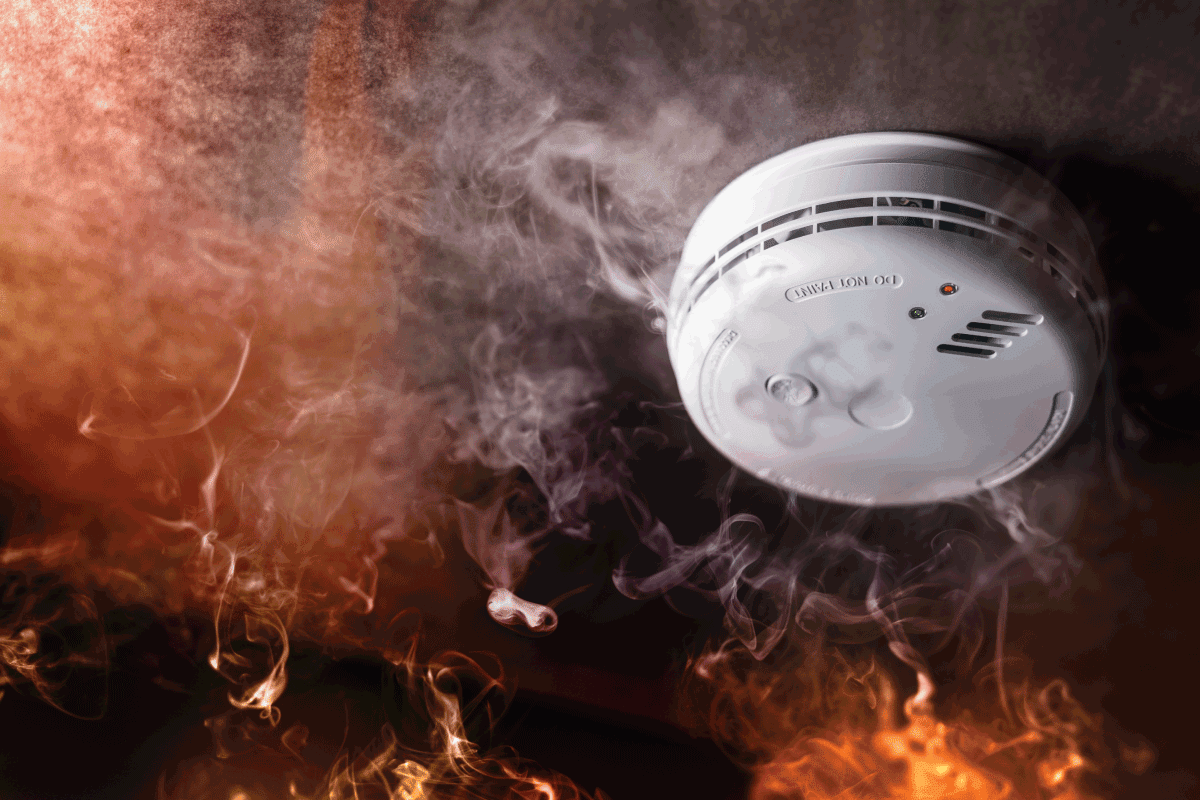 In contrast, carbon monoxide (CO) detectors must be installed in any lower area on your floor. This is because CO gas is naturally heavier than smoke. Burning materials such as wood, charcoal, coal, and even your appliances can produce CO gas.

Inhaling over the 9 ppm limit for longer than eight hours will harm a person's health. This will cause you dizziness, severe fatigue, breathing issues, numbness of muscles, and more.

How Do I Reset My Fire Alarm System?

After acknowledging a fire alarm, fortunately, that was false, resetting your system should be next.

Note: You must ensure that your smoke sensor is free from any amount of smoke when performing these steps.

How To Test A Fire Alarm System? 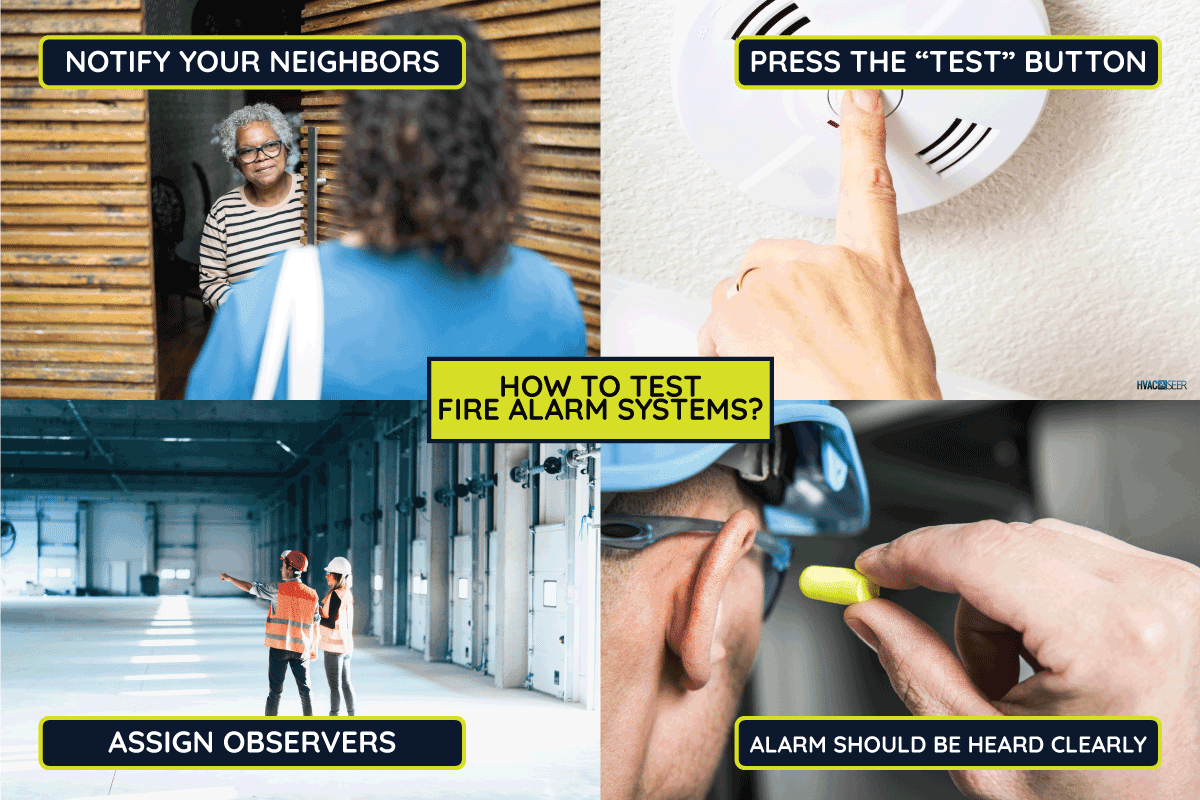 Pro tips: The above guidelines will only help you determine that your fire alarm is operational with your electrical system. The only way to reliably know that it is perfectly operational is to light up a match directly to its sensor. 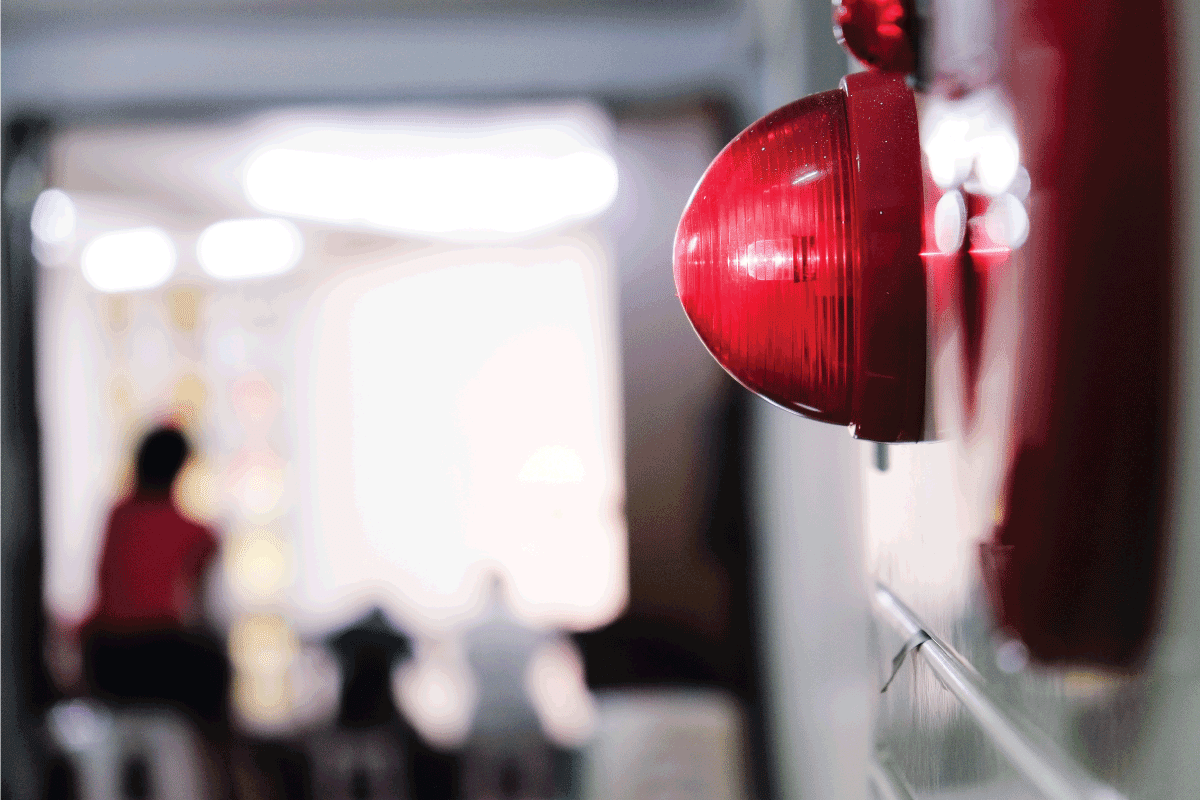 Your fire safety alarm system offers you and your family safety fire precautionary measures all year round. Knowing why your fire alarm system goes off randomly provides you with an idea of what proper fixes it requires.

Remember that it is better to exert some effort to check its other components than feel sorry later on. We hope that providing you with this information helps you care for your fire alarm system well from now on.

Made it to the end? Read our other helpful article below!

How To Turn Off A Radon Alarm

Why Is My Smoke Detector Blinking Red Every Few Seconds?

How To Keep Furnace Or HVAC Condensate Line From Freezing

PTAC Unit Compressor Not Working – Why And What To Do?

How To Program A Fanimation Remote

What Temperature Should A Living Room Be?

How Much Space To Leave Around Outdoor HVAC Unit?