Tall vaulted ceilings can make rooms look larger and add a sense of character to the space. If you're considering adding a fan to the room, you may be wondering if it's possible to set it up on the ceiling, given its slope. Well, we've researched the best approach to doing this, and in this post, we will go over it. 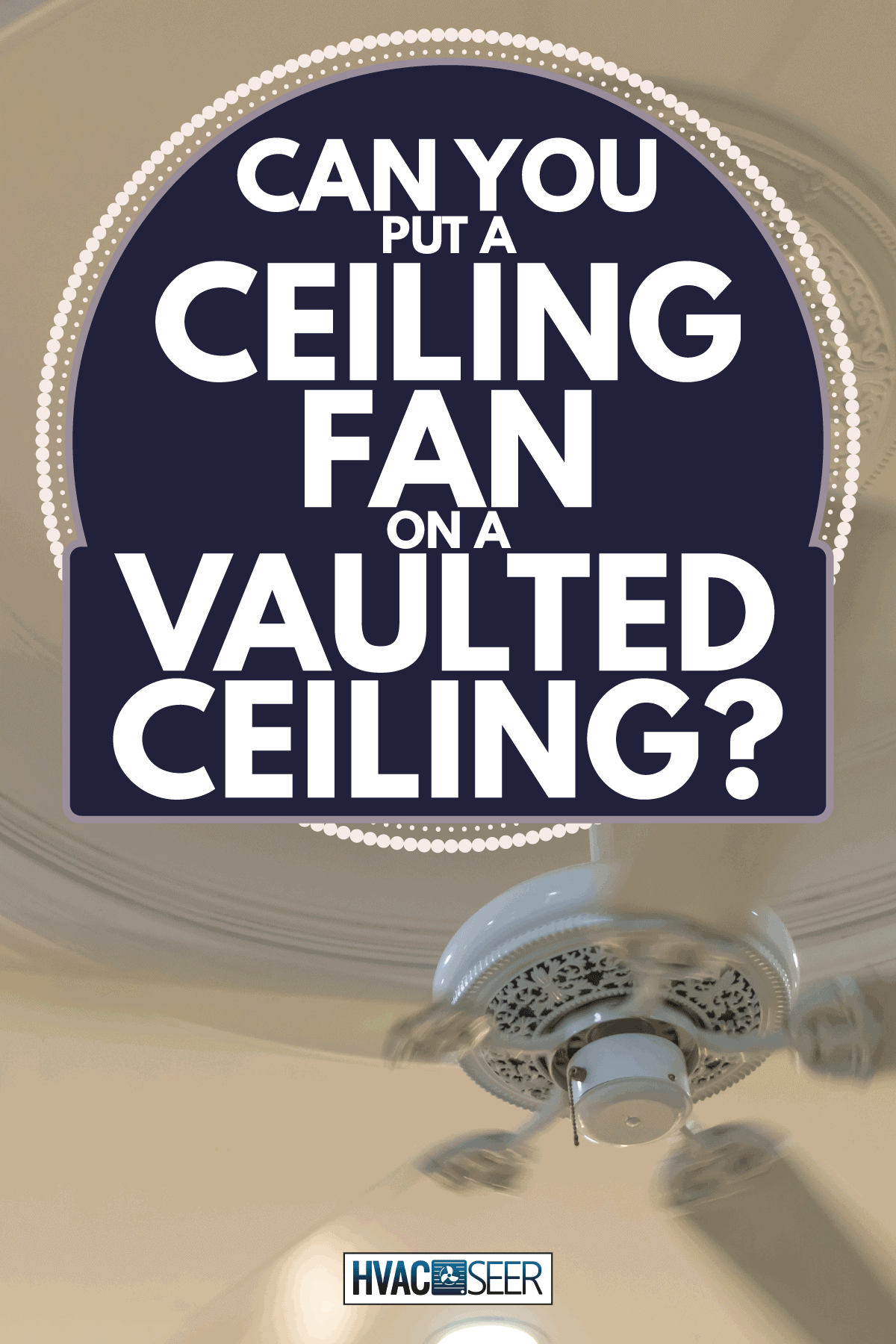 Sizing A Fan for A Vaulted Ceiling

As with any room, you'll want to make sure that the ceiling fan is the right size for the room. A typical vaulted room ceiling fan can be anywhere from 42 to 44 inches. However, you can also fit a fan anywhere from 60 to 90 inches, depending on the height of the room and the layout.

Most ceiling fans come with mounting hardware to hang flat on the ceiling or at an angle, and some may even come with adapters that allowed to have the fan to hang at 45° more, so you'll want to check the make and model of the fan to determine if it will work for your ceiling.

The ceiling height will determine how long the downrod will need to be, as they typically need to be about 7 to 8 feet from the floor--and longer for vaulted ceilings.

Steps To Install A Ceiling Fan On A Vaulted Ceiling

If you have a fan that is mountable on a vaulted ceiling, here are the basic steps that you can use to install it:

1. Measure the angle of the ceiling

First, start by determining the angle of the ceiling by using your level and placing it against the ceiling. Then measure the vertical distance between the level and the ceiling. Next, take a look at the directions that came with the ceiling fan to determine if you have the ceiling's proper measurements and fan size. If so, proceed to the next step.

Check out this level on Amazon.

2. Turn off the power and install the fan box

Next, turn off the electricity to the room where the ceiling fan will be installed to prevent possible electrocution. You can do this at the breaker box, which is typically located in the basement of a home. Then, remove the old fan and old brace box from the ceiling. Next, take out the brace box for the new fan and use your screwdriver to attach the new box to the ceiling.

Be sure to pull out the electrical wires through the new box to hang freely through the hole. Keep in mind that if the ceiling has a deep slope, you may need to rotate the shaft of the box to help secure the brace onto the framing.

Next, feed the wire hangers through the new fan's hanger bracket and make sure to slide them through the box over the top of the saddle screws. Next, tighten the nuts so that the box clamps onto the shaft and is well secured. You can tighten them using a socket or a nut driver. Make sure that the hanger bracket is positioned on the uphill side of the vaulted ceiling.

Then, tighten the downrod using the lock nuts and screws that came with the hardware package. Be sure to tighten all nuts and screws firmly, as this is one of the biggest reasons why fans may begin to wobble.

Once the fan and motor housing are secured, set up the wires and switches. It's essential to take a quick look at the diagram that came with the fan before connecting any electrical wirings. Keep in mind that ground wire will typically be a green wire. And the neutral wire will be the white wire. The hot wires would typically be blue or black--remember to attach matching colors (i.e., white to white wires, black wires to other black wires, etc.).

Now, take the blade fans and their brackets and threw them into the motor housing. This may be a bit challenging, so you might need to screw the brackets on the blades before attaching them to the fan. It's best to use a drill when performing this step.

Read more details about this drill on Amazon.

7. Connect the light housing and receiver

If your fan has a light and remote control, now's the time to attach the fan's light housing and radio receiver. Again, you'll want to follow the instructions that came with the fan to ensure that you are setting the receiver's code toggles correctly to connect with the electrical wall switch and remote control.

8. Turn on the power and test fan operation

How low should a ceiling fan hang from a vaulted ceiling?

The normal height for ceiling fans on vaulted ceilings is 12 inches. This means that your downrod will need to be at least 12 inches for the fan to operate safely on the ceiling. You'll want to double-check this when reading the directions for your ceiling fan, as the length requirement will be stated there.

Can all ceiling fans use a downrod?

Can you put a flush mount ceiling fan on a slanted ceiling?

It depends on the hardware included with the ceiling fan and the make and model of the fan. If the fan is exclusively meant for flush mounting, you'll likely need a ceiling mount adapter that's angled to attach the fan to the ceiling.

How do I know what size ceiling fan to buy?

Before purchasing a ceiling fan for your home, you'll need to know a few details about the room in which room you'll place the fan. You'll need to know the room's square footage, ceiling height, and angle degree--if it's not a flat ceiling.

Ceiling fans are sized according to their diameter. The fan's diameter is the distance from the center of the fan's fixture to the edge of its blade. This is important to note as you don't want a fan that's too powerful or large for a room. You'll also want to ensure that the fan is big enough to cool down the room sufficiently.

Here are the suggested fan sizes to use according to the room size:

We hope that this post has helped illustrate how to install a ceiling fan on a vaulted ceiling. Remember, taking accurate measurements of the ceiling's slope will ensure that the fan is installed safely. Also, remember always to check the fan's manufacturer's directions and suggestions for installing the fan correctly and safely.

Before you go, be sure to check our other posts:

Can A Ceiling Fan Be Too Big For A Room?

Are Ceiling Fans A Fire Hazard?

Toshiba Vs Mitsubishi Air Conditioner: Which To Choose?

Does Central Air Use More Electricity Than Window Units?

Trane Electric Furnace Blowing Cold Air – What To Do?

How To Unlock My Levoit Air Purifier [Quickly & Easily]

How Long To Wait Before Turning On A New Air Conditioner?

My Baseboard Heater Turns On By Itself – Why And What To Do?