Ceiling fans can upgrade your home's appeal and improve air circulation. They're cheap to run too. There are a few options you can pick if you want some installed. But can you install outdoor ceiling fans indoors? If that's your concern, let's discuss the possibilities.

There isn't a better way to choose than to put the two head to head. What's the difference between them? More importantly, should you use an outdoor ceiling fan indoors? These are some of the questions we'll address. To learn more, keep reading. 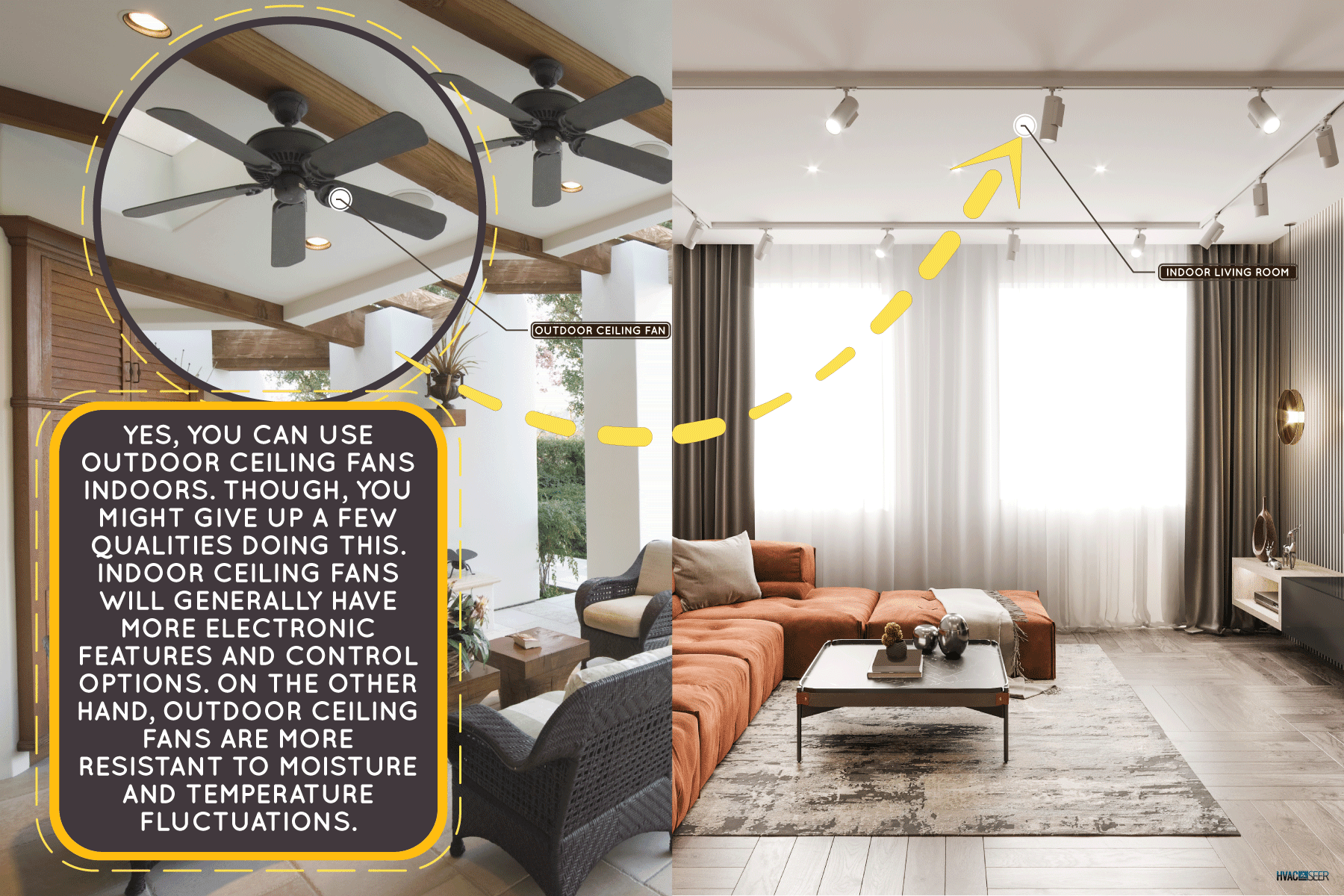 What's The Difference Between An Indoor And Outdoor Ceiling Fan?

At the surface level, it might appear like there's nothing different between the two. Both fans have large blades. Plus, they come in various styles. However, the big difference between the two comes from the inside. 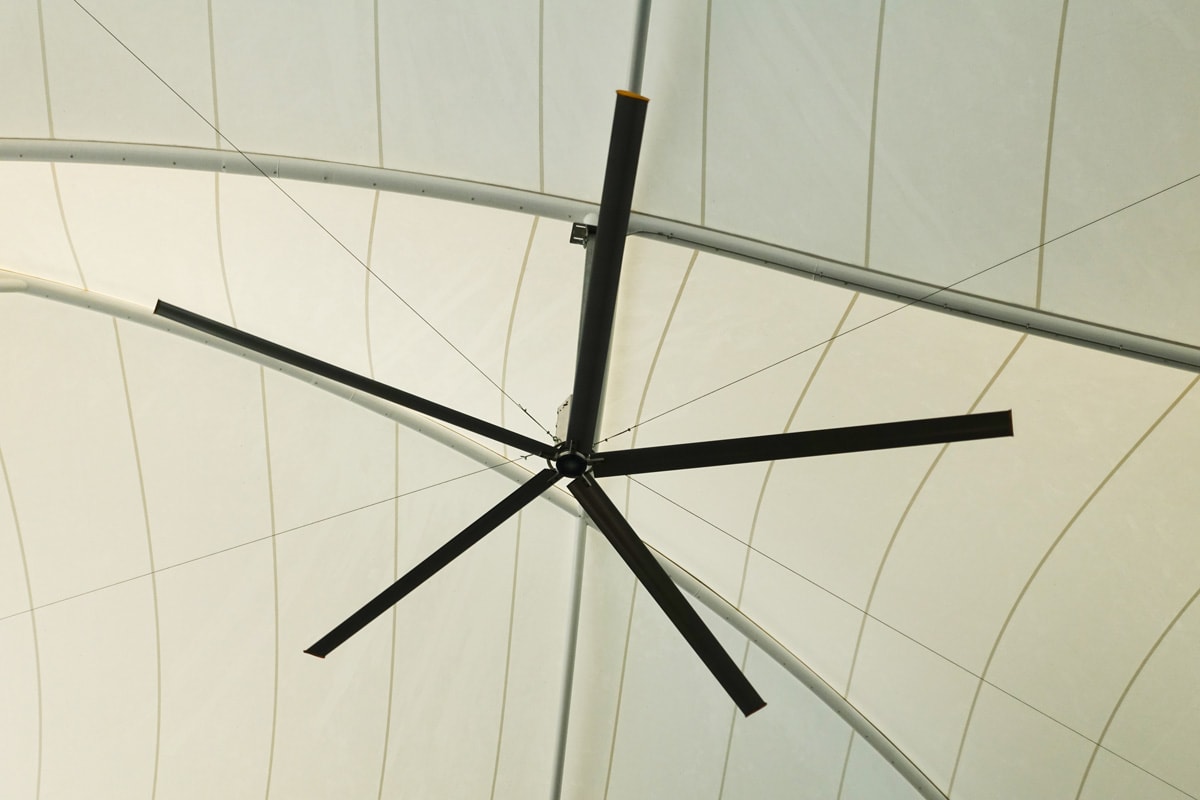 Ceiling fans will come with different ratings. The three are dry, damp, and wet. It's a color-coded rating that you find with the UL symbol. Faded blue UL symbols indicate the fan has a dry rating.

As you can guess, indoor ceiling fans are for indoor use only. You can install them in the bedroom, living room, dining room, foyer, and basement. If you try using these anywhere else, they won't stand the test of time.

The hardware will rust relatively quickly. In addition, the blades will warp because of temperature fluctuations. They're more barebones than the others. In other words, they lack the weatherproofing the outdoor fans have.

For this reason, they tend to be cheaper. Indoor ceiling fans can cost as little as $80 and as much as $300 or more.

Damp and wet-rated ceiling fans will fall in the outdoor category.

The fans with the damp UL rating have some moisture resistance. They can handle areas that don't have direct exposure to water, rain, or snow.

Damp-rated outdoor fans can go in areas like a covered patio, screened porch, kitchen, bathroom, etc. As you can see, these fans can work indoors and in some outdoor areas.

Wet-rated ceiling fans can withstand more than the other two. A wet-rated fan is a true outdoor fan.

They can handle intense rain, ice, and snow. If you live near water, it can also tolerate the salty breeze from the ocean. For this reason, people would recommend these for areas like an exposed deck, lanai, gazebo, veranda, etc.

Outdoor ceiling fans are manufactured with outdoor conditions in mind. For this reason, their blades can withstand more stress. They use special plastics that can prevent warping. The blades are known as all-weather blades. They're typically bigger than indoor ceiling fan blades.

In addition, the hardware comes from galvanized steel. It's steel with a galvanized coating that provides a physical barrier. This way, the underlying steel won't be exposed to atmospheric conditions.

The coatings stop corrosion and rust. Crucial components like the motor are encased and sealed for water protection. It's as sturdy as it can be.

Can You Use Outdoor Ceiling Fans Indoors?

Now we know the capabilities of each type of ceiling fan. As we can see, the outdoor variation can handle more stress than the indoor kind. Indoor conditions aren't as harsh as outdoor conditions.

The only limiting factor would be the cost and size. Outdoor ceiling fans will cost more than fans strictly for indoor use. Of course, some may be too big for a room.

Should You Use Outdoor Ceiling Fans Indoors?

Whether you should use an outdoor ceiling fan indoors is a matter of preference. It also depends on your environmental conditions. If you live in an area with harsh damp weather, it would be better to use damp-rated outdoor ceiling fans in your home.

Wet-rated ceiling fans would also do well inside. You should go for it if you don't mind the cost. In any case, it opens up more options when you're searching for a new ceiling fan to install.

It's also essential to think about the conditions of the room you will put it in. For example, basements tend to be more humid than other rooms. In this area, you should use an outdoor ceiling fan.

The same reasoning goes for rooms like the bathroom or kitchen. These rooms tend to have more moisture. Therefore, you should install a fan that can handle those conditions. 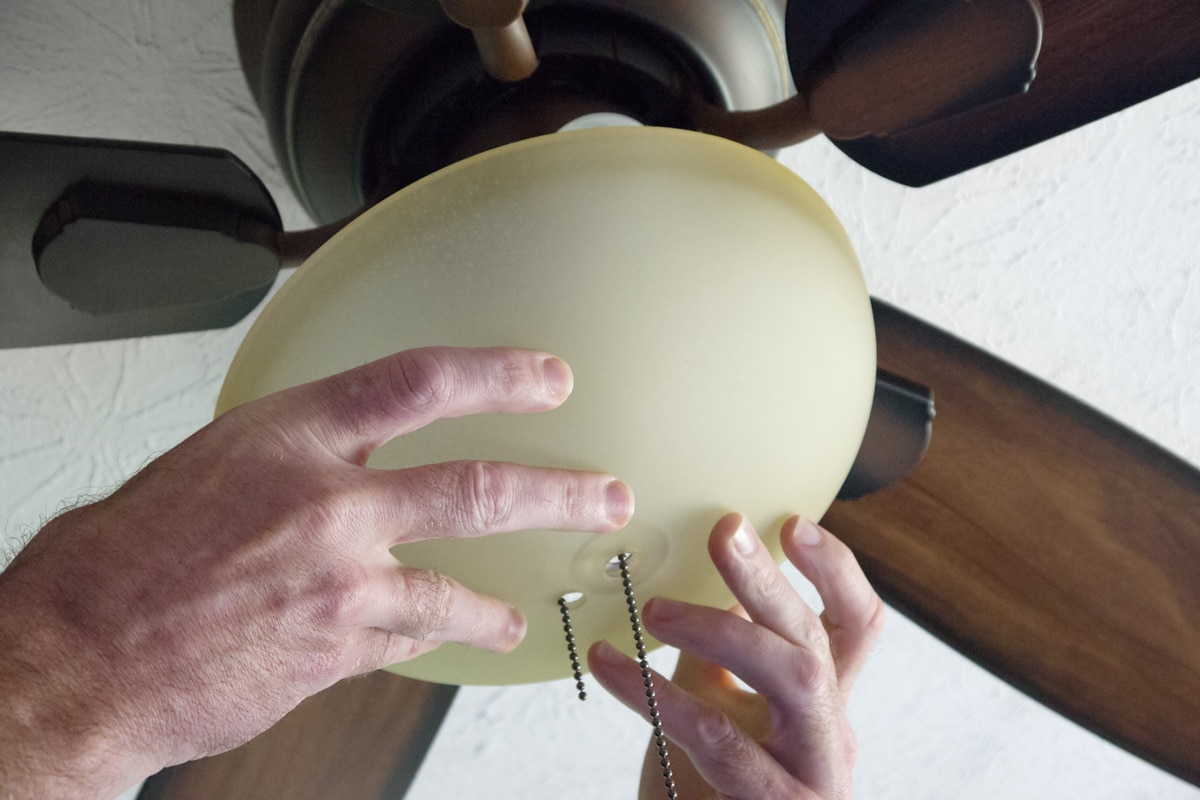 Before installing the fan, ensure all the necessary parts are included in the packaging. Turn off the power to the area too.

Afterward, you can install the mounting bracket to the junction. Then, mount the fan body to it. Follow that up by making the correct wire connections.

Attach the blades to the motor housing. Lastly, secure all the screws. Before you finish the job, test the fan on the highest speed setting. You may need to balance it if it wobbles or produces weird sounds.

Can Indoor Ceiling Fans Be Used On A Covered Porch? 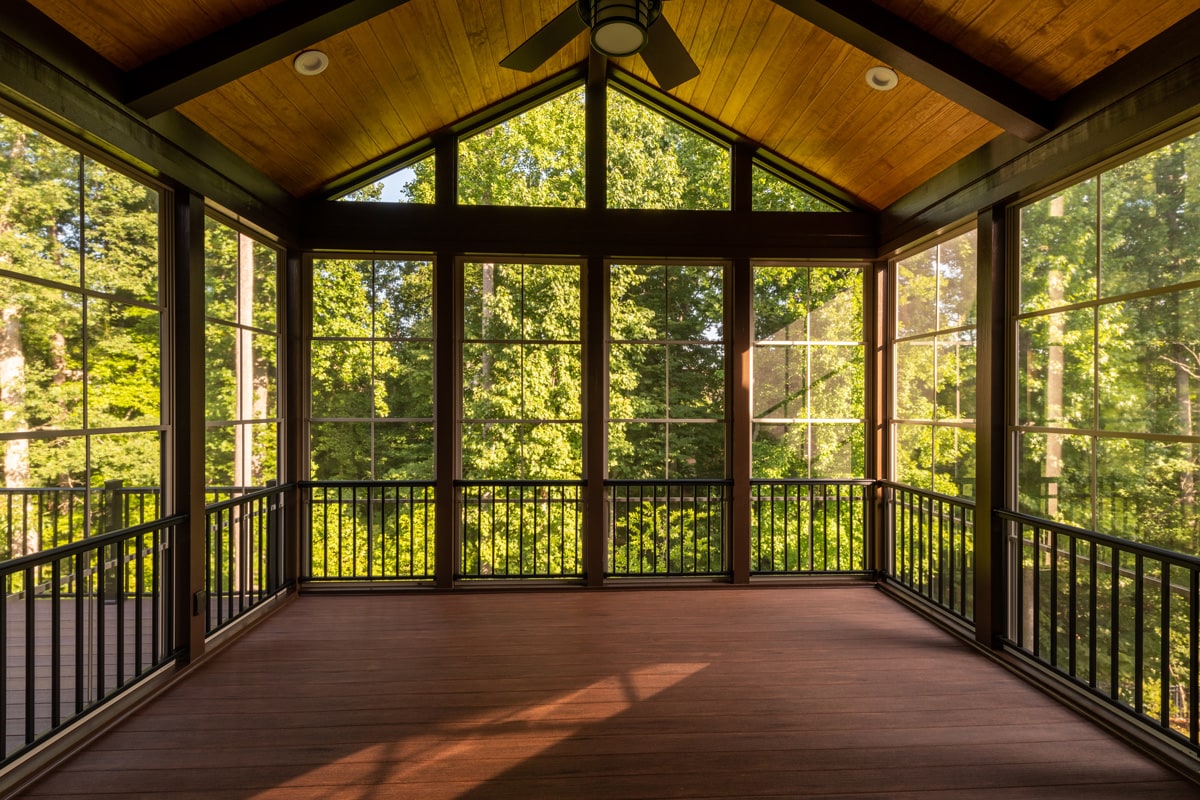 Covered porches have decent protection against the elements. So, would an indoor ceiling fan do well in this area? Unfortunately, that isn't the case.

Manufacturers make them for indoor use only. You can try to use them outdoors, but even a minuscule amount of moisture will harm them. That's not to mention the weather. Even if it doesn't get hit by rain, snow, or ice, the blades can still warp.

The better choice for a covered porch would be a damp-rated or a wet-rated ceiling fan. It all depends on the amount of rain you experience.

Places like Florida get heavy rain frequently. With high winds, the fan is likely to get hit with rainwater. In these regions, a wet-rated ceiling fan would do best for the covered porch.

What Happens If Your Ceiling Fan Is Too Big? 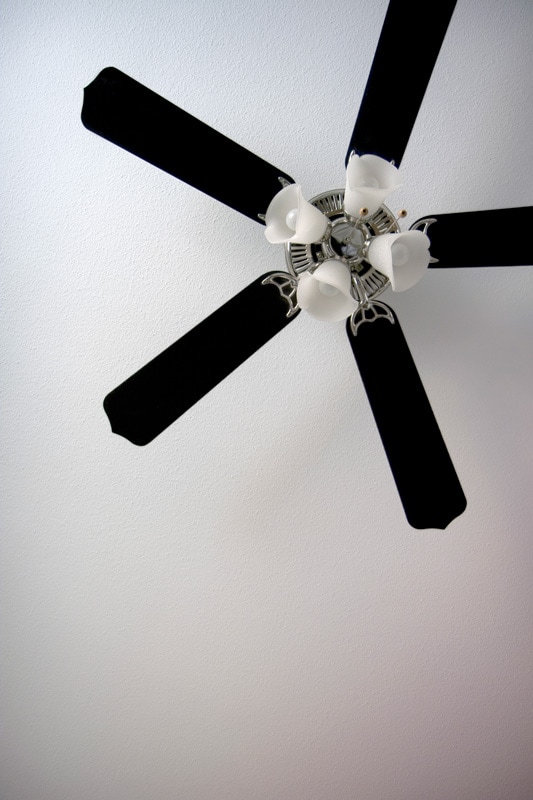 Another crucial factor for choosing the right ceiling fan is size. Once you start looking for an outdoor ceiling fan, it's time to plan according to your needs. You don't want to pick the largest size available.

Ceiling fans that are too big will put some strain on the ceiling. On the other hand, one that is too small won't circulate air properly. If you plan to install the ceiling fan in a large room, consider getting multiple to provide enough air circulation to the room.

In any case, here's a general guideline to follow when choosing ceiling fan size:

How Many Blades Should An Outdoor Ceiling Fan Have?

If you pay attention to detail, you'll notice ceiling fans have more or fewer blades. Some have three, while others have five. How many of them should an outdoor ceiling fan have?

Outdoor conditions are tougher to battle against than those indoors. So, you would need a fan with good airflow and cooling ability. Blades play a part in this.

As you can guess, each blade adds weight to the fan. The more it has, the more stress it can put on the motor. For this reason, three is the more efficient choice. Fewer blades mean faster turns.

In addition, it requires less energy to rotate. For this reason, you'd typically see an outdoor ceiling fan having three blades. However, that doesn't mean you won't find variations with four or five of them.

The fans with more blades are quieter to operate. They introduce a good mix of airflow and low ambient noise. Any outdoor ceiling fans you plan to use indoors should use more blades.

The difference between four and five blades is a matter of preference. They're both quieter to operate than a three-bladed fan. In this case, choose one that fits your home's decor. 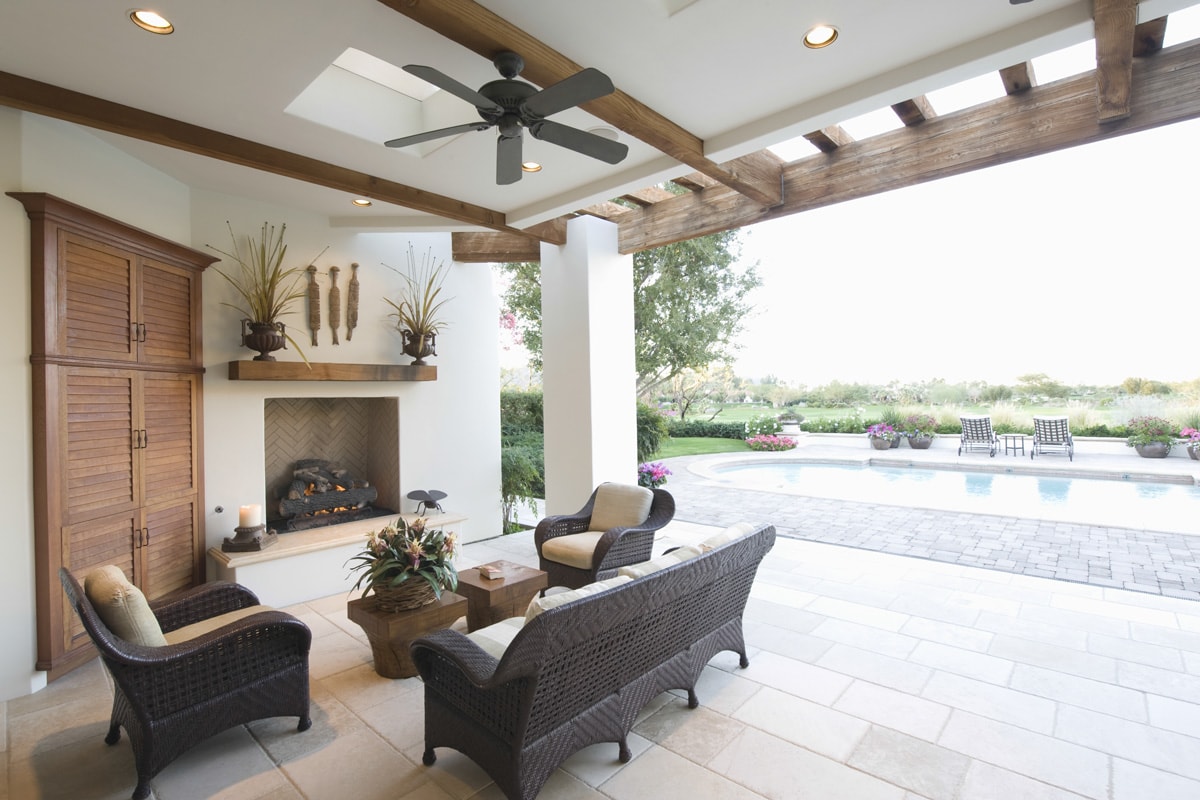 Variation is usually a good thing. It gives us more options to choose from. But it also tends to confuse us more than help. As we've learned, it's possible to use an outdoor ceiling fan indoors. We hope you found this informative.

Before you go, do you have other ceiling fan concerns? Are you purchasing one for a bedroom? We can offer some advice. To learn more, check out:

Are you purchasing multiple ceiling fans? Matching or varying the styles is a factor to consider before buying. To learn more, check out:

Should Ceiling Fans Match Throughout The House?

Amana Air Conditioner Won’t Turn On – What To Do?

How Long Do Trane Furnaces Last?

When Does A Heat Pump Switch To Emergency Heat?

How Much Propane Does An RV Furnace Use?

How To Winterize A Hayward Pool Heater