If you notice that your generator has an overspeed fault, you may wonder about the cause and how to fix it. Fortunately, we have done some research for you, and here is what we found.

Generator overspeed fault could be a result of the following:

It is advisable to tackle the problem as soon as possible, so it doesn't get worse. Keep reading to get detailed information on how to deal with generator overspeed fault. 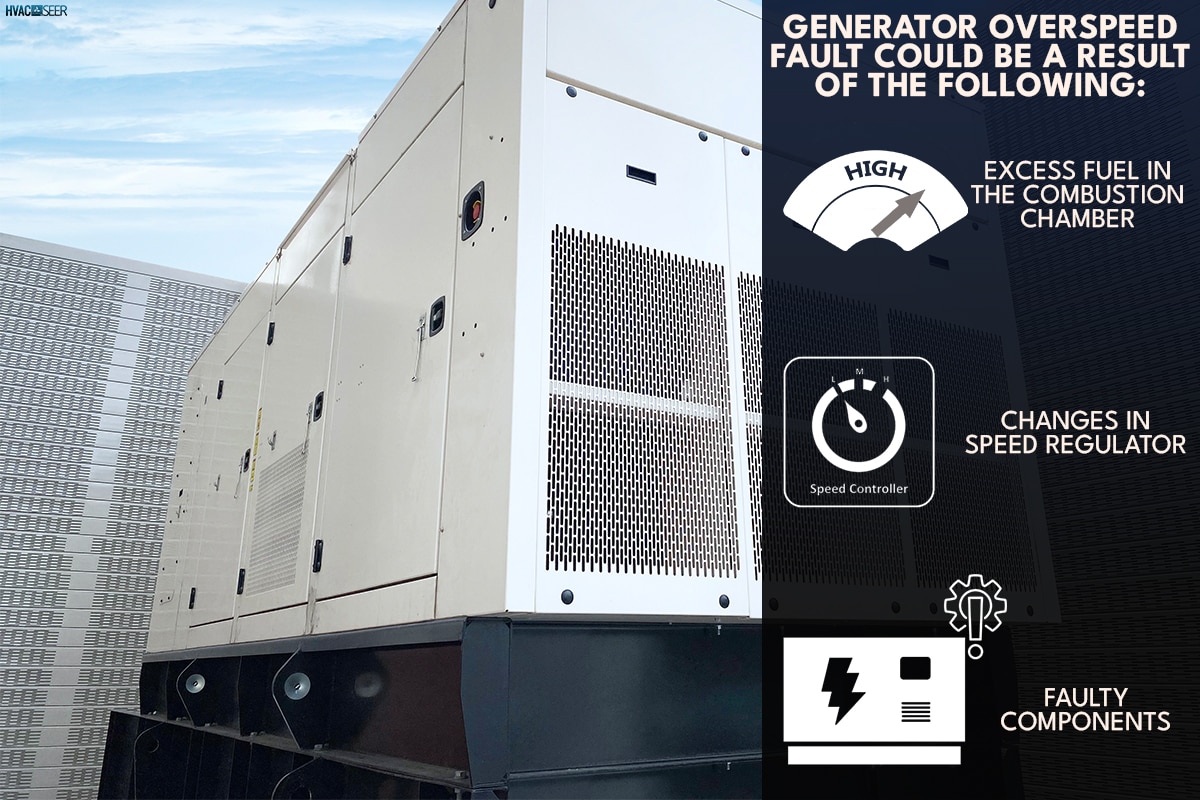 What Causes A Generator Overspeed Fault?

The phenomenon known as overspeed occurs when an engine is compelled to turn faster than it should. 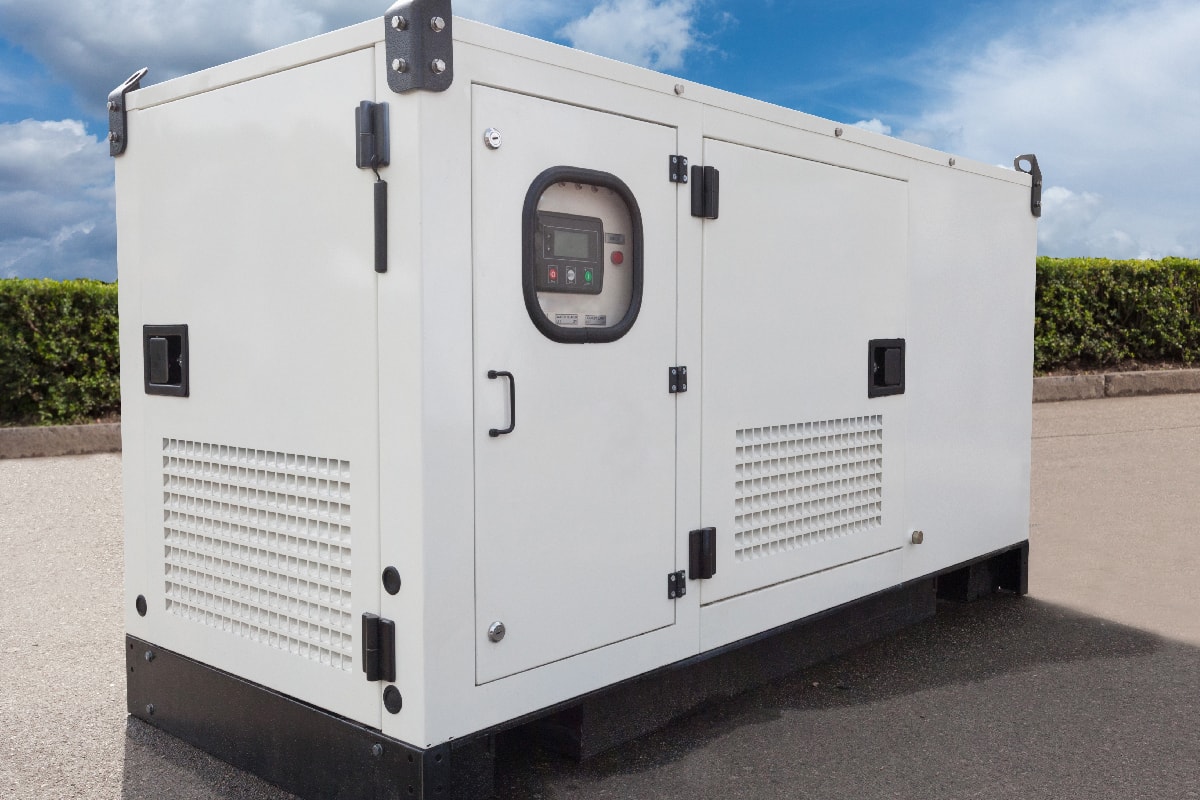 Over speed in a generator can be seen as any speed above the manufacturer's recommended operating range. Over speed frequently causes severe harm to the engines of generators.

The following are common causes of  generator overspeed:

Excess Fuel In The Combustion Chamber

Normally, you want your generator to be full to guarantee steady power, but a high engine oil level also increases the risk of a generator over speeding.

This is because the extra oil will burn in the combustion chamber, speeding up the pistons and perhaps resulting in over speed.

Most generators, if not all, are built with correct speed limits, which are built into the system, although this does not guarantee that they work effectively.

There might be a great deal of damage if the regulator makes a mistake and changes or modifies its speed regulations.

When power is delivered without or with a light load, most uncontrolled engines will overspeed.

Like any piece of machinery, practically every machine component is made to perform and function together. Due to this, any potential component failure in any of the parts might affect and may cause overspeed.

Issues associated with the fuel injection pump, and the accelerator pull rod, are a few of the more prominent problems.

What Should I Do If My Generator Overspeeds?

When an engine overspeeds, the following actions should be taken right away to tackle the problem:

If you notice that your generator is overspeeding, you should check the speed regulator. If it is already faulty, make sure to fix it, as this may stop the overspeeding.

The generator may overspeed if the governor is not correctly set. Look for any air intake or exhaust limits if the generator is still running too quickly.

These limitations may make the engine work harder and operate more quickly. Clean the air intake and exhaust, and remove any obstructions. If the generator is still running too fast, the engine might have a problem.

Another thing you can do is check the load your generator is carrying. If it is too much, reduce and power designated appliances. If the generator is overloaded, it may overspeed.

Mechanical trips usually function like a raking system, where several parts cooperate to slow down and prevent the pistons or turbines of the generator from operating. This will aid in tackling an overspeeding generator.

Since they operate automatically without requiring human intervention, electrical trips are likely the most often used trips for most modern diesel generators.

It does this by comparing the set value, which is frequently 10% over the rated speed, versus the detected value.

Then it will register if an over speed has already taken place. So, the generator will automatically stop running at this point and start slowing down. You can also contact a professional to assist you in resolving the issue.

How Do You Test An Overspeed Generator?

To test for over speed on your Generator, kindly adhere to the following steps:

Step 1: Change The Generator's power Switch To On

Set the choke of the generator to Start. After that, try turning the generator's key to the On position. If your generator has a recoil cord, pull it so the engine will come on.

Change the voltmeter's dial from the Off position to the "AC Voltage Test" position. If you are unsure which setting is the AC voltage testing setting, refer to the voltmeter's manufacturer's instructions.

Step 2: Connect The Voltmeter To The Generator 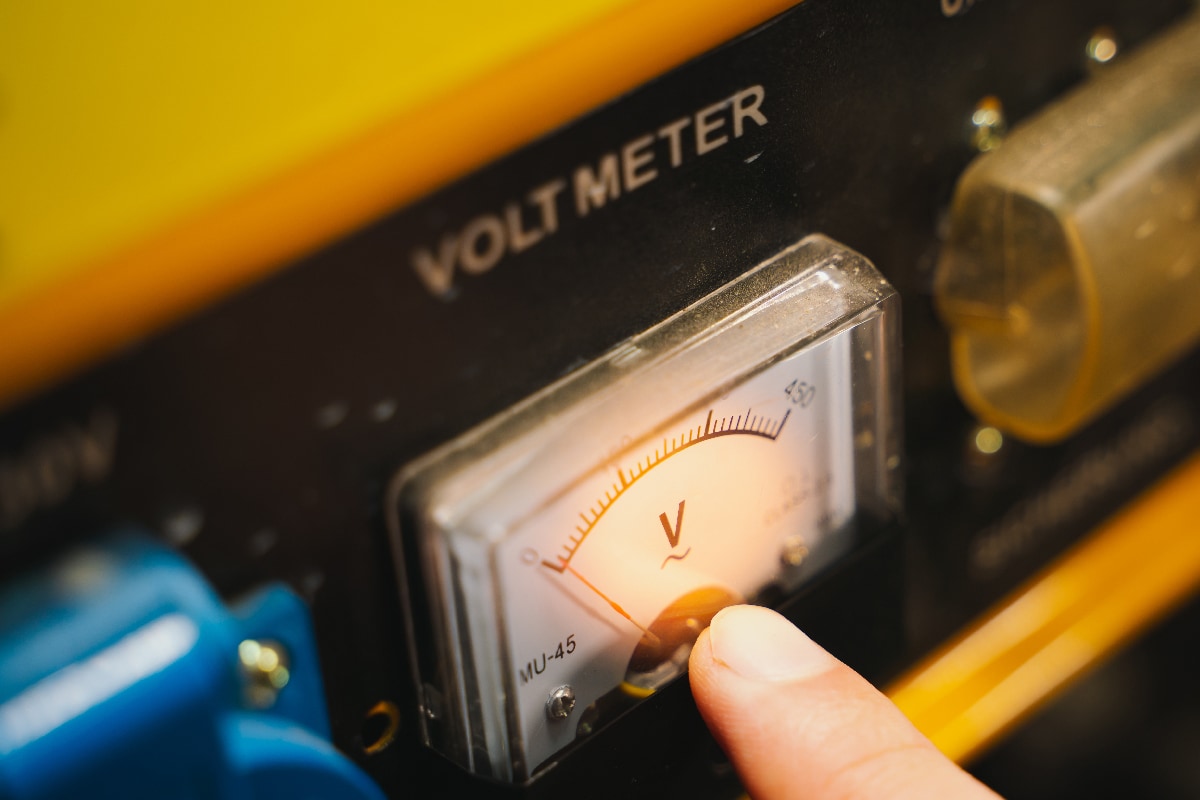 Use the alligator clip on the cable's other end to attach it to any part of the generator's frame after inserting the black cable that came with the voltmeter into the voltmeter's black socket.

This will ground it to prevent electrical wires and other components from being harmed by any sudden power surges.

To read the voltage, insert the metal tip at the end of the red cable into the output plug of the generator after inserting the red cable's red socket into the voltmeter.

Depending on the voltage, the generator may have different output plug outlets. The outlets can appear different but will be named. Both of them can be tested in the same manner.

Step 3: Carry Out The Test

Turn up the engine speed when there is no load on it. At 115% of the speed limit, an overspeeding journey will shut off the fuel supply.

Step 4: Turn Off The Generator

How Does Overspeed Affect A Generator? 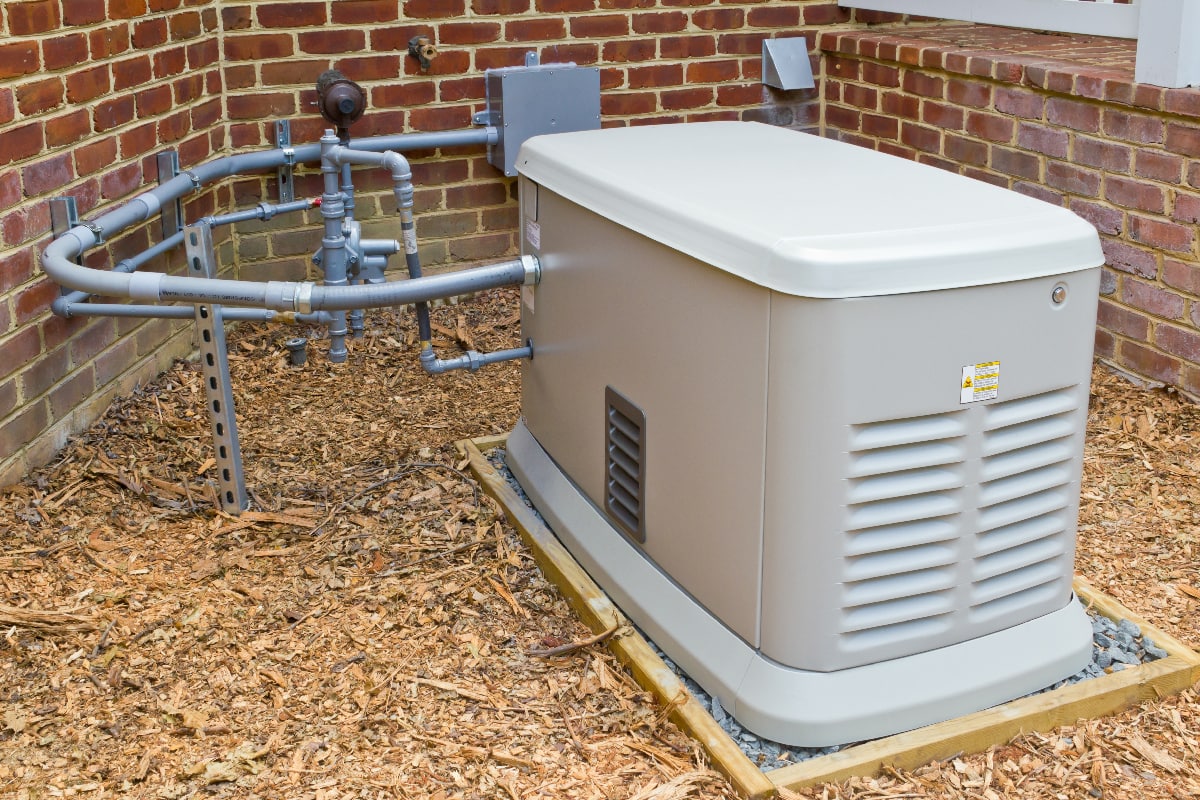 Typically, an engine's speed is expressed in revolutions per minute [rpm].

It is important to note that the effects of operating an engine too quickly vary depending on the kind and model of the engine and are influenced by several variables; the length of the overspeed and the speed reached seem to be the most vital.

Momentary overspeed with some engines can lead to significantly shorter engine life or catastrophic failure.

Since every component of a machine is made to function together, any potential component failure in any of the parts might affect the other parts.

Leaving an overspeed fault unresolved for an extended period can damage the engine block, conn rod, crankshaft, bearings, and the generator at large.

Can You Test The Overspeed Trip Of A Generator?

Yes, it is possible to test an overspeed trip on a generator. Depending on the generator you are testing, you can use either a combination of mechanical, electronic, or any. For a generator set with electronic control, it is the easiest to check.

Testing The Overspeed Trip Of A Generator

Usually, you can enter the controller menu and look for a test mode.

Usually, this involves decreasing the over speed set point so that when you start the generator, its normal operating speed is higher than the over speed test trip set point, causing the unit to alarm and immediately shut down.

After that, you can revert the overspeed set point to its default value for everyday use by going back to the menu. Some systems offer a straightforward "over speed shutdown test" key switch or button that can be pressed.

The typical method for systems with mechanical trips is to gradually increase the speed set point until the engine speed exceeds the designated overspeed setpoint. At this point, the engine shuts down.

In each of these scenarios, you should be aware of the exact overspeed setting, which is often around 5 percent over the normal operating speed, and take care not to over speed the generator to an unsafe level.

Generally, the generator is not filled throughout the test in each of these situations.

To ensure a safe, harm-free test, you should always be able to locate the equipment's pertinent documentation and follow the manufacturer's instructions. 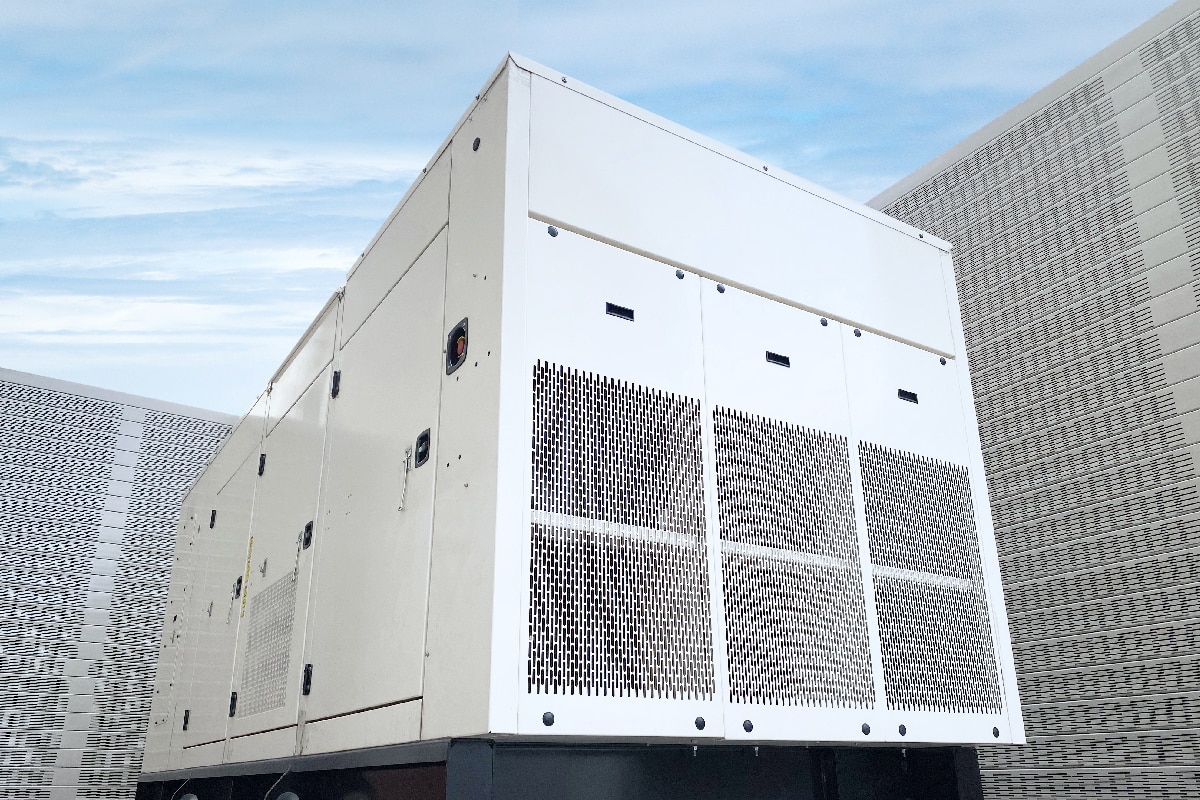 Generator overspeed fault can be caused by different problems, including excess fuel in the combustion chamber, change in speed regulator, and defective components.

To deal with the issue, you must check the speed regulator and load of the generator. You can also implement overspeed strip.

What Size Generator To Run A Heat Pump?

What Size Generator Do I Need To Run A Space Heater?

How Long To Run An Ozone Generator In A Bedroom?

CoolBot Vs. CoolBot Pro: Which To Choose?

How To Insulate Behind Shiplap?

How Close Can An Electric Wall Heater Be To A Bathtub?

What Can I Use To Clean My Dyson Humidifier? [Is Vinegar Ok?]

How To Keep Nest Thermostat From Changing Temperature

How To Reset A Whirlpool Air Conditioner