Ceiling fans are a great way to get proper airflow and cool your room. They are energy efficient. So, it might seem like a good idea to leave them on for long periods. But, can ceiling fans overheat? If that is the question you are wondering, we have researched the issue and found some answers.

While it might not seem capable of overheating, ceiling fans do run the risk of overheating. They operate with an electric motor which can catch on fire in extreme cases. The main factors for overheating are how well you maintain the fans, their age, and what is attached. As long as it is well kept and relatively new, it can operate for long periods.

Of course, there is more to explain than the answer covers. You may want to know how electric motors operate and how to identify if your ceiling fans are old. There is a lot involved when you turn on the ceiling fan. If you would like to find out more, keep reading ahead. 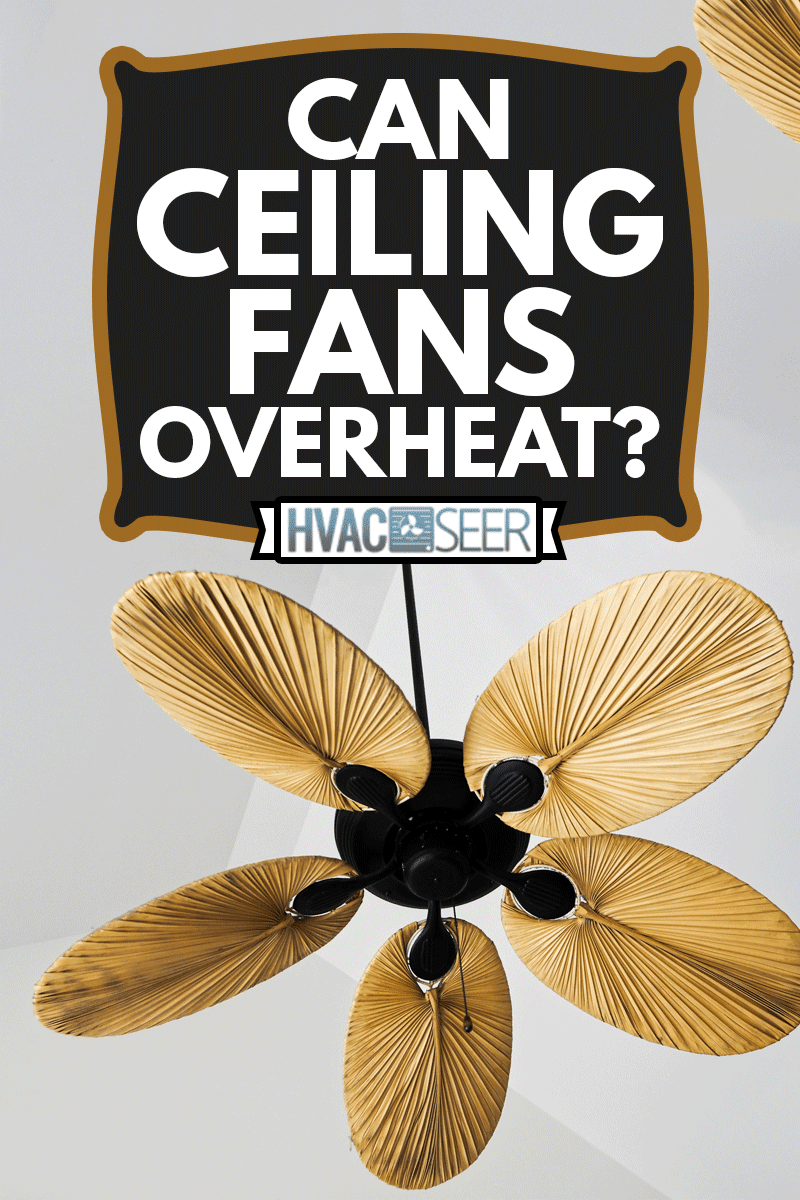 The Parts Of A Ceiling Fan 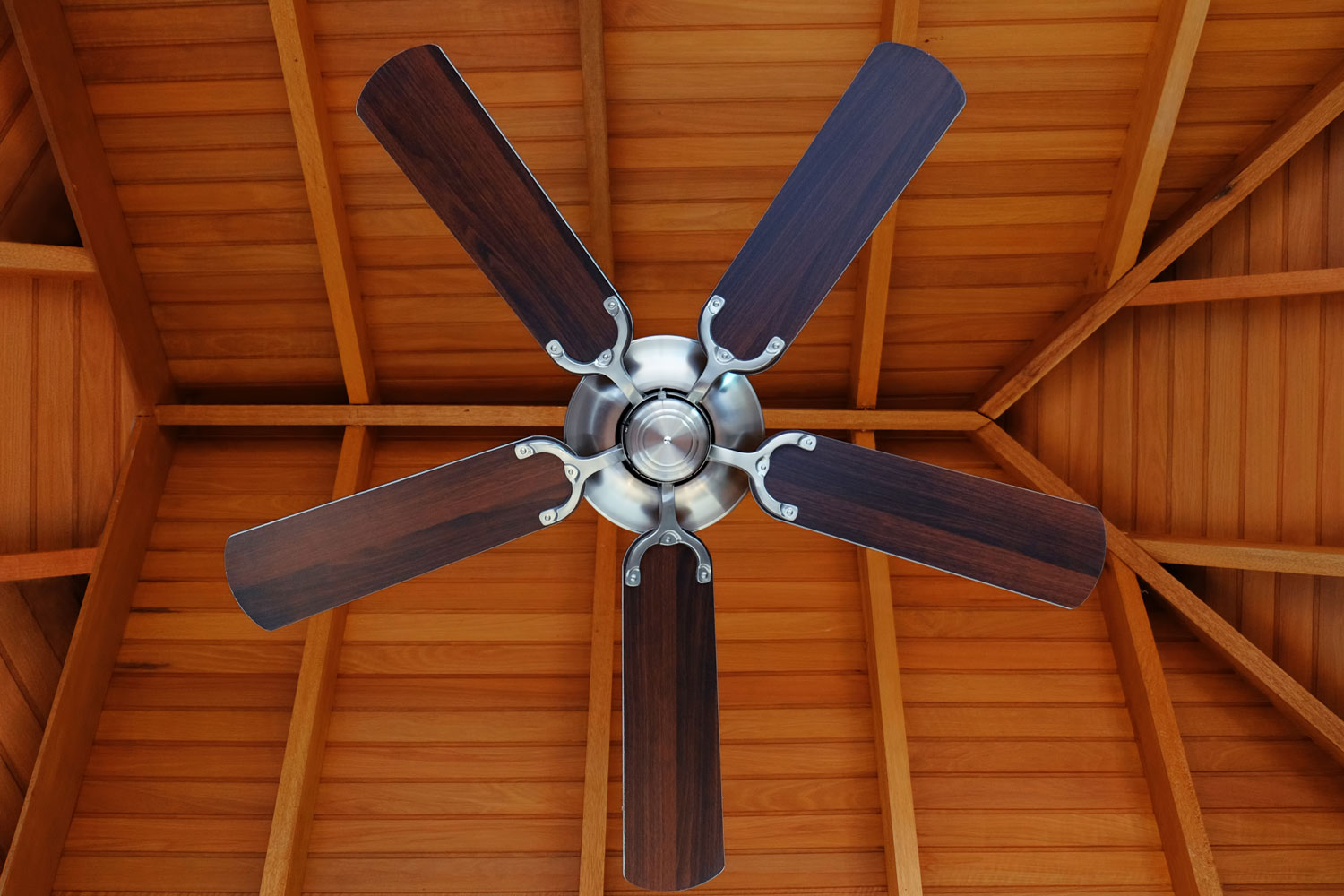 Five parts are essential for a ceiling fan to operate. They are: 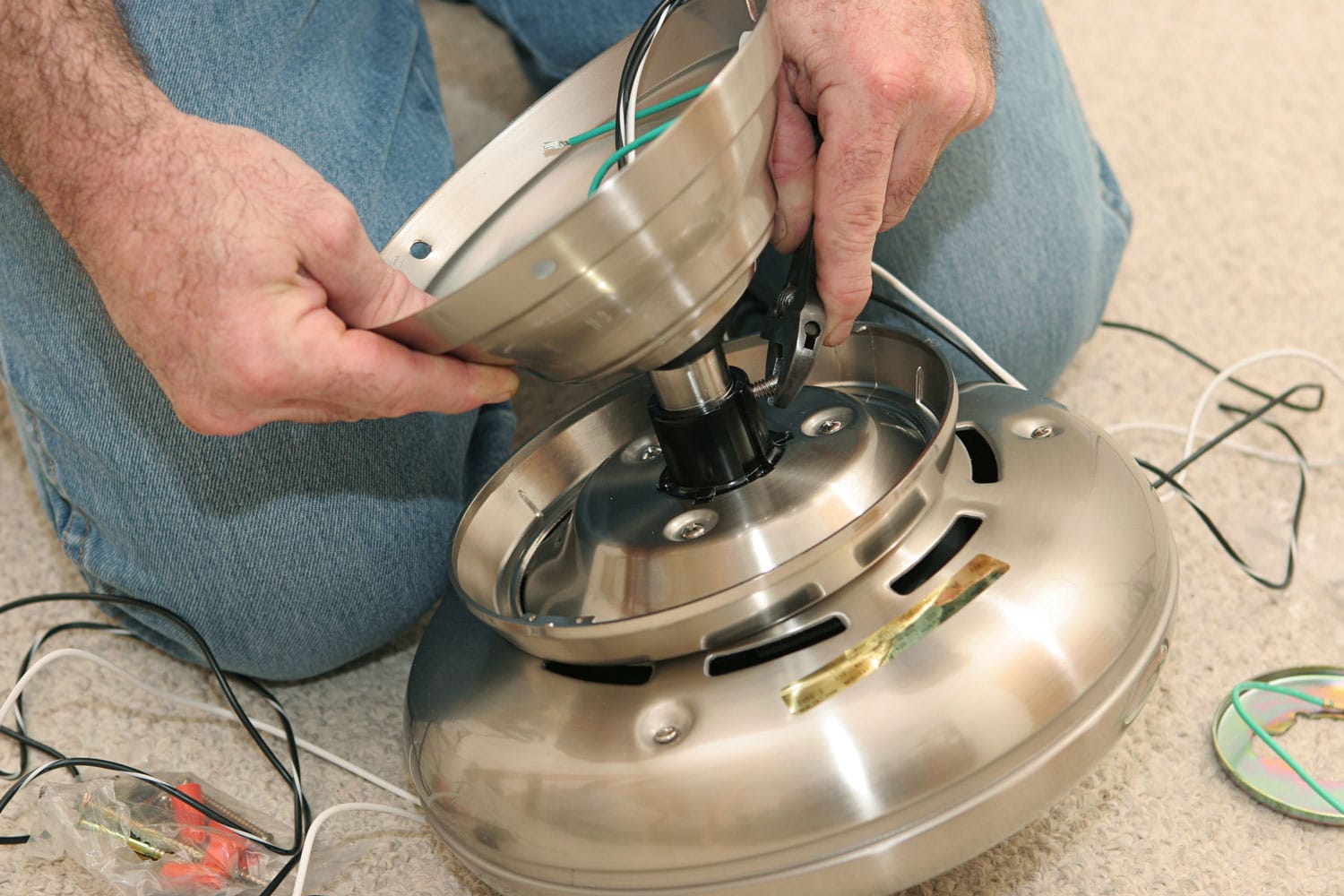 If you are wondering what makes a ceiling fan operate, it is the motor. It houses multiple components which work in conjunction with it to get the fan spinning. Most ceiling fans use single-phase induction motors because they consume a small amount of power. The motor houses wires, rotors, stators, and windings.

The most familiar component is the pull-chain switch. You will constantly come in contact with it to start and control fan speeds. When the switch becomes faulty, there are some factors you should consider before purchasing a replacement. Take caution when wiring the new switch. If not, you risk a fire hazard.

Blades work by circulating air, contrary to the belief it lowers the temperature like an air conditioner. Blades are angled to move more air. Circulation does not depend on the number of blades. The rotation per minute is what will give you good circulation. In other words, the faster the blades spin, the more circulation you will get.

You will notice it needs a new coat of oil once it starts to make noise. Applying a new coat is simple. But, it will depend on the layout of the bearings. Some have a reservoir to put oil inside.  For other ceiling fans, you will have to look for where the ball bearing rests.

The Parts That Cause Overheating 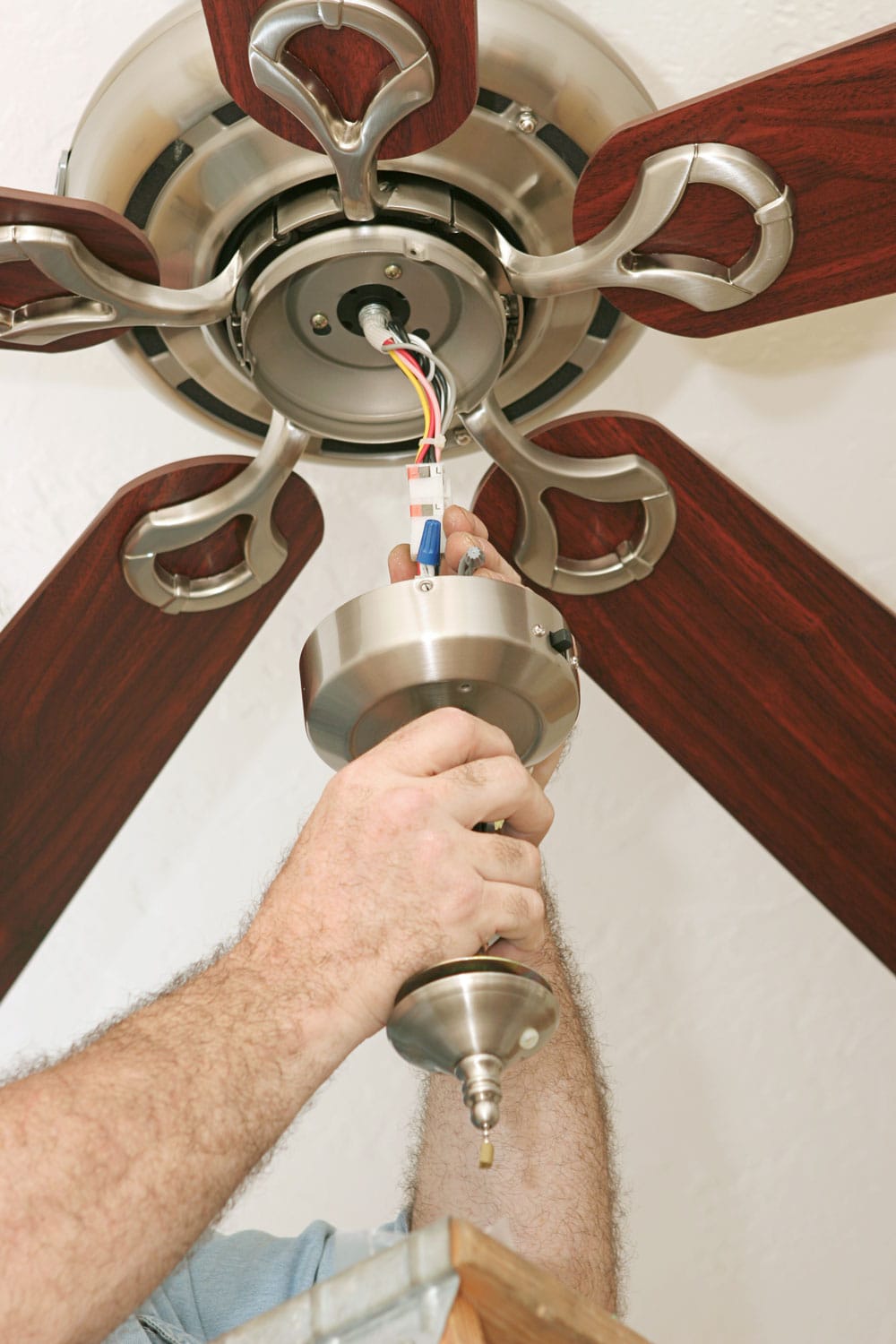 The three components that can cause a ceiling fan to overheat are the motor, blades, and ball bearing. Ceiling fan motors contain the wiring. If you do not wire it correctly, you risk the wires causing a fire. The chances for this to happen increase if the fan has light fixtures.

However, the chances of a fan starting a fire are low. Still, you do not want to leave it up to chance. You can opt to replace your ceiling fan or hire a professional to wire it.

Two components that depend on each other are the blades and bearings. Dust can accumulate on the blades. You can dust it to keep up with maintenance but do not forget to check for dirt buildup on the bearings too. If you do not maintain the bearings, it will have difficulty allowing the fan to spin.

The lack of maintenance causes the motor to overheat. At most, the fan will not perform well. Once you notice your fan slowing down, it might be time to clean up. However, it is best if you clean your ceiling fans once a month to avoid any damages.

Can Ceiling Fans Catch On Fire?

As mentioned, ceiling fans can catch on fire in extreme cases. With proper maintenance and installation, the chance for the fan to ignite on fire is low. If you are going to install new ceiling fans, we would recommend you seek help from professionals. While it might be less expensive to do it yourself, it might not be worth it from the risk of a dodgy connector or loose wire.

Additionally, you would want to maintain all parts of the ceiling fan. While it might seem like dusting is all it takes to take good care of ceiling fans, there is more to it. Some parts require lubrication to continue to operate smoothly. If it is not lubricated, the fan will have to work harder to keep spinning, making the motor heat up more.

The best way to ensure you do not run the risk of fires is to purchase ceiling fans from a reputable brand. If you want to find out if ceiling fans can be a fire hazard, click here.

For How Long Can Ceiling Fans Be Left On?

In general, you should consult with the manufacturer to get the exact details on how well it operates. Some can run for 24 hours a day. Though, one aspect to keep in mind is electricity costs. Fans without light fixtures are cost-effective and energy-efficient. However, ceiling fans with lights can cost you more to operate in the long run.

Is It Detrimental To Keep A Ceiling Fan On 24/7?

During hot days, leaving the ceiling fan on 24/7 is an idea that could cross your mind. After all, would it not be nice to return to a cooled home? There is a slight misconception regarding fans in that ceiling fans do not lower temperature. They do not work like air conditioners.

Why Do Some Ceiling Fans Get Slower Over time?

At some point, your ceiling fan might start to slow down. You might attempt to change the speed. But, it will seem like it is spinning at the same rate. What exactly is going on?

If your ceiling fan is starting to slow down, there are various reasons why it is happening. The first cause is dirt buildup. Since the fan is attached to the ceiling, some may neglect maintenance. At most, people clean off the dust forming on the blades of the fan. 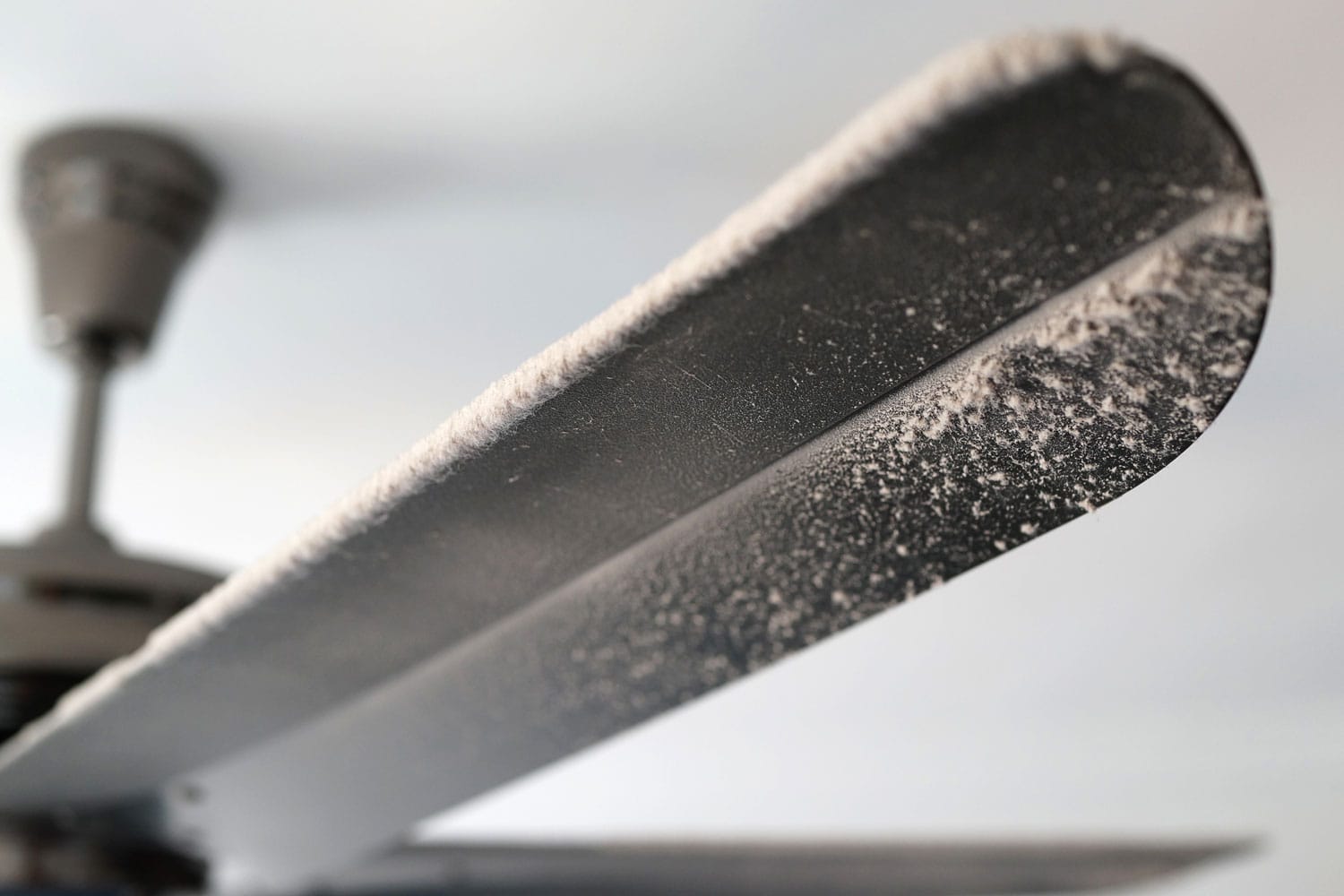 While you dust the blades, some debris may wander into ball bearings. The ball bearing is one component that allows the fan to spin without too much friction. Another cause is a blown-out capacitor. Although, it is not always obvious.

The ceiling fan will still receive enough power to keep spinning. However, it is usually enough to cover the lowest setting. You should first check if the pull switch assembly is the culprit. If it is not, you can narrow down your options to a blown-out capacitor. Both require you to work with the wiring.

On warmer days, we will take any method to cool ourselves. Ceiling fans are a great option. But, like most appliances, there comes a cost to using one. Sometimes, getting some insight into how appliances work can help us take better care of them. We hope you found the information above insightful and informative.

Why Is My Air Conditioner Light Blinking?

Can You Put A Mini Split Condenser In The Basement? [Yes! Here’s What You Should Know!]

Water Dripping From AC Vent In Ceiling—What To Do?

How To Keep Blown Insulation Out Of Soffit Vents?