Smoke detectors save lives by warning household owners about a possible fire within the home. You've probably wondered why your smoke detector has a red blinking light every few seconds. We've researched this topic and here are the possible answers to your question.

Your smoke detector is blinking red every few seconds due to any of the reasons below:

We will get into further details about this topic so you will know the root cause as to why your smoke detector's red light is blinking so keep reading this post until the end to learn more. 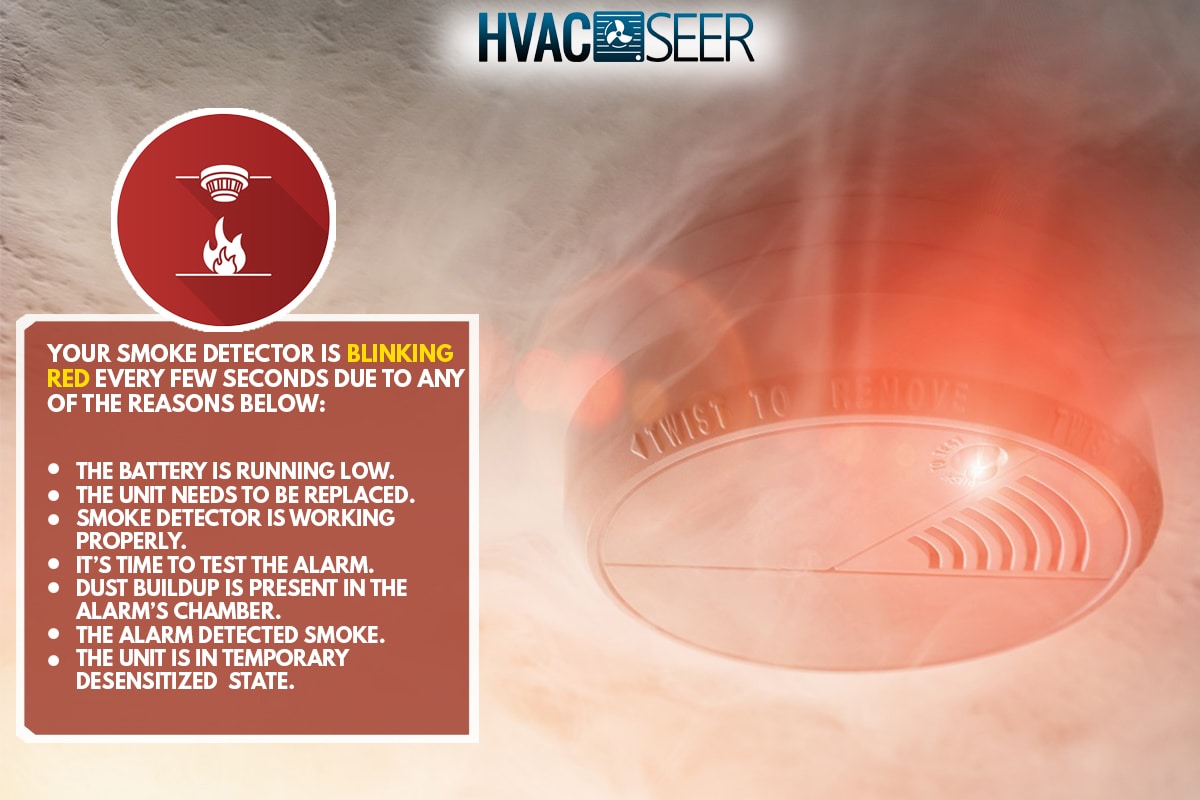 A smoke detector, also known as a fire alarm, is a device that senses smoke and possible fire. It gets triggered through ionization or via photoelectric when an indication of fire is present in the household.

A blinking red light in your smoke detector does not always mean a fire in your home. Here are the possible reasons why the device blinks red every few seconds.

The Battery Is Running Low 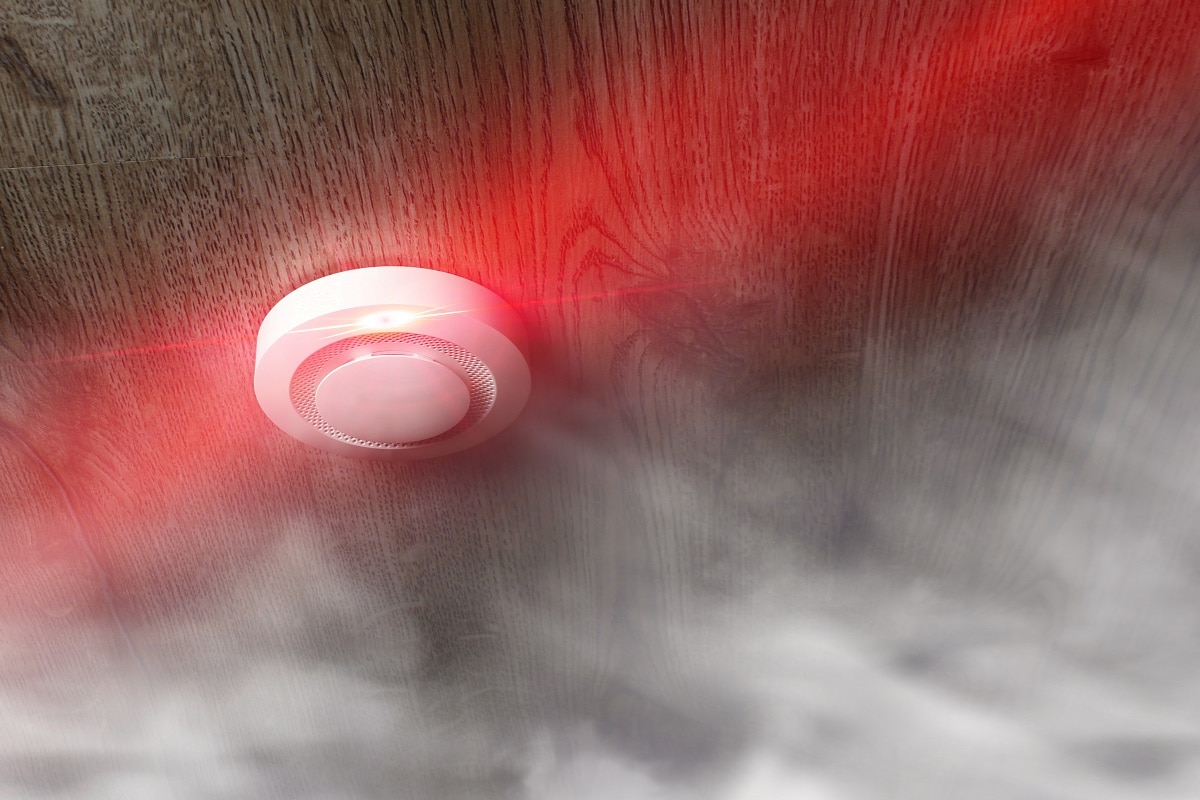 While some smoke detectors use electrical current to work, some depend on 9V or AA batteries. In addition, batteries are used in smoke detectors in case there's a power interruption at home.

When the batteries are running low, you might not get the efficiency you expect from the device. Good thing there's a way to know if it's time for you to change the batteries of your smoke detector.

Manufacturers usually program the smoke detectors to show a blinking red light every 45-60 seconds to tell household owners that the batteries are already low. It is recommended to change the batteries once every 6 months to a year or based on the manufacturer's advice.

Sometimes the device would also make a chirping sound while the red light is blinking. This does not mean smoke is being detected. It's just that the device needs some fresh batteries so the old ones can go straight into the dumpster.

The Unit Needs To Be Replaced

Like any other electronic device, we find essential, smoke detectors have a limited lifespan.

Some smoke detectors have an auditory reminder or a blinking red light, but instead of waiting for the device to tell you that it needs to rest to make space for a brand new unit, you can check the device yourself.

Depending on the manufacturer, smoke detectors can last 5-10 years starting from the manufacturing date. The expiration dates are usually indicated on the device near where the battery is, so make sure that you are checking your unit.

Check out this smoke detector on Amazon.

The Smoke Detector Is Working Properly 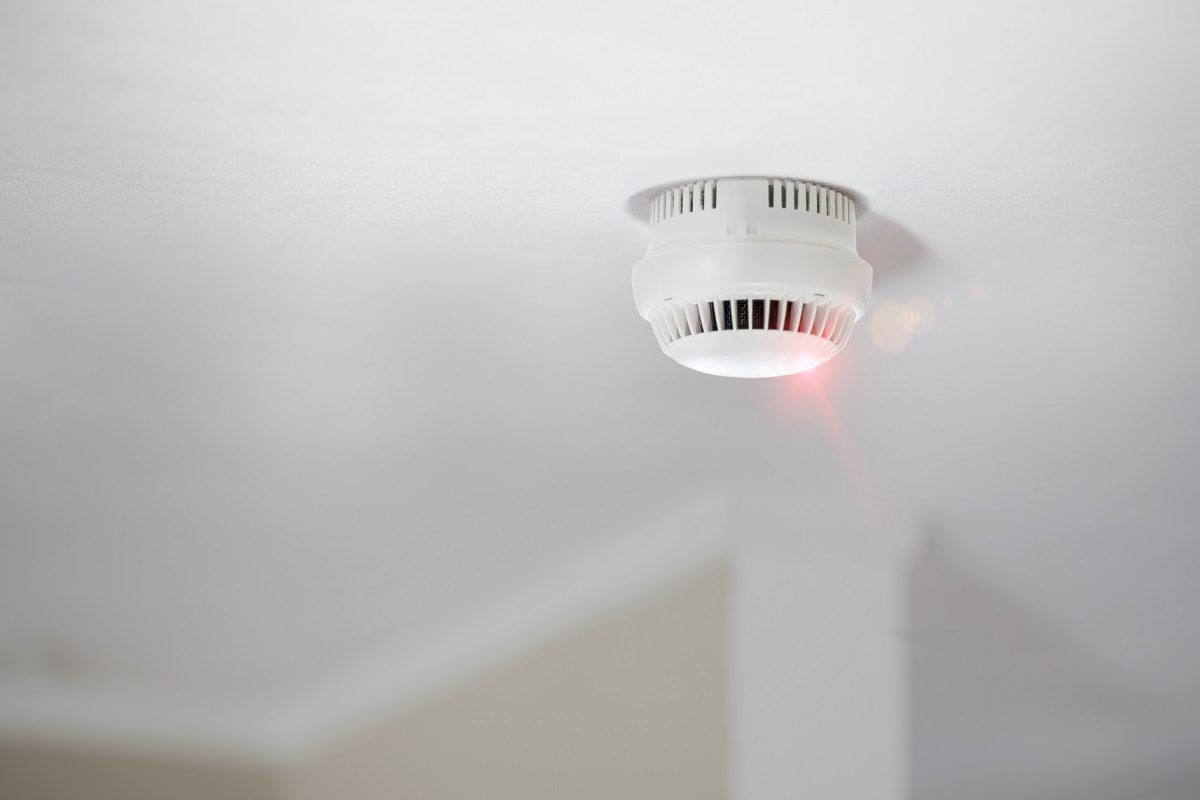 Before you get bothered by the flashing red light in your smoke detector, it is important to check on your manufacturer to know which color they use to indicate that the device is properly working.

Some manufacturers would use green light to indicate that the device is good. A steady blue light might tell you that an elevated carbon dioxide level is present at home.

In most cases, a blinking red light that goes on every few seconds is a sign that the device is in good condition. Almost all manufacturers add this feature to let you know your device is ready to detect smoke and save your life.

It's Time To Test The Alarm

Another reason your smoke detector is flashing a red light is that it is signalling you it's time to test it.

Although it is necessary to test your smoke detector at least once a month, a flashing red light that goes on every few seconds can also indicate that you no longer have to wait a whole month to test the unit.

Most manufacturers include a test button on the device which you can press for five seconds, or until it beeps. Before testing the device, you can ask your family members to go inside a room and shut the doors to know if the smoke detector is loud enough for them to hear its alarm sound even through closed doors.

You can use an aerosol spray made specifically for smoke detector tests. If you don't have one, you can also use real smoke to check if the device can detect it.

See this aerosol spray on Amazon.

Dust Buildup Is Present In The Alarm's Chamber 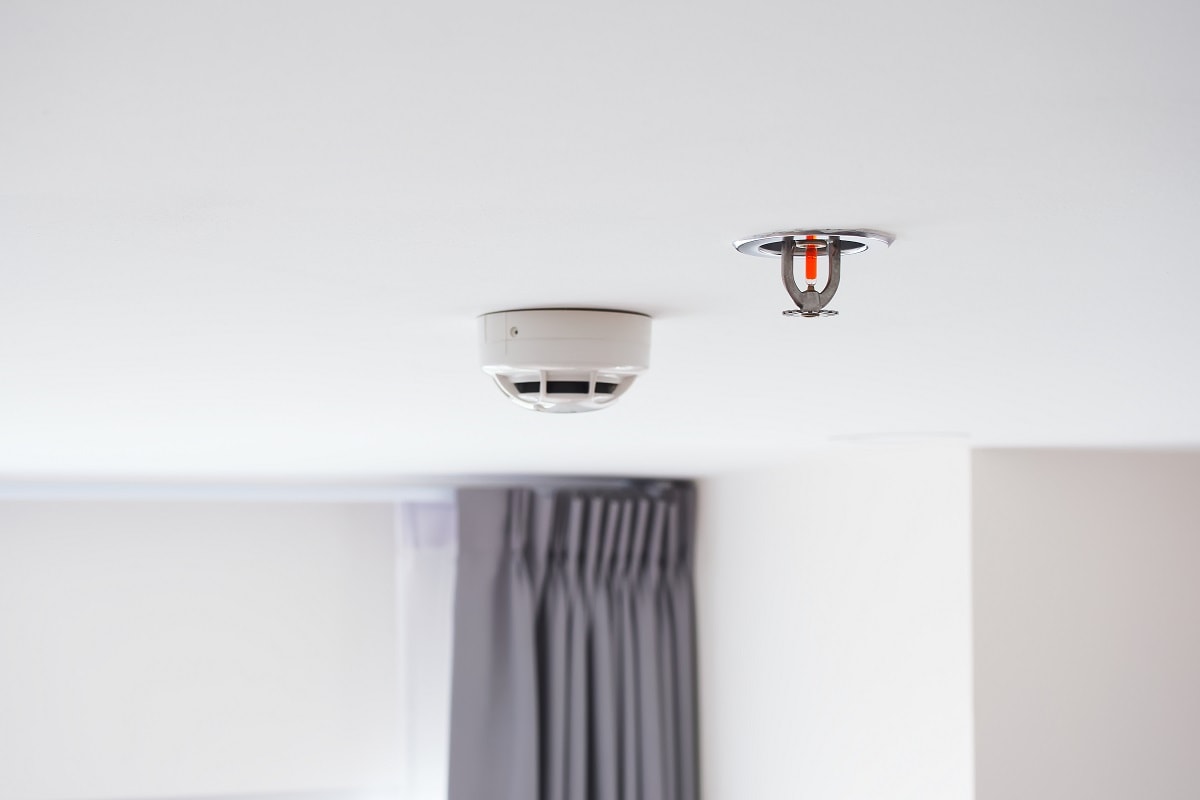 Because smoke detectors can mistake dust for smoke, your device may think that there's smoke present in your home, causing it to flash a red light.

Over time, dust can build up in your smoke detector. That's why regular cleaning is advised to lessens the chances of the device from giving off a false alarm.

To clean the device, remove it from the ceiling and wipe it with a damp cloth. You can also use a small hose connected to your vacuum cleaner to remove dust that's hard to clean using a cloth.

Make sure to remove any cobwebs around the device so they won't hinder the device from working properly. Most manufacturers recommend dusting off your unit at least every 6 months to ensure its efficiency in detecting smoke particles in the air. 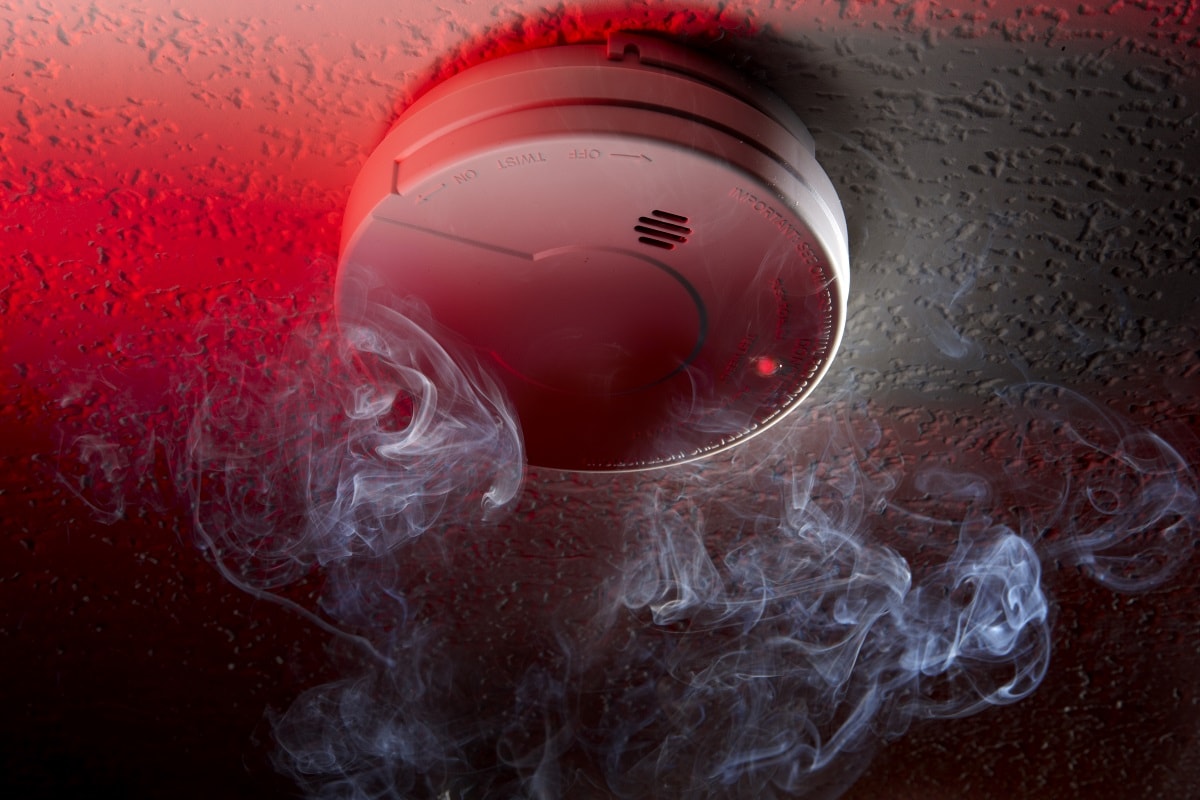 A blinking red light in your smoke detector can also indicate that smoke particles are in the air. It is usually accompanied by a loud noise or a chirping sound to get your attention.

When the smoke detector blinks red, you can investigate your home to see if there's smoke triggering the device. If unintentional smoke is found present at home, make sure to clear it off or call for help if the source is too dangerous for you to handle.

Smoke detectors are designed to save lives, so if you think that your device is blinking red due to possible fire, do not hesitate to reach out to the professionals to avoid making things worse.

The Device Is In A Temporary Desensitized State 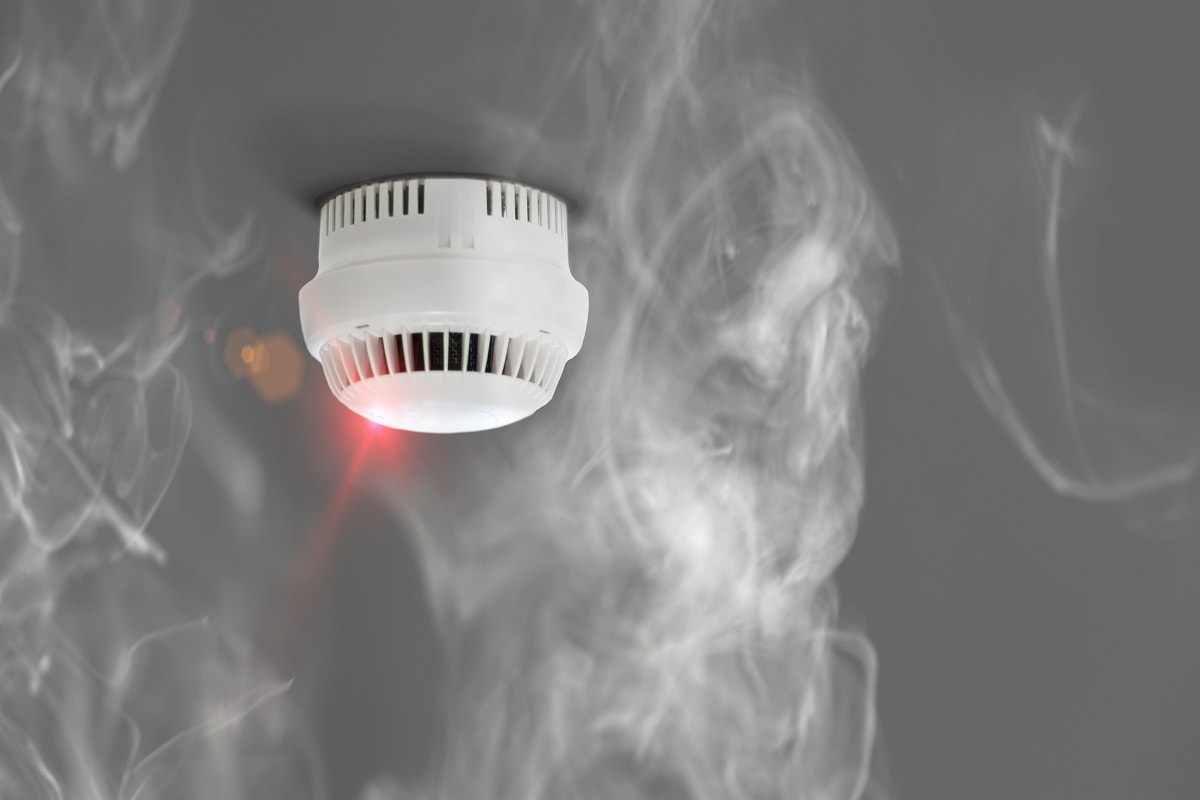 After sensing smoke, the device can continue flashing a red light even after you kill the fire that's causing the smoke. This is because the unit is still picking up the after-effect of the fire.

When the smoke detector is desensitized and the smoke in the air is no longer thick, the sound should go off and the red light should begin flashing to let you know that the device is still working.

You can inspect your home to ensure there is no more fire threat within the household before you reset your smoke detector. To do this,  press the test button for at least five seconds or until the alarm beeps.

Where Should I Mount My Smoke Detector? 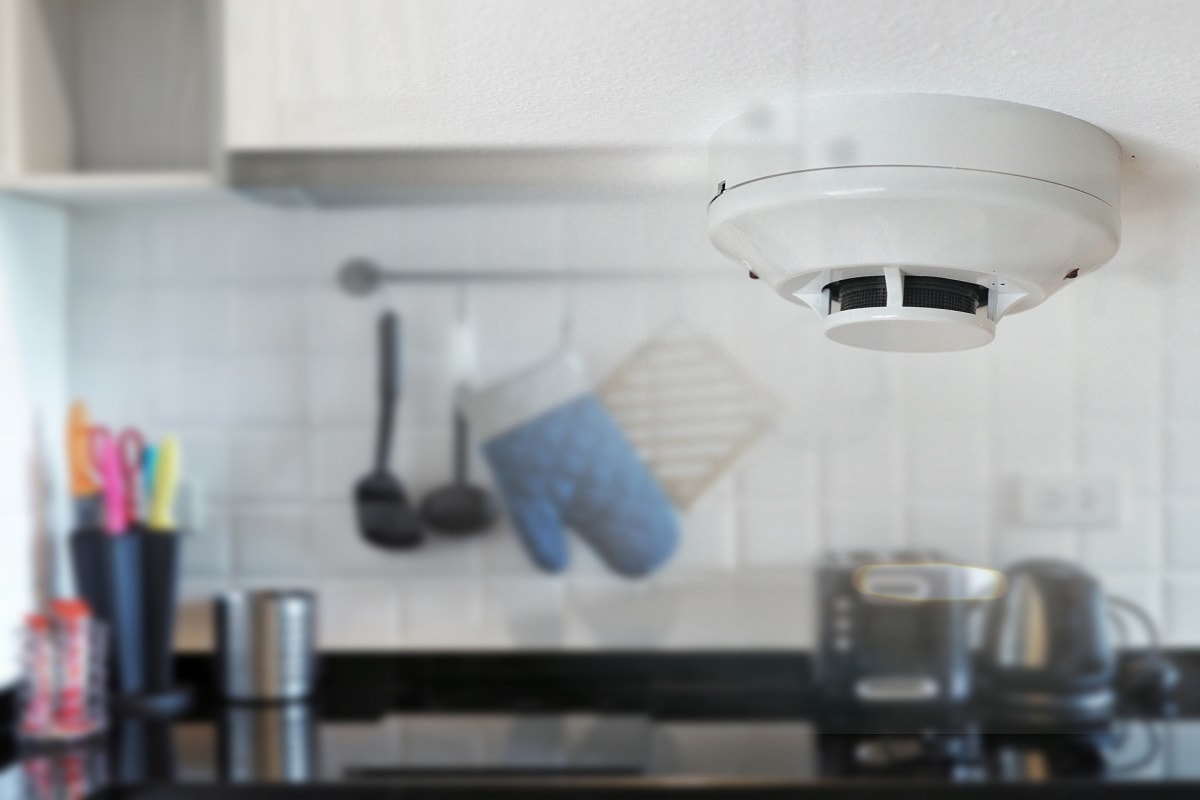 To ensure safety at home, you can install your smoke detectors on the ceiling or the wall in every bedroom, living room, basement, and stairway. The National Fire Protection Association also suggests making sure there is a smoke detector on every level of your house.

A single smoke detector will not be enough when you have multiple floors and rooms at home. In addition, you have to install the device at least 3 meters away from your cooking appliances since it can trigger a false alarm.

When mounting the fire alarm on the wall, the device should not be installed more than 12 inches away from the ceiling since smoke goes up and usually stays at the highest point of your home.

If you are installing the device in the basement, do not mount it on the wall. Instead, install the device at the bottom of the staircase.

Another thing to consider when installing your smoke detectors is the temperature level of certain areas at home. Avoid placing the smoke detectors in dusty, greasy, or rooms that always stay below 40°F or above 100° F. 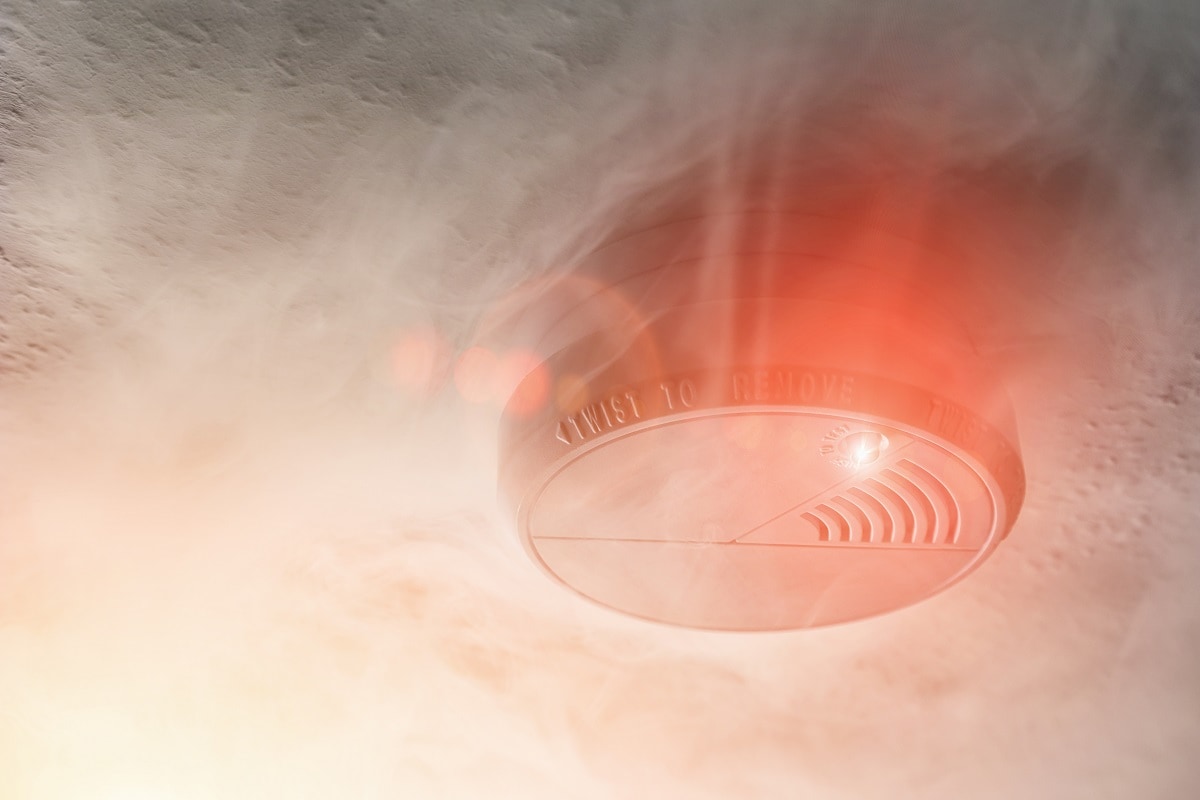 Smoke detectors are essential nowadays to reduce fatality when a fire occurs. A flashing red light doesn't always mean a bad thing. All you have to do is know the other possible reasons for it to avoid panicking when you see your smoke detector blinking red.

Before you go, don't forget to read these posts, too:

How To Turn Off A Radon Alarm

Do Vented Gas Fireplaces Need A Chimney? [Or How Else To Vent Them]

Condensation On Ductwork Between Floors – What To Do?

How To Insulate Hollow Core Doors

How To Adjust The Fan Speed On A Furnace?

At What Temperature Do Pipes Freeze?

Can Foam Insulation Be Installed In Existing Walls?