There are quite a few reasons why a ceiling fan may begin to wobble. This can occur with brand new fans that have just been installed as well as fans that are several years old. So, what are some of the causes and how do you fix this?

A slight movement on your ceiling fan blades is normal while it's in operation. This movement may increase when the fan is set at higher speeds. However, if you notice a significant amount of wobbling when your fan is either on low or high speeds, you may want to investigate the issue, as too much wobbling can pose a safety risk. An unbalanced fan is more often than not caused by unbalanced blades.

Here are the issues that could be causing your ceiling fan to wobble:

In this post, we'll take a closer look at these issues and discuss how to check for them and then fix them. So be sure to stick around and keep reading. 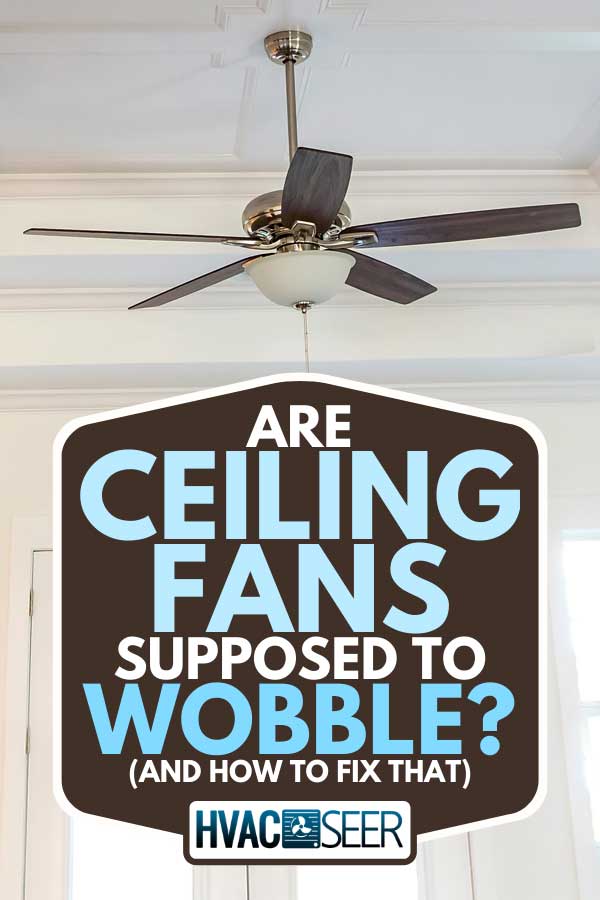 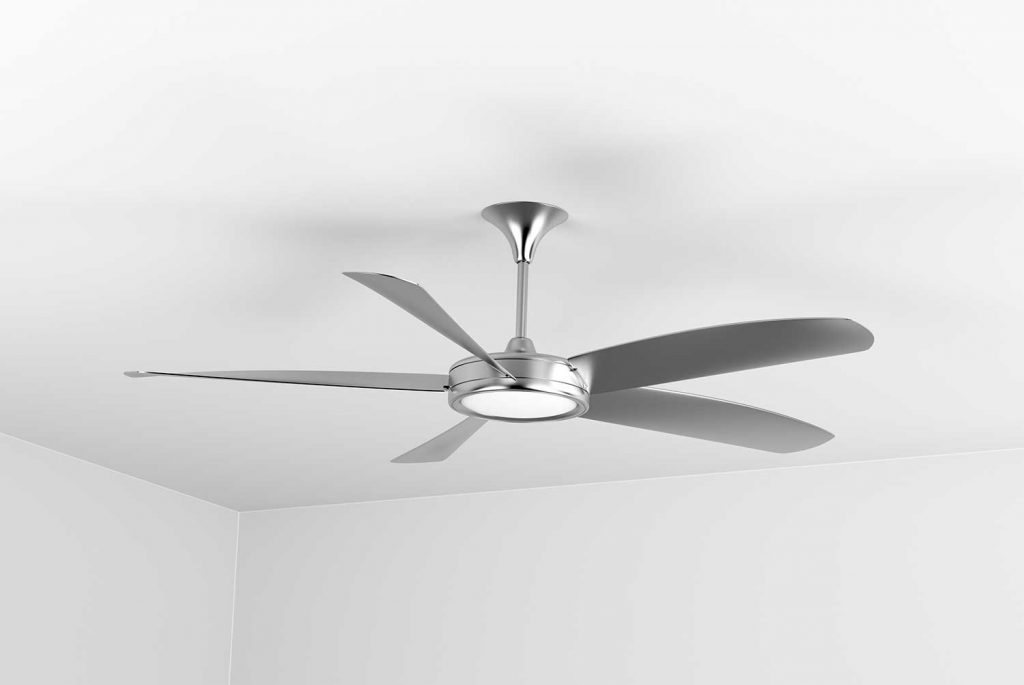 Sometimes a wobbly ceiling fan can be caused simply by a few loose blade screws, which prevents them from rotating correctly. If the screws are not fixed, the blade may eventually fall off--which is why it's imperative to repair the issue as soon as possible.

First, determine if any of the fan's blades have loose screws by grabbing a ladder and physically inspecting each blade. Grab each blade with your hand and move it slightly to check for looseness.

You can also check for blade looseness by measuring the distance between the ceiling and each blade. A properly installed ceiling fan will have blades that are of equal distance from the ceiling. If any of the blades are shorter than the others, it may indicate that the blade is not tightly held by the screws.

If you detect any looseness with the fan's blades, be sure to tighten the screws with a screwdriver. If the screws on all of the blades are tight, then you will need to continue inspecting the fan.

Another common cause of fan wobbling is imbalance from broken blades. This can cause the center weight of the fan to shift in the opposite direction of whichever blade is broken. Surprisingly, broken blades aren't always easy to recognize.

To troubleshoot this issue, start by inspecting the blades while the fan is turned off. Look for any signs of distress or cracks on each blade. You may even need to get a flashlight to closely inspect the top of each blade. If you find any cracks on any of the blades, the blade will need to be replaced to rebalance the fan.

If all of the blades are okay, continue with your inspection.

Blades that have become warped or bent in any way will definitely cause an imbalance in your ceiling fan. Often this is caused by fans located in rooms with humid conditions or simply by everyday usage.

To determine if this is the issue, remove each blade from the fan by unscrewing them and lay them all side by side on a flat surface. Next, take a look at each blade to see if they are all laying flat on the surface. It may also help to place the blades on the edge of a surface to note any gap between the blade and the surface. If there is a gap, then the blade is warped and will need to be replaced to rebalance the fan. 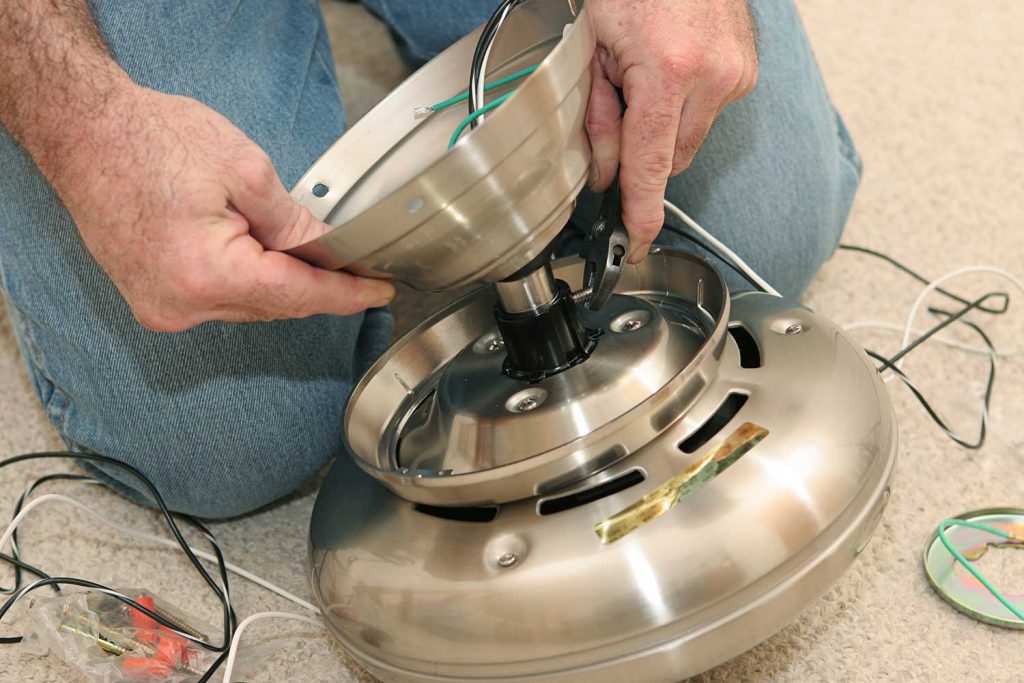 Over time, ceiling fans tend to accumulate dust, both on their blades and inside their motor housing. Believe it or not, the accumulation of dust particles can eventually cause a strain on the motor (especially with older fans). And if the blades are especially dusty, the fan's center of gravity can be thrown off, causing an imbalance.

To fix this, you'll need to wipe down the blades of the fan as well as the outside and inside of the motor housing. It's best to use a dry microfiber cloth when cleaning the fan. You may need to remove the motor housing from the ceiling to clean it.

Check out these microfiber cloths on Amazon.

After cleaning the blades and motor housing, reassemble the fan and power it on. If it is still wobbling, then the next step would be to try a balancing kit.

Use A Balancing Kit

Most ceiling fans come with a balancing kit when you purchase them. You can also purchase them separately. To begin using the kit, remove all of the small weights as well as the plastic clip from the packaging.

Check out this ceiling fan balancing kit on Amazon.

What Causes A Ceiling Fan To Wobble?

There are a few reasons why a ceiling fan may begin to wobble. The most common reasons include loose, warped, or broken fan blades, as well as an accumulation of dust on the surface of the blades or in the fan's motor housing. Below are a few other common reasons for wobbling ceiling fans.

Ceiling fans that have downrods will typically always have a ball socket at the top of it. The ball socket is set inside the fan's hanging bracket. Sometimes with extended use, the ball socket can shift a bit to the side. Whenever this happens, the fan will undoubtedly start to wobble.

Inadequate ceiling support is a common issue with DIY-installed fans. It is important to make sure that the electrical box on your ceiling is sturdy enough to support the size and weight of your ceiling fan. If it doesn't, not only will it cause wobbling, but it can also pose a serious safety risk when the fan is in operation.

An electrical box that is not flush with the ceiling will almost always cause a ceiling fan to wobble. This can be caused by electrical boxes that were simply not installed correctly, have become loose over time, or have screws that have been damaged or have become worn.

How Much Should A Ceiling Fan Wobble?

It's normal for a ceiling fan to have a very slight movement of about an eighth of an inch while it's running at a high setting. If it wobbles more than that, it's a sign that something is off-balance with the fan and it should be inspected as soon as possible.

Why Does The Ceiling Fan Make A Humming Noise?

Most ceiling fan noise is caused by the vibration of its motor. The humming will typically grow louder as the fan is placed on a higher setting.

However, many modern fans come equipped with components that help to mute the amount of humming that normally comes with ceiling fans. However, these components can fail. In which case, you may need to replace the parts or determine the cause of the noise.

If you notice that the fan is making the humming sound at every speed, it could be due to a motor housing that has loose screws. To fix this, locate the motor housing on top of the light kit and give all of the screws a quick twist with your screwdriver.

If you notice that your fan makes a loud humming noise, especially when it's operating at a high speed, the issue could be that the electrical box is not securely screwed in place.

It's especially important to fix this issue as soon as possible as it could pose a serious safety risk. Check the top part of the fan where the electrical box meets the motor housing. Look for any protruding, missing, or loose screws and tighten them as needed.

If your fan has any blades that have become warped or damaged, this can throw the fan off-balance, creating an airy humming noise as it rotates. To fix the imbalance, you will need to take a close look at all of the fan's blades and possibly remove them to find the blade that's causing the imbalance. You can also use a level and set it on top of each blade to determine if there is warping.

Why Is The Ceiling Fan Clicking? [And How To Fix That]

How Many Blades Are Best On A Ceiling Fan?

Testo Vs Fieldpiece: Which Digital Gauge To Choose?

Why Is Air Coming Out Of Vents When AC Is Off?

American Standard Vs. Lennox: Which AC And Furnace To Choose?

Do Humidifiers Cool The Air In A Room?

How To Turn On Ecobee Thermostat After Power Outage