Exhaust fans are great at removing moisture and odor in a bathroom. But, where you position them is optimal to ensure they work best. Many say it's best to put them over a shower, so they can readily remove the excess moisture quickly.

But is this true? And is it safe? We'll ease your worries and questions with the correct answer, so read them all below.

Experts do not recommend placing an exhaust fan directly over a shower. But there's an exemption for this; if the fan is shower-rated and has a Ground Fault Circuit Interrupter [GFCI]. You're good to go if your exhaust fan meets these two requirements.

Do you have more queries about installing your exhaust fan over a shower? More importantly, even though your fan meets the abovementioned requirements, there may still be some differences you may experience after positioning your fan above your shower.

Keep reading to learn everything you need to know to use your fan efficiently.

Is It Safe To Install Exhaust Fans Over A Shower?

There are two conditions your exhaust fan must meet before installing them over a shower.

A shower-rated exhaust fan with a GFCI is the only exhaust suitable to install directly above your shower that ensures protection. If not, you must consider another position for the fan.

Electricity and water shouldn't make contact because it will most likely cause electrocution. Exhaust fans use electricity, and placing them over a shower means they will surely be in touch with water regularly.

That's why it should be shower-rated, as this fan prevents contact between water and electricity.

For further protection, even when a fan is shower rated, it should still be protected by GFCI in case it unavoidably touches with water.

A GFCI detects imbalances in an electrical current usually caused by water contact and automatically cuts off the energy of your device, which in this case, is your exhaust fan.

Check out this exhaust fan on Amazon.

What Happens When You Directly Place Exhaust Fan Over A Shower? 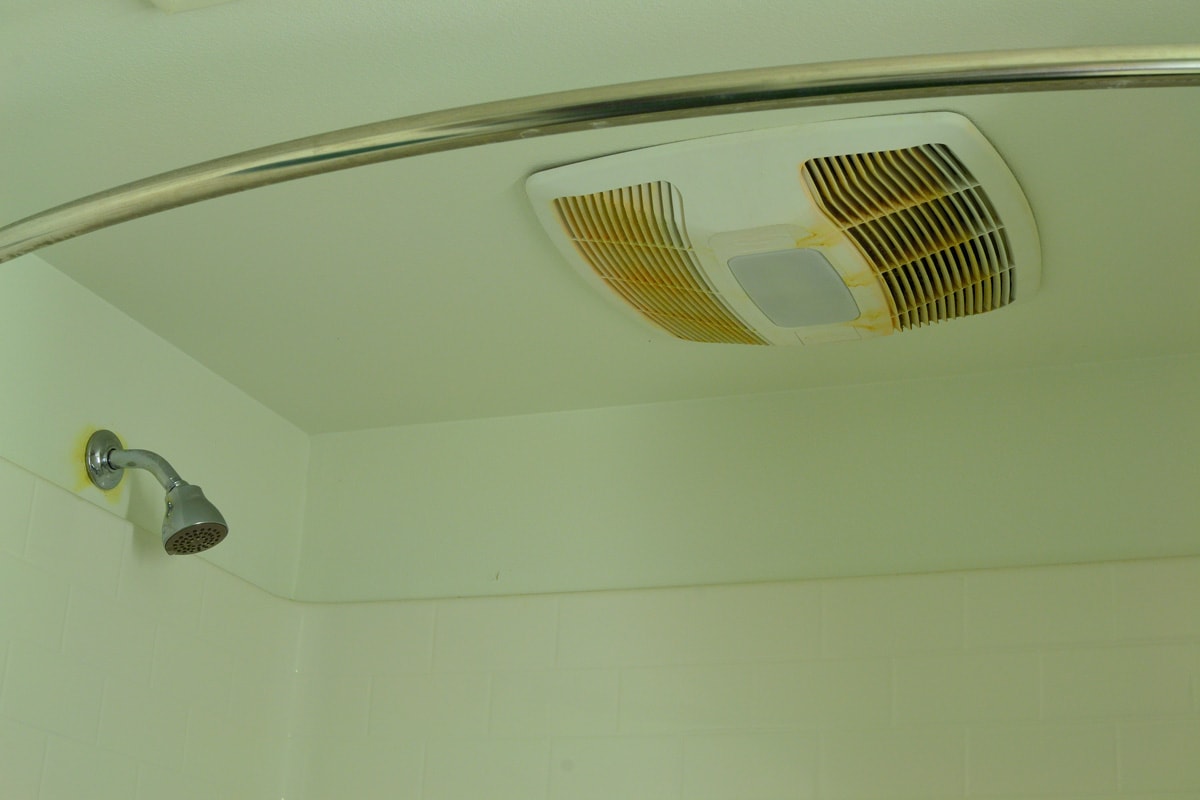 Although you may have determined that you can position an exhaust fan over a shower, you must consider some things. Here are some of the things you may experience if you were to install your fan in this location:

Your shower is where there's most water in your bathroom. Although this means your exhaust will be able to remove the excess moisture from it, it also understandably exposes the fan to water regularly. It will then result in damage and mold infestation over time.

Because the exhaust fan is too close to the steam of your shower, condensation will most probably form. Then, it will drip from the exhaust fan's fascia, which may be bothersome for you.

Where Are The Ideal Locations For Bathroom Exhaust Fans? 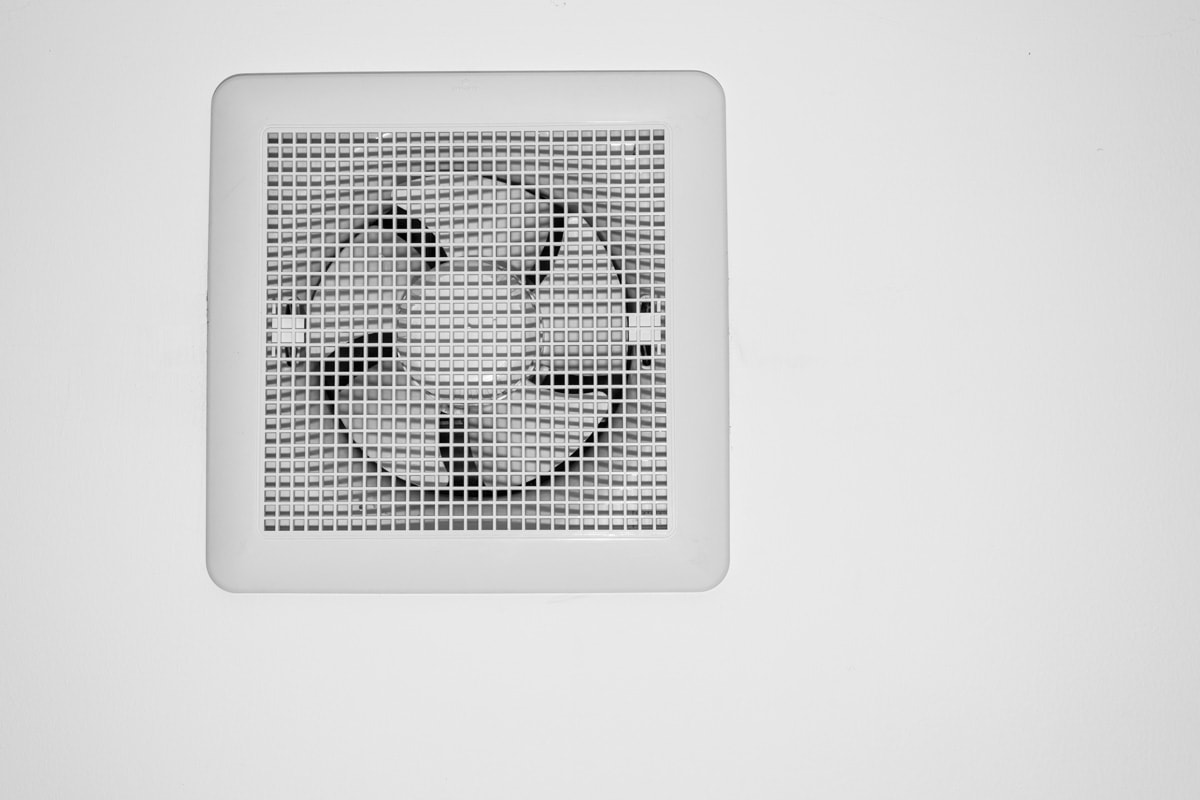 This is the answer if you consider placing your exhaust fan somewhere else except over your shower. Here are some suggestions of where you should position them:

Opposite To The Source Of Dry Air

The dry air from the outside replaces the exhausted air from your bathroom. This source is its vent through a wall that leads outside your home or your house's roof.

After finding where you'll vent the fan, place the fan opposite to where it is. Doing this will create a cross breeze that helps remove the moisture, odors, and steam from your bathroom more efficiently.

Closest To Its Vent

You can also put the fan as close to the vent as possible. Doing this will ensure a short route for venting the air from and to your bathroom. If your fan is too far from its external vent, it will affect its performance. It will take longer before the air from your bathroom is exhausted and replaced.

Your exhaust fan can get the moist air out of your bathroom effectively if it's close to the shower. Usually, you should install it about one foot away from your shower.

Most bathrooms typically have a shower and the door facing each other, so you can place the fan between these.

Where There Are No Obstructions

You will need to create a hole to install your exhaust fan. That's why before you do so, it is crucial to ensure that there are no present wires, joists, or other ducts present. Not doing so may cause you to accidentally cut or damage things you don't want to.

How Do You Install An Exhaust Fan In A Bathroom? 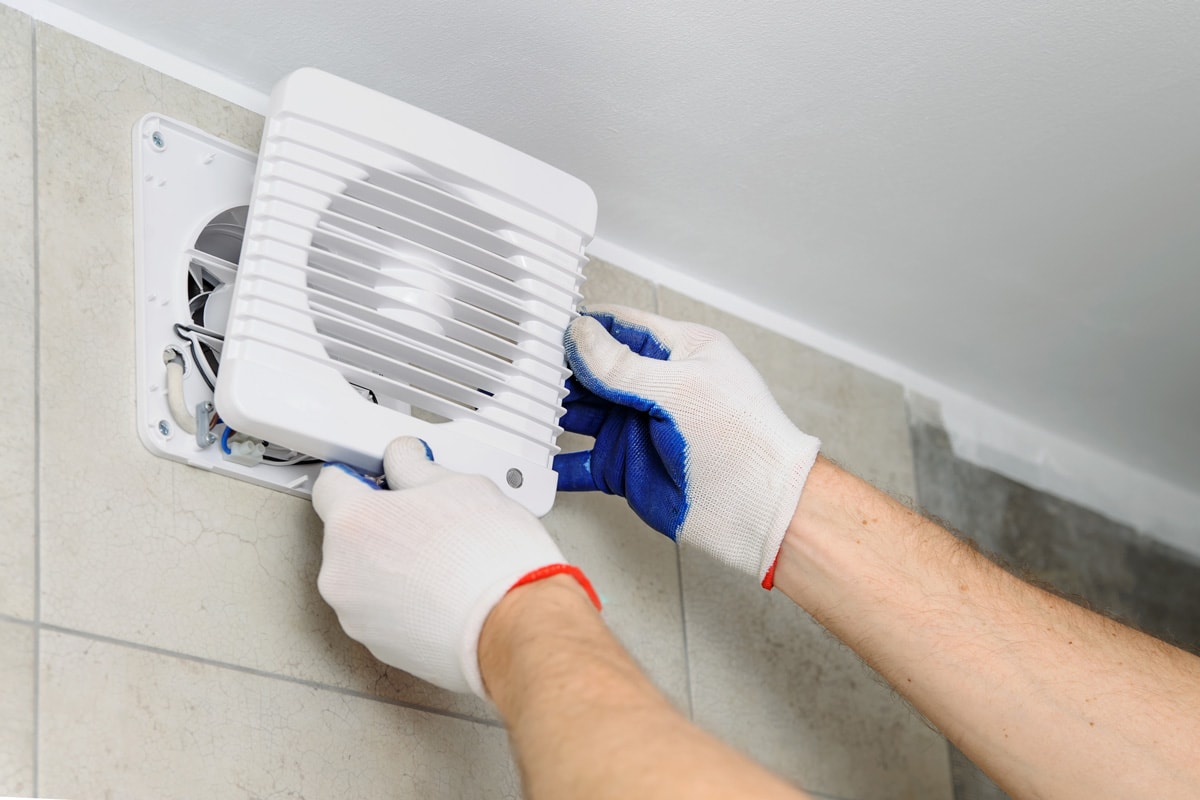 After determining where to put your exhaust fan, it's time to install them. Here's a guide to help you:

Before starting the installation process, check if you have the right exhaust fan size. To calculate its correct size for a bathroom less than 100 square feet, multiply the length and width of your bathroom. Then, the answer you get after multiplying the two will be how many cubic feet per minute [CFM] your exhaust fan must have.

But, if your bathroom is more than 100 square feet, you should use this guide instead:

2. Have A Power Source 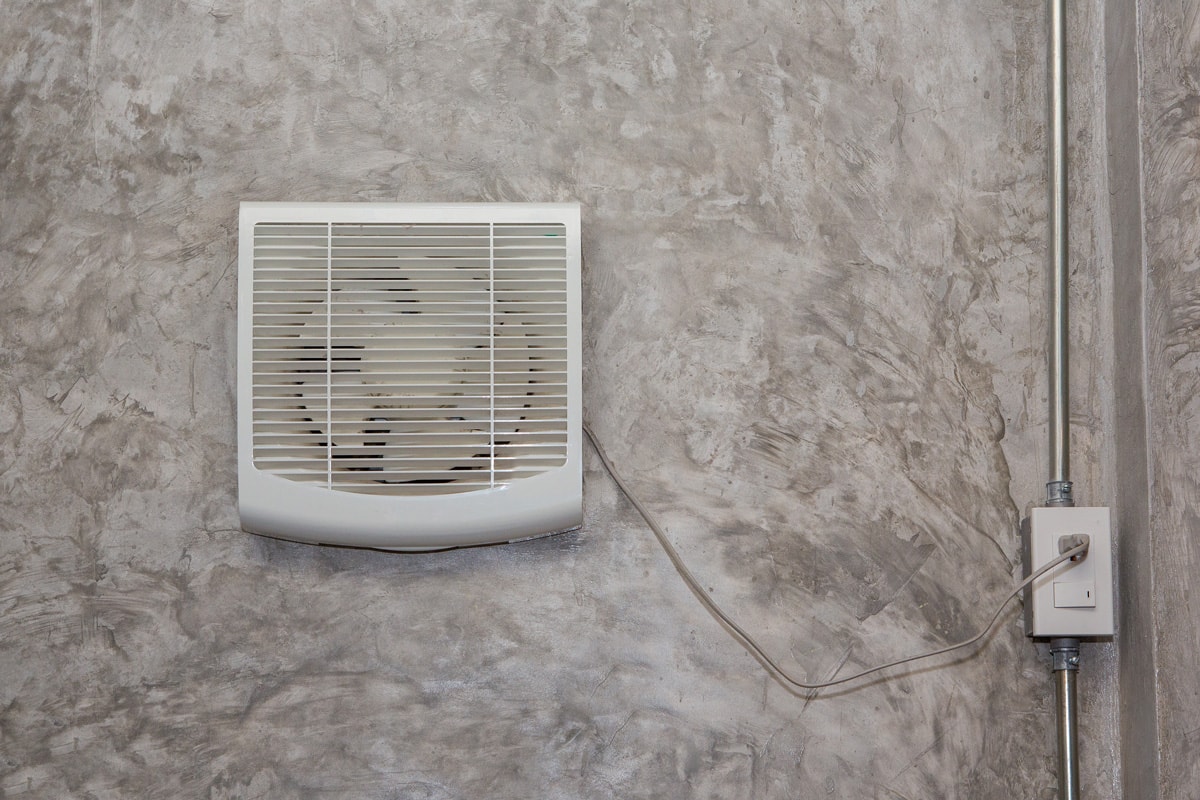 Your exhaust fan needs some power to run. You may have it share a power source with your bathroom lights or remove your lights and use an exhaust fan with a light attachment instead so you can use its power source.

But you can also provide another new circuit just for your exhaust fan by running a cable on your ceiling.

See this power cord on Amazon.

3. Make A Hole For The Vent

Before you can drill a hole to install your exhaust fan, you must ensure that you have a vent location near it. After finding the ideal place, drill a hole at its center. It can be either on the wall or your house's roof. Then, do these:

Click here to check out this silicone caulk on Amazon.

4. Make An Opening For The Exhaust Fan

First, mark the area where you'll install the fan. If the fan has a paper template, you can use this as a guide. Meanwhile, if your exhaust fan has none of this, use the fan's housing as a guide instead.

Then, use a jab saw to cut where you've marked.

See this jab saw on Amazon.

5. Screw Your Exhaust Fan Housing To The Joist

One of you should bring a flashlight, a cordless drill, screws, and the exhaust fan's housing to the attic. Then, the other one should check the fan housing placement from the bathroom. After, follow these:

Tap here to see this cordless drill on Amazon.

6. Connect The Fan To The Vent

7. Put Your Fan To Its Housing 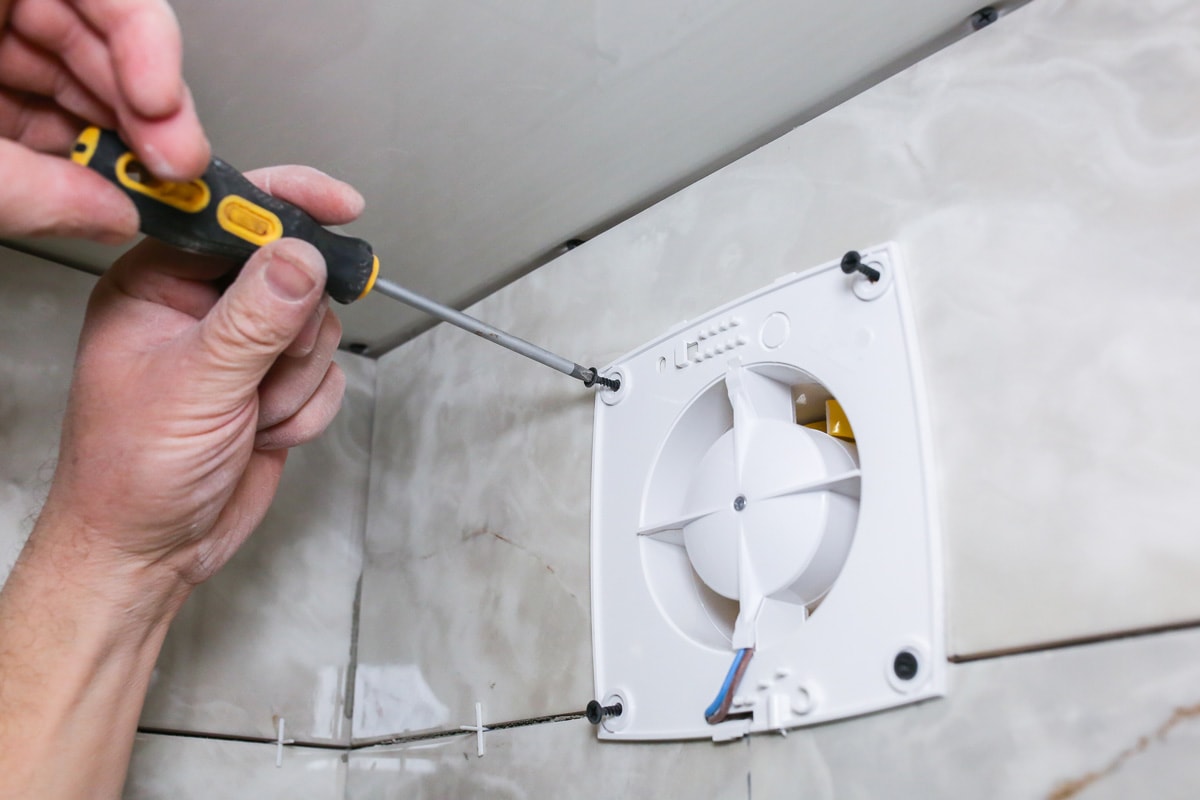 Each exhaust fan models or brands have different instruction to insert the fan into their housing, so follow this instead. Then, strip the ends of the fan's electrical wires to hard wire them to the electrical wire you extended earlier.

A bare or green wire is usually attached to the side of the housing for grounding, so make sure it is also attached.

After, put the fan grill to face the exhaust fan's housing. You can then try turning on the fan.

There are exhaust fans that you can install over a shower. Specifically, these are fans protected by GFCI and are shower-rated. If your exhaust fan does not meet this requirement, do not place it over your shower as it can pose a danger from electrocution or may damage the fan.

On the other hand, though it's safe to put your exhaust fan over a shower, you should still consider the possibility of having chilly showers, having it exposed to water regularly, and condensation dripping because of its placement.

Did you learn everything you need to from this post? Add more knowledge by reading these articles about bathroom exhaust fans:

How To Insulate A Bathroom Exhaust Fan

What Is The Best Oil For An AC Vacuum Pump?

How To Clean A Vornado Fan

How To Reset A Trane Electric Furnace

Why Is My Cadet Heater Fan Not Working? [And How To Fix The Most Common Issues]

RadonSeal Vs Drylok: Which To Choose?