Sometimes, figuring out the best way to light your home can be tricky. Do you want to try putting LED lights into your ceiling fans but don't know whether or not that's okay? Well, we've done plenty of research and have the answer waiting here for you.

Depending on a fan's configuration, there is a chance you'll be able able to use LED lights. Typically, as long as your fan is attached to a toggle switch, LEDs will be safe to use, although it's best not to mix them in with incandescent bulbs. LED lights work differently than CFL/standard bulbs, so it's best to choose one or the other for your fan's lighting.

As we begin, we will cover all things ceiling fans and discuss how you can use LED lights in yours. Whether you want to be more eco friendly or love the way bright LEDs look, we're here to offer some help. With that said, let's dive into this post! 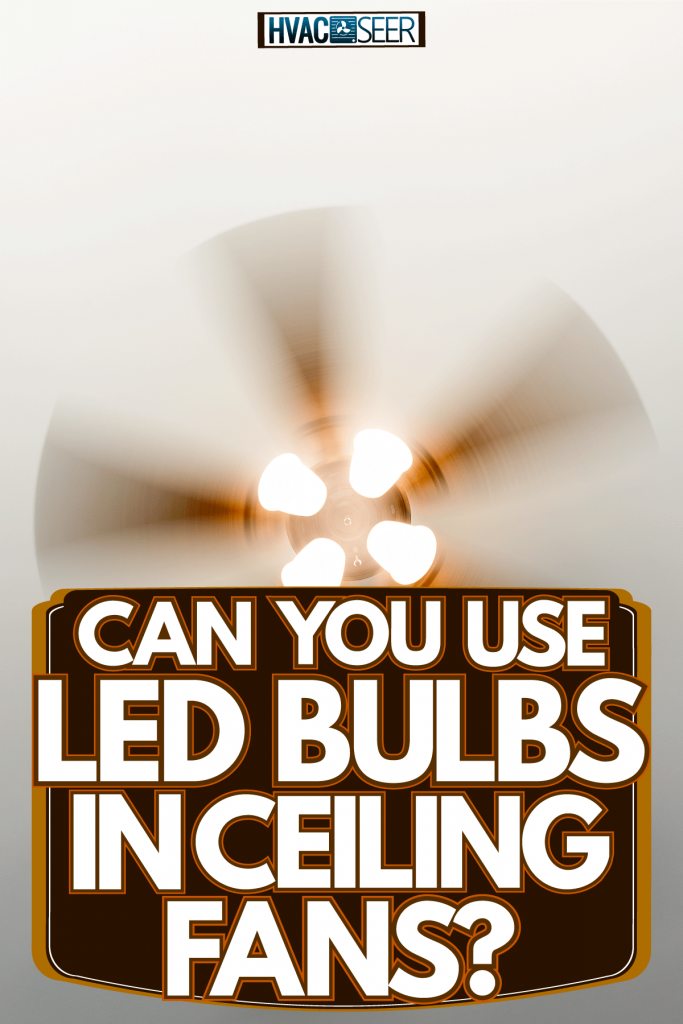 A ceiling fan will often require a specific kind of light bulb. This is usually a candelabra or intermediate bulb, although some newer fans may use mini candelabras.

Many ceiling fans also take lighting with an E12 base or even a Viva PLS 13.50, so it's best to check your fixture's user manual before installing your new bulb. 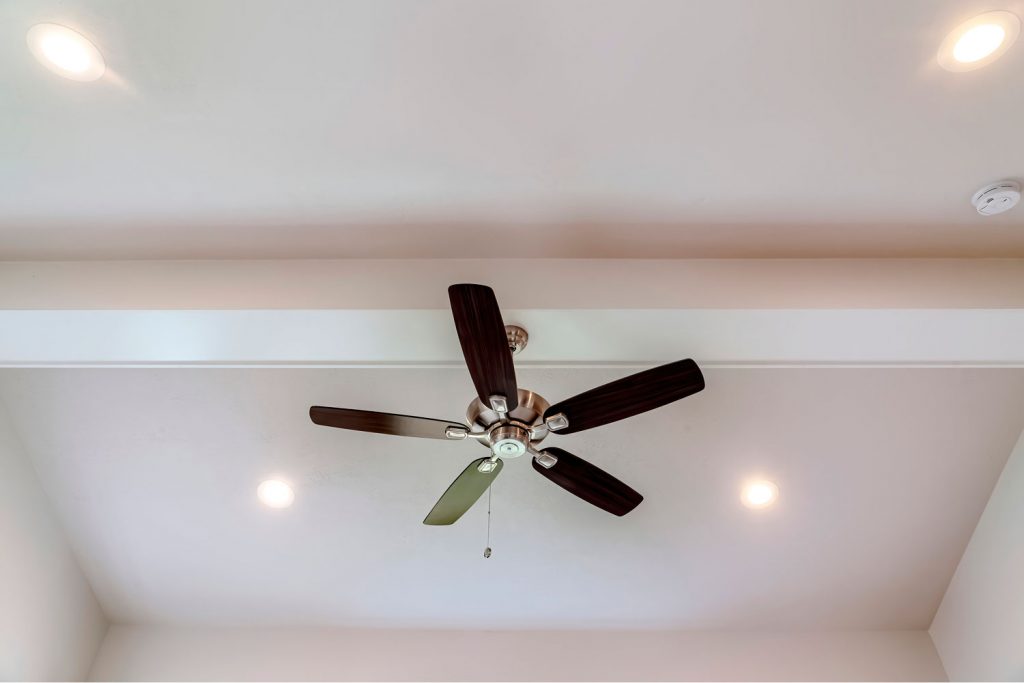 Again, you can sometimes get away with using a different type of light as long as it's the same size, but it's usually best to use the same bulb for replacements.

Can You Put Any Light Bulb In A Fan?

No, you can't put any light bulb into a ceiling fan. In general, you want to check the bulbs that initially came with your fixture and find the same type or something very similar for a replacement.

That said, as long as a fan is attached to a toggle switch or operates with a pull chain, you can probably get away with an LED bulb.

Why Won't LED Bulbs Work In My Fan?

For anyone with a fan that won't take LED lights, this is because you have other non-LED bulbs in your fan, or it doesn't operate using the same technology often found in LED lighting.

This won't usually be the case for newer ceiling fans, although it is possible depending on the design of your fixture. Again, you will see either a candelabra or intermediate bulb in a standard ceiling fan, so if you can find an LED option for these, it should be okay to use in your fan.

Can I Replace A CFL Bulb With An LED Bulb?

As long as your LED replacement bulb is the same size as your fan's current CFL, it is okay to make the switch. As we covered earlier, ceiling fans should only have one type of lighting at a time, meaning you should either have all CFLs or all LED bulbs.

You want to make sure the replacement LEDs you purchase are the correct pin type so they will fit into your fan and operate, so that's something to be mindful of.

What Size Light Bulbs Do Ceiling Fans Use? 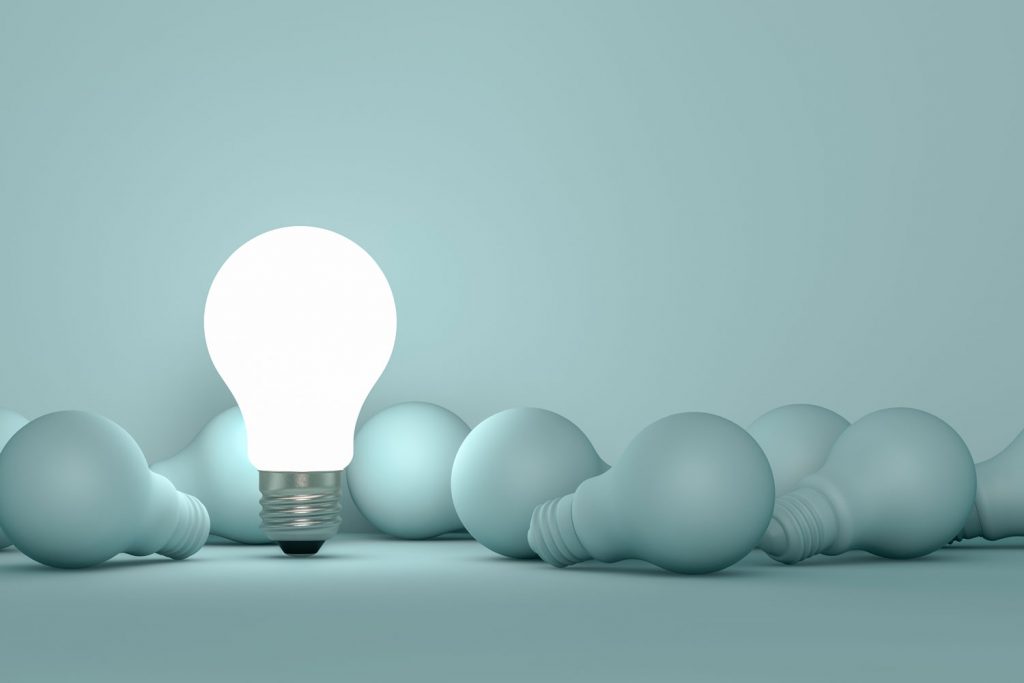 Usually, ceiling fans will use candelabra, mini candelabra, intermediate, or medium bulbs. Again, this sizing will vary depending on the configuration of your fan and whether it fits one or multiple bulbs, so each one will be different.

For newer fixtures, you should mainly see candelabra-sized lights, so as long as the LED you purchase has the same dimensions, it should be safe to use as a replacement. However, older fan designs tend to use medium light bulbs over anything else which can be harder to find LED replacements for.

How Do I Know What Size Bulb I Need?

For those having trouble finding the correct replacement bulb for their ceiling fan, this isn't as hard as it seems. As mentioned, there are four main types of light sizes for fans, so chances are you'll be dealing with either a candelabra, mini candelabra, intermediate, or medium option.

Light bulb sizing is determined by the maximum overall diameter (MOD) of the bulb's shell, meaning your replacement should be around the same shape/size as your current bulb. Sizing is also typically represented in eighths of an inch, so that's an easy way to figure out your measurements.

Can You Put Dimmable Bulbs In A Ceiling Fan?

Unfortunately, it's not usually a good idea to use dimmable bulbs in a ceiling fan. Besides potentially making your fan louder, having dimmable lights in a ceiling fan can cause premature wear on its capacitors and the motor.

A ceiling fan will often have a 120-volt AC power source, and dimmable lighting can use much more than that, which isn't good for your fan long term.

Can You Put A Higher Watt Bulb In A Ceiling Fan?

Like dimmable bulbs, it's also not recommended to use higher watt lights for your ceiling fan. In general, lights with too high of wattage won't work in your fan and might even burn out if you try to turn on your fixture.

Luckily, LEDs don't produce much heat, so if you use a bulb with 5-10 more watts than the recommended amount, you aren't at high risk for an electrical fire or other major problems. Again, it's always best to use the same size/watt bulb for your fan regardless of whether it's LED or not.

How Do I Make My Ceiling Fan Light Brighter? 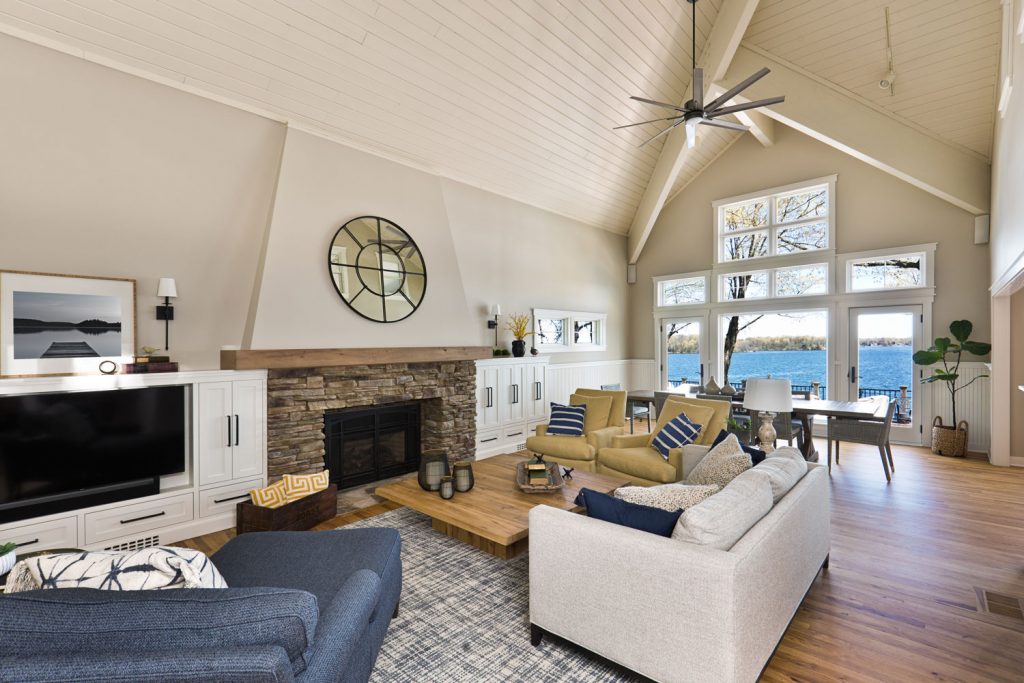 If your ceiling fan isn't bright enough for your space, there are ways to make it brighter. First, we recommend switching to an LED bulb which will be brighter than a standard CFL option.

You can also try switching out your current bulbs for white lights rather than anything too warm, which should help to brighten things up. As mentioned, you don't want to mess with wattage in your fan, so try to look for higher lumens/output.

How Bright Of A Light Should You Use In A Ceiling Fan?

In terms of brightness, you want to choose a bulb with a high lumen output (800 and above) for your ceiling fan. Not only will choosing a light with higher lumens brighten your fixture, but it should also cover more space down below.

A standard 60-watt incandescent bulb won't be bright enough to light an entire room, so this might be a good time to consider an LED option instead.

How Do I Choose A Light Bulb Color?

When it comes to choosing the right color for your light bulbs, this ultimately comes down to preference. Especially with LEDs, there are endless amounts of hues to choose from, so your decision needs to make sense for both your style and home.

Typically, light bulbs will fall on the Kelvin temperature scale, ranging from ultra warm to white and bright. Overall, we recommend whiter, brighter bulbs for a ceiling fan considering how far it is from the floor, although you can certainly try using a warmer option.

What's The Difference Between Bright White And Daylight Bulbs?

If you're debating between using bright white or daylight bulbs for your fan, this will come down to how severe you want your lighting to be. Bright white bulbs tend to have blue tones similar to those in an industrial building or hotel bathroom, so they aren't for everyone.

On the other hand, daylight bulbs will have a more blush tone and are best for working, reading, or even doing your makeup.

Why Do My LED Lights Flicker In My Ceiling Fan? 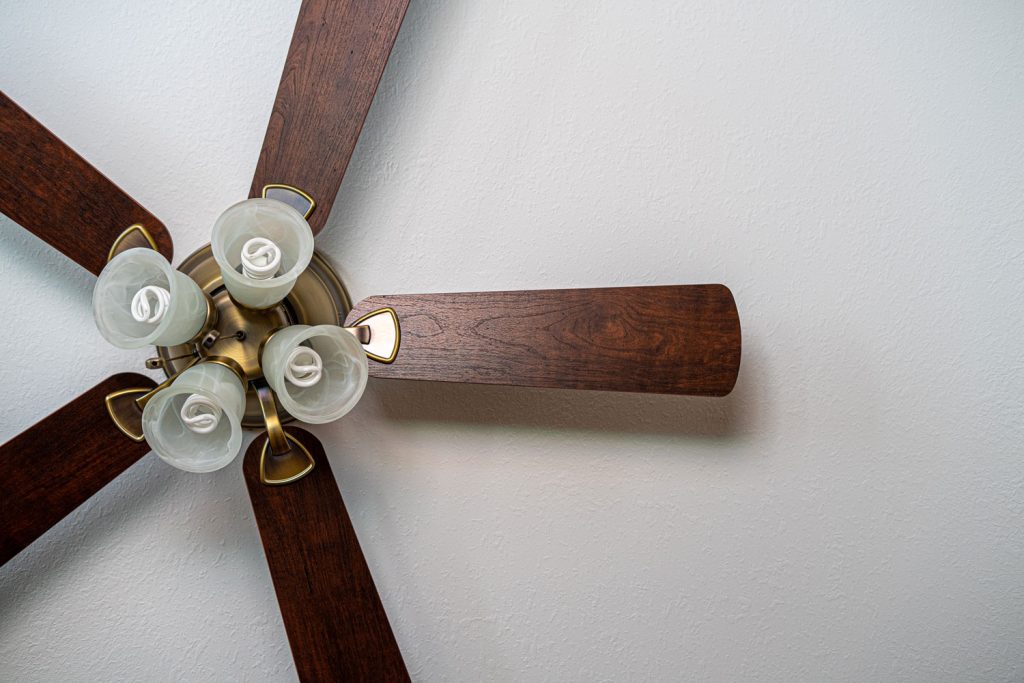 If you start to notice the LED lights flicker inside your ceiling fan, this is most likely because there is a loose connection or circuit. Usually, a non-compatible dimmer switch is to blame, which means you need to either find an LED-friendly option or switch back to regular bulbs.

As mentioned, dimming light bulbs can wear out a ceiling fan's motor and capacitors which means more frequent repairs and even a broken fixture, so they aren't usually worth it.

Is It Worth It To Put LED Lights Into A Ceiling Fan?

Overall, we would say that using LED lights in a ceiling fan will be worth it. Besides being a more eco-friendly option, LED bulbs are safer than traditional lights and won't produce much/any heat inside your fixture.

Again, not every ceiling fan will be compatible with LED lighting, so we recommend reaching out to your fan's manufacturer before finding a replacement light bulb. 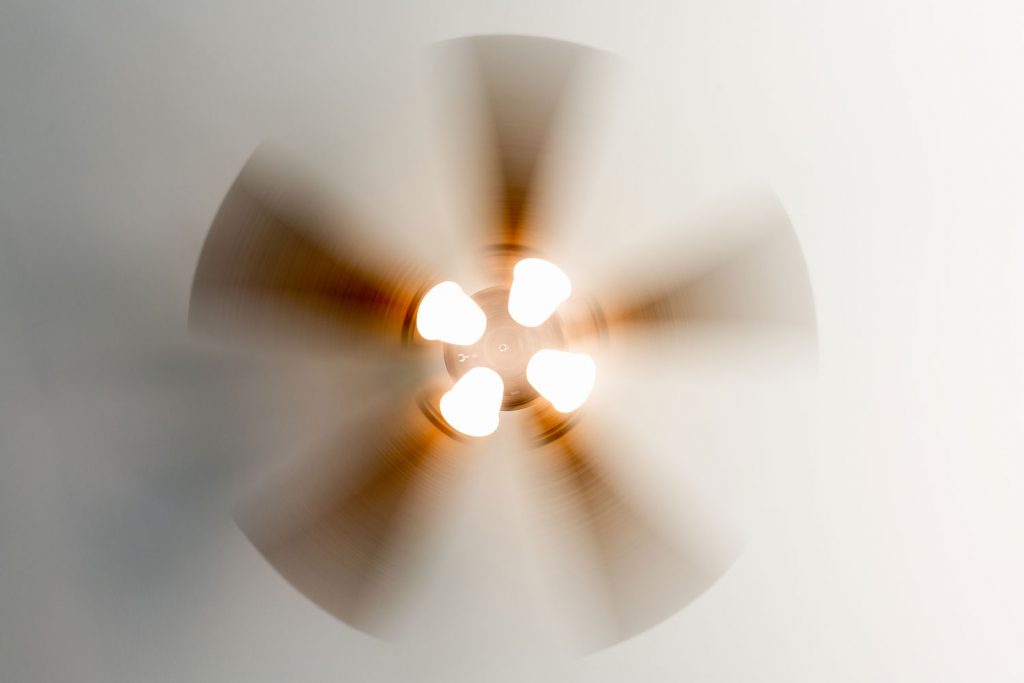 Whether you want to switch all of the lights in your house to LEDs or need replacement bulbs for your ceiling fan, knowing what lights will work can be tricky. You can certainly use LEDs in a ceiling fan as long as it's attached to a toggle switch or has a pull chain design.

Choosing LED bulbs might also allow you to have a brighter fixture, so that's another great reason to make the switch. Regardless, don't forget to find lighting that works for you and your home, and try to stay within the recommended wattage and size no matter what type of bulb you end up getting.

Before you go, be sure to check out these helpful HVAC posts below:

How To Turn On A Ceiling Fan Without A Remote

How To Install A Ceiling Fan On A Sloped Ceiling

Can You Put A Ceiling Fan On A Vaulted Ceiling?

Mysa Thermostat Vs. Nest: Which Should You Choose?

How To Clean Humidifier Without Vinegar [Step By Step Guide]

Bryant AC Making Loud Buzzing Noise – Why And What To Do?

H2 On My Mysa Thermostat – Why And What To Do?

Can You Tap Into Existing Ductwork For Basement Heat